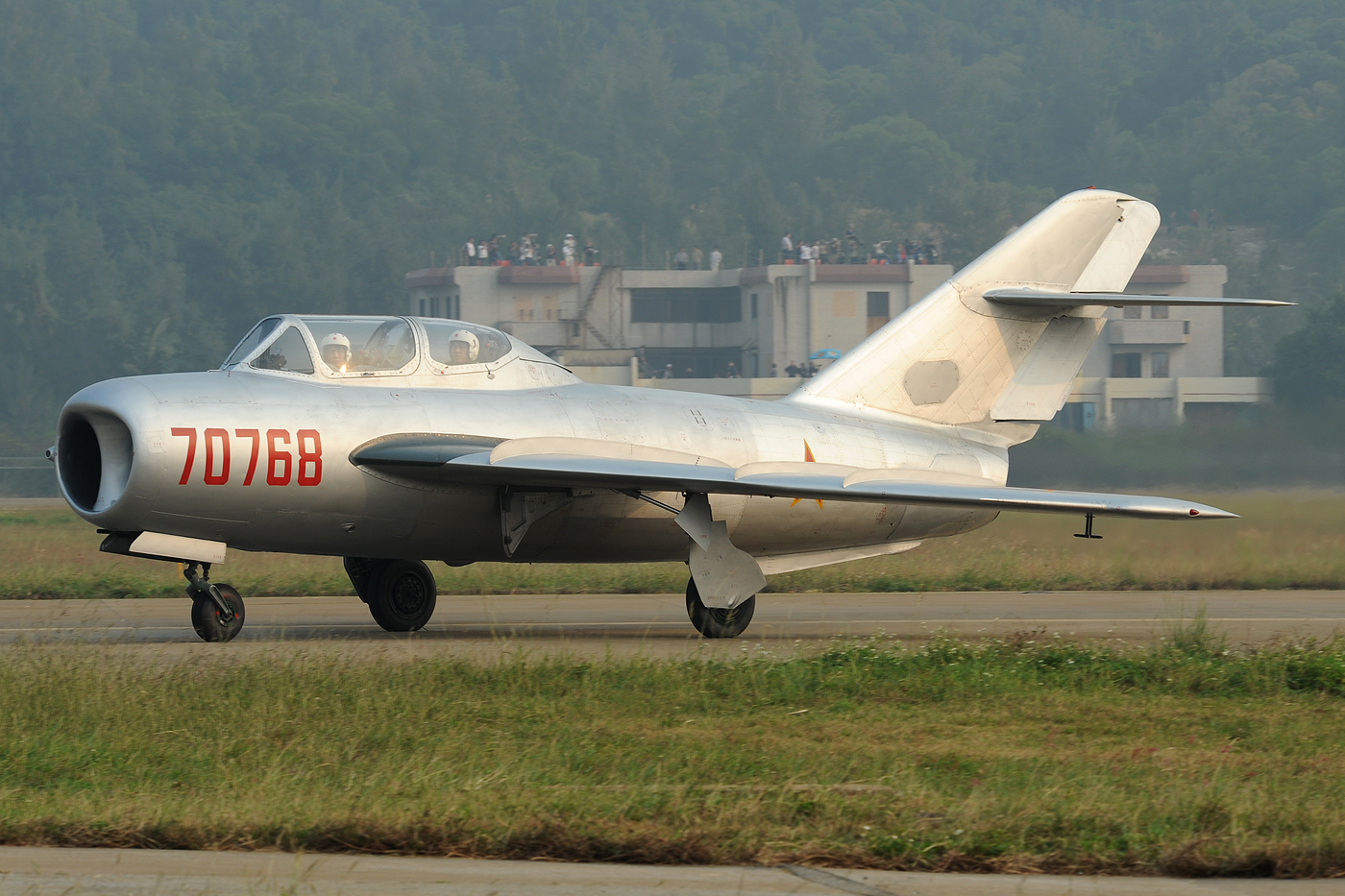 About the Shenyang J-5

In 2019, the People’s Republic of China celebrated its 70th founding anniversary in Taineman Square with a flyby of over 160 military aircraft, including squadrons of the advanced Chengdu J 20 5th generation stealth fighter jets known as the Mighty Dragon. However, missing from the parade was an important piece of history that laid the foundation for China’s remarkable development of its home-built fighter jets capable of competing with fighter jets from top-tier militaries.

Here is the story of the Shenyang J-5 fighter jet (Jianjiji-5 – fighter), the unsung hero of China’s earliest attempt to kickstart its domestic fighter development program.

The Shenyang J-5 fighter jet was a licensed production of the Soviet MiG-17F. An air superiority, air defense, and close air support fighter jet with a sweptback wing design powered by a single centrifugal-flow turbo-jet engine with an afterburner capable of 994.9 knots (Mach 1.4). Built in the Shenyang Aircraft Factory, the Shenyang J-5 shared similar design traits with the MiG-17F, including a distinctive nose air intake.

Production of the J-5 prototype started (designated Type 56) at the Shenyang Aircraft Factory in 1955, with Chinese officials working closely with MiG engineers in what was then China’s most advanced manufacturing project. The Shenyang J-5 fighter jet was a logistics and technical nightmare consisting of 253,550 parts in 14,719 different materials and production methods with 228 vendors delivering various equipment.

MiG Aircraft licensed the MiG-17F WP5 engines for production in a different factory, the Shenyang Aero-Engine Factory. Engine production went on simultaneously with aircraft manufacture, and whenever a Shenyang J-5 airframe left the machining shop, it had a WP5 engine waiting to be fitted. Also, Soviet and Chinese authorities produced all the cockpit equipment and flight instrumentation concurrently or in advance of each aircraft manufacture. The arrangement significantly sped up the Shenyang J-5 fighter program’s development process. 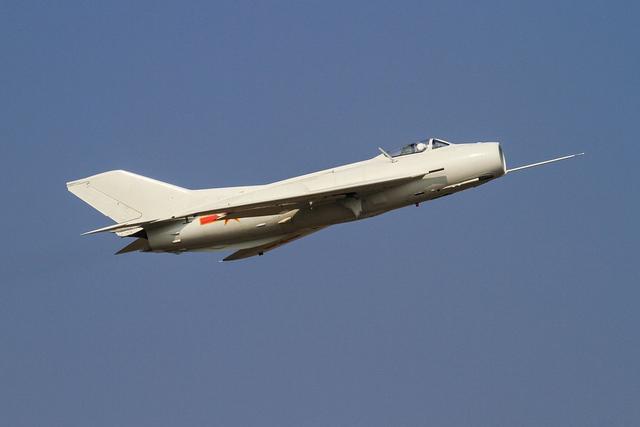 On 13 July 1956, the Type 56 prototype (serial number Zhong 0101), built with all-Chinese components, rolled off the assembly line. It made its first flight six days later with Chinese test pilot Wu Keming. Type 56 completed its final flight tests on August 2, 1956. The State Certification Committee certified the Shenyang J-5 fighter jet for mass production and delivery to the Air force a year and five months ahead of schedule.

The development period of the Shenyang J-5 fighter jet from prototype production to test flight completion was a year and four months, one of the fastest fighter jet programs in history. Initially designated Dongfeng-101 (East Wind 101) before its eventual designation as the Shenyang J-5 in 1964, 767 single-seat units were built between 1956 and 1959. Chinese authorities concluded plans to license the production of the MiG-17 PF interceptor as Shenyang J-5A in 1961. But the Sino-Soviet split delayed the eventual output of J-5As and test flights until 1964, by which time they were already obsolete. However, over 300 Shenyang J-5A fighter jets rolled off the assembly line and remained in service until 1992.

Sporting a typical design of early fighter jets, the Shenyang J-5 fighter has a single-seat, single-seat configuration with a 45O swept-back wing angle of double-spar construction. Pilots can control the wing’s retractable flaps at an angle, with an aileron deflection range of ±18°.

Since the Shenyang J-5 fighter jet is a license production variant of the MiG-17 fighter jet, it shares a similar external fuselage design and construction. Its streamlined body is an all-metal semi-monocoque with a circular section, a distinctive nose air intake, and a steerable speed brake fitted to the rear fuselage.

The Shenyang J-5 fighter jet’s split vertical tail has a sweep angle of 55O41’ with a movable upper section while the lower half is secured to the aircraft’s rear fuselage’s load-bearing frame. The Shenyang J-5 fighter horizontal tail located on the lower section of the vertical tail has a swept angle of 45O, the elevators have a 32° upwards and 16° downwards rotation, and the rudder has a 25O turn angle.

Several pilots commented on the Shenyang J-5 fighter jet’s excellent taxiing capabilities, thanks to its three-point retractable landing gear.  All three landing gears have a single wheel, the nose landing gear has shock absorbers and sway dampers, and the main landing gear, which retracts into the wings, has buffers.

Safety features like hot ejection pilot seats are standard on the Shenyang J-5, and the sealed solo pilot cockpit construction can be jettisoned during an emergency.

The Shenyang J-5 fighter jet has a maximum speed of 610 knots at 16,000 feet, with the single WP-5 engine delivering a cruise thrust of 4,761 lbf. The aircraft has an endurance of 2 hours and 50 minutes (969 miles) with a full fuel tank and two 105 gallons external drop tanks.

According to the statistics released by the Chinese government, the Shenyang J-5’s performance is impressive by today’s standards for an aircraft size. Fully loaded with fuel and ammo, the Shenyang fighter jet has a take-off speed of 146 mph and an average landing speed of 111 mph. Its take-off distance is 179 ft, and its landing distance is 251 ft.

Although modern pilots may be quick to dismiss the Shenyang J-5 fighter as a crude relic after a brief glance, the advantage of sharing the technical platform with one of the best fighter jets of the Cold War becomes evident once the aircraft is airborne.

Information on the operational use of the Shenyang J-5 by its various operators is hard to come by, and verified accounts of the aircraft’s engagement with hostile fighter jets are rare. However, there are scattered accounts of Shenyang J-5 fighter jets engaging U.S Air Force F-4Bs between 1965 and 1967, resulting in the downing of one F-4B from friendly fire.

According to other accounts, a Peoples Liberation Navy Shenyang J-5 shot down a Martin/General Dynamics RB-57F Canberra reconnaissance aircraft. However, Chinese authorities provided no other details of the aircraft identification or the location.

The most detailed account of the Shenyang engagement with enemy aircraft occurred in 1958 when ‘a J-5 formation’ was suddenly besieged by 24 F-86s from the Taiwan Air Force over Wenzhou, Zhejiang resulting in a loss of a Shenyang fighter jet flown by Wang Zizhong, and two Taiwan Air Force’s F-86s.

Several Shenyang J-5 fighter developments, including export versions with the FT designations, between 1956 and 1969 when the Shenyang Aircraft Factory ceased production.

The Shenyang J-5 fighter jet’s primary firepower consists of two different cannons with separate ammo types. Mounted underneath the forward port side are twin 23-1 23mm cannons with a 200-round reload capacity and a fire rate of 800 rounds/min. The aircraft’s starboard forward side has a single 31-type 37mm cannon with a fire rate of 400 rounds/min. Pilots can also carry two 100-250 kg mounted underneath the wings.

The efficiency of the Shenyang J-5 firepower guns is severely limited because the gun sights of the two powerful cannons can not be coordinated. Shooting distance is only accurate to 400 meters, but pilots often have to get within 300 meters of the target to secure a hit, risking being shot down or hit by the target’s explosive fragments. In comparison, the F-86 Sabre 6 12.7mm cannons have a superior shooting distance of 1,000 meters.

Current and previous operators of the Shenyang J-5 fighter jet include:

Similar aircraft to the Shenyang J-5