How to Legally and Safely Take Down a Drone

Drones are an all-pervasive presence in our lives. They have come a long way from being novelty Christmas gifts for geeky teenagers to sophisticated flying vehicles with endless commercial and recreational applications. Public fascination with drones has increased over the years, with over eight hundred and fifty-three thousand recreational drone registrations and three hundred and eighteen thousand commercial drones registered in the United States as of 2022.

Drones can be a helpful tool or a nuisance, and their widespread acceptance has resulted in their misuse by operators, mostly hobbyists and recreational drone flyers. They threaten public safety and security, compromising your expectation of privacy. Incidences of unauthorized drones flying in restricted airspace are common. Several major airports around the globe have been forced to shut down due to the danger of drone collisions with airplanes. 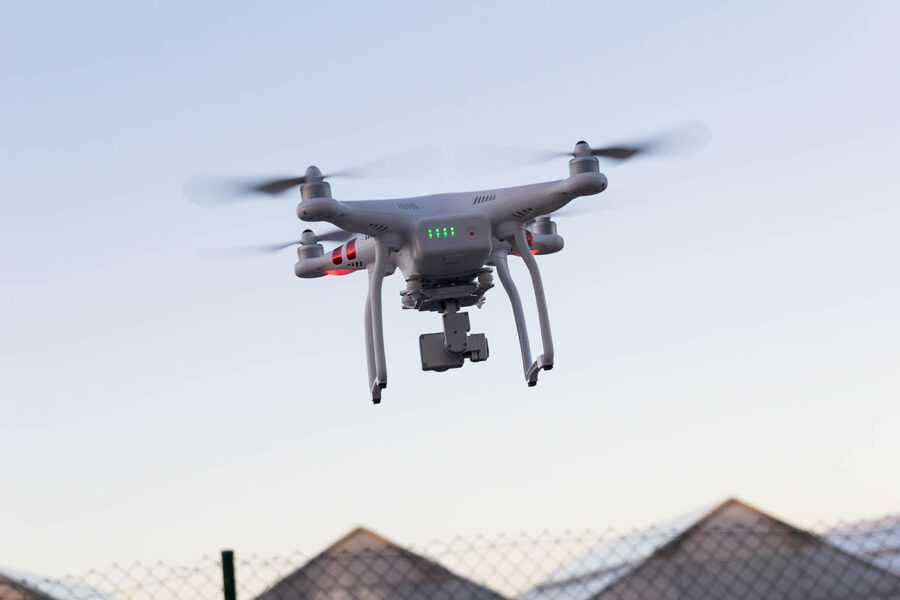 In the United States, there are laws allowing government agencies to use counter-drone technology to bring down stray drones flying inside restricted areas. But private citizens who wish to go drone hunting should understand the possible criminal implications and civil liabilities associated with bringing down and damaging a drone belonging to another individual.  The Federal Aviation Authority FAA classifies all types of drones as unmanned aircraft, and according to Title 18 US Code 32, destroying an aircraft is a federal crime.

However, there are still legal ways to get rid of drones, and we have written this guide on how to take down a drone without getting a federal felony indictment and endangering public safety. We also have answers to several of your questions regarding what you can or can not do concerning unauthorized drones spying on your family and property.

Legal ways to take down a drone

Several readers might chuckle at suggesting that calling the cops can bring down an unmanned aircraft, but it is the most effective and less intrusive method. The police can determine whether the drone flying over your property violates relevant local and federal laws, confiscate the drone if necessary, and help collect evidence for prosecuting the drone operator in court.

Federal Aviation Administration FAA regulations require drones in the United States to have an FAA number. They maintain a database containing drone operators’ personal information, which local law enforcement authorities can access to identify and prosecute drone owners. If the police do not have the tools to bring down a drone safely, they can request the help of the Department of Homeland Security DHS or the Department of Justice DOJ, empowered by the 2018 FAA Reauthorization Bill to interdict and safely bring down a drone.

Remember those old gladiator movies where a fighter throws a weighted net over his opponent to trap him? A net gun works similarly by releasing a net encapsulating a drone mid-flight, trapping, and forcing down. Net guns do not have a firearm classification, and you can legally discharge one at a flying drone without significant criminal liabilities. However, you may be liable for damages to the drone, including collateral damage caused by the drone crashing into properties or on people. Net gun devices may be shoulder-mounted and are effective against any drone type when fired within 40 feet of a flying drone. Basic net guns are inexpensive handheld devices that anyone can operate but have reduced accuracy. More advanced net guns with automated targeting software showing distance and aim accuracy are more expensive and must be handled by a trained professional. 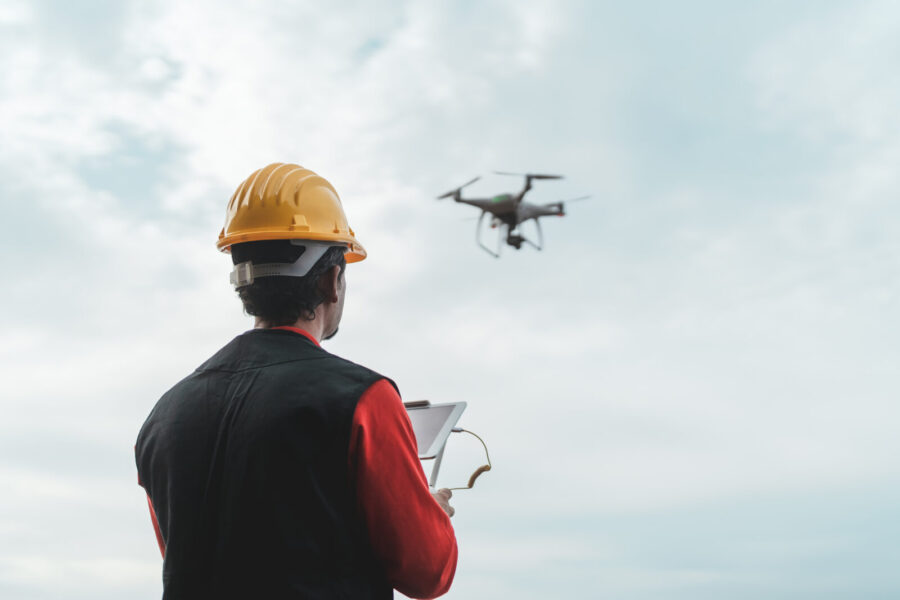 Deploying birds to take down pesky drones is a unique and legal method for bringing down an authorized drone without harming bystanders. Although drones snatching other drones out of the sky may look awesome. Experts can train large birds of prey to grab drones in mid-flight, bringing them to their handlers. Law enforcement authorities in countries like Holland are working with falconers to train eagles as anti-drone weapons. Although there are concerns about the possible harm to the birds, several organizations are researching the potential impacts on the bird’s talons and protective measures. You can hire the services of an anti-drone bird trainer to take down an unauthorized drone on your property, depending on your location.

Although it is illegal in the United States to jam radio frequency (RF) signals, civilians can legally deploy radio frequency (RF) sensors to intercept the control signals transmitted between the drone and the ground controller to reveal the position of the operator, provided you are not interfering or jamming the signal. You can then relay the identity of the drone operator to the police, who may arrest the individual or confiscate the drone. Taking down drones with radio frequency (RF) analysis eliminates criminal or civil liabilities for you, and it is a cost-effective technique. However, it is ineffective against tiny drones or autonomous unmanned aerial vehicles.

Aiming water cannons at an unauthorized drone is a nonlethal method for bringing down programmed and recreational drones. In 2016 the US Air Force Research Laboratory successfully intercepted an Immersion Vortex 250 drone using a water cannon, forcing it to crash. However, the type of marine-grade fire fighting water cannon used for the US Navy demonstration is unavailable to civilians. Several companies are developing handheld water cannons capable of discharging powerful water jets over ten meters. The legality of using water cannons against drones is open to debate, and you may have to find out what your local laws have to say on discharging large volumes of water.

Is it legal to shoot down a drone?

It is a federal crime to fire a weapon at a drone in the United States – even if it is flying over your property or taking intimate footage of your family. Additionally, state and local authorities have laws against firearms’ reckless discharge, which can carry significant jail time, including fines. By law, drones operating within the national airspace are regarded as aircraft by the FAA, which fought in the courts to get that provision inserted. And they will take kindly to anyone shooting live rounds into the air for any reason. Thus, drone shooters will face similar penalties as individuals who shoot down airplanes.

Is it legal to jam a drone signal?

The United States government frowns on private individuals interfering with radio communication signals and prohibits selling and using equipment designed to interfere with or jam radio signals, including the flow of radio signals between a drone and the controller. You will also violate the United States Criminal Code 18 U.S.C Section 1362 and 1367, which prohibits willful or malicious interference to U.S. government communications and satellite communications, including GPS or WiFi jamming, if you attempt to jam or hack a drone signal. Offenders are subject to imprisonment or fines, or both.

Any plan to jam a drone signal will most likely involve the FBI or the Department of Homeland Security, the only organizations authorized by law to take down a drone by jamming its radio signal. 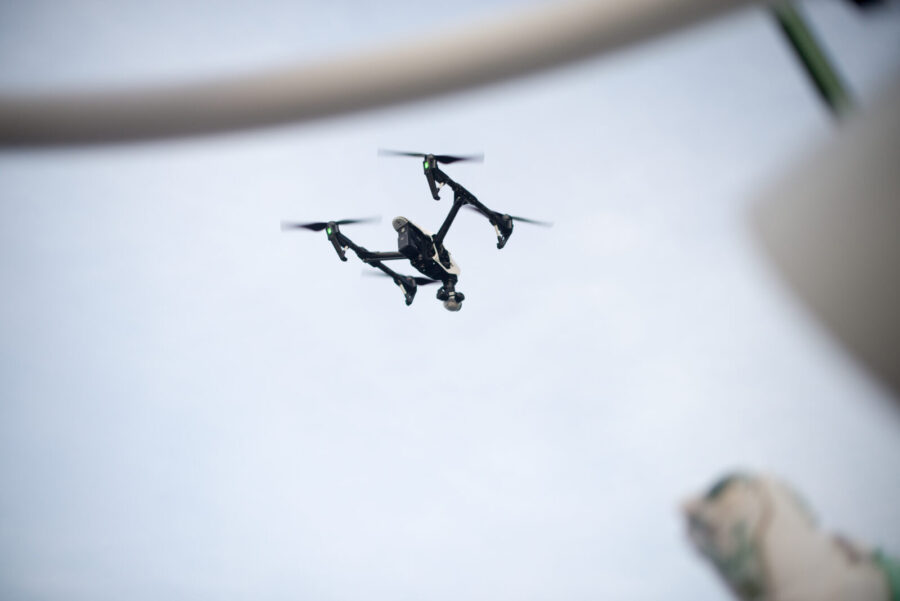 Can I spoof a drone?

U.S. citizens can not legally take down a drone by spoofing its signal because the technique is prohibited under the United States Criminal Code 18 U.S.C Section 1367. Spoofing involves using hardware or software tools to disrupt the flow of communications between the drone and its ground-based controller. But unlike jamming, which cuts-off communications to the drone, causing it to fall from the sky, spoofing allows you to take control of the drone from the owner/operator and may let you access camera footage and other information from the drone.

Only law enforcement agencies can take down a drone by spoofing its signal.

Can I disable a drone with a laser pointer?

Online stories of laser pointers disabling drones and causing them to fall from the sky are an urban myth because consumer-grade laser pointers can not jam a drone’s communications and are not powerful enough to damage their hardware. You will also commit a federal crime according to U.S.C TITLE 18 CHAPTER 2 Section. 39A, which prohibits aiming the beam of a laser pointer at an aircraft, including drones.

How can I stop a drone from flying over my property?

You can not legally prevent a drone from flying over your house or property because the FAA controls the airspace above it. FAA rules allow drones to roam freely in an unregulated airspace area limited to 400 feet above ground level. There is nothing you can do about a drone buzzing about your neighborhood unless you can prove that the drone operator is flying the aircraft recklessly in a manner that endangers public safety.

However, due to varying rules across the United States, you can take advantage of certain restrictions to prevent drones from flying over your homes. 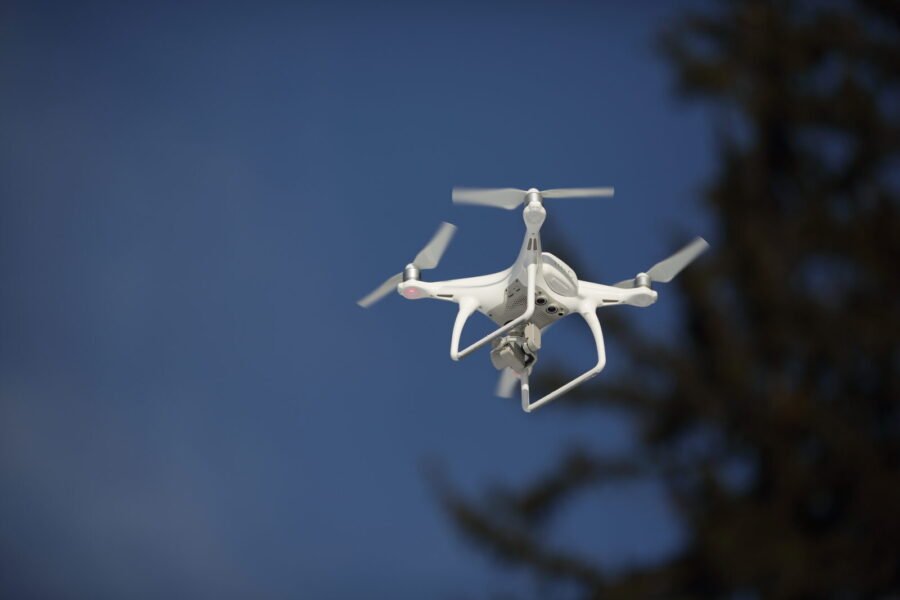 Can I go to jail for shooting down a drone?

The 18 U.S.C Section 32 says you can spend time in federal prison for up to twenty years for actions leading to the destruction of a drone in mid-air. This includes shooting down drones with a gun. Additionally, several state and local laws consider discharging a firearm in public criminal mischief, an action carrying potential jail time. There is also the problem of endangering public safety, an offense with serious legal consequences because shooting a drone may create additional hazards. For example, if a live round hits someone, the drone may fall on a person causing severe injuries and the possibility of the battery bursting into flames after impacting the ground, causing significant property damage.

When am I allowed to shoot down a drone?

You can shoot down a drone in self-defense, but only when a drone equipped with a lethal weapon is attacking you or your family members. Under normal circumstances, you may fire a gun in self-defense only if your life is being threatened, and shooting back is the only effective means of stopping the attack. Although, there have been cases of civilian drones refitted with guns or bombs successfully carrying out assassinations. Such incidents are infrequent, and it is unlikely that you will ever be a victim of an attack drone.

While there are genuine concerns about privacy issues, you must remember that not all drones are spy machines seeking to record your private moments. And be sure to use legal and safe methods if you must take down a drone. An excellent option is dialogue, and reasonably informing the drone operator of your safety concerns and privacy expectations will more likely result in responsible drone operations. If all fails, collecting all evidence of reckless drone operations and reporting them to the police is how individuals can legally and safely take down a drone without willfully or accidentally violating criminal laws.