Logitech Pro Flight vs Honeycomb Alpha: Which Flight Simulator Yoke is Better in 2021?

Both are popular options, but there are some key differences that set them apart. As we frequently receive the question which of the two is the best option, we decided to explore them in more detail and give you a nice overview of the advantages of each yoke and the key differences between them.

Let’s first look at a general overview of the differences and similarities between both yokes. After, we will go into a little more detail about some of the major differences between the two brands. 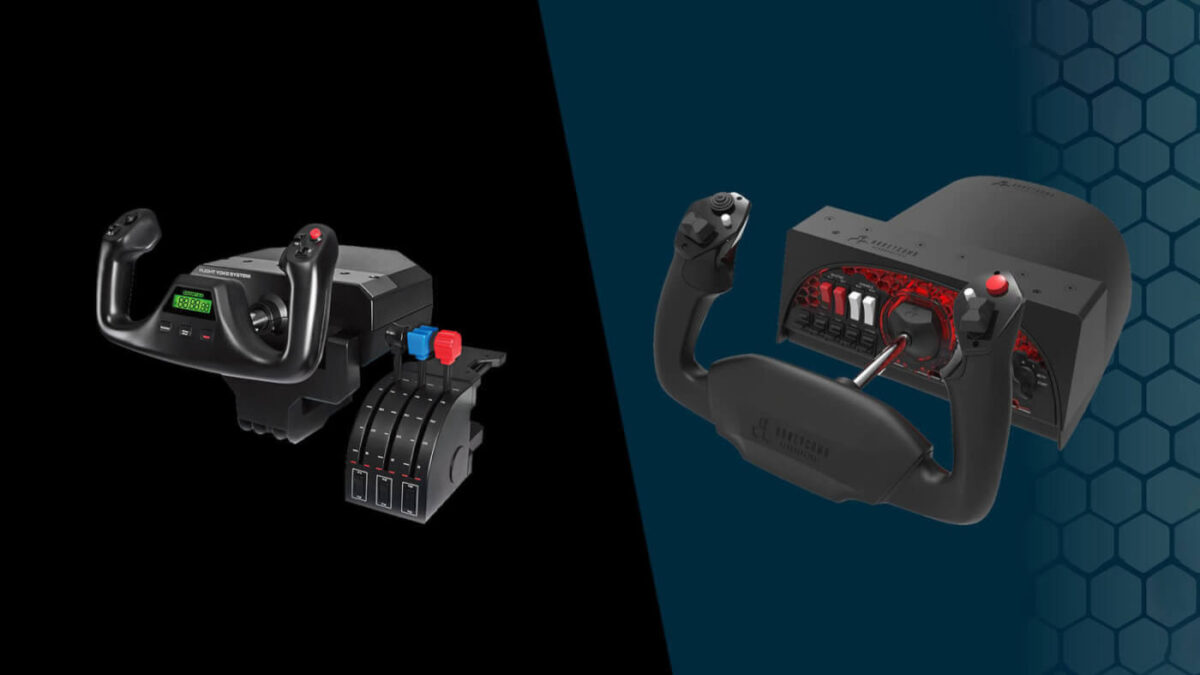 Let’s look at some of the major differences between both yokes.

First, there is the price.

At the time of writing, the Honeycomb Alpha is available on Amazon for around $400.. while it is advertised on Honeycomb’s own website for $249.99. However, the product is currently out of stock on Honeycomb’s website, so that may be the reason why prices on Amazon have gone way up.

I expect (hope) the price to go down again once production has taken up and the product is back in stock on most websites, including Honeycomb’s.

Now, more important than price is of course: what do you get for your $$$?

Let’s look at the features.

While both are quite comparable compatibility-wise, we can notice some big differences in the features both yokes offer out of the box.

First, there is the number of buttons and switches. While the Logitech yoke offers plenty of standard buttons and switches, Honeycomb has certainly gone above and beyond the create a realistic cockpit experience, with a fully functional switches panel including master, alternator, avionics and light switches as well as a 5-position ignition switch. To get this with the Logitech Yoke, you would need to purchase the separate Logitech PRO Flight Switch Panel for about $99. 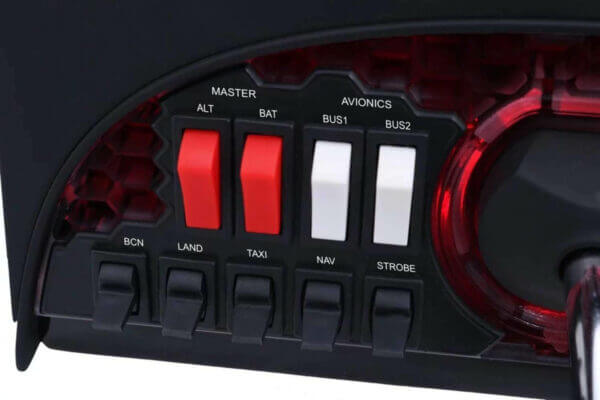 Now, although the Honeycomb yoke might offer some cool switches, there is one major thing it is lacking compared to Logitech’s option… a throttle quadrant. It’s not for nothing Logitech calls it the Pro Flight Yoke System: the set comes with a separate fully functional throttle quadrant, featuring 3 programmable levers, that are detachable in case you want to combine multiple throttle quadrants for a multi-engine sim cockpit, for example. The throttle quadrant uses USB to plug into the USB hub on the backside of the yoke.

Another difference that is notable is the way the yoke can be mounted. While the Logitech yoke features a single removable clamp mount made out of plastic, the Honeycomb Alpha offers two mounting options, with or without clamps. Two heavy-duty clamps made of steel can attach and secure the yoke. For thicker tabletops, a large 3M Micro-Suction Pad that produces 40lbs of tensile strength can be used for a clamp free solution.

Lastly, we will look at realism. Although everyone has their own thoughts about how things should feel and what makes it realistic, the Honeycomb does offer some very cool additional features, such as the switch panel and the additional buttons. What I noticed during my research is that most of the Amazon reviews mention how realistic the yoke feels in your hands, and that the force-feedback and general movement of the yoke in all directions resembled the real yoke feeling very well.

Also quite important to note is the rotation angle of the yoke: while the Honeycomb yoke can be turned a full 180 degrees (45° left and right), the Logitech Yoke will only give you about 45° left and 45° right, half of its competitor.. This feature appeared to be a deciding factory for many buyers.

I have personally used the Logitech (at the time still known as Saitek) Pro Flight Yoke System during my private pilot training, which proved to be very valuable and helped me save a good sum of money. I liked the feeling of it and how easy it was to set up and use, just plug and play. I also loved the built-in LCD screen with timer and the fact that it came with a separate throttle quadrant. It perfectly resembled the aircraft I was flying at the time.

Honeycomb only came to the market with their products more recently, so it wasn’t around yet during my initial flight training.

Looking at the above overview and some of the reviews I read on Amazon, I would personally go for the Logitech Yoke System if I was on a limited budget, as it offers plenty of features and the built-in throttle quadrant. No need to buy additional hardware (except rudder pedals perhaps). However, if my budget would allow for it, I would seriously consider the Honeycomb Alpha Flight Controls Yoke & Switch Panel, just because the realism, experience and overall quality seem to be better, and pretty much all reviews I have read loved it, with most clearly preferring it over the Logitech yoke.

Good luck, and have fun!

Buy now on Amazon
If you click this link and make a purchase, we earn a commission at no additional cost to you.
Last update: 1 day ago
-29%

Buy now on Amazon
If you click this link and make a purchase, we earn a commission at no additional cost to you.
Last update: 1 day ago

How to Build a Home Flight Simulator in 2021: A Step-by-Step Guide

In this comprehensive step-by-step guide, we show you exactly what it takes to build the perfect home flight simulator cockpit!

5 Gaming headsets that will greatly improve your flight simulator experience!

The Best Flight Simulator Software and Hardware in 2021

Here are some of the best tools to enhance your flight simulator experience as a student pilot!

The Best Flight Simulator Hardware That Resemble a Real Aircraft

While you won't want to use a home flight simulator as a way to learn to fly initially, the level of realism has astonishing benefits to the pilot in training.

﻿Do you have any questions, suggestions or remarks about this guide? Let us know!