The theoretical phase had been dealt with, meaning it was now time for our next challenge. Time for some simulator training! We would learn how to fly with the Boeing 737 as a real crew and this in both normal and abnormal situations. Emergencies from A to Z I’d say!

Both during our mock-up and actual simulator training we were split into groups of two. I worked together with a pilot who had been flying for the company since many years already. He started his career as First Officer on the BAe146, became Cruise Relief Captain on the Boeing 747 and now made the big step towards the left seat. There was no doubt that I would learn a lot from him!

For our next phase we went to Frankfurt in Germany. And why do we have to go to Germany for that? Well, the reason is that simulator availabilities are limited and besides that there is not a single Boeing 737 Classic simulator in Belgium at this time.

The simulator training consists of two parts: Fixed Base and Full Flight. The only difference between the two is that during Full Flight the simulator moves with the help of hydraulic structs, while during Fixed Base the simulator is static. We started off with the Fixed Base sessions. Five practice sessions and one test before moving on to the Full Flight phase. At this stage the main focus was to get very comfortable with all the normal procedures.

Once we had no more issues with those, we got the chance to fly a bit more and together with that we were confronted with our first emergency. In order to solve problems efficiently we always use the same structure.

We identify the problem, analyse the situation and based on our findings we create options before making any decision. Before executing our plan we obviously also inform all the involved parties such as the air traffic controller. Once the issue has been resolved we evaluate our actions to make sure we didn’t forget anything.

After five practice sessions it was time for a test. Our capability of following the normal procedures was evaluated during a simple flight from A to B. Luckily, this was without any issue! We could once again finish another phase on a good note. That night we didn’t only celebrate our succesful test, but also my 20th birthday! Happy birthday to me!

During the Full Flight phase there really was no such thing as “normal” procedures. Engine failures and/or fires, hydraulic problems, defect flight controls and many more challenging situations. During the Type Rating didn’t just learn how to handle the emergency itself, but also how to keep our heads cool while doing so.

Everyone makes mistakes and I am no different. However, the way you respond to them varies a lot. My first flight instructor at CAE, who is now my colleague, taught me to learn from mistakes and not to think about it too much anymore afterward. It surely was a good life lesson!

Both during the Fixed Base and Full Flight phase I also noticed how much I learned from the MCC course at CAE. The course was done on the Boeing 737NG, so it has a slightly different cockpit lay-out, but it’s still quite the same. Because of this, it took little time to get used to the cockpit and I was already able to work with a few systems.

I obviously also have Flight Simulator X to thank for all that.

After eight Full Flight sessions there were three other important steps: the LOFT, LVO and the Skill test! But before going to the test I’ll first explain those strange abbreviations.

LOFT stands for Line Oriented Flight Training and the name itself explains it quite well. We fly from A to B, comply with the normal procedures and practice a regular flight. Unfortunately, conditions will change and an emergency will pop up. Our job is to handle the situation accordingly and to land as quickly as possible. Luckily the session went well and because of the good co-operation between the Captain and myself we were able to safely land in due time.

Afterwards we had our LVO (Low Visibility Operations) training. During the LVO we fly purely on our instruments and make optimal use of the autopilot. Sometimes we are obliged to do so due to weather conditions such as low clouds and fog. At this point we execute a fully automated landing which I have to admit is quite a unique experience!

And there it was: our tenth simulator session. The Skill Test. We came prepared, knew our procedures very well, worked as a real crew in the cockpit and after four hours of sweating in The Box we finally got to hear those great words again:

“Congratulations, you have both passed the exam.”

After having spent almost 60 hours in the simulator we were now able to go home with a big smile! But there wasn’t a lot of time before the next step arrived…

Theory: check. Simulator: check. Next up is the Base Training where we will fly with the actual aircraft for the very first time. You can read all about it next week! 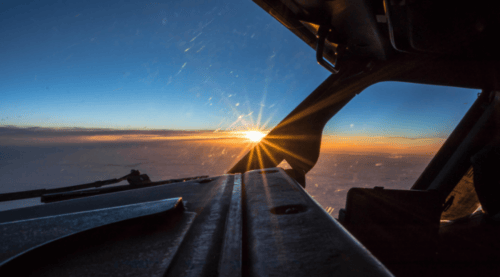 Road to the Right Seat 38 - A New Beginning