Since we love lists, here’s another one! This time, we’ll show you our top 10 of the most beautiful aircraft cockpits. If we forgot any awesome flight decks, feel free to add them in the comments!

With its integrated Garmin G1000 avionics suite, this aircraft cockpit is made for an easy transition from other aircraft using the system. It takes a lot of the workload from the pilots’ shoulders and even allows the airplane to be flown single-pilot. The flight deck consists of two 10.4 inch PFD screens (Primary Flight Display) that display essential flight information to the pilot(s). Between those two PFD’s, there’s an even bigger 15-inch MFD screen (Multi-Function Display) that displays a variety of other flight information like a moving map, engine information etc. Apart from the PFD’s and MFD, the panel is equipped with Garmin audio panels, the Garmin single remote flight management panel, FMS keypad and standby airspeed and attitude indicators.

The Icon A5 cockpit has more resemblance with the interior of a sports car than with that of an airplane, but it looks awesome. A simple, intuitive avionics system with analog gauges, a state-of-the-art GPS ad simple controls, make this cockpit extremely user-friendly and easy to use.

If you want to learn more about this awesome little airplane, I recommend you read our article about it, Boys and their toys: the Icon A5!

One of the most well-known single engine piston airplanes, the Cirrus SR22, has a modern looking glass cockpit with just two perfectly positioned Garmin Perspective displays and three standby instruments in front of the pilots. A sidestick on the left and audio and GPS control panels on the right give the pilot a comfortable flying experience with all necessary information, switches and handles within perfect reach.

The Airbus A380 flight deck, an impressive piece of modern cockpit technology. With 10 screens, displaying important flight information, engine parameters, terrain and even exterior camera feeds, the A380 pilots have all the information they need at their fingertips while flying the biggest commercial airliner in the world.

A spacious and modular cabin that seats 6 to 8 people, including 1 pilot who flies the helicopter from the left seat. In front of him, the pilot has a beautifully designed avionics panel with a combination of analogue gauges and glass screens.

Like we are used from the Embraer Executive jets series, the avionics in the Phenom 100E cockpit are really in a class of their own. Providing the pilots – or pilot, since the airplane can also be flown single-pilot – with a glass cockpit with large displays, enhanced situational awareness and state-of-the-art avionics to reduce the workload. Due to the lack of an overhead panel, the number of switches and buttons in the cockpit is reduced to a minimum. Together with a smart system automation that reduces pilot’s checklists, this helps the pilot when flying the jet single-pilot.

Cockpits of modern gliders have evolved to become simple, modern, elegant and practical, displaying all important information to the pilot trying to get the best out of himself and the glider he’s flying.

Seen by many as the ultimate single engine aircraft, this workhorse provides its pilots and passengers with power, performance, luxury and most of all, fun. Being able to land take-off from almost every runway, even in the most remote areas on the planet, the PC-12 is the dream airplane of many pilots. Real Swiss craftsmanship.

With only a few of them still airworthy, this historical airplane’s cockpit is too awesome not to be added to this top 10. Old but gold as they say. 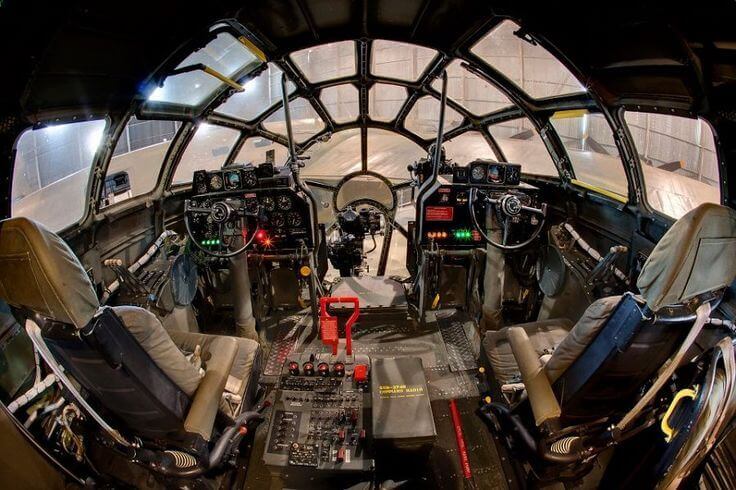 According to their website, “EASy is Dassault’s philosophy implemented on the hardware platform of Honeywell’s Primus Epic system. Dassault and Honeywell worked closely together on the project. As the primary system architect, we concentrated on achieving a new type of man-machine interface, one that is both highly intuitive and interactive. This is a vital key to improving situational awareness.”