Road to the Right Seat 20 – Halfway

October 3rd, 2016 – Last week I passed my third progress test and I’ve also done all my night flights. The CPL exam is approaching faster than expected!

No navigation this time, but manoeuvers! During PT3 we are tested on our landing techniques, stalls, steep turns and emergencies. The theoretical part was quite limited this time which was a nice change.

It was quite calm when I took off so I decided to start the test by doing a normal landing, a flapless and a glide approach. It’s PT1 all over again, but this time we needed to be a lot more accurate.

Once that was done we flew to the practice area. I had to wear a hood in order for me to only see the instruments. Some turns, climbs and descends, that’s it. During our Instrument Rating we will always fly with a hood, but in Arizona it’s all about visual references.

After having done all the stalls, general handling and emergencies we flew back to Falcon Field. The examiner seemed very pleased with my flight so once again I passed my test. Off to the next part of training! 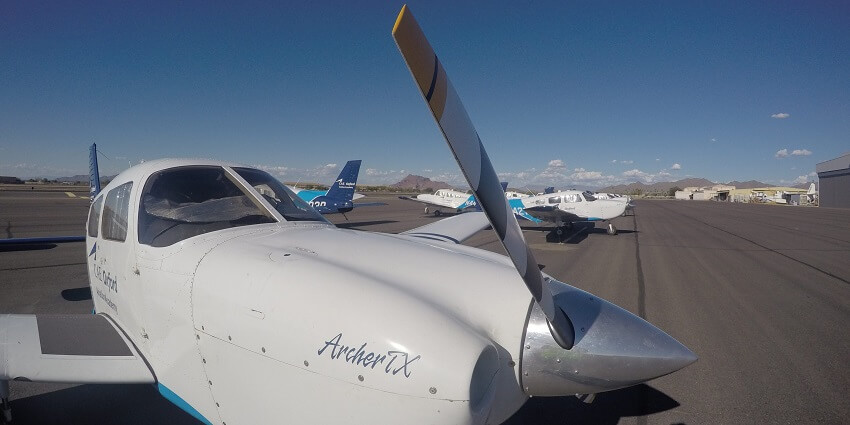 Sunset usually means the end of the day, but sometimes it was just the beginning. For my first night flight I brought along Kevin, a colleague from group C.

Flying at night is great fun, that’s for sure. Not only the temperatures are a lot milder, but also the views are phenomenal. We took advantage of the situation and flew overhead Phoenix Sky Harbor once again, the airport I talked about last time.

After having flown for almost two hours we landed in Goodyear. We had something to eat and quickly went back to the airplane for my second flight of the night.

We’re halfway so it’s time to show you some numbers! That way you’ll get another view on my training here in Arizona.

The students of promotion 36 who started their training in September 2015 are almost done with their flights here in Arizona. After passing the CPL they will finally go back to Belgium.

The Instrument Rating will be taking place in Oxford and not Antwerp, but we haven’t gotten much information yet. An update will follow soon enough!

I’d like to wish the best of luck to all students of promotion 36 with their CPL!