April 1st, 2017 – In March I made a lot of progress and I passed the sixth Progress Test yesterday. All lessons are now finished, which means it’s time for the Instrument Rating Test, the official flight exam. The end of Oxford flight training is in sight!

During my stay in Phoenix, I regularly told you about the so-called Progress Tests. Here in Oxford, we also need to take one Progress Test. It’s just an internal Instrument Rating Test to see if you’re ready for the official exam.

The preparations for the flight are almost identical to those we made in Arizona. We look at the weather, calculate the weight and performance of the plane, fill in a flight plan, study our navigation, check the plane … Business as usual! 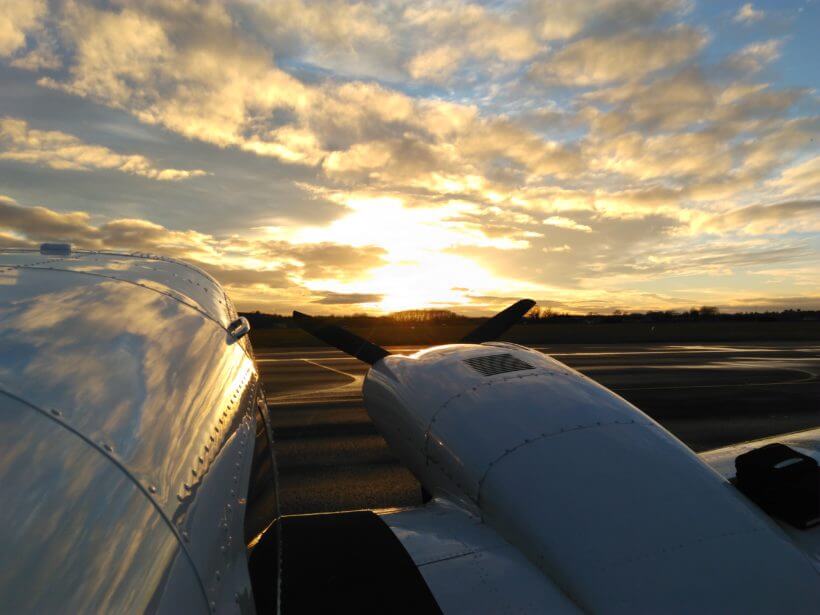 Before we went to the plane, I had to give the examiner an extensive briefing. After explaining my preparations, I received some theoretical questions. We discussed all aspects of the flight, what the examiner expected from me and how we would handle it. This way, we could avoid ambiguities and we go to the plane without worries.

The flight is not so special in itself. For my test, I flew to Bournemouth, an airport in the south of the UK. There I did an ILS approach followed by a simulated engine failure. On the way to Oxford followed some general handling exercises.

In Oxford, I ended the flight with an NDB approach followed by a visual circuit and a landing with just one engine. All that was left was just to taxi back to the parking, go over the shutdown checklist and then the moment of truth!

Once again good news and I can not help but be happy! Now on to the official exam.

With only 9 completed missions, we could hardly call February a successful and productive month. Fortunately, we saw a lot of nice flying days in March, resulting in almost double the number of missions. With 8 flights and 8 sim sessions, I will finish in March. A big step forward!

This morning I flew with my instructor for the last time. The very last real lesson in my training to become a pilot. All that remains is the exam.

After the Instrument Rating is complete, the MCC/JOC will follow as the last part of the program. Currently, it seems that we will start sometime in June, but we haven’t received any concrete information yet. What we do already know is that the course takes four weeks and will take place at night.

The simulators in Brussels are busy, which means that we will not always fly on the most practical hours. For example, a sim session can take place from 23:20 to 05:20. Long nights ahead! More information on the planning and progress of the MCC/JOC will follow soon.