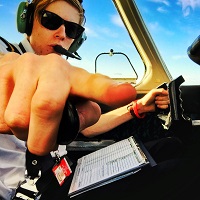 Whilst it’s not an enjoyeable aspect of training, everyone can get airsick.

On these longer navigation flights (between 2.5-4 hours duration) I would be susceptible to airsickness. It seemed the more it happened, I tend to get more nervous about flying and more frequently I would become airsick. It almost became a mental thing whereby my nerves would get the better of me and send me into a brief state of uncomfort and other physical side effects which I will go into detail later. It came to a point in my training where the flight school was not comfortable sending me solo until I they had faith that I wouldn’t get sick in the air (which is more than fair enough). So things definitely had to change as it was certainly beginning to effect my training to a point where it could no longer be ignored.

What is airsickness? In my experience, this is what I noted:

I rang my aviation doctor (DAME) and he was very helpful and reassuring stating that it can just happen in training especially for pilots with less that 150 hours in piston aircraft. He said I will be fine in the long run but there may be a few uncomfortable flights as I continue my training. However, he gave me two options which may provide a quick fix to my mid-air issues:

The travacalm acupressure wristbands did work, however, it felt really restrictive and uncomfortable having a bit of plastic pressing into both of your wrists whilst trying to physically fly an aircraft.

So, where to now?

The more experienced I became, I understood I needed to make myself as comfortable as possible before getting into the aircraft.

The last point is the most important. The 30 minutes before allows you to relax, have something to eat and drink, sit down and calm your nerves, talk to some of your friends around the flight school. Give your brain a rest because it’s going to be working for the next 3+ hours!

Once in the plane, there isn’t really much time to sit around and relax, especially for short legs of a navigation exercise. So you really do need to look after yourself whilst in the small workspace of a single engine piston aeroplane cockpit! It’s going to get hot, it’s going to be very loud and there are going to be lots of vibrations. These conditions are very uncomfortable to work in, let alone compete against for the training pilot, so look after yourself in the air.

Remember, getting airsick is completely normal, humans weren’t designed to be flying at high speeds in high altitudes above ground level combatting the forces of flight and also the effects of engines and meteorology. It’s a sign of your body showing it isn’t used to this environment, and you will get used to it and become airsick less frequently as you log more hours.

My biggest tip would be always have a sick bag accessible within reaching distance!

It’s not talked about very often with pilots, I don’t know why, whether people are embarrassed or feel they can’t talk to others about it, however it’s important that individuals affected by this talk up about it so they can fix their issues and make flying more enjoyable. I’ve spoken up about my airsickness issues because it was a very lonely road when going through it all in training, the attitude was essentially “deal with it and get on with flying”, but you can’t get on with training if you cannot deal with it. If this post can help 1 person going through a similar path of uncomfort and uncertainty then I’ll be absolutely thrilled.

Has anyone else had any experiences with airsickness, if so, what worked for you in battling this?