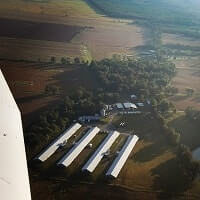 The other I was digging through some stuff and came across my Young Eagles certificate from my first airplane ride. I was 9 years old at the time and I had almost forgot about that day but this reminded me about it and brought back all those memories. It also reminded me how hard the airplane bug bit that little 9 year old and how I had decided that I was going to have an airplane when I grew up. I’ve always loved airplanes since but that kinda took the back burner for almost 10 years until a series of events that led me to start my PPL training in a rented aircraft and eventually buy a half share in N32181. Seeing that certificate brought back the memories and and also brought the realization that that one even was what had ignited the chain of events leading to me being a half owner of a Piper Warrior. As I was sitting there thinking this over, I thought it would just be the coolest damn this ever if I would locate the pilot that took me up for my first ride and take him for a ride in my airplane. A little bit of detective work uncovered information indicating that  this pilot had given almost three hundred rides through the Young Eagles program. I also uncovered an obituary indicating that he had been a retired airforce veteran and had served in the Korean War but had passed away in June 2013 at the age of 82. I was disappointed to find that out but it got me wondering what inspires other people to get into aviation? So let’s hear some stories about how you guys got into aviation. This could get very interesting.