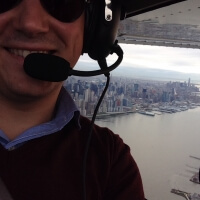 The aviation world has never been on such a long stand still as it is today during the COVID19 crisis. Unfortunately, general aviation wasn’t an exception. Governments around the world published different rulings around general aviation flights including restrictions and even complete bans on specific flight types. In Belgium for instance, all VFR and training flights were prohibited until May 11th 2020.

While I did my complex endorsement in a Piper Arrow IV in the beginning of January 2020, I hadn’t flown anything faster than a Cessna 150 until then.

I was already planning on getting my high performance endorsement and found it and excellent opportunity to get right to it as soon as the flight restrictions lifted. The airplane we’re talking about is a 1979 Piper Lance II (T-Tail Saratoga) and has a Lycoming IO540 rated at 300HP. Apart from the extra horse power and a third row of seats, the airplane is similarly equipped to a T-tail Arrow.

After a thorough walk around, the airplane looked fit for flight. So was I, as well as my instructor. The airplane had flown in April for a maintenance flight for the last time and was supposedly in good condition.

What was supposed to be a training flight for touch and goes in Sint-Truiden/EBST, quickly turned out to be an emergency situation back in Antwerp/EBAW.

The weather was excellent with light winds, high ceilings and great visibility. Following the recent uplift of the VFR and training flight restrictions, the airspace was busy with a lot of flight training traffic.

8 minutes later, we were back on the ground. What happened in between was flying the aircraft first, navigating towards our VFR reporting points, deciding on our plan of action whilst running the emergency landing gear failure checklist and keeping Antwerp Tower up to date of our plans.

See how we handled the situation in my video here: