Loss of Thrust on Takeoff – A Tragic Story With Many Lessons

DISCLOSURE: This story was originally shared by Dan Gryder on his Facebook account, I give full credit to the original author. You can find his post here.

August 12, 2016 It is so hard to believe that it has been 16 years ago since Brock’s accident. This is one that lives with me every day, on every flight.

Brock was a fine young man that truly had the aviation bug. I had soloed him, gotten him his private, then instrument, and then commercial ratings. He was a family friend and spent a lot of time at our house, playing with the boys who were 1 and 4 at the time. He was always digging deeper into airplanes, and how to be a better pilot. He had goals and dreams like any other kid. He often talked about being able to fly someday for a mission organization, or a relief effort. There was never any mention of flying so that he could get a high paying job. That wasn’t Brock.

Brock had gone on with his flying and had quite a lot of flight time, somewhere around 400 hours when this accident happened. Surely more than enough to be able to give a simple airplane ride to two friends, day VFR, perfect weather, and a long paved runway in a Cessna 172. That morning at about 930 am my phone rang. It was in the days before cell phones so the house phone rang and I knew immidiately something was wrong. I hadn’t talked to Brock for a day or two, so I didn’t even know that he was going out to give some rides, but I quickly learned that the 172 was down, just off the departure end of runway 31 at Falcoln Field. In the days and weeks after the accident, the most asked question asked of me, and I of myself, was HOW this could have happened.

Brock was a great kid, a good pilot, and very careful about his airplane operations. How. In the months following the accident, I put a tremendous effort into determining that this same airplane had been returned to the rental school a total of 8 times in the previous month. Each time the same complaint. The airplane lost power in flight. Its just that on all of the other flights, the airplane was in cruise or descending when the anomoly ocurred. Brock’s happened at about 400 feet, on takeoff. The mechanical WHY of this accident had to do with the butterly valve in the carb that had an AD on it, that had not been addressed, whereby the valve flipped to the full position and in essence made the engine run so rich that it could not produce power. That, along with witness accounts explained that he had a loss of thrust on takeoff, but the mystery of what happened next that day would take years to unravel.

But I did unravel it. As it turns out, we are all human beings, built with the same fears, reactions, emotions, and instincts. It took several hundred simulations in my own airplanes to conclusively PROVE that the average pilot, given the same scenario (on takeoff, at climb speed, and being generally unsuspecting) would actually pull hard on the yoke during the first three seconds following an engine failure. WHAT? Why? Because that is the way you are wired. My routine was to turn off the fuel valve at 300 feet, after having explained that this is a normal flight, then wait the required 20 seconds for the engine to starve and quit, and watch (and video) the reaction. Amazing. Everyone freezes in shock, but ultimately PULLS on the yoke. I continued this wherever possible, always leaving myself an out in the form of a farmers field below just in case my own self induced engine failure ever did not result in making the engine run again. In a majority of cases, direct intervention was always required of me to keep us from stall/spin at this low altitude. The amount of time from LOTOT to SPIN is between 5 and 9 seconds, depending on the airplane, and how hard the pilot pulls.

It was just a few years later that very experienced local pilot Leo Giles made a takeoff from this same airport, same runway, same VMC conditions, and had the same result. Leo suffered a LOTOT at 400 AGL and “pulled aft” on the stick. His crash site was just a few hundred yards from Brock’s. Leo died alone in that plane that day, his aircraft did not suffer a mechanical failure of any kind, other than his loss of thrust. Eventually I began to pay closer attention to other similar GA day VMC single engine fatal accidents. What do the ALL have in common? They were all being piloted by a human, that was not “EXPECTING” a LOTOT at this low altitude. It was the “lack of expectation” that was the key. These pilots, and their unsuspecting passengers are in essence being killed by an overall lack of awareness, and lack of planning for this very likely scenario. In the years that followed my aviation friends that had the capability to help with this did just that, and pushed for a change in the initial pilot training requirements that at least attempted to address this scenario that today is still the HIGHEST CATEGORY FATAL ACCIDENT CAUSE for single engine planes! Julie Filucci, Doug Stewart, and many more were involved in steering the new ACS, which replaces the pilots PTS, and became effective in July of this year.

Here is the exact wording out of the new ACS that is now mandatory for each new pilot:
PA.IV.A.R14 14. Plans for engine failure after takeoff.

PLANS FOR ENGINE FAILURE AFTER TAKEOFF! You see, it’s not that the scenario isn’t easy to overcome, it’s the fact that your average pilot is totally “not ready”, and has not planned for this, should they encounter LOTOT during this phase. We could easily wipe this entire scenario out and literally save hundreds of lives and airplanes annually with more awareness, and a new mindset: Here is what I teach: “ON TAKEOFF, I AM GOING TO LOSE THE ENGINE. WHEN I DO, I WILL SAY THERE IT IS, PUSH.” If a pilot will rehearse this prior to each takeoff, and be totally “expecting” it like we do, there is no reason to ever see a stall/spin takeoff accident again. I have drawn a map so that you can see Brock’s path that day, 16 years ago this morning. The first box is the point of LOTOT, the path goes up from there. The second box is where the wing quit flying. Neither Brock nor I had this picture or this information 16 years ago. I taught him to fly, but this topic was never covered, because at the time – no one had any idea that these are the instincts of pilots in this scenario. But now we know, and now YOU know. All of my efforts and this post are dedicated to the life and memory of my friend, Brock Senft. 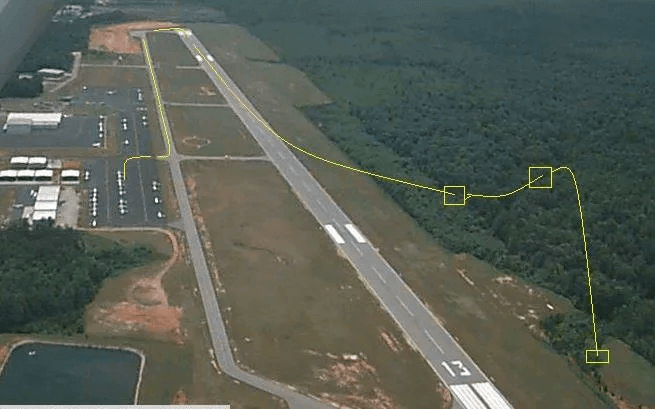 The 10 Smallest Airplanes Ever Made