Road to the Right Seat 43 – Recurrent

As a pilot it’s essential (and simply a requirement) to keep your skills and knowledge current. Only half a year after I started flying I went to Paris for my very first Recurrent Skill Test! Time for some more virtual flying sessions in the box.

Theoretical recurrent
Besides the simulator check we have to do every six months we are also obliged to do a yearly theoretical recurrent training. Through a series of online lessons we review various theoretical subjects, mixed up with a few tests in between to make sure we do actually understand the concept.

We revise the general characteristics of the airplane, look into the hydraulic and electric systems, the engines, how the flight computer works and a few other important systems. I usually try to read more about technical things like this when I’m flying all around Europe, but these online lessons are surely not a bad way to get you into studying.

A good technical knowledge always comes in handy, especially when somethings goes wrong in the cockpit. You’l be able to analyse the situation in a better way and could possibly even solve the issue.

Back to the box
On April 13th it was time to go. I boarded the train in Antwerp together with my Captain with Charles-de-Gaulle in Paris being our final destination.

Even though my Type Rating took place in Frankfurt, there is another Beoing 737 Classic simulator located in both Amsterdam and Paris. At this moment another simulator is being installed in Brussels, but for now we still stick to the foreign ones. You could see it as a nice weekend in Paris, except you don’t get to see the Eiffel Tower and you’ll be sweating in the simulator. Oh well, I guess a bit of a change doesn’t hurt!

The recurrent is split up into two parts. During day one we’ll have four hours of training and the day after we’ll be performing the actualy skill test. Either way we will be thorougly tested during both sessions with plenty of difficult situations and failures.

We already arrive on Friday evening which gives us the time to prepare the flights properly and to get sufficient rest for the coming two days ahead. 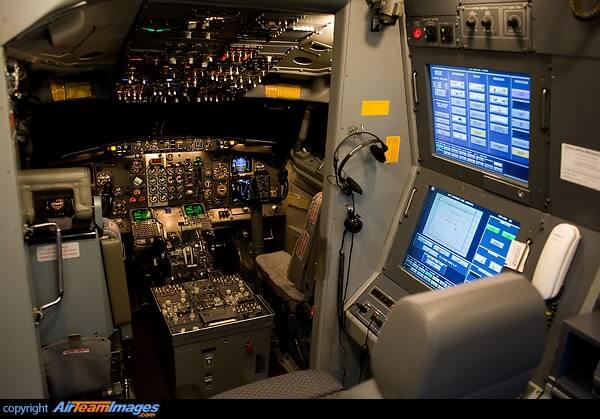 Day 1: training
After a good rest and a nice breakfast we are ready to go. The instructor, Captain and I are brought to the simulator building for the training session.

When we arrive we receive a long briefing about the instructor’s expectations from the first session. On top of that we also go over a few technical details concerning the procedures and possible emergencies we might encounter. Once that was done it was time to hop into the simulator!

We take our places and the instructor sits behind us as some kind of all-seeing god who is able to do whatever he likes. He can simulate any airport, weather condition and failure with one push of a button. And trust me, that’s quite impressive when you know all this happens in a big box on hydraulic struts.

Going from the mountains of Hawaï to the airport of Liège, everything is possible. Furthermore there’s also the possibility to simulate plenty of interesting weather conditions and believe me, they like to use that option! Heavy rain, thick fog, rough turbulence.. It does feel quite realistic.

During the training session we encountered a few special situations. For example, both our engines failed while we were at cruising altitude. We were lucky to have Paris within our reach and due to our quick descent we were able to restart both engines in time before making a safe landing. My conclusion: the Boeing 737 isn’t a very good glider.

Besides this first situation we also had hydraulic and electrical problems, but the good co-operation between the Captain and I helped us to solve each problem professionaly and within a timely manner.

Day 2: the skill test
And off we go: the real test. We shortly discus our preparations with the examiner, answer a few theoretical questions and a few moments later we were back in the box already.

Just a regular flight from Porto to Lisbon… Or at least during the first five minutes. Moments after take-off we lose communication with the tower and while we’re trying to fix the problem we are on a collision course with another aircraft. There surely wasn’t a lot of time to think.

Aviate – Navigate – Communicate, that’s the sequence we use to handle the situation. The communication issue is put aside, the Captain flies the airplane and I try to spot the other traffic. Luckily we were able to spot him fast and we passed the aircraft with plenty of margin. Not long after we re-established communication and reported the encounter we had.

Suddenly, smoke started to form in the cockpit. Smoke means fire and a fire onboad an airplane is without a doubt one of the most dangerous situations you could have. We put on our oxygen masks and protect our eyes with goggles to prevent irritation due to the smoke.

Statistically speaking you have 15 minutes to land and evacuate in order to survive an onboard fire. Losing time is our biggest enemy so it’s important to know the procedures perfectly if we want to make it back to the ground safely. 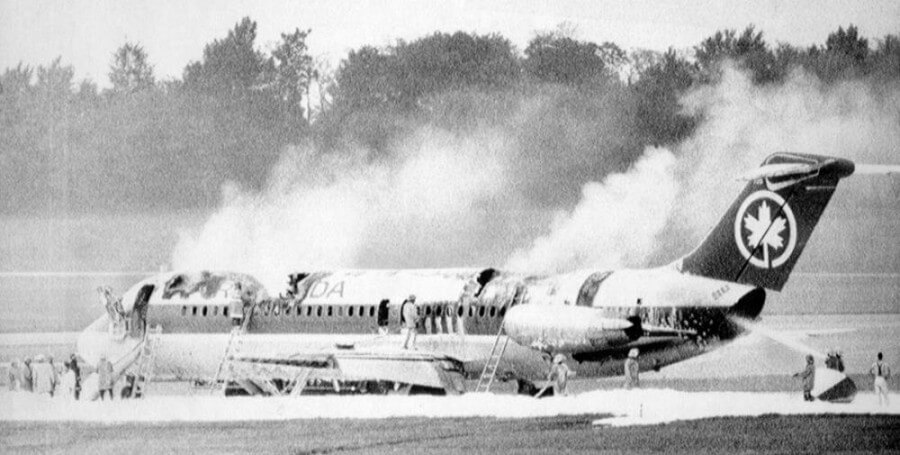 On June 2nd, 1983, a toilet fire onboard an Air Canada DC-9 resulted in 23 casualties. The accident caused the implementation of smoke detectors and automatic firefighting equipment in all airplane toilets.

Lisbon is right in front of our nose, is reachable within 15 minutes and the weather is fine. There was absolutely no doubt about our decision in this case. While the Captain was flying the airplane in the emergency descent I take care of the necessary checklist and try to find the source of the smoke/fire.

It seemed that the smoke originated from an overheat in the duct which supplies the cockpit of fresh air. After I shut it off, the smoke started to fade away slowly but surely. It did help us to spot the runway, but we weren’t safely on the ground just yet.

When we landed in Lisbon the smoke was completely gone and we stopped the airplane right next to the runway as pre-caution. It took us 10 seconds short of 15 minutes. Close call, but we made it!

After a short break it was time for part two of our skill test. Now the main focus was on engine failures, but also approaches which we don’t do that often such as the CAT III approach where the airplane almost lands automatically. 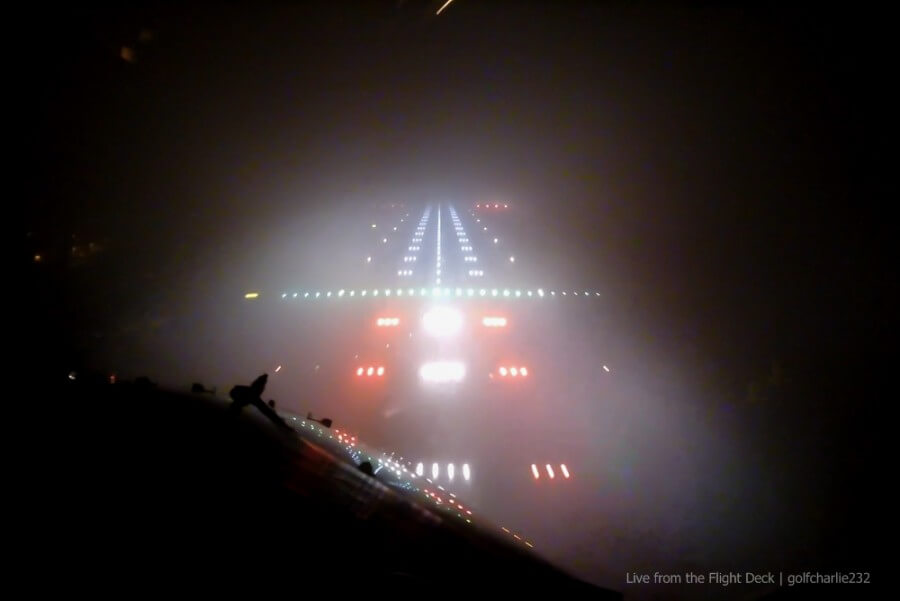 When the visibility goes below a certain minimum we are obliged to perform an automatic landing. We practice this approach with and without failurs in order to be prepared for every situation.

During tae-off the examiner simulates an engine fire (or something similar) right after V1, the so-called decision speed. It is the last moment at which the first action to stop the airplane must be taken. Once we pass this speed it is mandatory to take off.

We repeat the scenario multiple times as it is quite complex and it is important to know very well what you are doing. An airplane is perfectly capable of flying on one engine (or even with none), but you must be able to perform the correct procedures with enough accuracy and this is why we repeat the exercise until our legs are numb.

The session went well, we were given some advice for the future and after the debriefing both the Captain and I were given compliments for our performance. Now we were allowed to fly around with the real deal for another six months!

Endless studying
When you want to become a pilot, you need to understand that the studying never ends. Before the flight training, during the training, afterwards, during your job as an airline pilot… To keep it simple: you’ll be doing it for the rest of your career. As you’ve just read we go into the simulator every six months and we are obliged to review technical subjects every year to the learning never stops. Do I mind? Absolutely not.

Let me therefore conclude this post with a quote by Wilbur Wright, one of the people who perfectly describes what I’m trying to tell you in a few, wise words.

“It is possible to fly without motors,
but not without knowledge and skill.”
~Wilbur Wright

The simulator check went well and the theoretical knowledge is fresh in my mind again! Next time I’ll tell you all about the current stage of my career and what the future might bring. See you!