Get Your FREE eBook
All Posts AirplanesMilitary

Air superiority was a central part of Nazi Germany’s military strategy. German fighter planes dominated European airspace and provided cover for armored corps and ground troops during the critical months in early 1940 when German forces overran most of Europe. German fighter planes created immense publicity showcasing the military might of the Third Reich. And the propaganda they helped generate impressed the regime allies while intimidating their enemies. 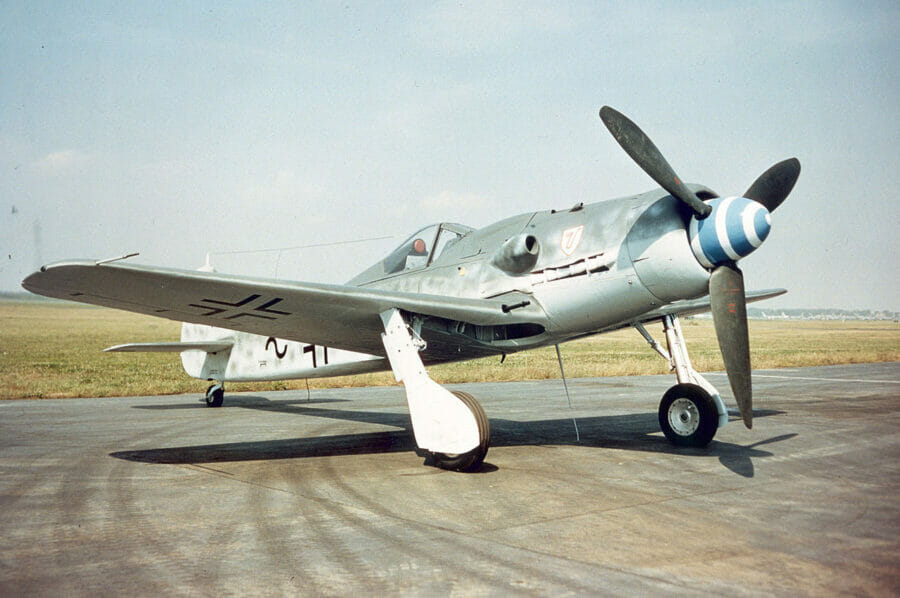 The abundance of fast, powerful, reliable, and lethal WW2 German planes is a testament to the brilliance and ingenuity of German aeronautic engineers of the era. They pushed the limits of existing technology to develop groundbreaking aircraft fuselage and engine designs unlike the world has ever seen. The outcome was WW2 german planes with superior performance and handling characteristics unmatched by any existing Allied fighter plane until much later in the war.

Nazi Germany’s defeat meant very little has been written about the fantastic Geman fighter planes of WW2 compared to the American fighters of the era. History, they say, is written by the victors. This article hopes to correct that injustice by revealing the 10 best German fighters of WW2. 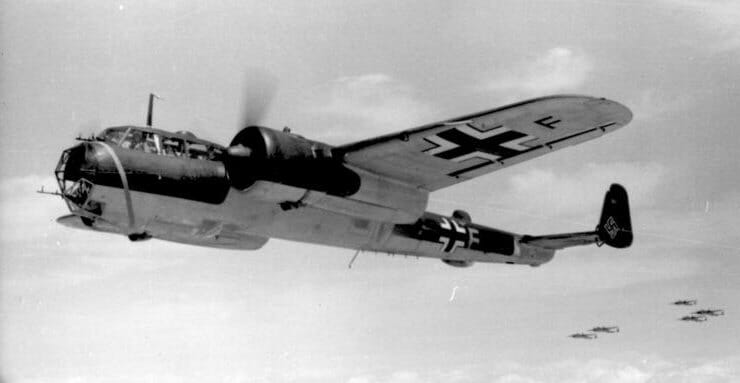 The Dornier Do-17 may seem an unusual choice for this article, but it qualifies due to a combination of several performance capabilities. The aircraft is a twin-engine multirole night-fighter in service with the Luftwaffe during the early years of World War 2 until it was outclassed by more modern Allied fighters and retired. It is commonly referred to as the ‘Flying Pencil’ due to its sleek fuselage design.

Originally designed as a fast bomber, the Do-17 is one of the several early WW2 German airplanes operating as a night fighter. It was capable of incredible speeds and proved faster than most Allied aircraft in production during the early part of the war, making it almost impossible to shoot down.

The twin-tail Do-17 made its combat debut during the Spanish Civil War, and it saw action in the Central Mediterranean, The Eastern Theater, and the Battle of Britain. The Do-17 served various post combat operations within the Luftwaffe as a trainer, glider tug, and research aircraft. Operators include The Bulgarian Air Force, which operated Yugoslav-built Dornier Do-17 Ka’s alongside German-built models, the Finnish Air Force, Royal Yugoslav Air Force, Royal Hungarian Air Force, and The Spanish Air Force. 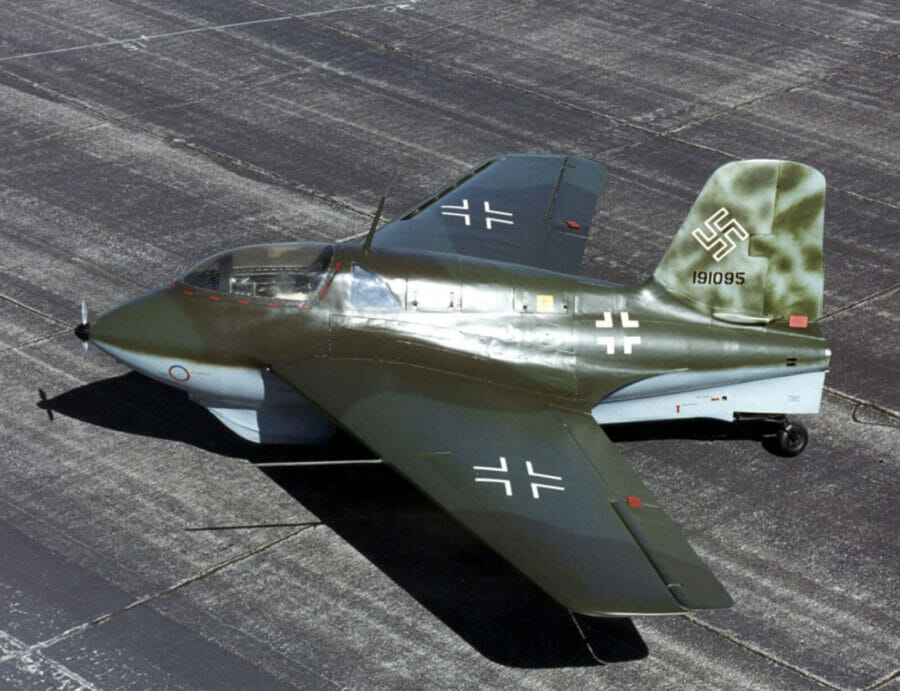 DAYTON, Ohio — Messerschmitt Me 163B at the National Museum of the United States Air Force. (U.S. Air Force photo)

The Messerschmitt Me-163 Komet is a rocket-propelled German interceptor aircraft. Even though it has a less than stellar combat record, it is one of the best WW2 German planes due to its groundbreaking design. It has several world records, more than any German planes of WW2. They include the only rocket-powered fighter to enter military service, the only rocket-powered military aircraft to fly combat missions, and the first human-crewed aircraft in history to exceed 1,000 kph in level flight.

The speed records set by the Me-163 would remain unbroken for almost a decade. However, the aircraft suffered from a major flaw. Its rocket fuel was highly corrosive and volatile, resulting in the death or injury of several test and military pilots. Also, the aircraft failed to impress in its dedicated role as an interceptor suffering ten losses while managing to shoot down an almost equal number of aircraft. 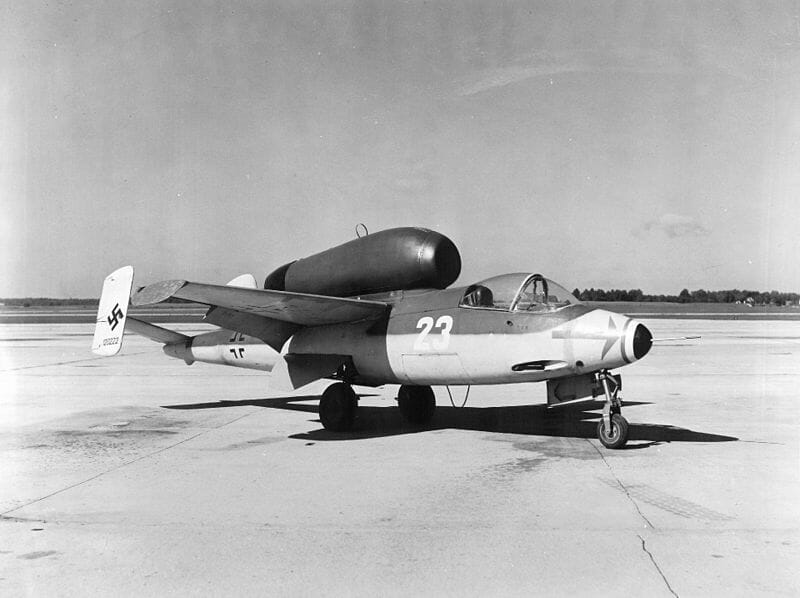 By 1943, Allied bombing attacks had devastated Luftwaffe’s fighter squadrons. In response, the German military hierarchy launched the Emergency Fighter Program to develop an advanced single-engine jet fighter. The program’s primary mission is to create an aircraft capable of outperforming Allied aircraft and reversing the unsustainable combat losses of German fighter planes. The result was the Heinkel He-162 Volksjager (Peoples Fighter), a sporty-looking plane powered by a single BMW 003 axial-flow turbojet engine located on the fuselage just behind the cockpit.

The He-162 featured revolutionary designs that look modern even today. Heinkel engineers installed the engine directly over the wing’s center section, and a pair of slanted vertical tail fins replaced a conventional single tail fin to clear the jet exhaust. Other cutting-edge designs included a high-mounted, slightly swept wind design and the ejection seats.

He-162 production was kept simple to save costs and maximize the turnover rate. However, the aircraft was developed and deployed too late to affect the War outcome significantly. Unrelenting Allied bombing damaged the He-162 production infrastructure, and producers moved its assembly underground to prevent further losses. Germany was able to produce only a handful of He-162s while fewer aircraft saw action before Germany’s defeat. 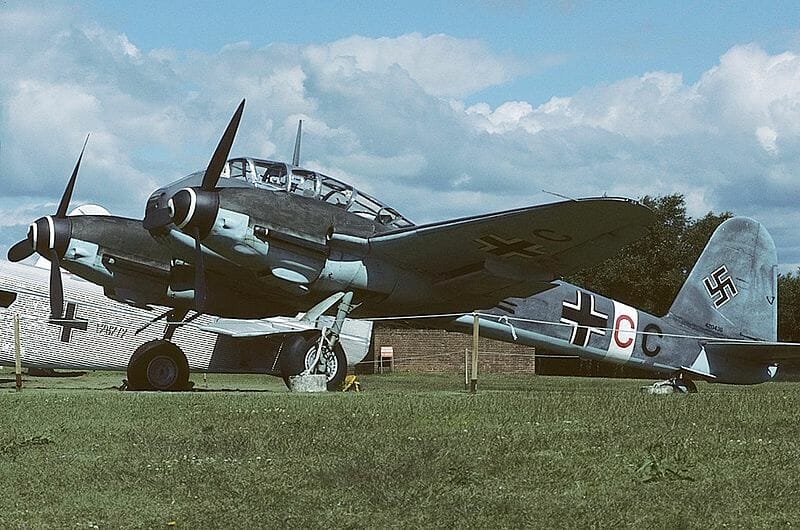 Initially conceived as a Schnellbomber (fast bomber), the Messerschmitt Me-410 is a heavy fighter and one of the best WW2 German planes. It began development as the Me-210, but problems with handling led to numerous design changes, which were significant enough for the aircraft to have a new designation.

The Me-410 featured a longer fuselage than the previous Me-210. Other changes included new automatic leading-edge slats on the wings and the introduction of more powerful twin Daimler-Benz DB 603A engines giving the Me-410 more payload capacity and the ability to carry more bombs.

The twin-engine multirole Junkers Ju-88 wears many hats quite well. It is a Schnellbomber (fast bomber), one of the many WW2 German airplanes designed to be faster than rival Allied fighters, thus making interception difficult. The Ju-88s were also formidable night-fighters and dive bombers, making them one of the most versatile WW2 German planes.

Although problems beset the Junkers Ju-88 development phase, it eventually became a Luftwaffe workhorse flying thousands of sorties throughout the war. The aircraft production ran from 136 to 1945, making one of the most produced German airplanes. The Ju-88 has more variants developed than other twin-engine WW2 German airplanes.

The Focke-Wulf Fw-190 is one of the best German fighter planes from WW2. Introduced in 1941 as a single-engine multirole fighter, it was the backbone of the Luftwaffe alongside the Messerschmitt Bf-109 and flew numerous missions all through World War II.

The Fw-190 proved superior to Allied aircraft after its first combat deployment in Eastern Europe. But poor engine performance at high altitudes meant it was limited to low altitude missions. Several Focke-Wulf Fw-190 variants were developed during its long production run, including the Focke-Wulf Ta-152, a high altitude high-speed interceptor.

The superior handling characteristics of the Fw-190 made it one of the most popular German fighters among pilots during WW2. And like the Bf-109, several German pilot aces made numerous kills in the aircraft. The Fw-190 production exceeded twenty thousand units. It was the second most-produced German fighter until American bomber raids on Fw-190 manufacturing facilities in Germany and Poland ended its production run. 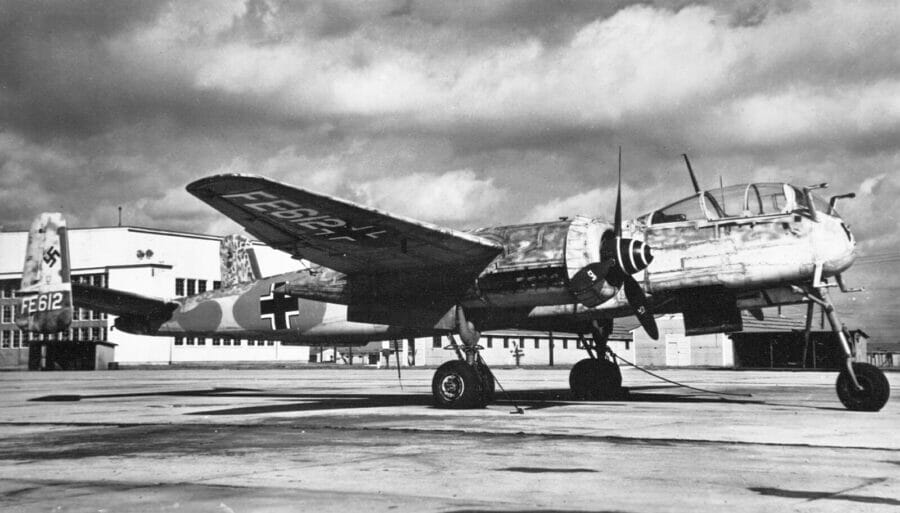 On paper, the Heinkel He-219 ‘Uhu’ is one of the best German fighter planes and should have been a roaring success. However, the story of this German twin-engine night-fighter is an excellent example of how political rivalries and over-engineering cost Germany World War II.

The development and production of the He-219 ‘Uhu’ were hampered by the vicious infighting between Ernst Heinkel, the aircraft manufacturer, Josef Kammhuber, commander of the German night fighter forces, and Erhard Milch, who was in charge of aircraft construction in the German Aviation Ministry RLM (Reichsluftfahrtministerium ). The over-engineered aircraft was also complicated and expensive to build, adding to the overall production problems.

Despite its impressive combat debut late in World War II, the He-219 ‘Uhu’ was unavailable when it mattered most. The numerous production issues meant the He-219 was not available in sufficient numbers to effectively counter Royal Air Force bombers when the Allies began the strategic night bombing offensive, which devasted German defenses and industrial facilities. And by the time Germany increased production, it was too late for the aircraft to have any significant impact on the war’s outcome. 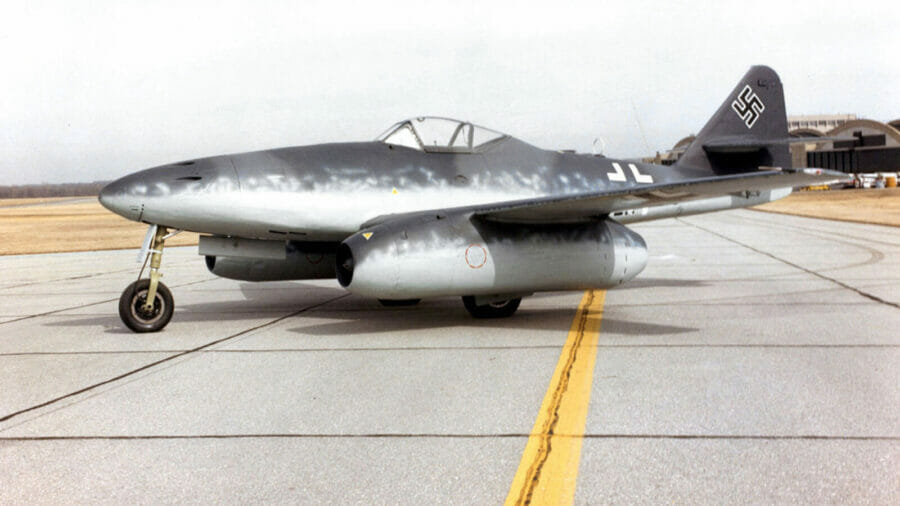 ‘As if an angel were pushing on wings,’ was how Adolf Galland described flying a Messerschmitt Me-262 twin-engine jet fighter prototype in May 1943. However, the aircraft was produced too late and in too few numbers to influence the outcome of World War II.

The Schwalbe (English: Swallow) development was a closely guarded secret, and it incorporated the most advanced aviation technology of the era in its design and construction. One of the best German fighter planes of WW2 and the most significant aircraft design of all time. The Me-262 was faster and carried more ammunition than Allied jet fighters. Production of the Me-262 ushered in the era of the jet age, and half a decade later, jet fighters became commonplace, relegating piston engine fighters obsolete. 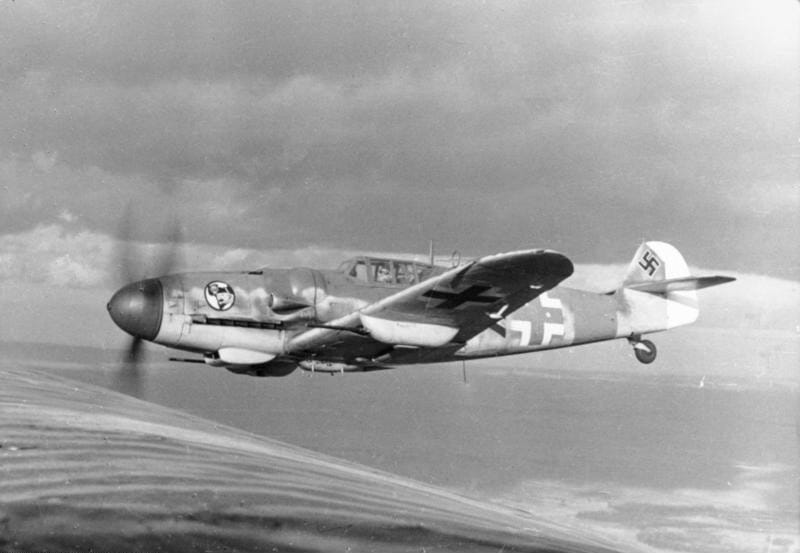 The Bf-109 was the workhorse of the Luftwaffe, and it remained in service with the air forces of other countries – notably Israel – well into the era of fighter jets. However, the basic design is from the early 1930s. And it is one of the two WW2 German planes that flew combat missions throughout World War II.

The Messerschmitt Bf-109 featured an all-metal monocoque construction (one of the most advanced of the period) to save weight and reduce the number of separate components on the aircraft. Unlike post-war fighters, the Bf-109 also has a closed canopy to protect the pilot from the elements and a retractable undercarriage for better aerodynamics.

Variants of Bf 109 were developed to keep the aircraft competitive with more modern Allied fighters.  It was capable of performing several mission tasks, including bomber escort, all-weather fighter, ground-attack aircraft, fighter bomber, and reconnaissance aircraft. More than thirty-three thousand units were produced, making the Bf-109 the most produced fighter plane of all time. However, a dark side of its incredible production numbers involved production in Nazi concentration camps through slave labor. 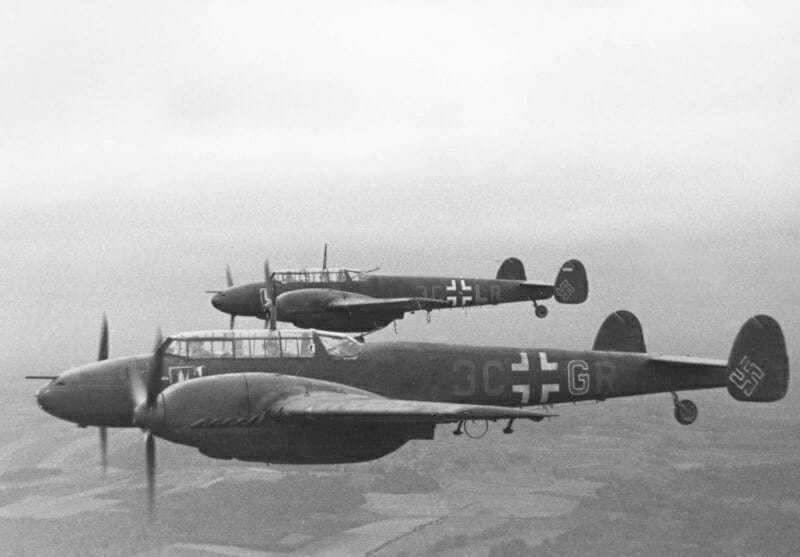 Destroyer (Zerstörer), night-fighter (Nachtjäger), fighter-bomber (Jagdbomber or Jabo), the twin-engine Messerschmitt Bf 110 is the most successful World War II German fighter bomber and one of the best German fighter planes of the era. The Bf 110 was a personal project of Hermann Göring, and the aircraft would remain in Luftwaffe service until the end of the war.

Although the Bf 110 excelled in routine combat missions. It was most fearsome as a night fighter, a role which pilots consider the aircraft well suited. Fitted with airborne radar capable of targeting enemy aircraft within 200m away, the Bf 110 wreaked havoc among RAF bombers on nighttime bombing missions between 1940 and 1941.