There is no doubt that the aviation industry is full of extreme aircraft and the people who love them. Some people will drive several miles to an airport to view an Airbus A380 scheduled landing and take off. And on the other end of the spectrum, there are the type of folks who wouldn’t bat an eyelid dropping a hundred thousand dollar payment for the small airplanes that are no bigger than a coffee table. 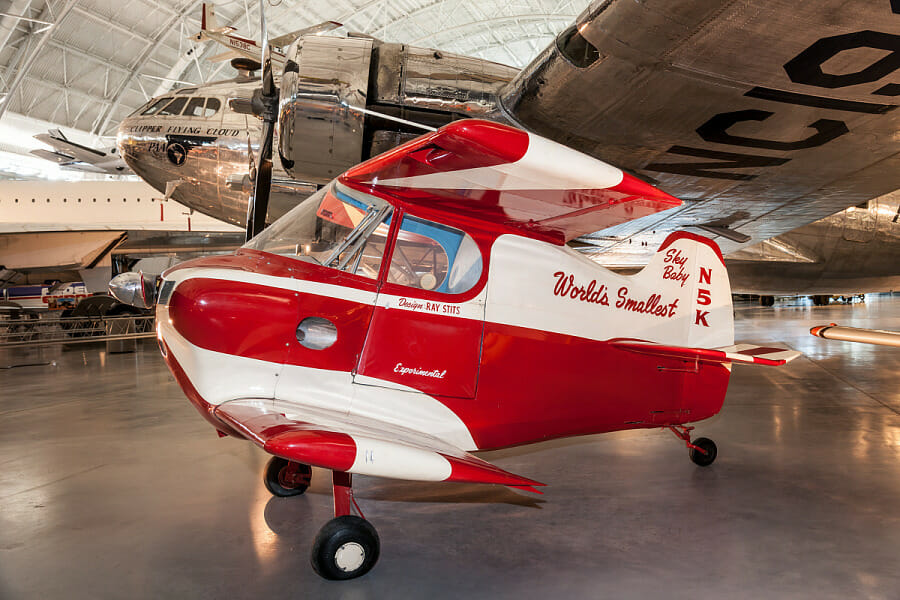 We all have our personal bucket list of happiness. And if your idea of fun is whizzing through the air in the smallest airplanes ever made, then you are in your happy place. We have compiled an extensive list of the smallest planes in the world ranging from one-off record-chasing airplanes built in a garage to production aircraft with thousands of units in sales. 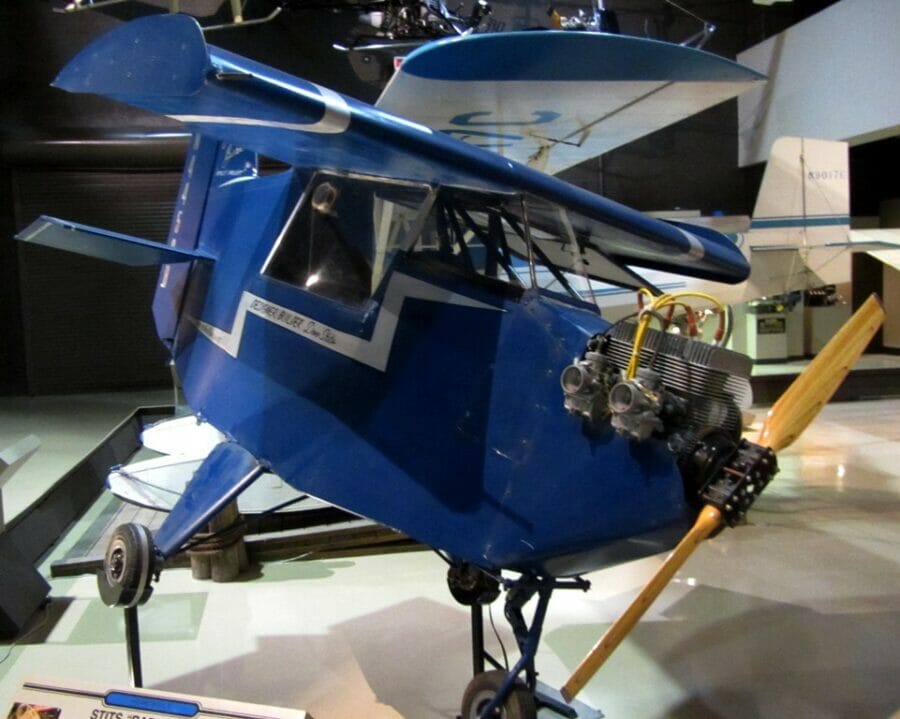 Don Stits spent a lifetime helping his dad build small airplanes, and in 1984 he decided to create the smallest airplane in the world. It took five years of working weekends in his garage with help from his wife and two young kids and cost him $5,000. But it paid off because, in 1984, the Guinness Book of World Records acknowledged Stits DS-1 Baby Bird as the “world’s smallest monoplane” and the “smallest airplane by take-off weight.”

Using a steel tubing airframe and a wooden wing spanning only 6.3 inches, Stits chubby small aircraft looks nothing like a conventional airplane. However, it proved skeptics wrong by completing thirty-four flights between August and 1989. Stits Baby Bird is currently on display at the EAA AirVenture Museum in  Wisconsin. 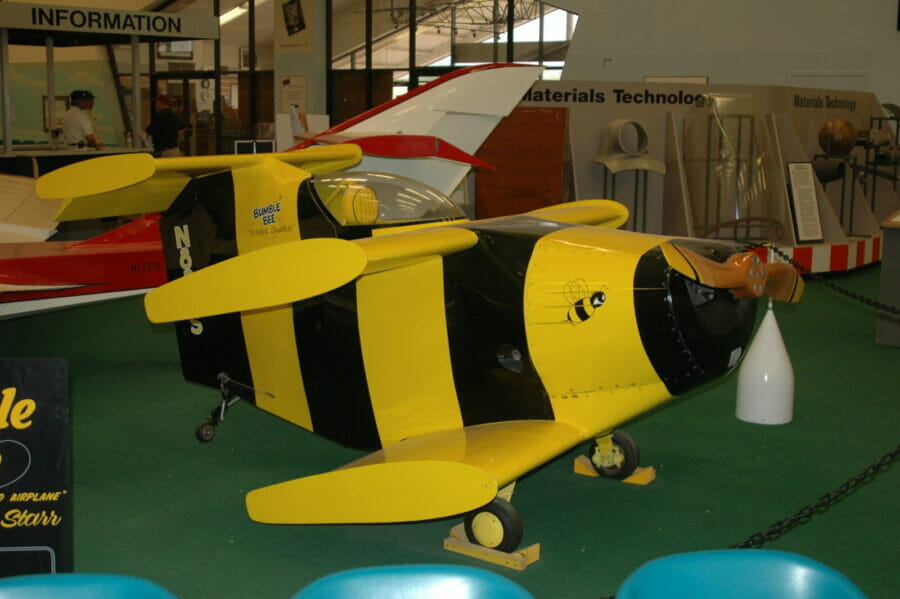 Starr had helped design and fly small airplanes before deciding to build one. Although retaining the bi-plane design as the earlier Bumble Bee I., Starr’s Bumble Bee II was lighter with smaller dimensions. Several critics derided the Bumble Bee’s negative staggered cantilevered wings as too short to generate enough lift, so Starr decided to name his airplane after the famous stubby winged bee species.

Rober Starr proved his detractors wrong when in April 1988, the Bumble Bee II took flight in the presence of record adjudicators from the Guinness Book of World Records. However, the Bumble Bee II was destroyed in a crash the following year. 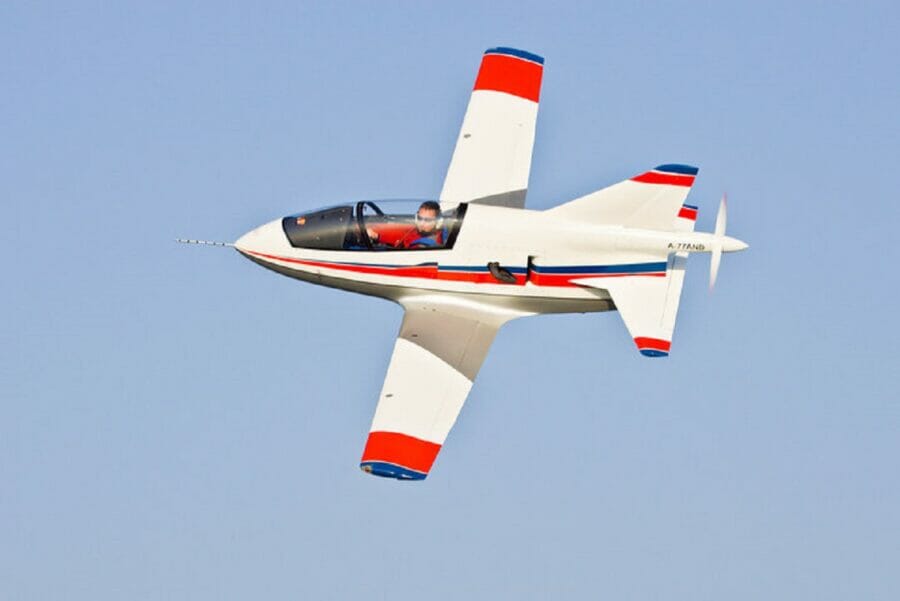 Bede BD-5 range of single-seat aircraft is among the smallest airplanes ever made. Designed by Jim Bede, an aviation enthusiast, and entrepreneur. The BD-5 has a streamlined all-metal fuselage resembling a fighter plane with a proposed 70-hp Hirth piston engine installed in the rear.

The BD-5 captured the public’s imagination making it one of the fastest-selling and most popular jets. Within weeks 4,200 individuals had paid the $200 deposit required to reserve a 40 hp production BD-5 kit plane costing $2,965. Bede Aviation developed several variants of the BD-5 airplane, including the world’s lightest jet and smallest jet airplane, the BD-5J.

Stits Sky Baby is a biplane with negative-stagger and cantilevered wings with a traditional tail assembly. He hired Rober Starr as a pilot, and together they flew the Sky Baby at airshows all over America. It had a recorded top speed of over 185 miles per hour and a landing speed of 80 miles per hour.

Today, the Sky Baby is displayed at the Udvar-Hazy Center in Virginia. 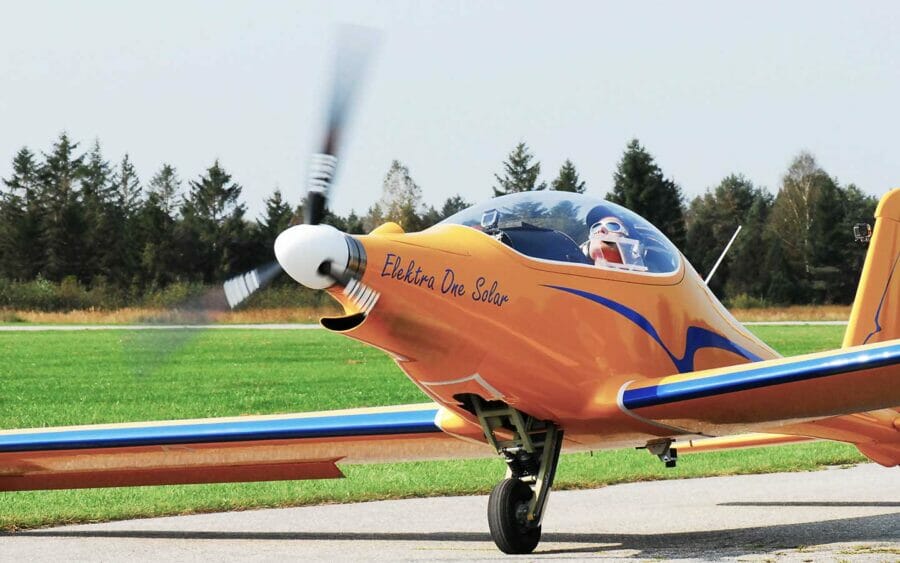 A practical zero-emission crewed aircraft is finally here in the guise of the PC-Aero Electra One single-seat electric plane. Tipping the scales at a mere 100 kg (220 lb) empty weight, it is one of the smallest airplanes ever made and potentially the smallest airplane powered by electricity.

The PC-Aero Electra One generates power from 280 solar panels installed on its wings. Additional power comes from the lightweight electric motor and l11.5 kWh lithium-ion batteries inside the fuselage. Manufacturers claim the Electra One consumes 2.5 kilowatts of power during horizontal flight with a maximum endurance of three hours and a range of 500 km (310 mi). 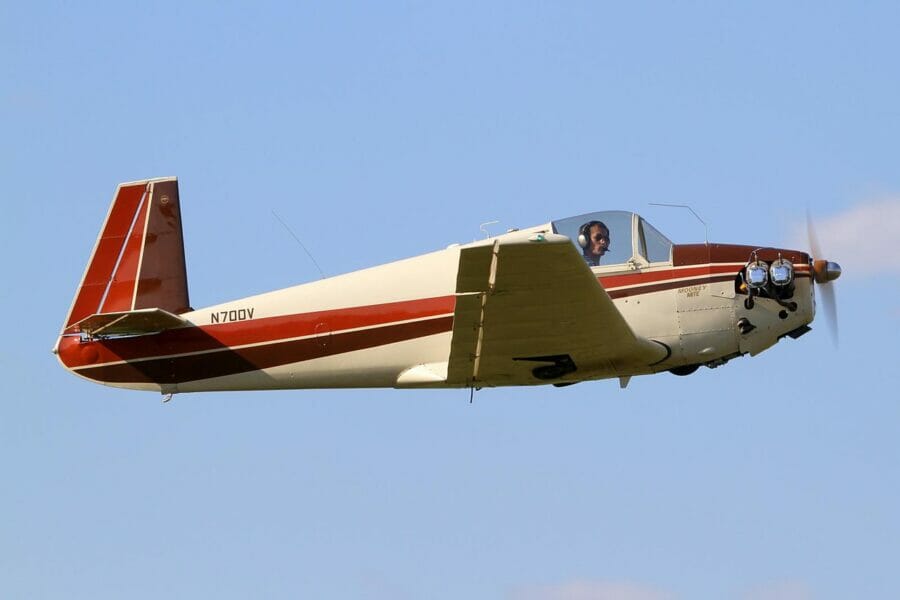 In 1947, airplane designer Al Mooney hit on the idea of developing a small light airplane for former World War II fighter pilots. The result was the Mooney M-18 Mite, a low-wing single-engine monoplane fitted with a retractable tricycle undercarriage. It was the first personal airplane, and weighing a mere 236 kg (520 lb), it is one of the smallest airplanes ever made.

Al Mooney designed the Mite with a focus on low operating costs, and he built the plane using a combination of lightweight steel tubing, plywood, and fabric to reduce weight. The Mooney Mite had a  “safe trim” system to minimize pitch changes whenever the pilot deployed wing flaps. It also featured a NACA 6 series airfoil – the first time on a civilian aircraft. The Mooney Mite wasn’t universally popular, and the company built only 283 Mites before it ceased production. 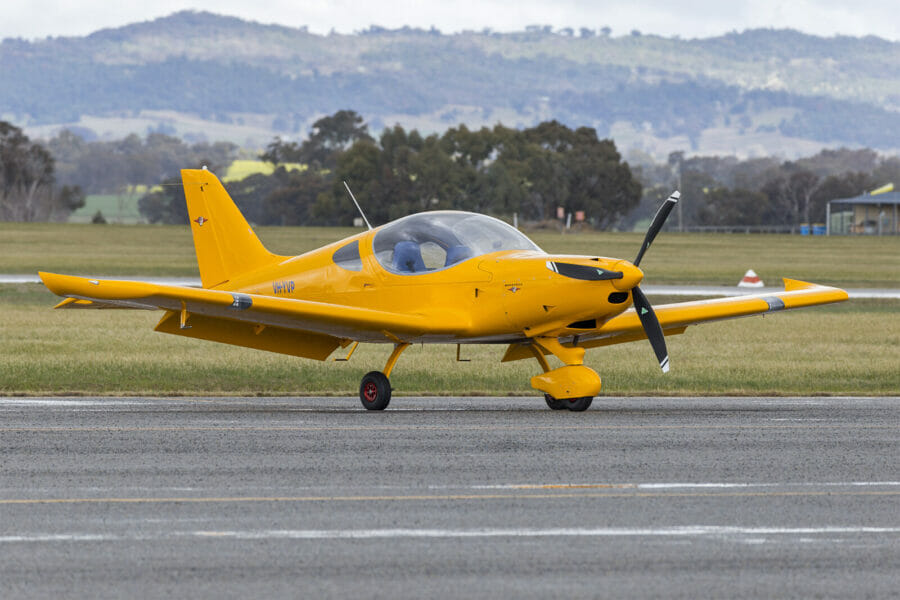 The designers of the Bristell Classic discarded a conventional closed cockpit layout in favor of a bubble canopy arrangement to save space. It has an all-aluminum fuselage, wings, and empennage, with some models equipped with a retractable tricycle landing gear. Customers in US and EU markets have an extensive range of engine options. 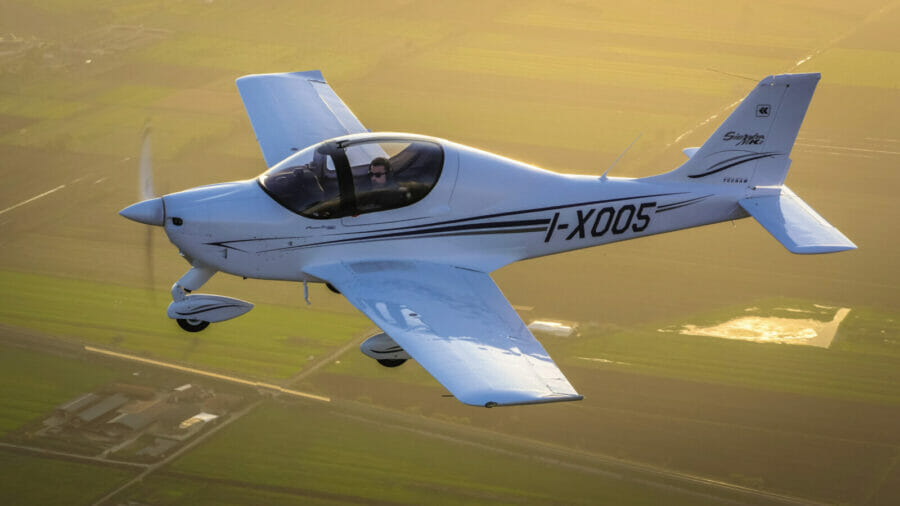 The Italian-made Tecnam P2002 Sierra is on our list of smallest airplanes ever made, not just due to its diminutive size but for its functionality. It handles like a much larger plane while sporting a fantastic variety of safety equipment and luxury options. The two-seater low-wing is an excellent aircraft for experienced and newbie pilots, hence its popularity as a flight trainer.

Made primarily from aluminum, the P2002 Sierra can withstand high Gs of +4 to -2. It sports a clear bubble canopy for extra visibility, and its wings house a pair of integrated tanks capable of holding 22 gallons (100 liters) of fuel. Additional equipment includes electrically controlled flaps, an engine-driven auxiliary power unit, and a BRS (Ballistic Recovery System) parachute. 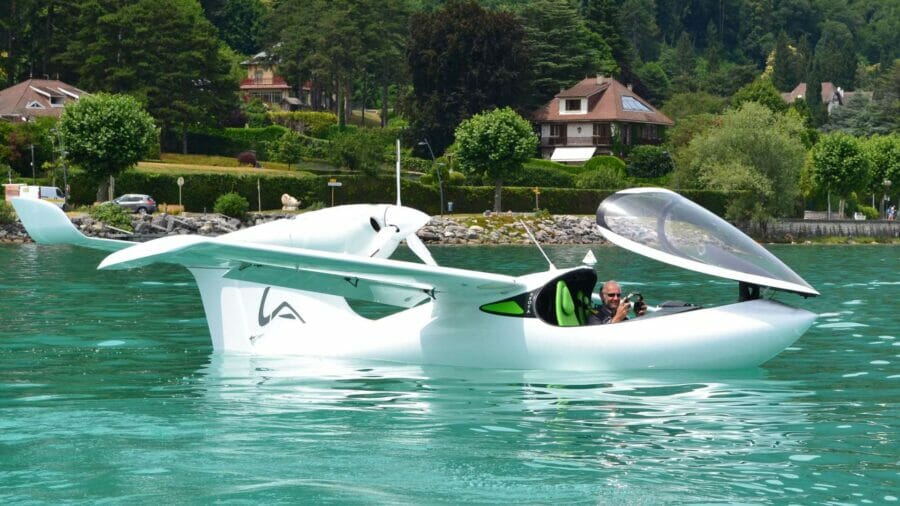 LISA airplane’s Akoya is a twin-seater light amphibious aircraft designed to operate from land, water, and snowy terrain. It is made from carbon fiber and polymer composites to achieve a lightweight airframe. The Akoya is one of the smallest airplanes of the amphibious variety, and it has a pair of Seafoils™ and hydrofoils, enabling the aircraft to achieve seamless water landing and takeoffs.

The Akoya is powered by a single rear-mounted piston engine with retractable taildragger landing gear, and folding wings to provide ample garage storage room, and allow easy transportation on a trailer. Its airy bubble canopy cockpit features high-tech flight controls, including navigation and communication equipment. You also get lots of room to store fishing gear and baggage for a two-person weekend getaway.

It is not often that we are blessed with an aircraft that sets a design and functionality benchmark in its class like the ICON 5 did. Kirk Haskins, product developer and ICON Aircraft CEO, realized his airplane’s allure as a millionaire’s personal flying toy goes beyond its primary purpose as a mode of transport.  The ICON 5 is a two-seat, high-wing amphibious airplane, and one of the smallest airplanes in its class.

Boys and Their Toys: The Icon A5

Featured in all major aviation and non-aviation magazines, the Icon A5 has attracted the attention of everyone in aviation.

This fantastic plane has a carbon fiber airframe and it is powered by a single engine installed behind the cockpit. The airplane is fitted with a retractable undercarriage for surface landings, and twin sponsons providing hydrodynamic stability serve as stepping boards for occupants. Owners of the ICON 5 are treated to an ergonomic cockpit designed by BMW engineers with an impressive list of safety features. These include an easy-to-read angle of attack indicator providing stall awareness for rookie pilots, a whole airframe BRC parachute, and a stall recovery feature allowing the ICON 5 to maintain altitude when the engine stops.