The need for speed has always been a defining human character. Humans have been racing horses and chariots since the dawn of time. And right after the Wright brothers invented the airplane, barnstormers of the era took the passion for speed to the skies. 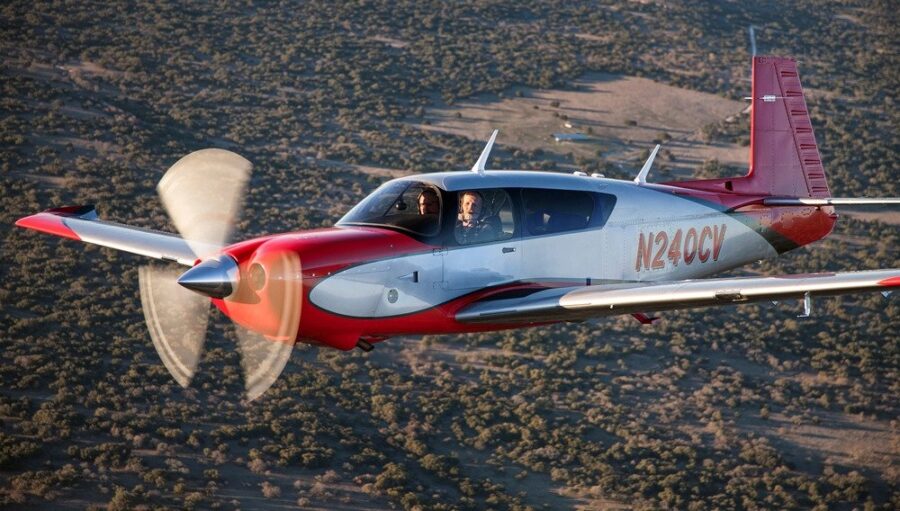 Single-engine turboprop military trainers and fighter airplanes like the Pilatus PC-21, Beechcraft T-6 Texan II, and the Embraer EMB 314 Super Tucano are among the fastest single-engine planes today. But the problem is that few mortals have access to those airplanes, and even fewer people are cleared to fly those machines. We will exclude them from our list.

We are talking about the fastest general aviation single-engine piston and turboprop aircraft civilians are permitted to own – and fly. Our list excludes all purpose-built single-engine aerobatic airplanes because they are unavailable to the average aviation Joe. And, yes, we acknowledge the official piston-engine speed record of 528.315 mph (850.241 km/h) set by “Rare Bear,” a highly modified Grumman F8F Bearcat airplane.

Why don’t you fasten your seatbelts and settle down for a whirlwind ride as we explore our impressive list of the ten fastest single-engine airplanes in today’s era. 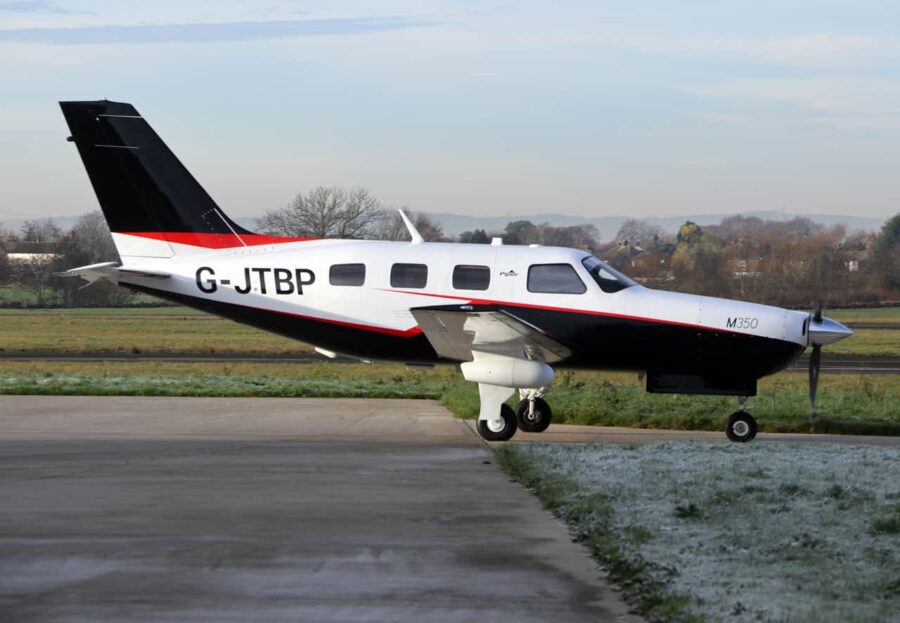 Our first entry, the Piper M350, is odd because it is the only business class single-engine piston airplane on the list. It is built to carry five passengers in a spacious pressurized cabin featuring hand-stitched leather seats with foldable backrests, ambient reading lights, USB ports, and individual cup holders. It is safe to say the Piper M350 is not your average single-engine piston plane.

All that luxury requires a formidable power plant, and the M350 does not disappoint. Its turbocharged Lycoming TIO-540-AE2A engine packs enough muscle to propel the airplane at speeds of 213 knots without shedding a drop of performance at 25,000 feet. Equipped with a state-of-art Garmin GFC-700 Autopilot, including Garmin Electronic Stability Protection(ESP), envelope-protection, and anti-hypoxia safety systems that help stabilize the airplane, including performing emergency landings in case of pilot incapacitation. The Piper M350 is a gift that keeps on giving.

Let’s let you in on a secret, the “T” in the SR22T badge means “turbocharged,” announcing the Cirrus SR22T hot-rodding pedigree. Cirrus airplanes are renowned for their industry-leading safety features. But with the introduction of the SR22T model in 2010, the company has raised the benchmark for combining performance and safety in an exhilarating single-piston engine package.

Cirrus engineers installed a 315 hp turbocharged Continental TSIO-550-K 6 cylinder piston engine in the SR22T to release additional airspeed and better high altitude performance. Although the SR22T’s higher performance means it has a lower payload and range than other SR22 variants, it more than compensates with its crisper handling and acceleration. 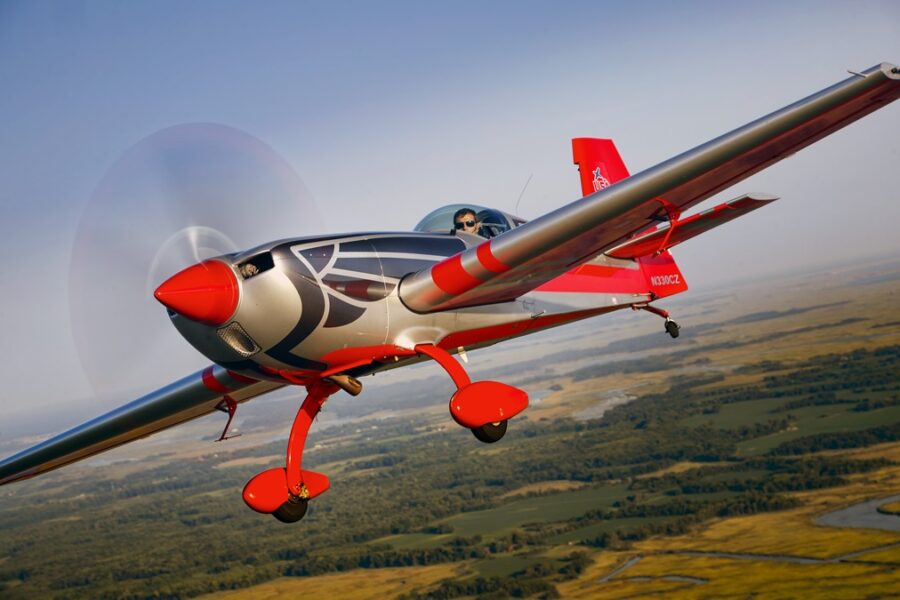 EXTRAordinary is hardly the appropriate word for this low-wing single-piston engine aerobatic airplane. Yes, folks, the Extra 330SC is a championship-winning stunt plane highly desired by championship-winning pilots. And one of the two aerobatic planes to make our list of the ten fastest single-engine airplanes.

Although earlier Extra 230 and 260 airplanes were reigning championship birds during most of the 80s and 90s. The desire to create a highly maneuverable new generation aerobatic airplane with improved pilot control resulted in extensive modifications of the wing structure and ailerons using composite materials to achieve vital weight reduction while improving rigidity and strength.

The best part about the Extra 330SC is the responsive Lycoming Thunderbolt engine. Producing over 300 brute horsepower gives the aircraft the additional thrust required to reach the proper speeds for maneuvers during competitions. However, exploring the limits of the Extra 330SC can be dangerous due to the airplane’s ability to achieve high Gs, and pilots have reported experiencing over 20 Gs during high-speed stunts.

Airplanes are an amazing invention, and they are the fastest means of mass transportation. But exactly how fast do airplanes fly? Let's find out! 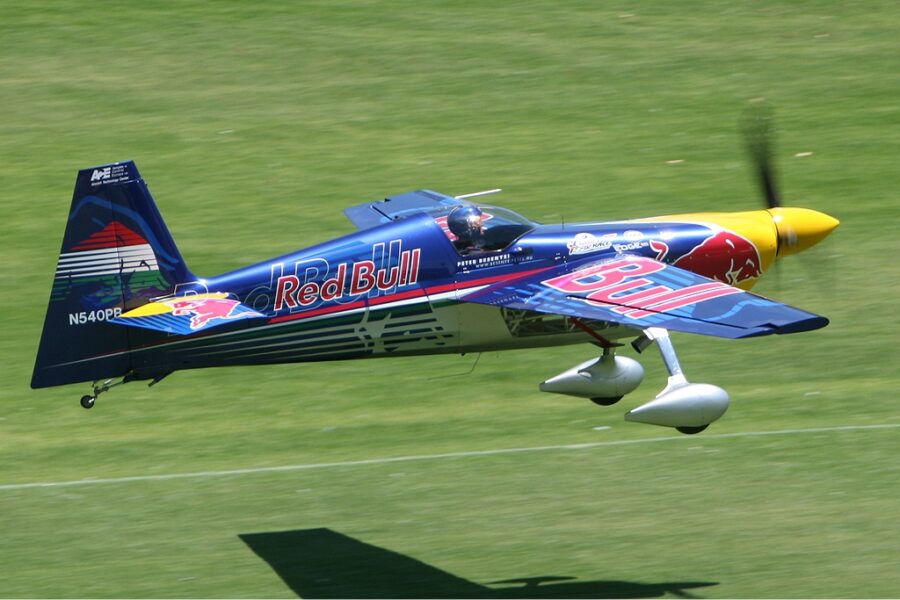 Production of the Zivko Edge 540 is a serious affair involving high-end CAD technology and liberal use of composite materials throughout the fuselage and the tail boom. The outcome is a lightweight airplane of exceptional strength, a global favorite of stunt pilots, and a common feature in airshows and championships worldwide.

“There’s no fixing’ what ain’t broke” is a maxim that has worked well for Mooney’s airplanes. And there is sure to be an epitaph with those words up on a wall somewhere within the company’s offices. The M20V Acclaim is the company’s most recent incarnation of the long-running Mooney M20 series, a tube, and sheet airframe design first introduced in 1959.

Considered by aviation experts worldwide as a worthy rebirth of the venerable M20 family. Mooney’s M20V Acclaim Ultra is a faster, sleeker, and more practical airplane than its forebears due to an engine capable of delivering promised speeds, the addition of a pilot side door, and swanky leather-clad interior, and a high-tech Garmin G1000 NXi avionic system.

The powerful 280 hp Continental TSIO-550-G is the secret sauce behind the Mooney M20V’s exceptional airspeed. It boasts two Garrett turbochargers, each feeding a bank of cylinders with compressed air at a maximum pressure of 33 inches, allowing the engine to unleash its full power at altitudes of up to 20,000 feet. 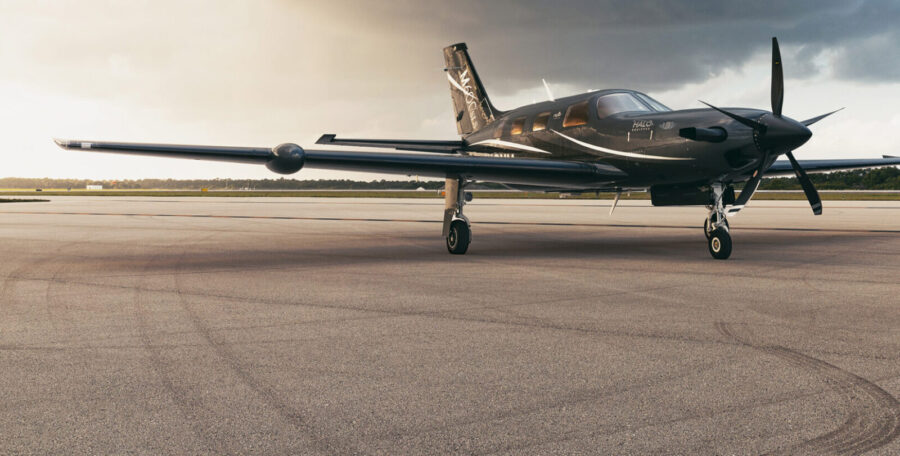 Many aviation buffs regard Piper Aircraft’s M Class range of airplanes as dependable general aviation workhorses. However, their high airspeed is why we have two models from the range on our list of the fastest single-engine planes. The 2016 edition of the Piper M600, an upgrade of the reliable Piper M500, adds more flexibility, power, and efficiency to an already perfect single-engine airplane range.

Owners of the Piper M600 get redesigned wings, new avionics (Garmin G3000), and more range due to increased fuel capacity. The ultra-reliable Pratt &Whitney Canada debuted in the M500 and returned with more power in the M600, producing a hundred more horsepower to deliver 275 knots top speed. The Piper M600 also gets cool toys like Garmin’s emergency autoland system dubbed “HALO” by Piper. This system allows the airplane to land if it detects the pilot is incapacitated. 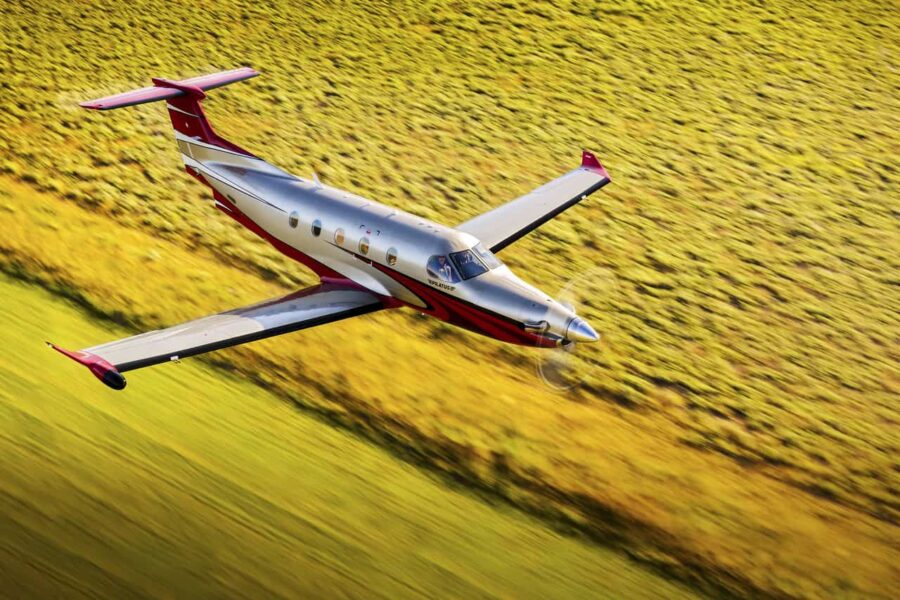 Sheep in wolf’s clothing aptly describes the Pilatus PC-12 NG  single-engine turboprop aircraft. It has been described as an “easy handling” pressurized passenger and cargo plane with “excellent STOL performance and slow take-off and landing speeds.” Do not be fooled.

The Pilatus PC-12 Ng packs a powerful punch in the form of a Pratt & Whitney PT6A-67P turboprop engine producing over a thousand horsepower. The engine provides the PC-12 NG with a higher airspeed of 280, improved climb rate, and better high altitude performance. Where the PC-12 Ng amazes is its luxurious cabin, which offers Business Jet class amenities while flying passengers into the most rugged terrains on earth.

Simply put, the PC-12 NG is among the rare class of pressurized single-turbine engine airplanes with the performance of a twin-engine aircraft and the functionality of a bush plane, a corporate transport, regional commuter, and utility aircraft. 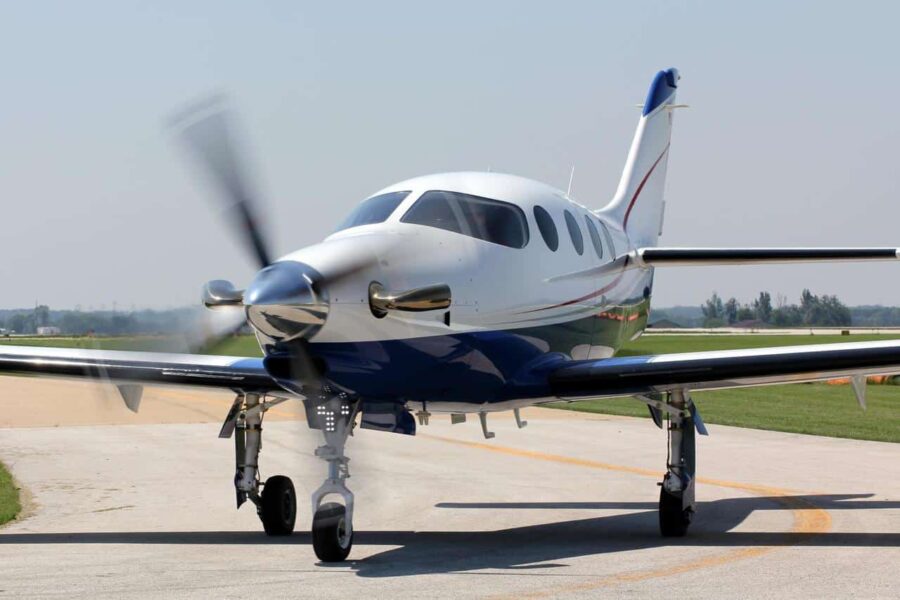 Epic Air’s LT is the only kit-built airplane on our list of the fastest single-engine airplanes. However, it would be a mistake to downgrade this carbon fiber airplane as another garage hobbyist project.

The high-performance numbers produced by the Epic LT are truly savage when compared with finished airplanes from industry-leading brands. The LT’s single Pratt & Whitney Pratt PT6-67A turboprop produces an incredible 1,200 horsepower providing this lightweight carbon fiber airplane with a 3,000 feet per minute climb rate, eventually topping out at 31,000 feet in less than fifteen minutes.

The top speed is an impressive 324 knots with a range of over 3,000 miles which isn’t bad for what is essentially a DIY assembly airplane. 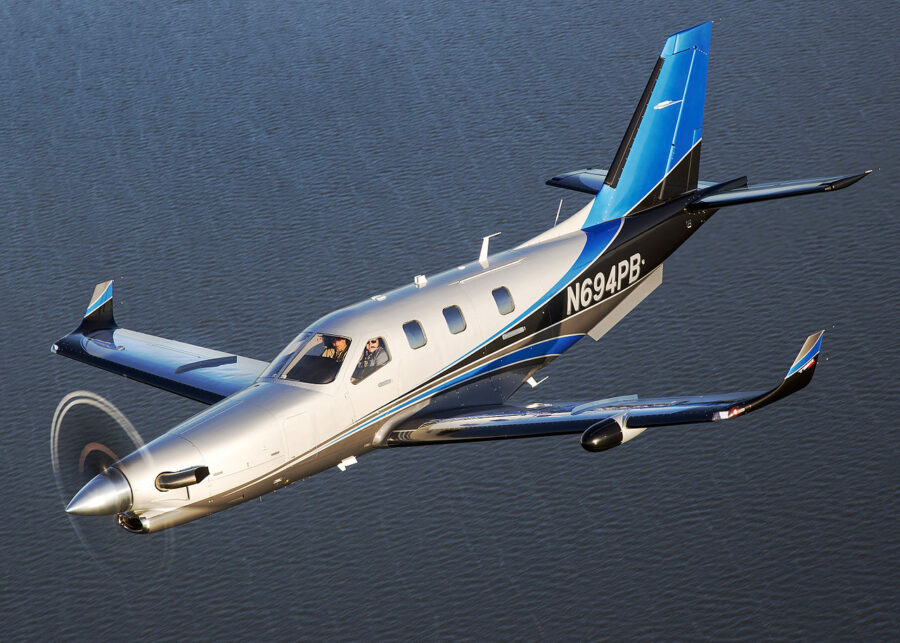 SOCATA (now DAHER) TBM 900, the second-fastest single-engine airplane on our list, is an offspring of the TBM 700, a joint venture product between Mooney international Corporation and SOCATA (a division of French aircraft production giant Aerospatiale). It was the fastest general aviation single-engine airplane for a while until the EPIC E1000 GX dethroned it in 2015. Pilots sit in a modern but simple cockpit with  The TBM 900 is not all about speed., 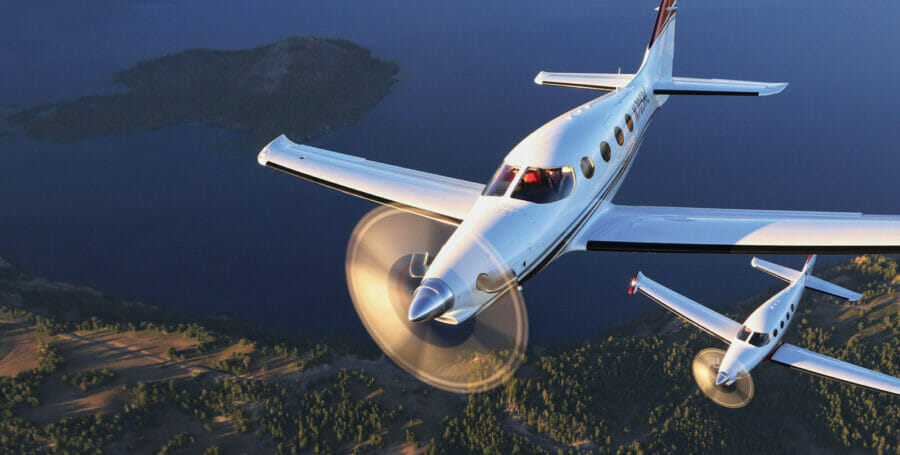 The Epic E1000 GX, our fastest single-engine airplane, has its humble origins in the Epic LS kit plane featured earlier. However, the big brother was destined for a bigger role. During the development of the E1000 project, Epic Aircraft stated its goal was to produce the fastest single-engine civil aircraft.

They achieved this feat by merging a carbon fiber composite airframe with one of the most powerful turboprop engines ever installed in a light airplane. The Pratt & Whitney Canada PT6A-67 turboprop produces over a thousand horsepower propelling the Epic E1000 to a top speed of 333 knots.

Inside the spacious cabin is seating for six people, including the pilots. The Epic E1000 GX cockpit is equipped with a Garmin G1000 NXi avionics system featuring goodies like a synthetic vision system and a long list of safety equipment. Owners can order their Epic E1000 with the club seating arrangement and passenger accessories like storage pockets, USB charging ports, adjustable tray tables, cup holders, and ambient lighting.