Bush planes are the 21st century equivalent of the covered wagon, steam locomotive, and pony express all rolled into one. They are mainly responsible for the survival of the modern-day frontier lifestyle by delivering essential supplies, food, medicine, mail, and equipment to people inhabiting remote, hard-to-reach areas.

Bush planes also provide commercial transportation services, medical services, and evacuation and fight forest fires. They are used for tourism, including African safari tours and search and rescue operations. The best bush planes are built to land on almost any surface, including gravel, grass, dirt, and mud landing strips located in the middle of nowhere. 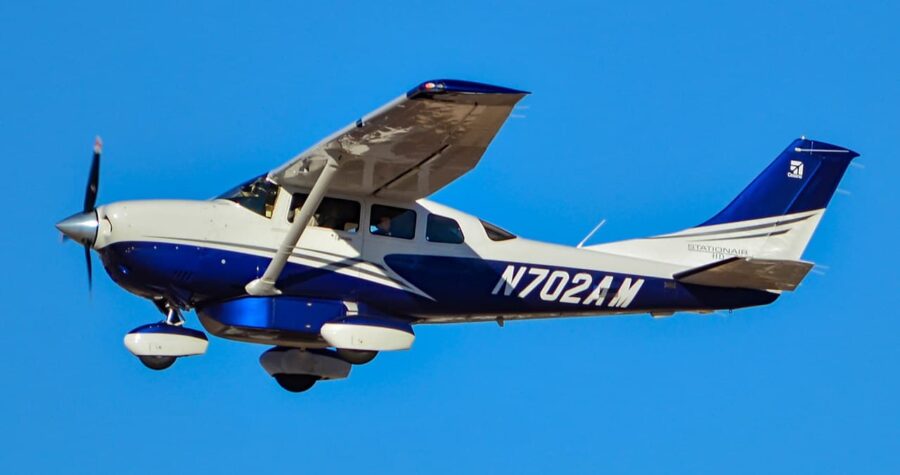 Bush planes can be extremely fun and forgiving to fly. A bush plane can be equipped with floats to land on rivers, lakes, or beaches. Bush planes fitted with skis are a common sight in isolated Alaska and Arctic communities during winter. Pilots can become certified to fly bush planes within a few days, and in return, you get to fly over endless miles of breathtaking terrain.

This article describes the 11 best bush planes of all time, the different bush planes, and why they are great aircraft. It contains helpful information for individuals interested in becoming bush pilots and those just curious about bush planes.

What are Bush Planes?

Bush planes are small rugged airplanes purpose-built for flying into remote and undeveloped locations around the globe where there are no regular commercial flight services or airports and runways. Larger bush planes can seat around nineteen passengers for scheduled commercial passenger flight services.

The earliest use of bush planes was in 1919 when Canadian pilots began using war-surplus Curtiss HS-2L naval aircraft to map forests and fight wildfires. Since then, they have become an indispensable general aviation aircraft providing an all-season lifeline to communities in the Australian Outback, the African savanna, Northern Canada, Alaskan Tundra, Amazon rainforest, and New Zealand mountains. 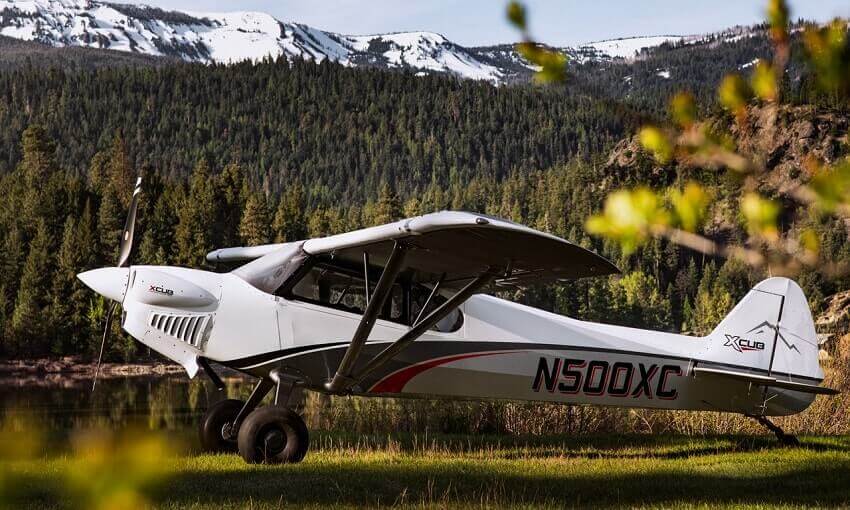 Requirements of a Good Bush Plane

Bush planes are designed and built to meet specific requirements. The standard design features and equipment that make a good bush plane include the following:

There are two broad categories of bush planes depending on the use of the aircraft. These include:

The 11 Best Bush Planes of all Times 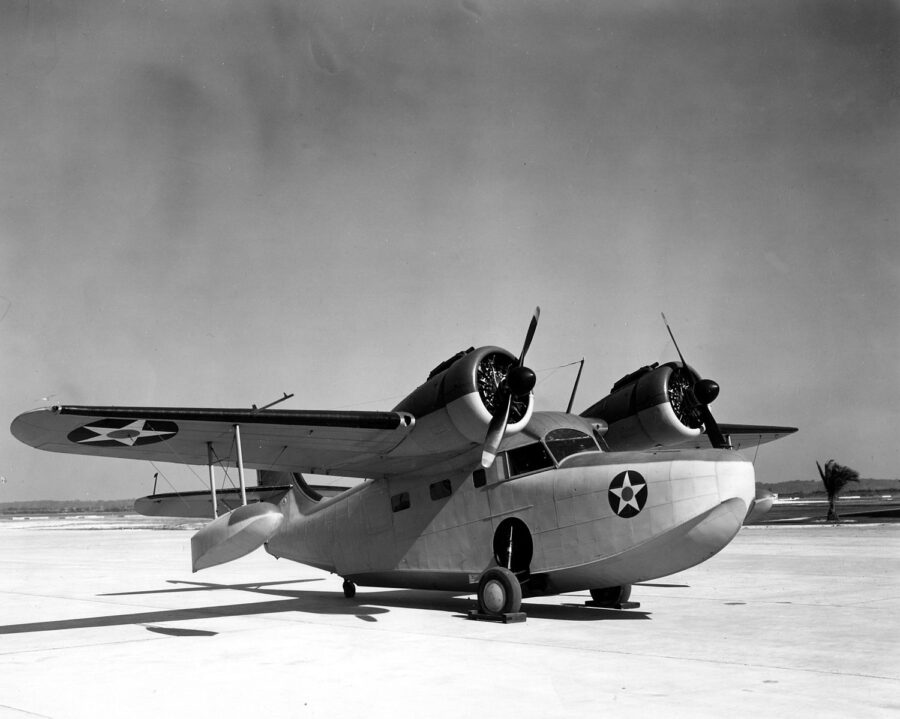 The G-21 Goose is a pioneering amphibious bush plane initially designed as a luxury commuter aircraft for the wealthy. However, the plane was successfully modified for military use during World War 2, and eventually, as a bush plane.

Over the years, the G-21 has undergone several modifications to its engines, avionics, windows, and landing gear to adapt the airplane for its new role as a bush plane. The G-21 Goose’s large interior size, which allows for a high passenger seating configuration (for a bush plane), and its amphibious characteristics make it an excellent choice for scheduled passenger flights into the remote communities and calm waters of Alaska Inside Passage located between the Gulf of Alaska and Puget Sound.

The G-21 can fly loads of tourists and their gear out into remote lakeside resorts or land on an improvised runway next to a mountain hunting lodge.

The Cessna 206H Stationair can be regarded as the workhorse of general aviation, and it can be found flying over large American towns or remote communities in the jungles of Indonesia. It is the perfect plane for short bush hops in the remote African wilderness. It can fly five passengers and their luggage to remote bush lodges making the aircraft one of the most popular bush planes among companies operating bush charter flights for Safari tourists in Kenya, Namibia, and Botswana.

The 206H Stationair powerful 310 hp Lycoming engine can handle any load hauling task you throw at it. It is commonly referred to as the “sports utility of the air” due to the rugged and beefy undercarriage capable of absorbing impacts from rocky and uneven runways. And it can be rigged with floats or skis for water landings and snowy/icy terrain. 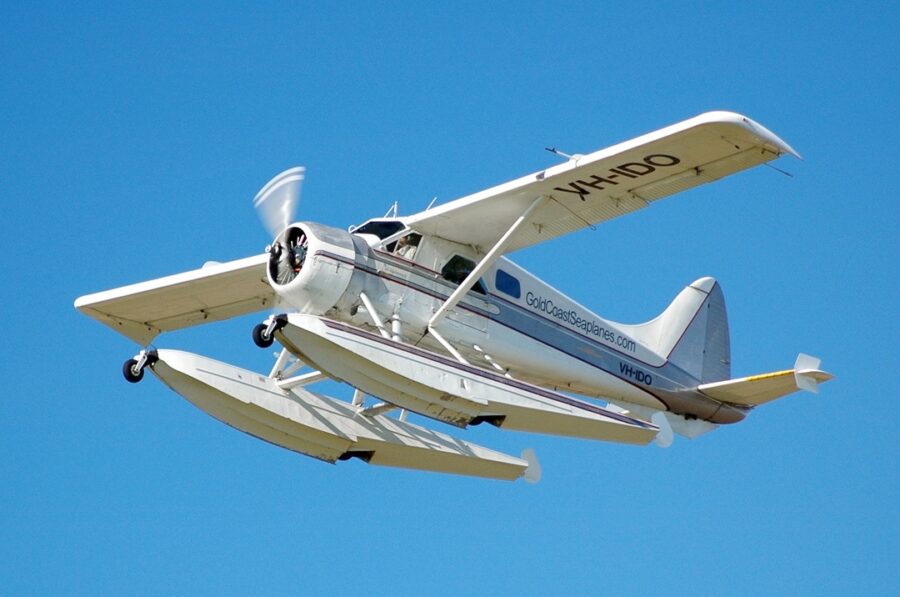 The de Havilland Beaver is an iconic Canadian bush plane that has been in service since 1947, and it is widely regarded as a 20th-century Canadian aviation engineering marvel. The DHC-2 Beaver is a perennial favorite of Canada’s bush pilots due to its enormous load-hauling capacity, gutsy performance, and impressive STOL capabilities.

The DHC-2 Beaver is the muscle plane of the skies. Its doors were designed to accommodate an oil drum. Over the years, scores of DHC-2 Beaver bush planes have delivered a diverse range of loads ranging from oil drums, construction equipment, medical supplies, All Terrain Vehicles, and camping gear to remote communities across Alaska, Northern Canada, and the Arctic. 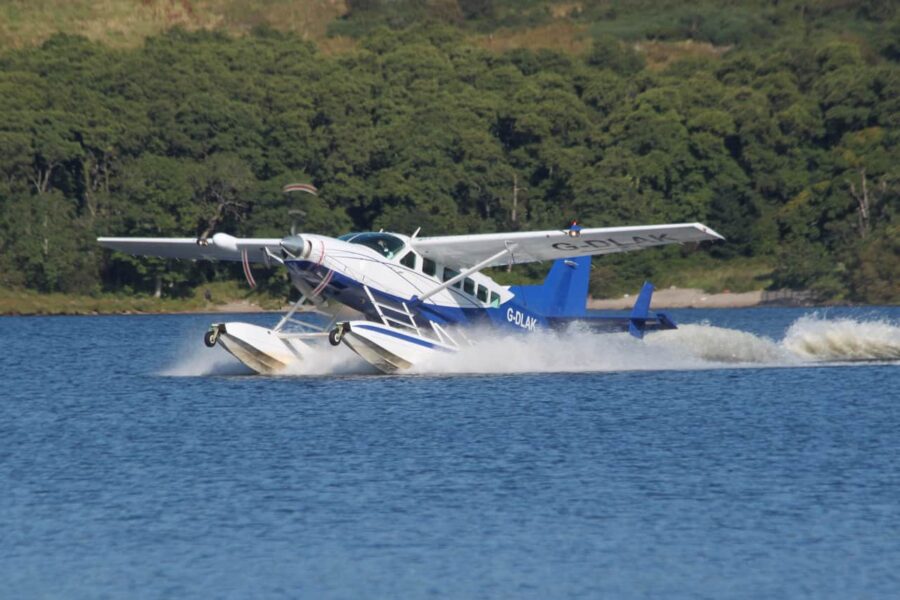 The Cessna 208 Caravan is one of the largest bush planes in production, and it is highly coveted among bush charter operators. It is easy to fall in love with this plane due to its vast payload capacity (8,785 Ib, 3,984.809 kg). Cessna 208 Caravans operating scheduled passenger flights can carry around eleven passengers with enough luggage space in its underbelly cargo pod and the left-side cargo hatch.

A primary advantage of the 208 Caravan bush plane interior is that it can be configured as a cargo compartment. Cessna also makes purpose-built freighter variants known as the 208B Cargomaster operated by FedEx. 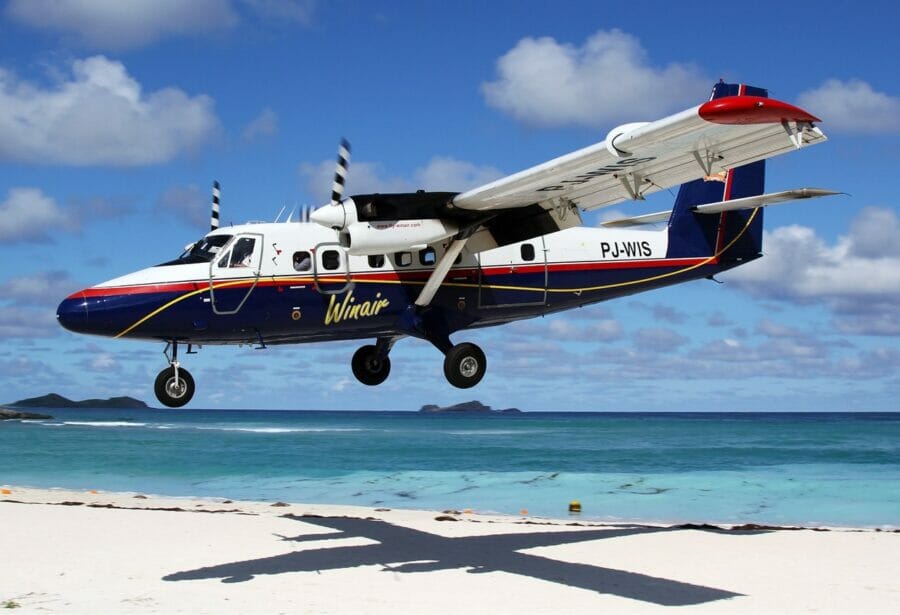 The DHC-6 Twin Otter bears de Havilland Canada’s hallmark of rugged reliability and longevity. The company ended production of the DHC-6 Otter in 1988. The bush plane’s impressive STOL performance alongside its exceptional amphibious capabilities, high climb rate, and the phenomenal pulling power of its twin turboprop engines warranted a comeback. 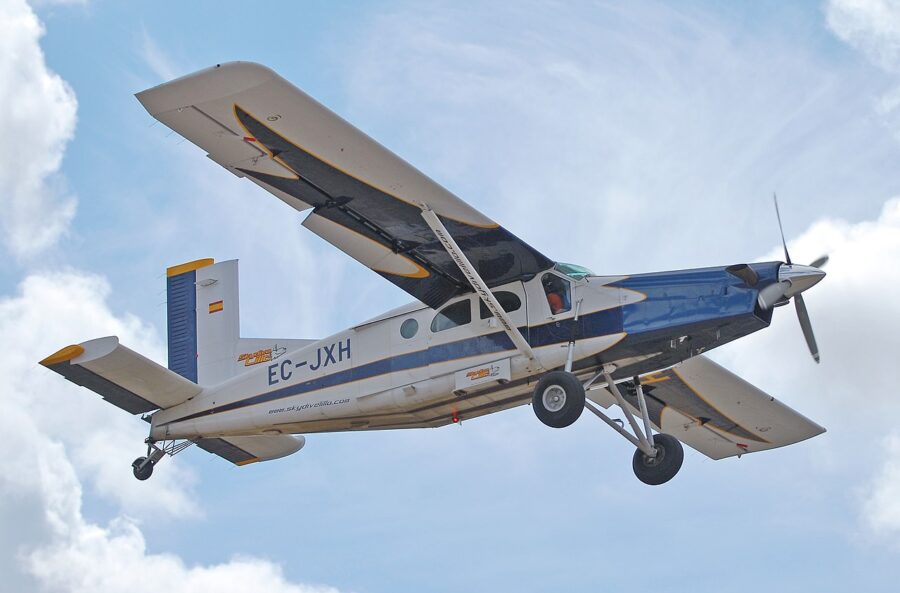 Although the production run of the Pilatus PC-6 Porter ended in 2019, the aircraft ranks among the most durable bush planes ever produced. For starters, it has impressive STOL  capabilities comparable only to rotorcraft.  It can land within 427 feet (130 m) of an airstrip, and it can take off within a distance of 640 feet (195 m), and there is more. In April 1960, a PC-6 prototype HB-FAN “yeti” with serial number 337 made a landing on the Dhaulagiri glacier in Nepal at an altitude of 18,865 feet (5,750 m). According to the Guinness Book of World Records, it was the highest landing of a fixed-wing aircraft.

PC-6 Porter pilots have described the aircraft’s flight attributes as surreal, and its handling characteristics are similar to that of a helicopter. During the Vietnam War, scores of PC-6 Porters operated hundreds of clandestine missions delivering troops and supplies to remote, high-altitude bases located on unprepared airstrips in the hot jungles of Southeast Asia. 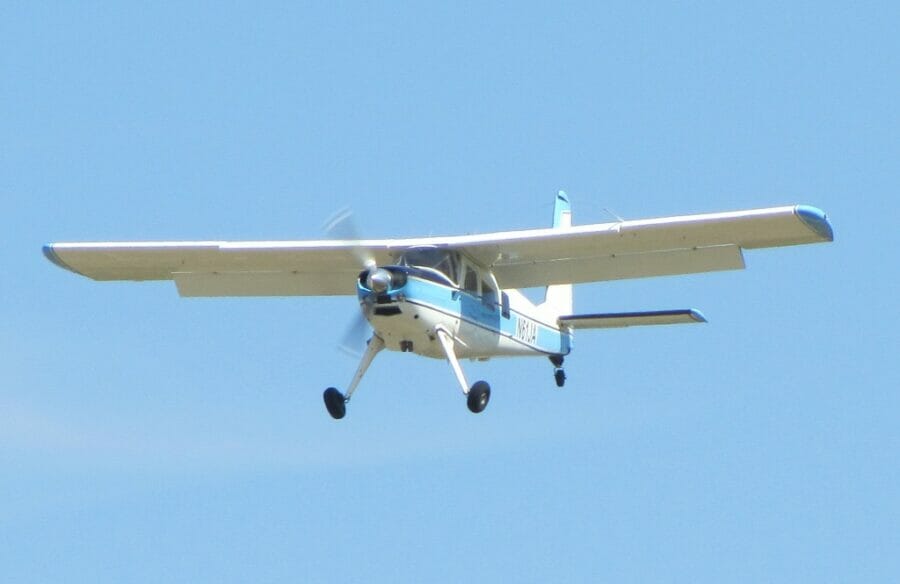 The Helios Courier may be a relatively obscure aircraft compared to the more popular Cessna 208 or the de Havilland Canada bush planes. It is a serious contender for the best bush plane of all time.

The Helio Courier is a military and civil patrol aircraft, a commercial passenger transport, a cargo delivery floatplane, and an essential lifeline for missionaries serving in isolated jungle outposts. The bush plane features an indestructible taildragger design which can be rigged with skis. Variants of the Helio Courier are a common sight over Alaskan skies, where the bush plane is considered by many as a guardian angel. 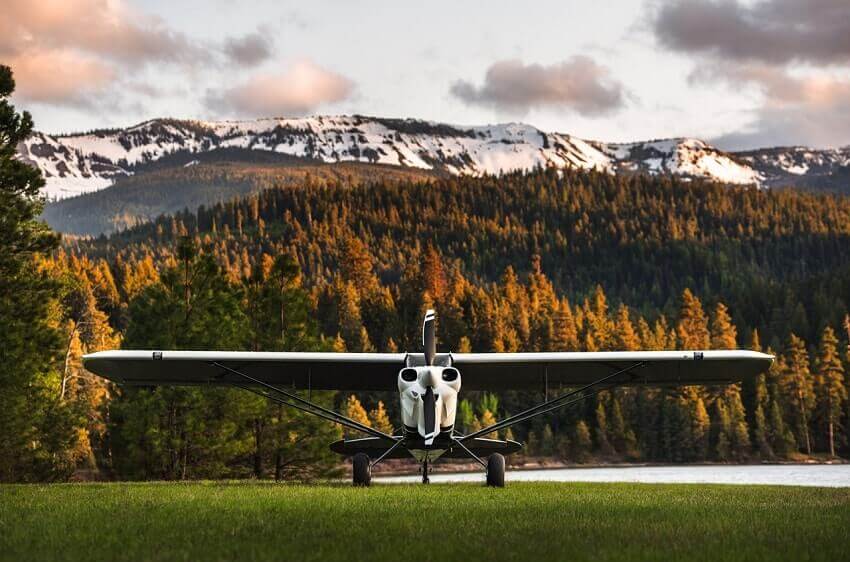 Ever since Piper introduced the Cub, the iconic yellow taildragger has stolen the hearts of many pilots. Many pilots have learned to fly on a Cub, but even more are eager to get their taildragger certificate to really start working on their stick and rudder coordination that’s so critical when flying a taildragger aircraft.

The Washington-based manufacturer CubCrafters built the XCub as a successor to the highly successful Carbon Cub. The company was founded in 1980 by Jim Richmond, who one day came back from a trip to Alaska, sold his home insulation business and decided to start rebuilding Cubs. CubCrafters was born. 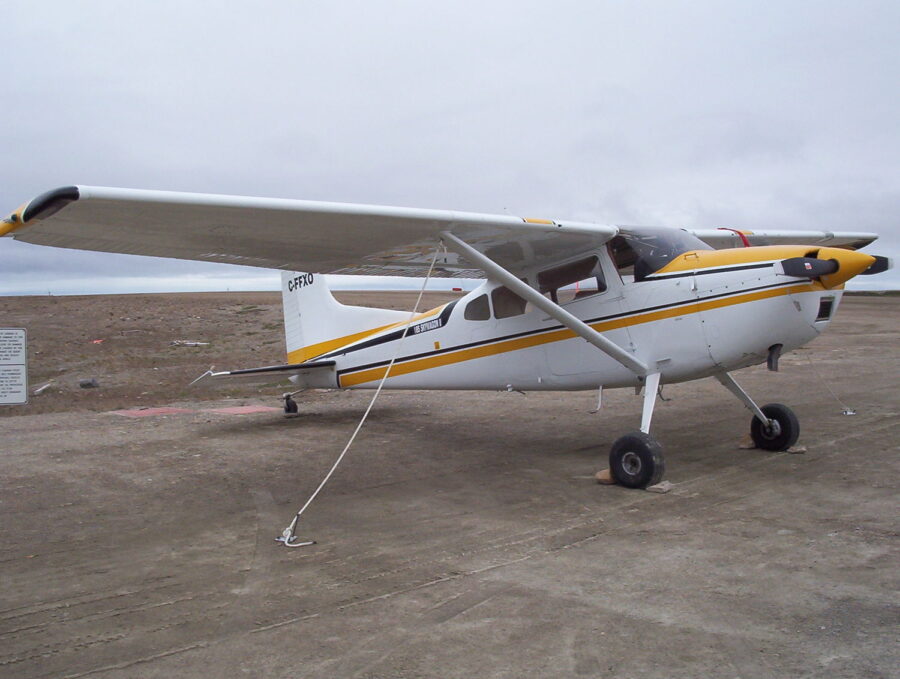 The Cessna 185 Skywagon bush plane is everything you expect from a Cessna, an aircraft manufacturer renowned for making excellent bush planes. It fits into the small to medium-sized bush planes category, and it is suitable for flying large cargo to small remote airstrips. The 185 Skywagon can fly in and out of tight spots that larger bush planes can’t.

The aircraft features a taildragger undercarriage design that is an essential element for successful bush planes. The undercarriage can be fitted with skis or floats to increase the Skywagons versatility. 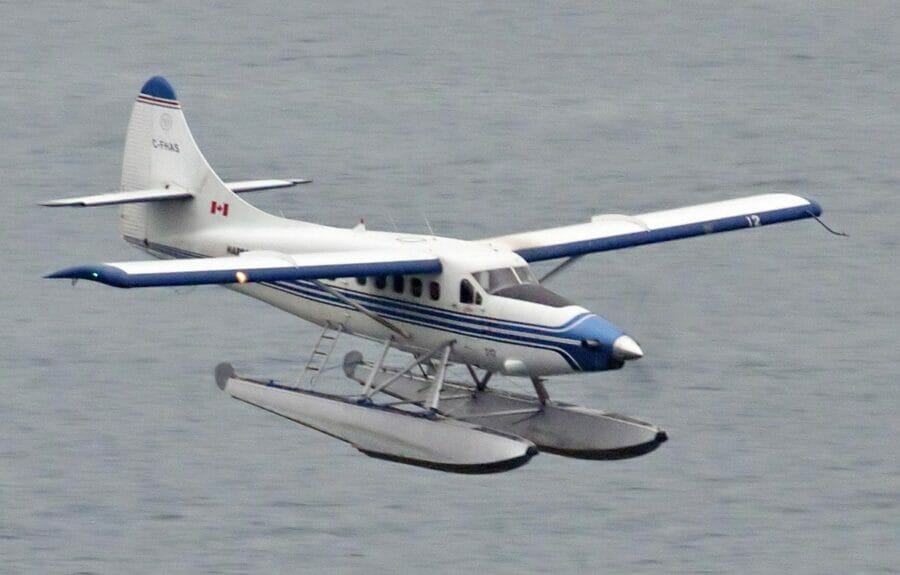 Initially called “King Beaver” by de Havilland, the DHC-3 Otter is a larger and more powerful replacement to the successful DHC-2 Beaver. It is the design basis for the more popular DHC-6 Twin Otter. It is available in a single or twin-engine configuration, depending on the operator.

The Otter is used for commercial passenger operations in Alaska and Canada. It has impressive STOL capabilities as the DHC-2 Beaver, making it a popular bush plane with military and civil defense operators. The Otter can be fitted with floats and skis for water landings and operating on snowy/icy terrain. Several bush pilots have described the Otter’s incredible range as a reason for preferring the aircraft over other bush planes. 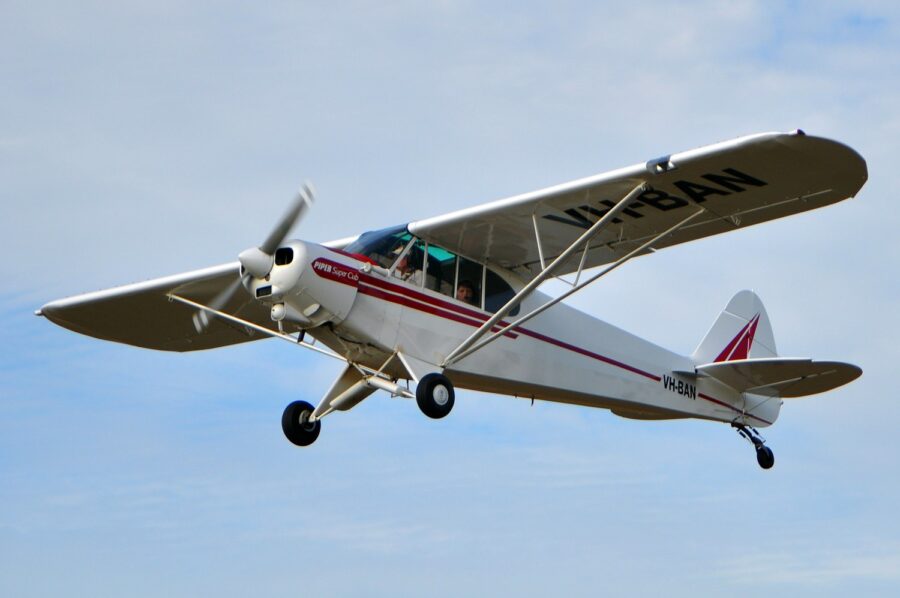 The Piper PA_18 Super Cub is the dirt bike of bush planes, and if you have enough money to build a luxury fishing lodge beside a scenic mountain top lake, this is the best bush plane to get you there. The Super Cub may be one of the smallest bush planes, but it has a knack of landing in places where larger and more powerful planes dare not.

This bush plane is a STOL champ needing only 350 feet (106.8 m) distance to land or take off from virtually any surface, opening up the possibility of a quick trip into the most remote and unspoiled outlands. The Piper rugged undercarriage can be fitted with large tundra tires or a pair of floats to notch a landing on lakes, tundra benches, and gravel bars. You can add a couple of skis if you need to land on a glacier.