16 of the Biggest Helicopters in the World Ever Built

Maybe it is just me, but I am always fascinated seeing large helicopters lift their bulky fuselages off the ground and into the skies. The sight of those giant flying blobs often rouses a bit of awe. To an average person, helicopters are those annoying slow and expensive whirlybirds the size of small crossovers often used by the police, television stations, and the meteorological service. But big helicopters perform more significant roles. They help fight wars and large fires, evacuate people from disaster areas, search for missing aircraft or ships, and you don’t always get to see them unless something goes terribly wrong.

The list consists of a wide variety of big birds ranging from the largest helicopter of a particular class, country, or era, to the biggest helicopters in the world. 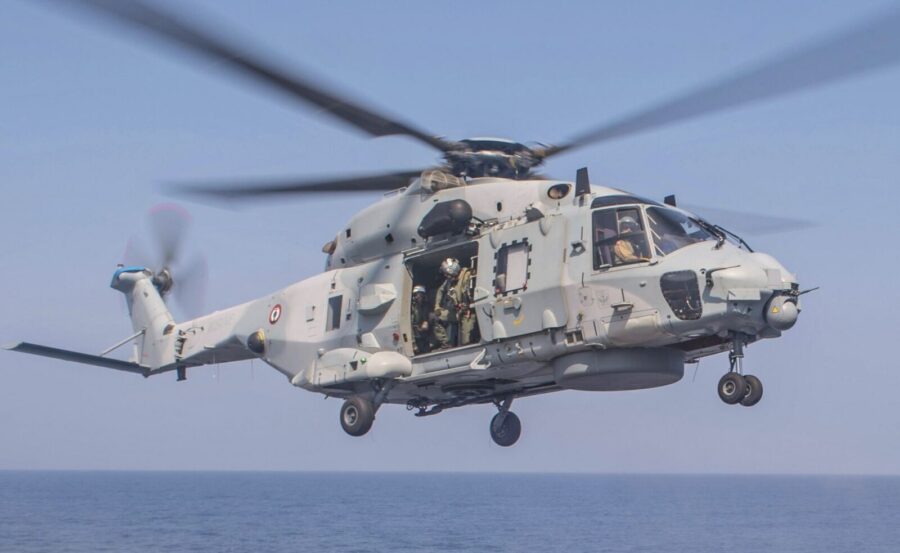 The NH90 is the first helicopter in the world to have a full fly-by-wire flight control system. 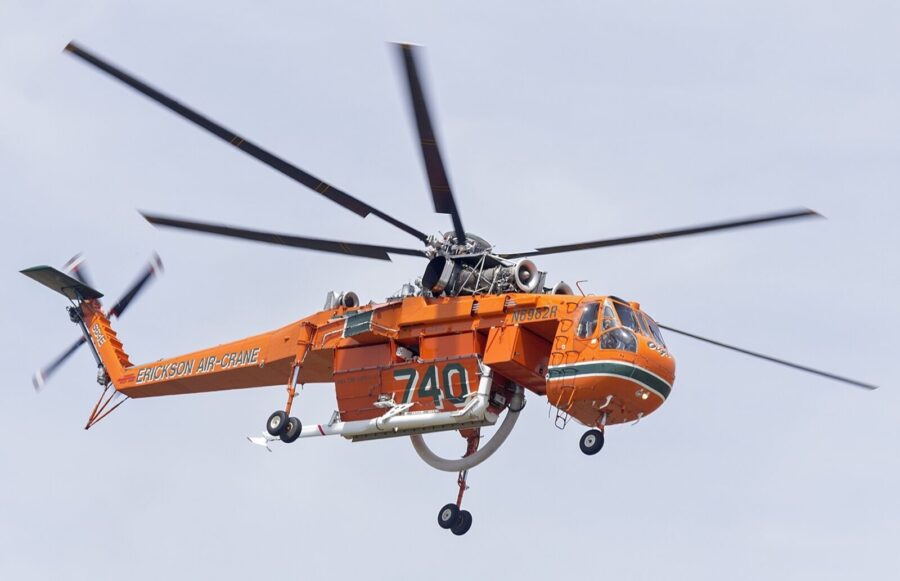 The S-64 Aircrane is the biggest helicopter aerial crane. It was developed from the Sikorsky S-64 Skycrane, the civilian variant of the CH-54 Tarhe, once the world’s largest helicopter. In 1992, Erickson Air-Crane bought the manufacturing rights to the S-64 Skycrane. Currently, the company is producing S-64 Aircranes for companies, governments, and non-governmental organizations. The S-64 Aircrane is presently the biggest helicopter in the world used extensively by fire fighting services around the globe to control bushfires. It is also used for logging activities and heavy lift construction.

Each S-64 Aircrane has an individual name. Famous examples are the Australian firefighting Aircanes christened “Elvis,” “The Incredible Hulk,” and “Isabelle.” The S-64E seen in popular media images lifting the Ontario CN Tower into place is nicknamed “Olga.” 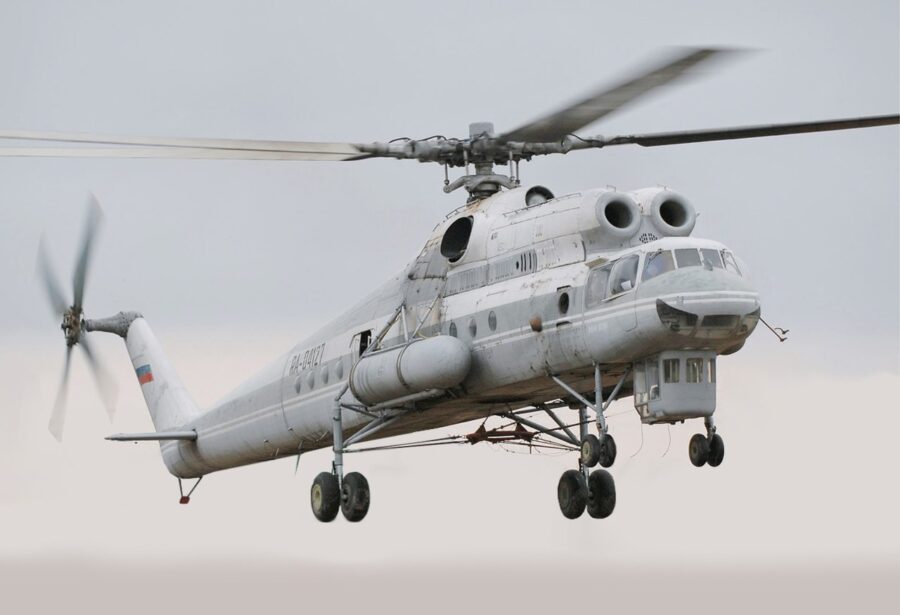 The Mil Mi-10 (NATO code name: Harke) was the Soviet Union’s effort to produce an aerial crane helicopter. It was the country’s largest helicopter development to integrate external payloads into the fuselage design. Big helicopters are often equipped with unusual features designed to help them serve their intended purpose. The Mi-10 is fitted with a wide track, four-long-legged landing gear to straddle huge cargo like military tanks. The Mi-10 also has a short-legged version with an identical fuselage to its long-legged variant. 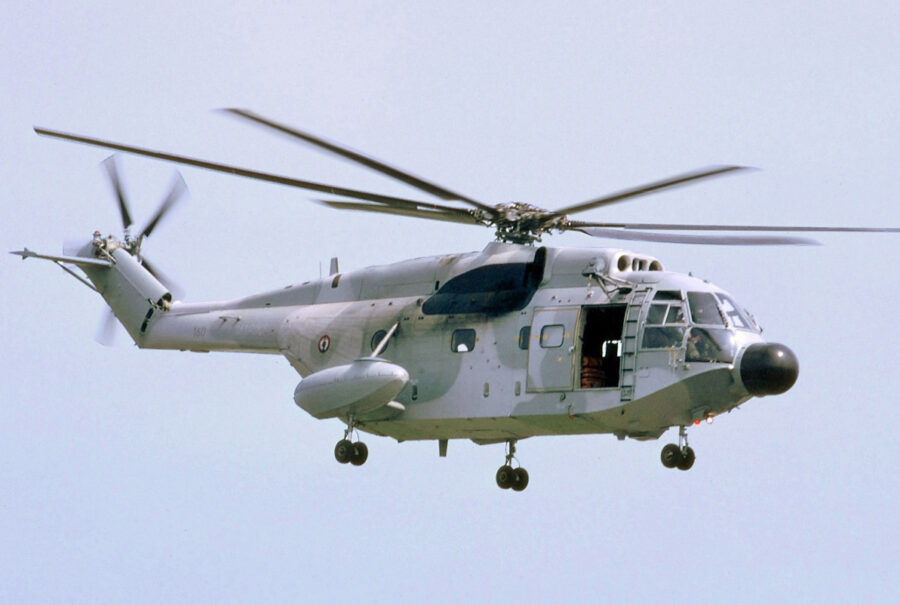 The SA 321 Super Frelon once held the record for the world’s fastest helicopter and Europe’s most powerful helicopter. 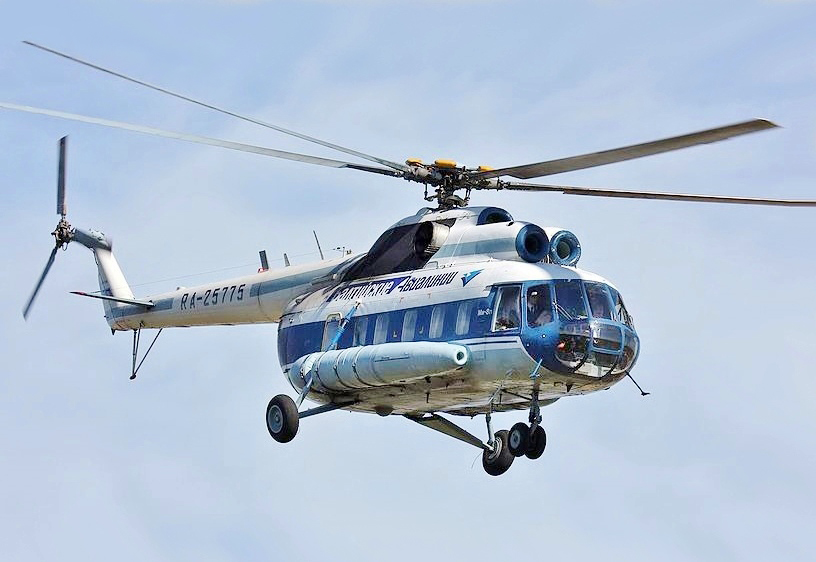 Codenamed Hip by NATO observers, the Mi-8 is a medium-lift twin-turbine multirole gunship, troop transport, VIP chauffeur, fuel tanker, recon aircraft, and cargo helicopter. It probably embodies all the big helicopters from the Soviet era. The aircraft’s designers insisted on creating the biggest helicopter globally, although they fell short of that mark. The Mi-8’s sheer size allows it to excel in many roles that very few large helicopters can perform.

The Mi-8 is one of the most produced helicopters in the world. It is among the top three helicopters commonly used in military operations and the largest helicopter produced outside the United States in active service. 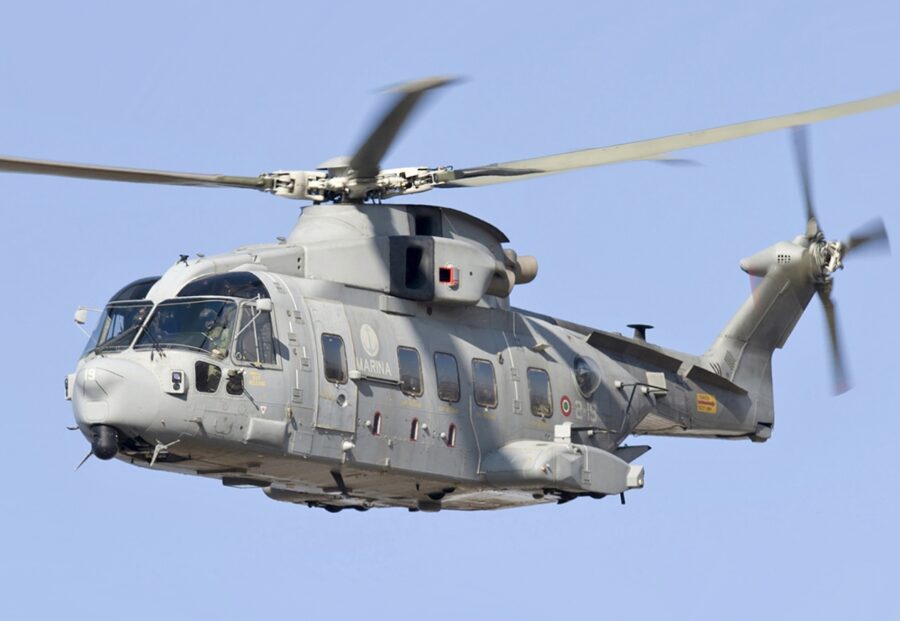 The AgustaWestland AW101 (marketed as Merlin) is proof that large helicopters are not just for military operations. Conceived as a joint venture between Britain and Italy, the AW101 (pre-merger designation EH101) is a medium-lift military helicopter that can be configured for various civilian uses. Big helicopters have a distinct advantage over smaller aircraft operating in the air taxi industry. And Merlin’s civilian operators took advantage of its enormous size to create a spacious and plush cabin making the AW101 a popular luxury transport and a favorite of VIPs around the globe.

Before being adapted for luxury air transport operations, the AW101 was initially designed for hunting down and sinking submarines.

The Changhe Z-18 is a medium-lift troop and cargo transport helicopter and one of the several big helicopters in service with the People’s Liberation Army of China. Also known as the White Heron, the Z-18 is closely related to European-made large helicopters’ duo; the Avicopter AC313 and Aérospatiale SA 321 Super Frelon. The White Herons’ development is one of the largest helicopter programs in China, and engineers made extensive use of titanium and composites in the fuselage design. 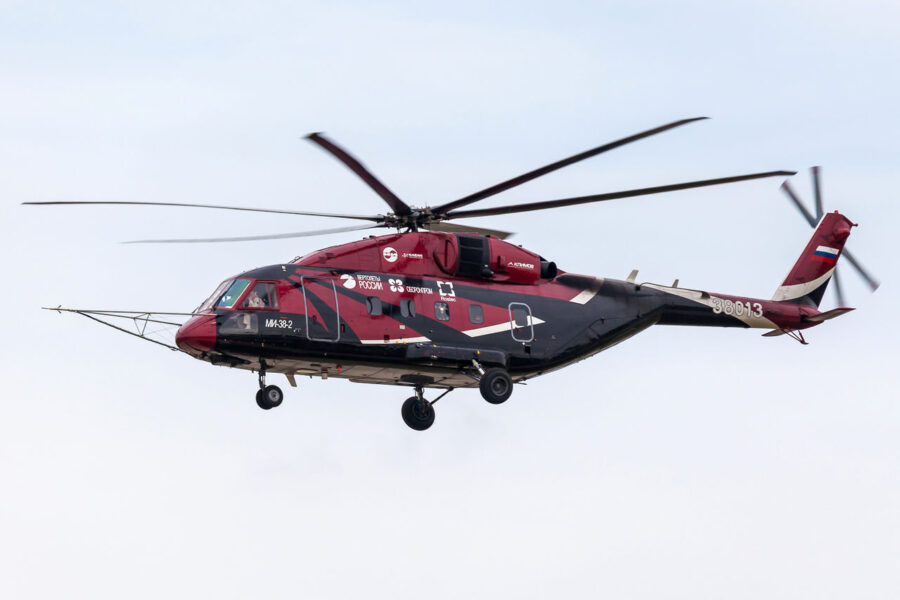 The Mi-38 is Russia’s largest helicopter development after the fall of the Iron Curtain. No longer constrained by Cold War ideologies, Russian engineers focused on developing the Mi-38 as a commercial helicopter for the international market, directly competing with big helicopters like the AgustaWestland AW101. The Mi-38 is probably the biggest helicopter built with highly-durable composites rated for optimum performance in tropical and sub-zero conditions.

The Mi-38 has broken numerous records set by earlier large helicopters, including two for the fastest climbing speed. The first is for reaching an altitude of 3,000 meters (9,843 feet) in six minutes, and the second is for flying to a height of 6,000 meters (19,685 feet) in 10 minutes and 52 seconds. 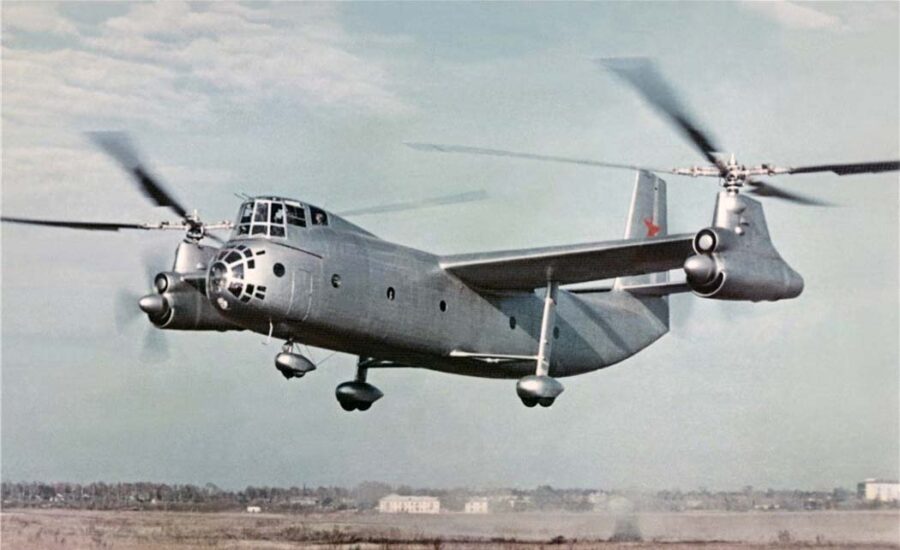 Although its unique design and enormous size place the Ka-22 firmly in the league of large helicopters of the Cold War era, its operational history is less than stellar. Conceived initially as a fixed-wing rotorcraft with a propulsive airplane system to maximize speed and cargo capacity for military operations. The Ka-22 never made it out of the testing phase due to its unusual and complex design problems. After two consecutive fatal crashes, the big helicopters were deemed unsafe for flight, and the Ka-22 was abandoned after only four types were built. It would be more than three decades before the United States would successfully operate a fixed wind helicopter design. 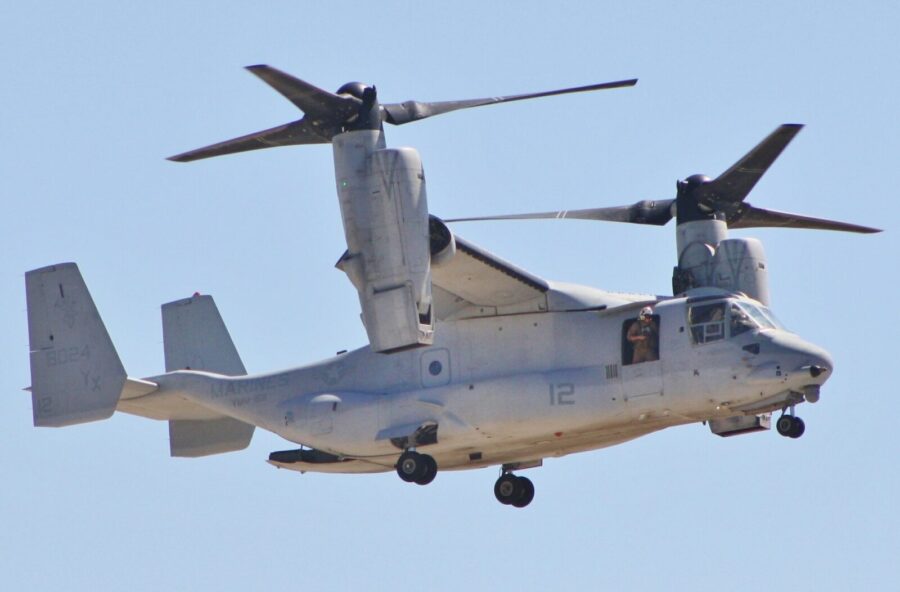 The V-22 Osprey is the largest helicopter fixed-wing design in active service with a military operator. This medium-lift aircraft is equipped with wing-mounted engines that can rotate 90 degrees to land like a helicopter. The V-22 can perform aerial fuelling, rough terrain landings, and aircraft carrier operations thanks to a neat party trick of folding rotors and rotatable wings. Despite its numerous critics, the Osprey combines the battle-field practicality of big helicopters with a cargo plane speed and payload capacity. The V-22 Osprey development remains one of the most expensive, longest, and biggest helicopter programs in the United States. Fortunately, these large helicopters have been successfully deployed as troop and cargo transport with the four US armed forces.

The development of the V-22 Osprey (JVX aircraft program) was inspired by the bitter failure of Operation Eagle Claw in Iran. The Pentagon realized the need for large helicopters to perform Vertical-Take-Off-And-Landings (VTOL) and serve as a high-speed troop transport. 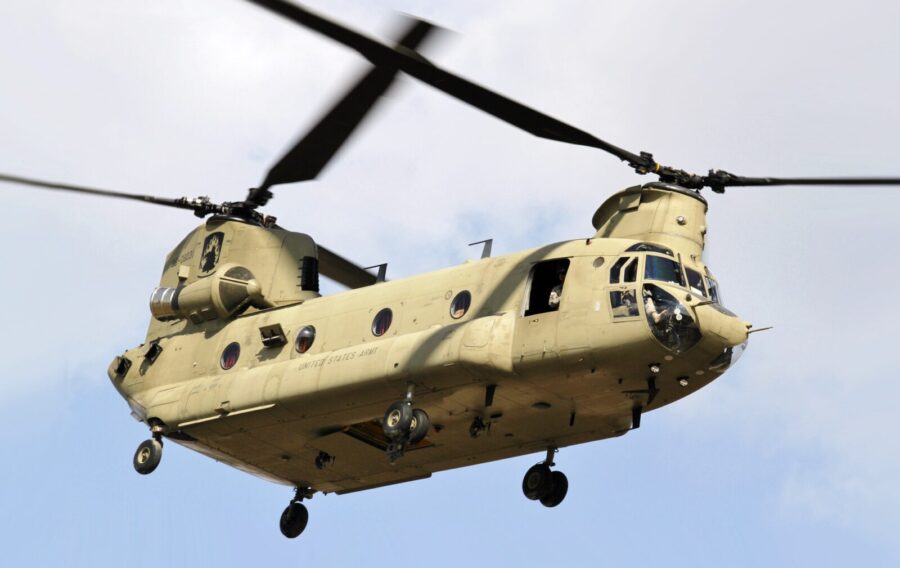 The Chinook is a military heavy-lift transport and one of the easily recognized big helicopters ever produced. Initially designed by Vertol as V-107 before the company’s acquisition by Boeing. The military would further develop the existing design and designate the resulting twin-rotor large helicopters as CH-47. The Chinook was the biggest helicopter operated by the United States Army at its launch. The civilian version of the Chinook is the Vertol 234. It is commonly used for aerial fire fighting, disaster relief, logging, heavy construction lifting, civil defense, mining, and oil extraction operations.

The Chinook CH-47 is one of the fastest large helicopters in service with the United States army with a top speed of 310 kph/200mph. It is also the largest helicopter to remain in continuous production for more than 50 years, with upgraded versions of the CH-47 expected to continue operating beyond 2060, a century after its launch. 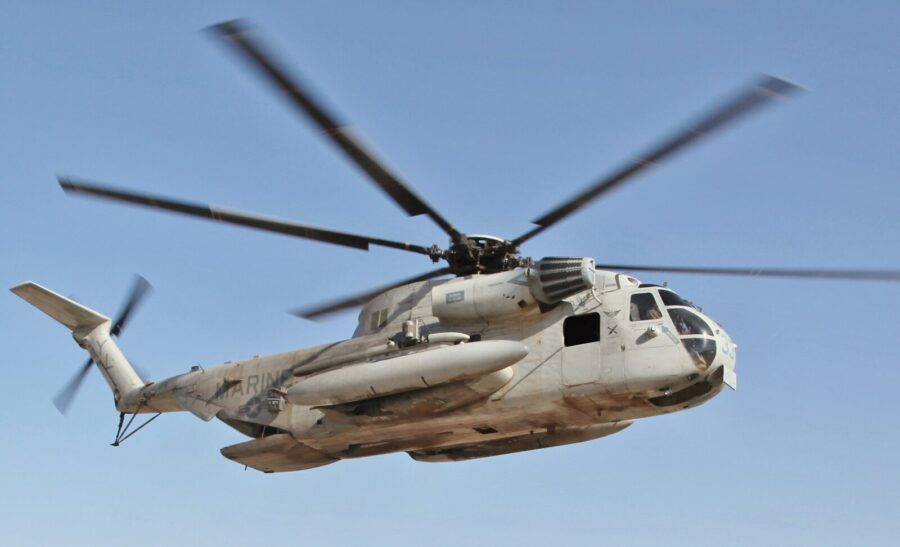 The CH-53e Super Stallion was developed from the highly successful but less popular CH-53 Sea Stallion heavy-lift cargo helicopter. It was the largest helicopter in the service of the United States military forces at the time of its launch. The Sikorsky Aircraft has a long history of producing powerful and reliable large helicopters for military and commercial operations. The Super Stallion was designed to fulfill several multirole functions with the U.S Marine Corps. The United States Navy operates the CH-53 variant.

The CH-53e Super Stallion is one of the most powerful big helicopters ever manufactured in the United States. It can airlift other large helicopters, including disabled CH-47 Chinook and Huey helicopter transports. 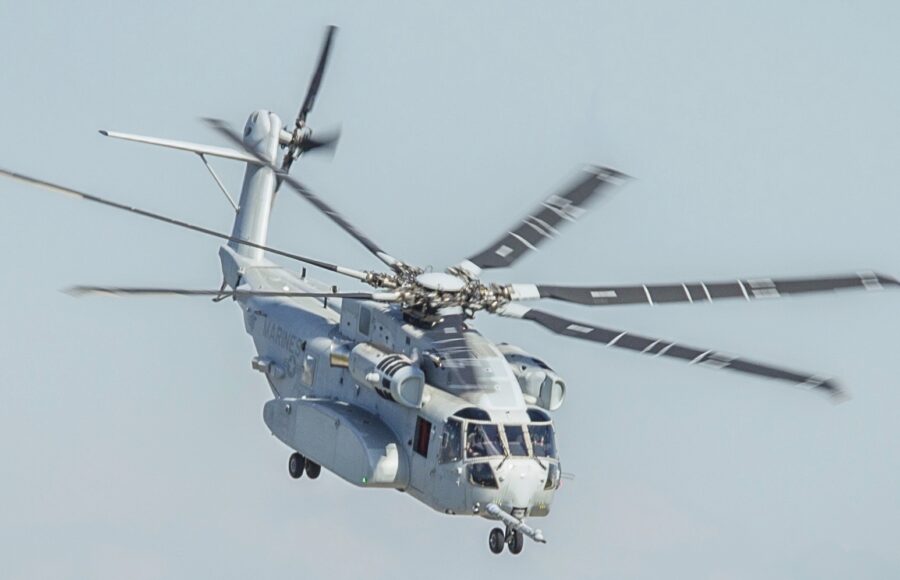 The CH-53k King Stallion heavy-lift cargo and troop transport helicopter is a derivation of the CH-53e Super Stallion. Both big helicopters were manufactured by Sikorsky Aircraft, but it was limited to military use, unlike its predecessor. The CH-53K is designed for military and civilian operations, and it is currently the largest helicopter in United States military service. 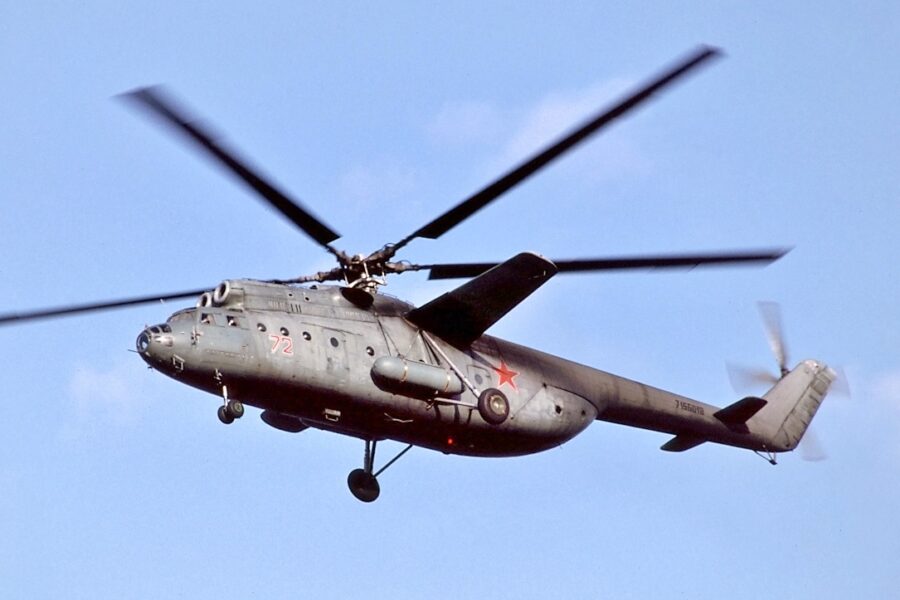 The Mi-6 holds the record for the first Soviet turboshaft-powered production helicopter. It also beat other large helicopters to claim the Sikorsky trophy in 1961 for the fastest operating speed (300+ kph/186+mph). 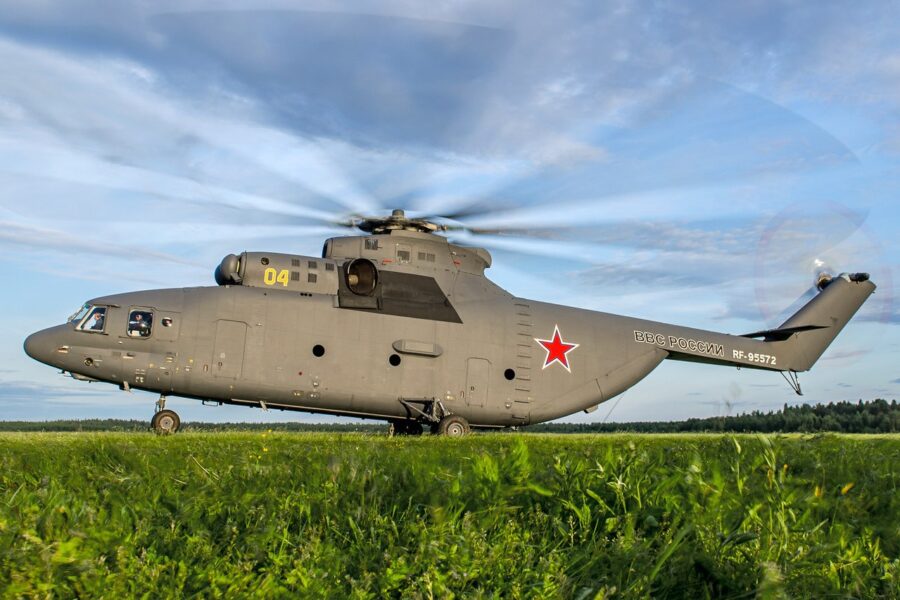 This Soviet heavy-lift helicopter, code named Halo by NATO observers, is the biggest helicopter in the world in serial production. It is also more powerful than other large helicopters currently in or out of serial production. The Mi-26 was designed for both military and commercial operations. Since it debuted at the Paris Air Show in 1981, the Mi-6 has served commercial and cargo operators in various multirole capacities. The MI-26 is famous for recovering big helicopters, including a disabled two U.S. Army MH-47E Chinook helicopter from an Afghan mountainside and a Norwegian Air Force Westland Sea King from Mount Divgagáisá in 2012.

The Mi-26 has a similar cargo capacity as a C-130 transport aircraft. 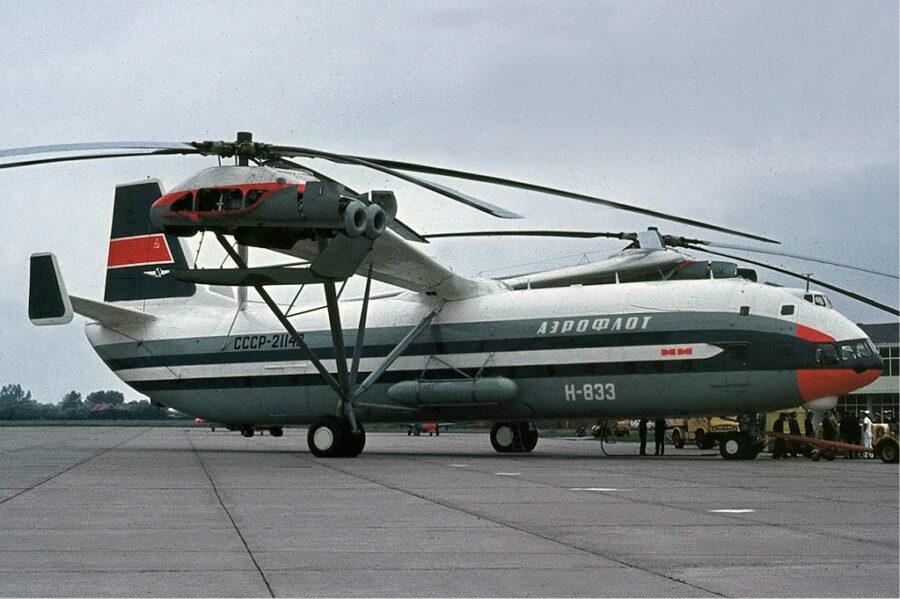 Code named; Homer by NATO observers. The Mil V-12 is the biggest helicopter in the world. Cold War realities required large helicopters that could deploy intercontinental ballistic missiles to remote launch sites. To fulfill its role, Mil engineers designed a transverse rotor system that eliminates the need for a tail rotor but with enough power to lift the 100-ton helicopter into the skies. Although, initial tests were promising. The Soviet Union built and tested only two prototypes of this heavy-lift helicopter before canceling the program.

The Mil V-12 set several world records, three of which remain unbroken for the highest-flying helicopter carrying a 40-ton payload.