You rarely hear people use ‘affordable’ and ‘private jet’ in the same sentence. Private jets are expensive toys of wealthy individuals, and the image of one evokes an ostentatious and lavish lifestyle. However, a growing trend among private jet users is to utilize their private jets as a time or business-saving tool, much like how we use our cars.

In response, aircraft manufacturers have developed a class of light or personal private jets to cater to the desires of individuals looking for flexibility and affordability during the hiring or buying of private jets. 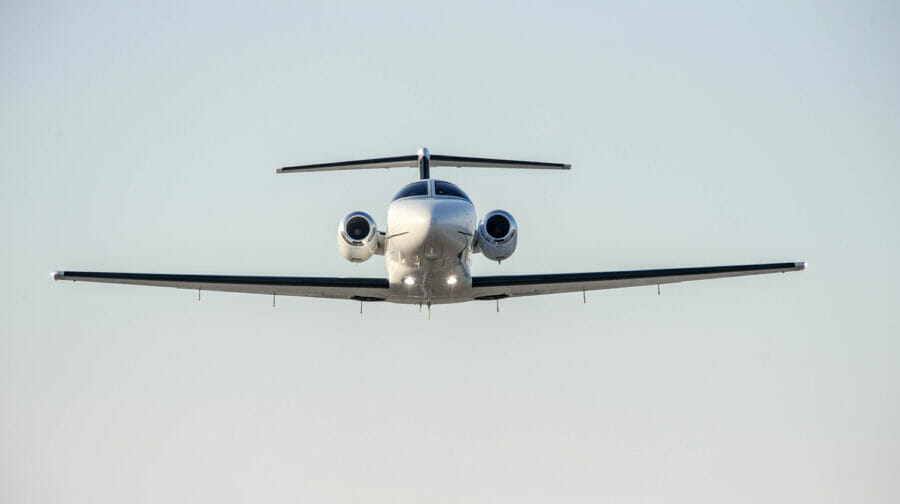 So, what do we mean by most affordable private jets?

Affordable private jets are lower-priced aircraft, usually in the Very Light Jet (VLJ) or Light Jet category. These aircraft range from single-pilot (often referred to as ‘pilot/owner operated’) with seats for four to seven people and a maximum take-off weight MTOW of less than 10,000 pounds, to light business jets with larger cabin, higher take-off weight, and improved range.

The primary attraction of new or pre-owned affordable private jets to owners and operators is their lower acquisition and operating costs. And private jet manufacturers like Cessna, HondaJet, Embraer, and Cirrus are taking notice of this trend.

This article lists the ten different cheapest private jets for a discerning buyer. And while the affordable business jets options here range in price and class, they provide you with a good idea of the markets’ prices for the cheapest private jets, whether new or pre-owned.

The Best Private Jets Under $2 Million 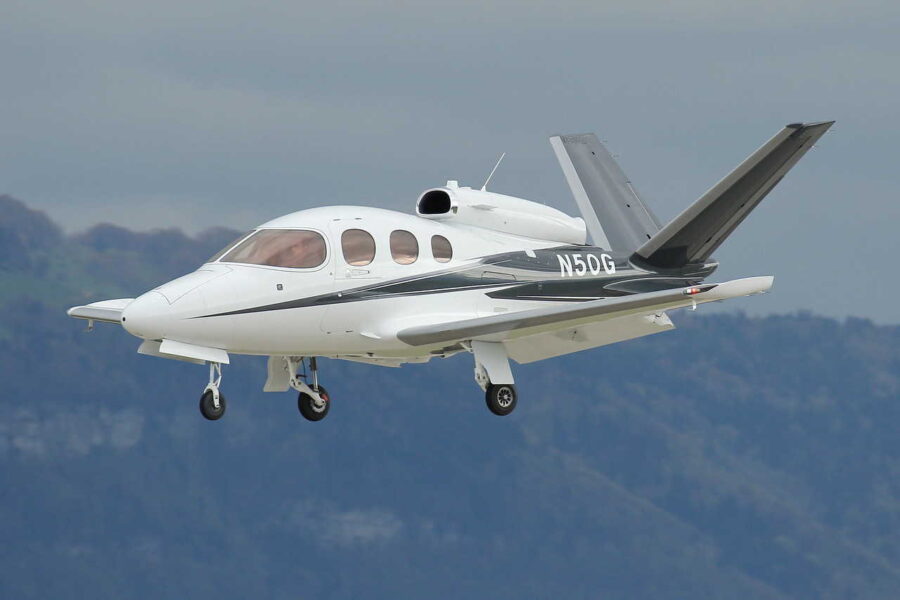 There is no better way to enter the world of executive jet ownership than owning a Cirrus Vision SF50 Jet. This is one of the cheapest private jets with around one million seven hundred and fifty thousand dollars. It is powered by a single rear-mounted Williams International FJ33-5A turbofan engine, delivering 1,800lbs of thrust. The SF50 is a product of a ten-year development process, resulting in one of the safest and most affordable private jets on the market.

The Federal Aviation Authority FAA rates the SF50 for single-pilot operations. Owners who are certified pilots can quickly fly the airplane using its state-of-art Garmin G1000 electronic flight instrument system (EFIS). The Cirrus Vision jet boasts a spacious and high-quality cabin that can seat around seven people. The aircraft’s unique design features  include an aft-mounted engine pod and a V-tail assembly instead of a conventional rudder.

Despite being one of the cheapest private jets on the market, the SF50  has an impressive suite of safety equipment lacking in more expensive private jets. These include the Cirrus Airframe Parachute System (CAPS), a whole-plane ballistic parachute recovery system developed by Cirrus Aircraft, and the Garmins Emergency Autoland System, which can automatically land the plane should the pilot become incapacitated.

The Cirrus Vision Jet offers excellent value and versatility and low operating costs for an aircraft at its price point. Currently, it is one of the most sought-after private jets under $5 million by customers who are in the market for fast, safe and affordable business jets for personal use for air taxi services. 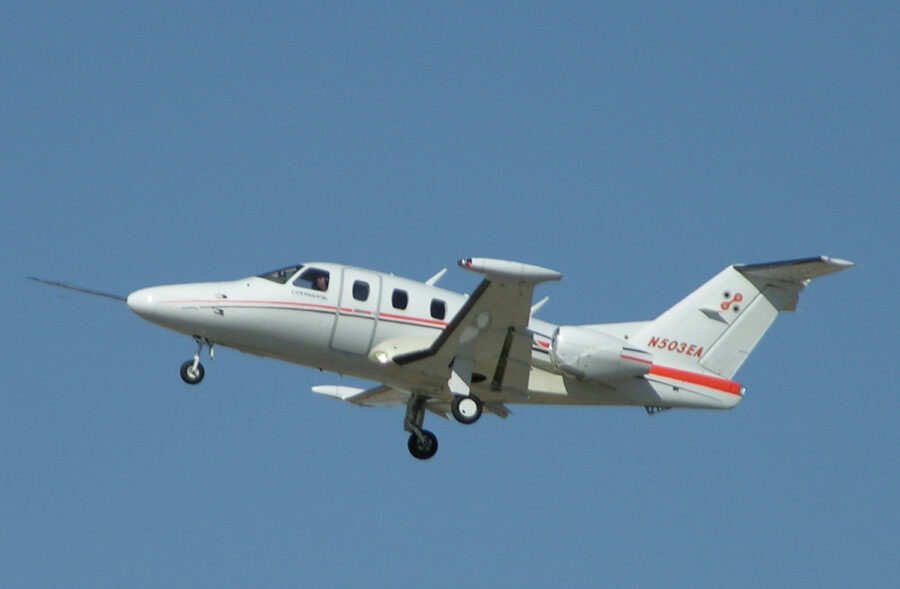 The Eclipse Aerospace EA500, also known as the Eclipse 500, is the first-ever private jet to be produced, marketed, and sold under the new class of Very Light Jet or personal jet. It is conceived by Vern Raburn, Eclipse Aviation founder, and former CEO, as a revolutionary type of affordable business jet with a starting price tag of under a million dollars.

The EA500 has maximum seating for six passengers, and unlike the single-engine Cirrus Vision SF50 VLJ. And its power comes from a couple of lightweight Pratt & Whitney Canada PW610F turbofan engines mounted on both sides of the rear fuselage.

Pilots who step into the Eclipse 500 cockpit may be forgiven if the all-glass cockpit intimates them with an integrated Avio NG avionics system. This groundbreaking electronic flight instrument system allows pilots to monitor all the aircraft inflight performance parameters and provides high-resolution displays for the CNS system, enhanced digital audio communications, and upgrading capabilities for next-generation avionics systems.

The EA500 has a spacious interior comparable to more modern VLJs. However, the emphasis of the aircraft is on providing high-quality amenities in an affordable private jet package. Conveniences such as toilets are eliminated from the cabin despite significant public outcry because it is not considered unnecessary for the aircraft’s purpose. 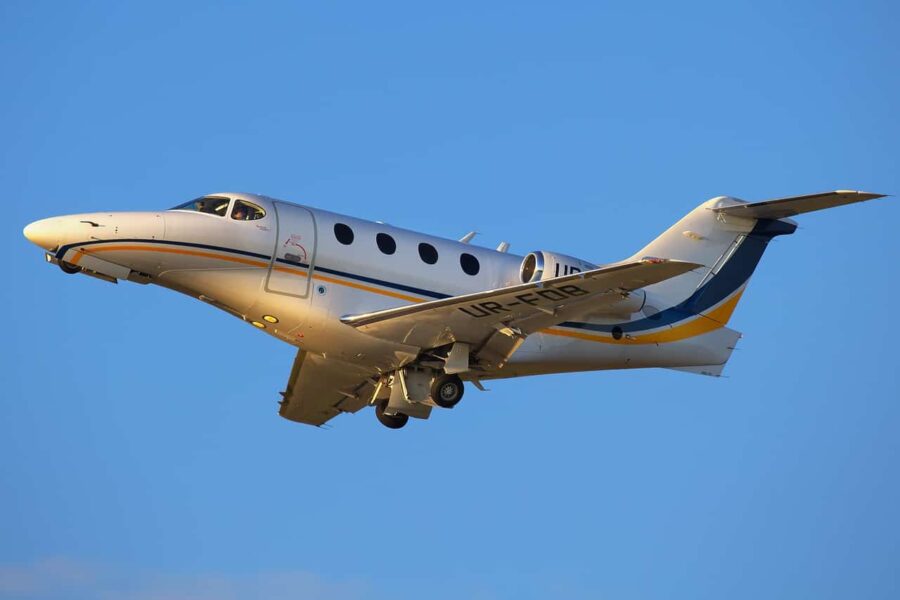 Marketed as the “Little Big Jet” during its 2001 launch, the Beechcraft Premier 1 is a single-pilot, twin-engine aircraft and one of the most affordable business jets with a starting price of $7 million. Today, you can pick up a used Premier 1 private jet for under $2 million, making the aircraft one of the cheapest private jets.

The aircraft fuselage is constructed from high-strength composites with a weight-saving epoxy honeycomb structure for improved range and fuel efficiency. Power from a pair of rear-mounted Williams International FJ44-2A engines each produced 2,300 lbs (10.23 kN) of thrust. The Premier 1 private jet has one of the best ranges in its class. It can make multi-city trips at a lower operating cost per mile than its direct competitor, the Cessna Citation CJ2+.

The Best Private Jets Under $4 Million

The Stratos 716X single-engine private jet is what happens when an aircraft development turns into a never-ending cycle of financial problems. And after spending a decade developing the proposed 714 VLJ. Its designers increased the prototype’s fuselage length by 31 in (77.5 cm) to accommodate six adults and their luggage, renamed it the 716X, and went hunting for the Cirrus Vision SF50.

The Stratos 716X is poised to become one of the world’s cheapest private jets. However, it will only be available for purchase in pre-build kits pending the aircraft certification by the FAA. This aircraft features some impressive specs, its airframe is built from advanced carbon fiber composites, and it is equipped with a Garmin avionics system for easy, effortless inflight operations.

Annual kit production is estimated at three units which will take around 2,500 hours to assemble completely. Individuals daunted by the prospect of building a jet aircraft by themselves will have the support of Stratos’ factory-aided build assist process throughout the entire assembly period. 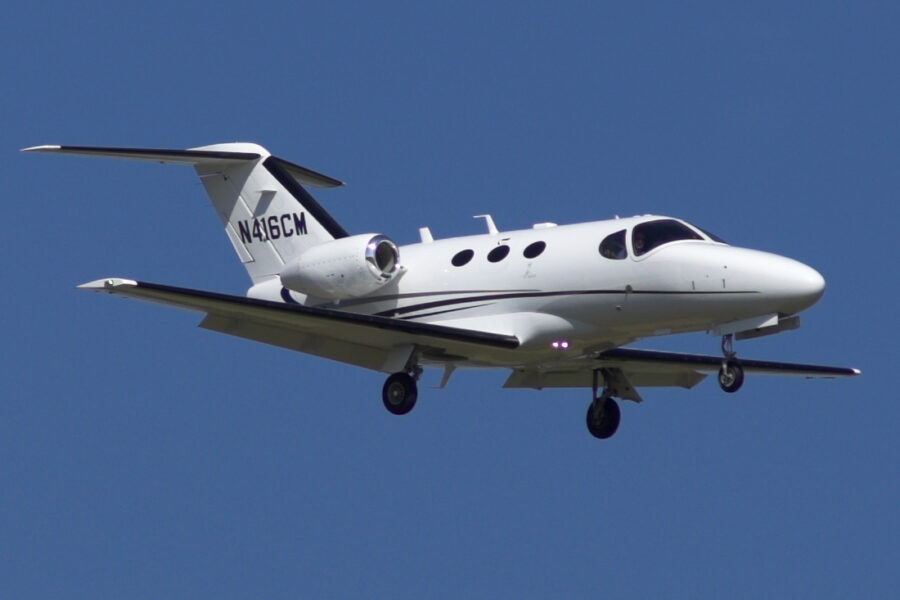 The Cessna Citation Mustang is proof that big things do come in small packages. This versatile twin-engine Very Light Jet possesses impressive performance capabilities, including short-distance landing and take-off even during icy conditions. The Cessna Citation Mustang is one of the most affordable business jets capable of making quick business trips or taking five passengers and their luggage to a luxury holiday destination without compromising comfort, performance, and economy.

The Cessna Citation Mustang gets its power from two Pratt &Whitney Canada PW615F turbofans, each generating 1,460 lbs (6.5 kN) of thrust. Key design features of the Cessna Citation Mustang are a three-spar, low-wing cantilever with a swept-wing design and T-tail assembly. Unlike most VLjs, the aircraft airframe is built from aluminum alloy, providing more structural rigidity.

The spacious interior is wrapped in soft leather stitching and packed with luxury amenities. A dropped aisle and six oval windows provide an open, airy feel throughout the cabin. The base Cessna Mustang has four passenger seats and a semi-enclosed potty seat in the cabin, with two pilot seats in the cockpit area.

Operating costs for 200 flight hours are around $448,000 or roughly $5.81 per mile, making the aircraft one of the cheapest private jets under $5 million. 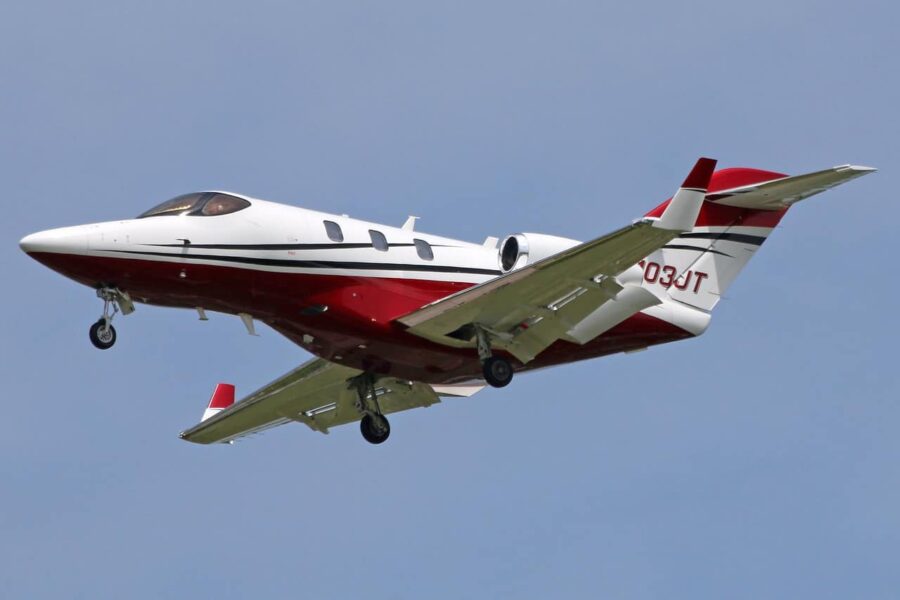 You are probably right If you looked at the HondaJet HA-420 and thought it resembled a shoe. According to aircraft designer Michimasa Fujino, a key design feature of the HondaJet HA-420 was inspired by Salvatore Ferragamo’s shoes resulting in a sleek light business jet that took the world by storm at its launch.

The HondaJet HA-420 is equipped with a touchscreen 3-display Garmin G3000 glass cockpit avionics system. Its luxurious leather-clad cabin seats four passengers with a belted potty. The price of a brand new HondaJet HA-420 was $3.4 million, and today you can pick up a certified pre-owned jet for around $2.5 million, making the HondaJet HA-420 among the cheapest private jets under $5 million. 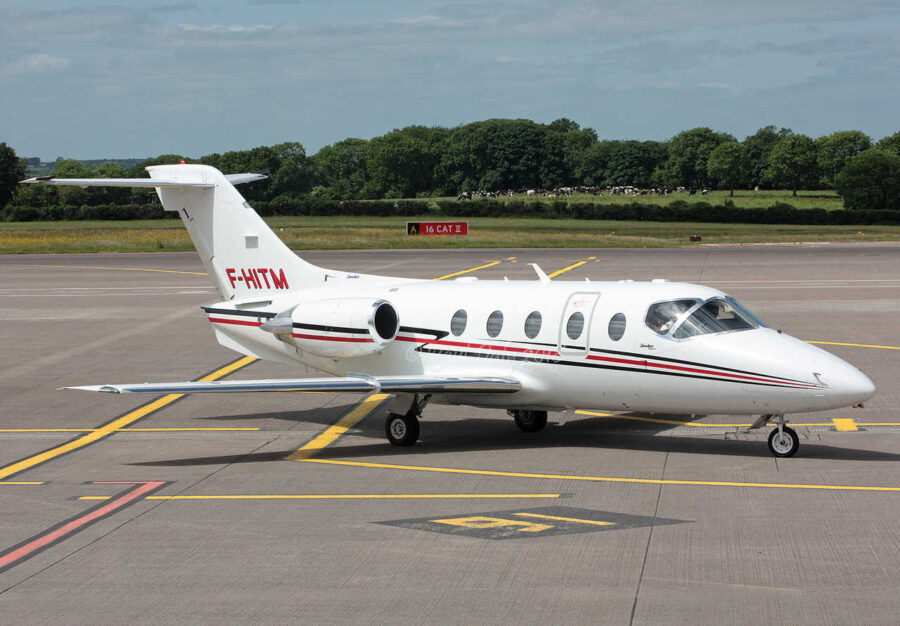 One of the best-selling private jet platforms, the Hawker 400 has survived several iterations, redesigns, and upgrades mainly because it is one of the most affordable private jets. The Hawker 400 was initially manufactured by Mitsubishi and marketed as the Mitsubishi Diamond/Diamond II. After the type rights were sold to Beech Aircraft company, the aircraft saw significant improvements, including an increased range, a higher MTOW, an upgraded cabin, and the addition of an all-glass cockpit.

The Hawker 400 and its variants, including the Beechjet 400/400A, Hawker 400XP, and the military variant T-1 Jayhawk offer relaxed and comfortable high altitude cruising for short business or vacation trips. Its all-metal, low-winged construction provides structural rigidity and a spacious cabin for four or eight passengers configurations.

The Hawker 400 includes a pressurized cabin and sound deadening to minimize engine noise, short take-off, landing performance, and meager operating costs making the aircraft one of the most popular affordable business jets. 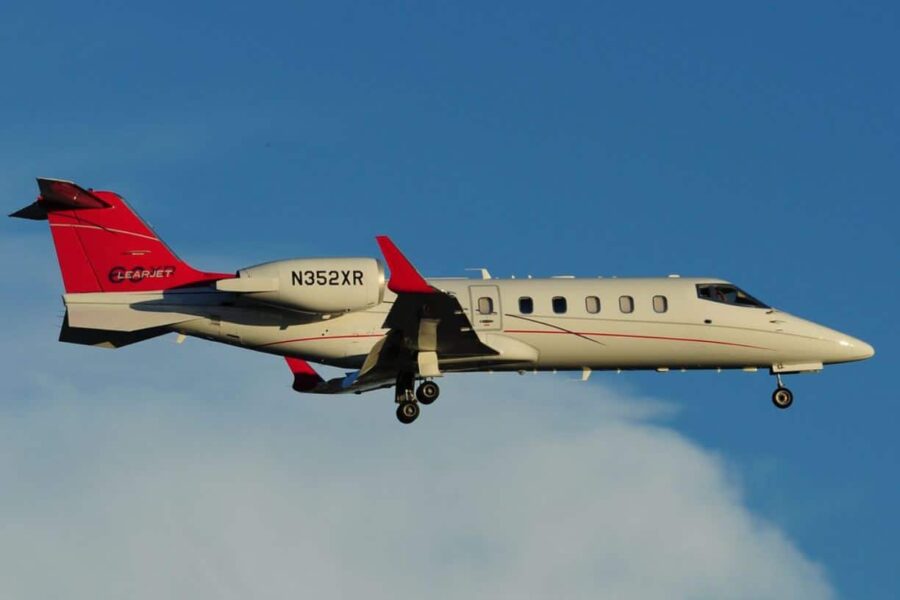 The Learjet 60 is a mid-size business jet powered by twin Pratt & Whitney Canada PW305A turbofan engines producing a maximum of 4,600 lbs (20 kN) thrust each. Built to carry up to eight passengers, the price of a new Learjet 60 private was $13 million during its 20-year production run. However, used prices start from $1.4 million, making the Learjet 60 one of the cheapest private jets under $5 million.

The Best Private Jets Under $5 million 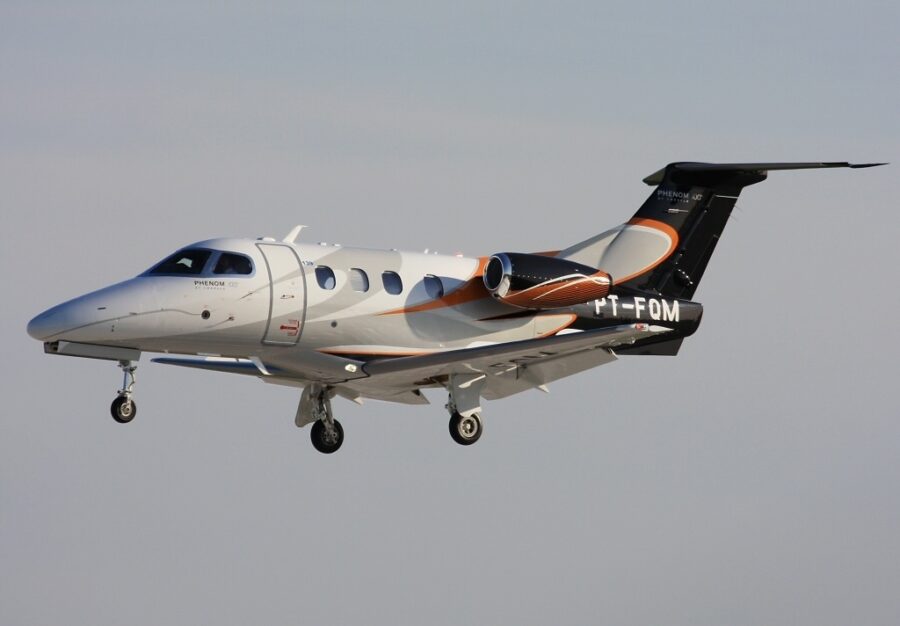 Embraer’s EMB-500 Phenom 100 is one of the cheapest private jets under $5 million in the affordable business jet category in the Very Light Jet category. It is also among the most popular personal private jets, with 380 units sold since its debut in 2008.

The Phenom 100 Pratt & Whitney Canada PW617-F turbofan twin-engines are mounted aft of the fuselage, and each unit produces 1695 Ib (7.2 kN) at takeoff. Both engines are equipped with a dual full authority digital engine control system (FADEC) and an automatic performance reserve (APR) capable of boosting engine output to 1,777 Ib upon engine failure on take-off (EFTO).

Inside the spacious and well-appointed cabin is enough room for five passengers and their luggage. Extra features include a toilet, an optional side-facing seat, and inflight entertainment. 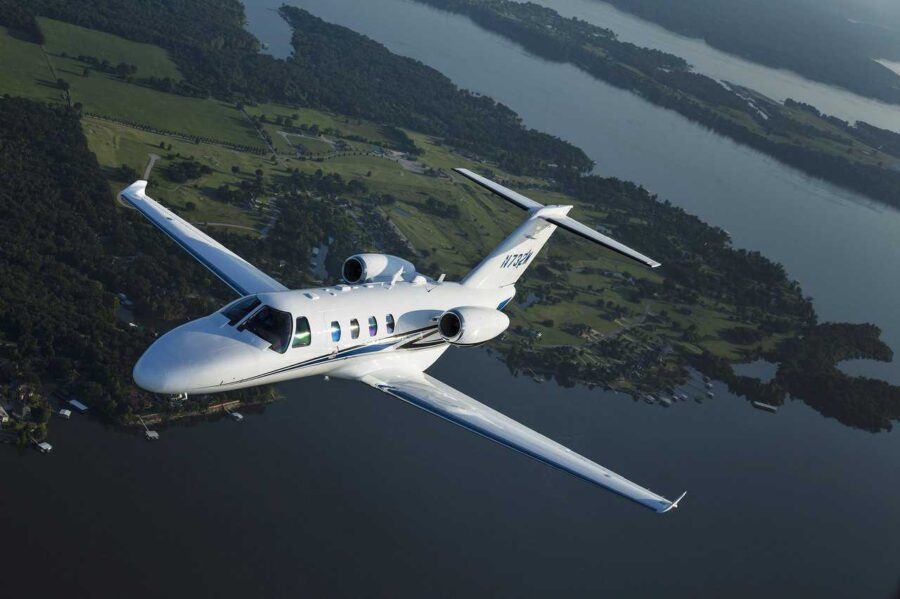 The Cessna Citation M2 is an entry-level private jet that offers pilots and customers control, speed, comfort, and range for charters, private, and cor[porate use. It is among the versatile and affordable private jets under $5 million capable of performance capabilities commonly attributed to large private jets.

The Cessna Citation M2 was developed from the Cessna CitationJet/CJ/CJ/CJ2/CJ3 model range. But significant differences include a pair of more powerful Williams FJ44-1AP-21 turbofan engines with 5% more hot and high thrust and 15% more cruise thrust. The Cessna M2 has a higher climb rate per minute and is 25.5 mph (41 kph) faster than other jets in the CJ model series.

10 of the Most Expensive Private Jets

10 of the Most Expensive Private Jets

Airplanes are an amazing invention, and they are the fastest means of mass transportation. But exactly how fast do airplanes fly? Let's find out!

The 11 Best Bush Planes of All Times

Bush planes are the 21st century equivalent of the covered wagon, steam locomotive, and pony express all rolled into one. Here are the 11 best bush planes of all times!

The 10 Most Popular Ultralight Aircraft

Ultralight aircraft are renowned for delivering the purest flying experiences. Here are 10 of the most popular ultralight of all times!