Get Your FREE eBook
All Posts Military

Fighter jets are designed to operate for specific flight hours before requiring an extensive airframe and powerplant rebuild. And when they reach the end of their operational life, some countries choose to avoid the expense of refurbishing their older fighter jets by selling the aircraft to their poorer allies or sending them to die. A less common option is selling old fighter jets to wealthy civilians. 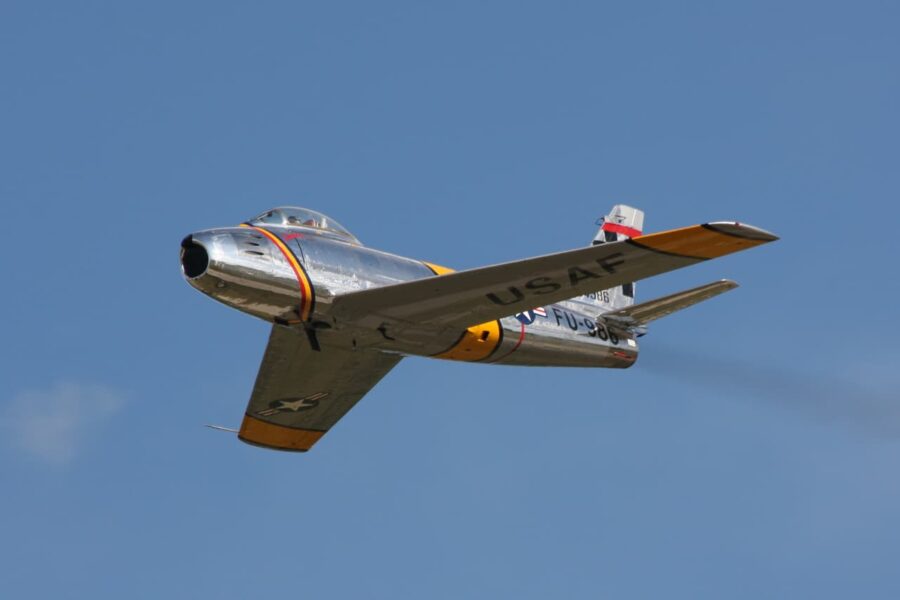 There are tight restrictions on the type of fighter jets sold to civilians. For example, a billionaire tech CEO can not order a brand new F-22 Raptor fully optioned with all its weapons and radar systems. And any private individual trying to get their hands on one of those will be committing some grave federal and international crimes.

Essentially, a fighter jet must be demilitarized before being sold to civilians. This involves stripping the aircraft of its internal/external weapons, classified equipment like advanced engines, and military mission systems like the FLIR/Designators, fire control radars, electronic warfare suites. Demilitarization can also involve removing all flight capabilities if the aircraft is destined for static or museum display.

The demilitarization process varies per country. In the UK, they simply remove the weapons and radar systems along with other classified stuff and leave the rest of the plane pretty much intact for its civilian owner. However, there is the headache of receiving flight certification from the Civil Aviation Authority.

The idea of civilians flying around in old A-10 Thunderbolt Warthogs, F-4 Phantoms, and F-14s does not exactly appeal to the United States government. And as a result, civilian sales of aging fighter jets by the United States military are rarer than a two-horned Unicorn. Retired United States Air Force fighter jets are consigned to the boneyard where workers render them unflyable (demiled) by cutting through the wings and fuselage.

Purchase of a decommissioned United States Air Force fighter jet is possible, but it needs Congressional approval before one can happen. An example is the Collings Foundation purchase and restoration of an F-4 Phantom fighter jet for flight exhibitions.

Civilians can purchase and import foreign combat jet fighters and trainers into the United States if it does not fall within restricted US-manufactured or foreign aircraft. However, the purchase will be subject to the approval of numerous government agencies, who will do their damned best to deny you a license. Then you have to convince the FAA that your fighter jet is safe to fly in American airspace, a process that could take months or years.

Civilian sales of demilitarized fighter jets are more common than we think. There are several online aircraft sales journals like https://www.globalplanesearch.com/warbirds/ https://www.controller.com/listings/for-sale/turbine-military-aircraft/10072, and https://www.trade-a-plane.com/ advertising for ‘sale listings’ of demilitarized fighter jets. However, the purchase price of the fighter jets does not include shipping, certification, and storage costs. Fighter jets’ operating and maintenance costs can run into several thousand dollars per flight hour. 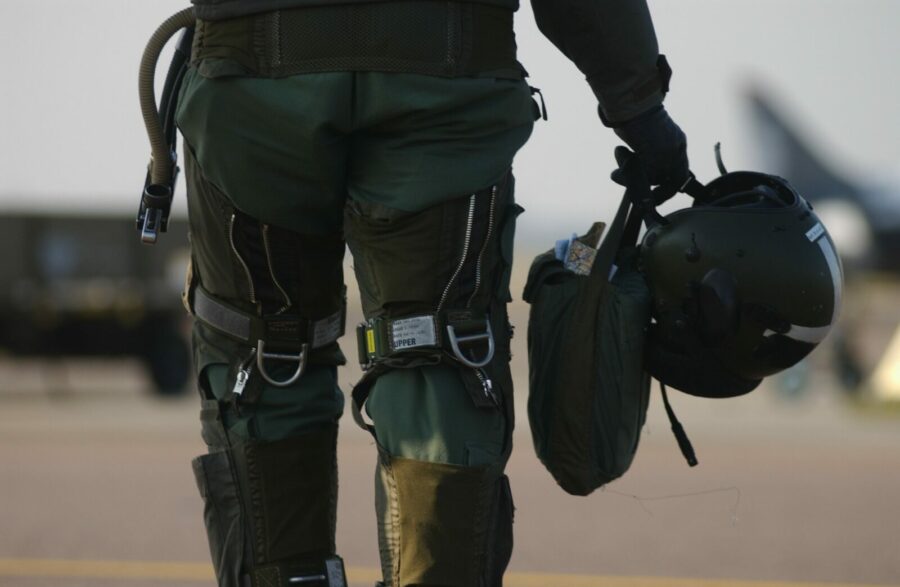 How Much Does a Fighter Jet Cost?

Fighter jets are not cheap. A fully militarized F-35 costs $77 – $125 million, and civilians can not buy one. Modern fighter jets like the Sukhoi Su-Flanker-E fighter jet sells for $85 million, while a brand new Eurofighter Typhoon costs more than $100 million.

All aircraft listed at time of publishing this article in March 2022.

How to go About Buying a Fighter Jet

The FAA briefing for prospective civilian buyers of surplus military aircraft is an important document that gives you some guidance through the entire process. It contains some essential tips that could save you from making mistakes during the purchase.

5 Popular Fighter Jets you can Buy as a Civilian

Sorting through the deluge of demilitarized fighter jets on the online listings market to get the best aircraft that fits your budget and needs is challenging for many individuals. Cheap, Soviet-made MiG-17s,15s, and 21 fighter jets became plentiful after the Cold War, And these relatively simple and durable fighter jets are especially popular among civilians and collectors. Plus, they are easy to maintain with readily available parts to keep them in the air.

The F-86 Sabre is a nimble and highly accomplished combat fighter jet that ushered in the era of swept-wing, high-speed fighter aircraft. This single-seat fighter jet made its combat debut in the Korean war, and its high-speed dogfights against Soviet MiG-15 remain legendary.

F-86 Sabres are among the least complicated American fighter jets. They are easy to maintain, rewarding to fly, and they still captivate crowds at local air shows. You can pick up a decent and flyable F-86 Sabre for $275,000. 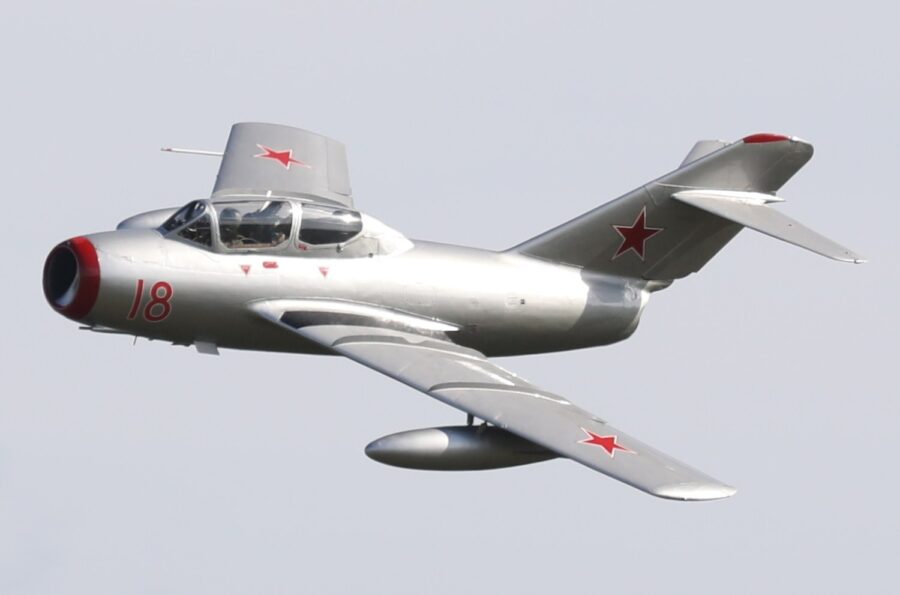 The MiG-17 fighter jet is a highly revered military aircraft with an almost cult-like following among civilian enthusiasts. During the Vietnam war, stories of its famous dogfights with its legendary arch-rival, the F-4 Phantom II, have been made in several television documentaries and movies.

The MiG-17 small size, simple design and construction, and ruggedness make it highly popular among civilian fighter jet buyers. Its flight characteristics are also incredible for a jet of its size. The MiG-17 tight turn radius is excellent for aerial displays at flight shows. Prices of MiG-17 fighter jets can go for about $500,000.

Learn more about the MiG 17 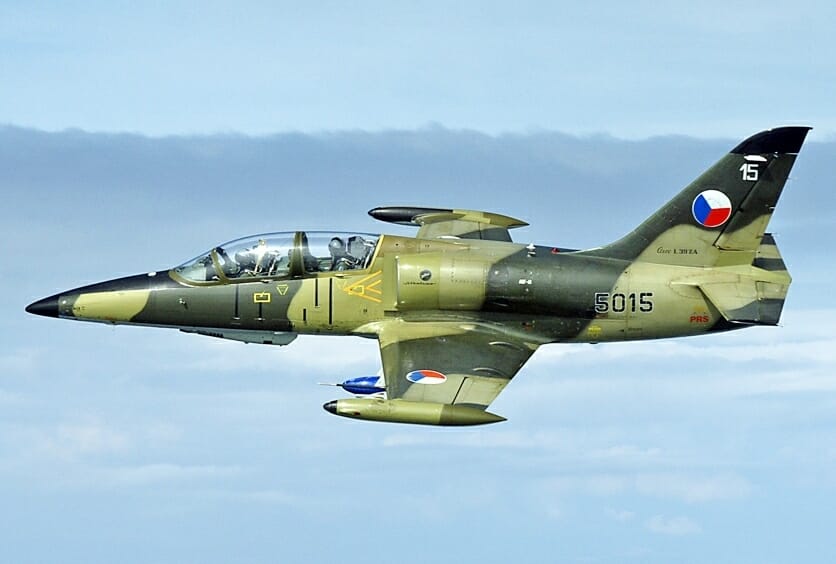 Although the L-39 Albatross doubles as a combat fighter jet and trainer. It is one of the most reliable fighter jets on this list which is why it is a popular choice among civilians. Online asking prices for a well-maintained L-39 are around $300,000. However, dodgy examples can be bought for much less, but it will cost you twice as much to completely restore. Aero Vodochody built thousands of these fighter jet units, so parts should not be a problem for its civilian owners.

Learn more about the L-39 Albatross 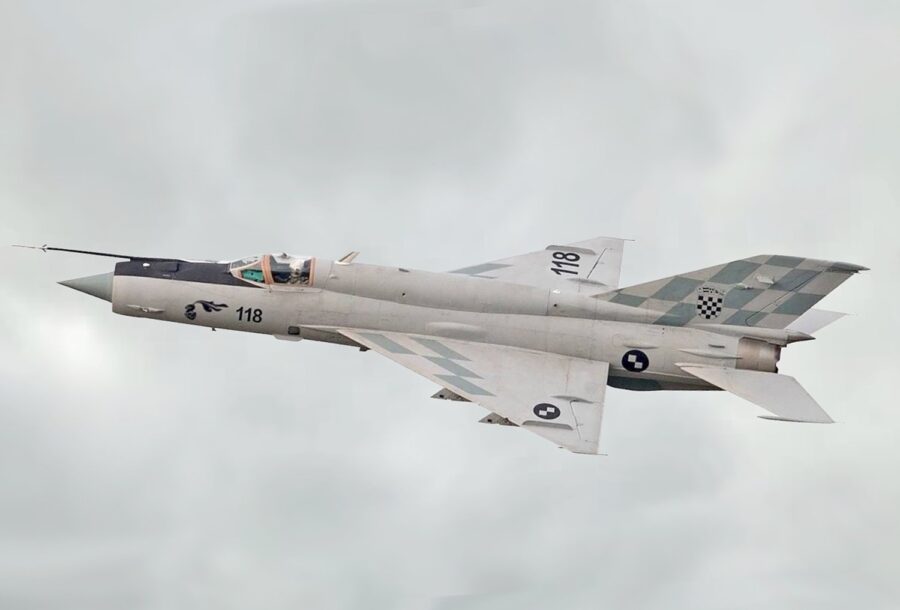 Despite its age, the MiG-21 is the only fighter jet on this list in active service. This is a testament to its ruggedness and simple design. Eastern Bloc MiG-21s could be scooped up for a mere $30,000 after the Cold War. Today, a flyable MiG-21 in decent condition can fetch almost $200,000.

Learn more about the MiG 21 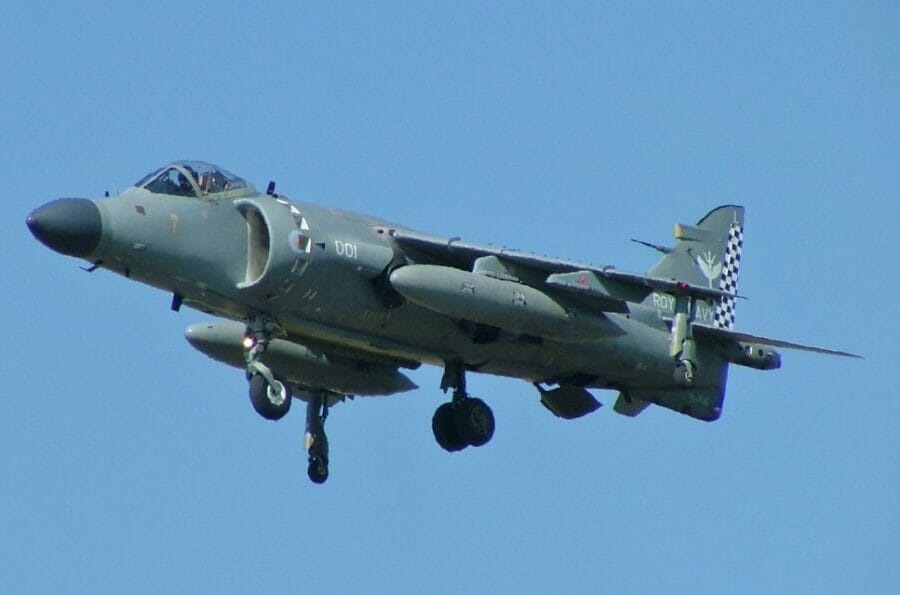 The Harrier FA-2 “jump jet” is the first and the most recognizable VTOL (Vertical Take-Off and Landing) fighter jet to go into serial production. Although the aircraft, with its complicated engine design featuring rotating jet nozzles, requires piles of cash to maintain. Its flying characteristics are second to none. Prices of completely restored single and twin-seat Harrier FA-2 jets in flyable condition are between a million to three million dollars.

The Risks Associated With Owning a Fighter Jet

Despite the thrills of flying around in your fighter jet, many risks are associated with owning one. For starters, buying a militarized fighter jet can legitimately bankrupt you. Health and safety risks are other issues due to the age and airframe condition of the fighter jet.

Here are a few risks that civilians owning a fighter jet can face.

Demilitarized fighter jets may not cost a lot of money, but the certifications, maintenance, and other associated costs could turn your beloved warbird into an endless money pit. The financial risks include

2. Age of the Aircraft

Civilians who buy fighter jets have a higher risk of experiencing an emergency landing or a crash. The average age of a demilitarized fighter jet is 40 years, which is an eternity for fighter aircraft. By the time fighter jets are decommissioned, the engines and airframe have undergone thousands of high-stress flight hours, leading to significant deterioration. Adding more flight hours increases the chances of an in-flight engine failure or catastrophic airframe damage.

Fighter jet parts may not always be available because manufacturers have quit producing them. Several civilians have found out the hard way when they could not get the necessary components to restore their warbirds, causing them to abandon the project. There is also a safety angle. Faulty ejection seat parts in 50s era fighter jets are no longer available, leading to pilots flying without an ejection seat-itself a safety hazard.

There are real and potential health risks for civilians flying fighter jets. These range from exposure to ultraviolet rays while flying at high altitudes, possible exposure to leaking toxic chemical explosives used in the pilot ejection mechanism, and the effects of high G-Forces on the body. Paints used on older fighter jets contain more toxins to reduce the aircraft’s radar signature. These toxins can contact the skin of their new civilian owners, causing health issues. 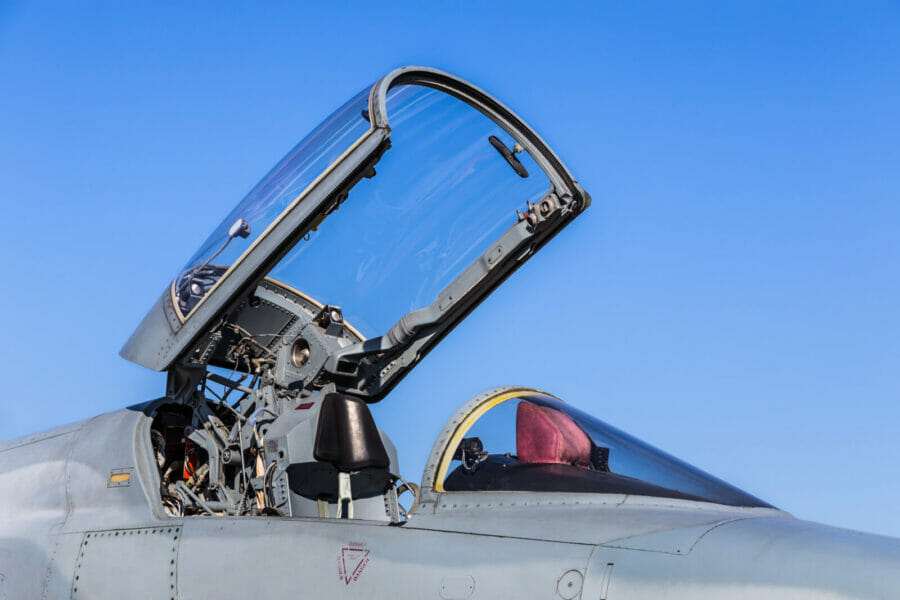 Which License do You Need to Fly a Fighter Jet?

The Federal Aviation Administration FAA requirements for civilians who want to fly a fighter jet in the United States include possessing a standard private pilot license with an appropriate category and rating for the aircraft’s configuration. This means civilians can not take their newly delivered fighter jet on a joy ride without being certified to fly that specific aircraft – even if they are experienced pilots.

The big problem with licensing civilian fighter jet pilots is demilitarized fighter jets do not have a Type Certificate like other private or commercial airplanes. And obtaining one involves tons of legal work and piles of cash. A Special Airworthiness Certificate under the Experimental Aircraft Exhibition category is typically issued at the end of the process. This is when you can start the training and certification process that gives you the license to fly your fighter jet.

Civilians require at least 500 flight-instruction hours in an FAA-certified fighter jet before being rated to fly one. Some companies provide flight training in demilitarized fighter jets or trainer aircraft for this purpose.

Ex-military pilots do not require an FAA license or additional training to fly a demilitarized fighter jet.

In a nutshell, ownership of a demilitarized fighter jet is expensive can be very expensive. And it would help if you were extremely wealthy and a tad eccentric because buying one offers few practical benefits for the piles of cash it requires. For those crazy and rich enough to want one, prepare to spend large amounts on hiring an army of lawyers to sort the numerous government purchase approval and import licensing process. Then the shipping costs to your location, storage, fuelling costs, and the costs of keeping the airframe and engine airworthy.