We can all agree aircraft can offer some incredible fun, but there’s one type of airplane that’s especially enjoyable to fly for many: ultralights.

Ultralight aircraft are renowned for delivering the purest flying experiences, which is the primary reason for their continued popularity. The appeal of taking to the skies strapped to a wing and a skeletal metal frame powered by a tiny 18 horsepower, 100 Ibs (45 kg) engine evokes the nostalgia of early years powered flight when aviator/inventors built and flew their airplanes. 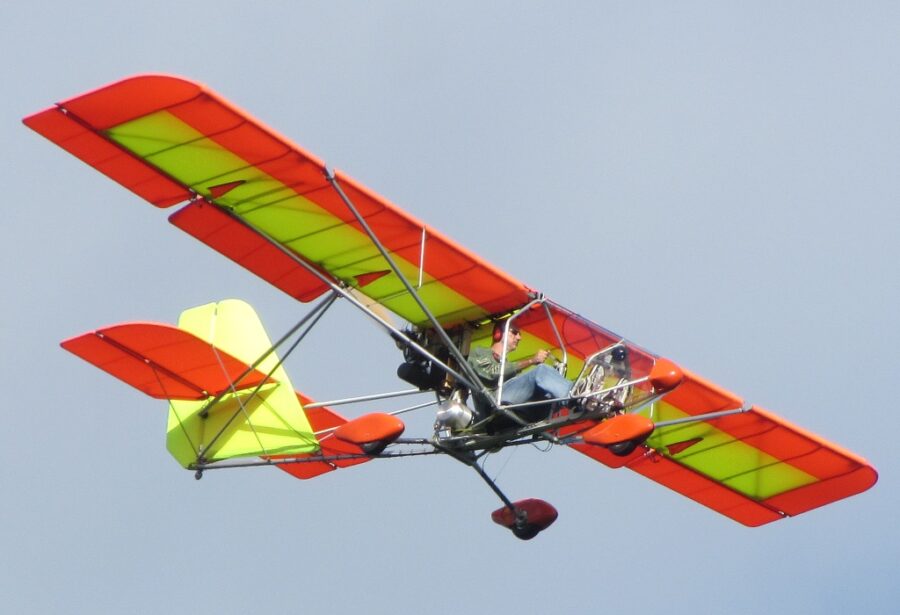 Ultralights are an affordable and fun way for aviation enthusiasts – amateur flyers and professional pilots, to experience the joys of no-frills open-air flights. There are different models and brands of ultralight aircraft to choose from, depending on your wallet size and experience level. Acquiring your first ultralight aircraft can be a daunting process, and later in this article, we will take a closer look at each of the most popular ultralight aircraft models.

Assembling an ultralight aircraft from a kit is the cheapest way of getting your ultralight adventure started. You could also purchase the more expensive and larger factory-assembled models if you prefer someone else to do the heavy lifting. Either way, both options are guaranteed to deliver an incredible flying experience.

What is an ultralight aircraft?

An ultralight aircraft or vehicle (official American term) is a lightweight fixed-wing recreation aircraft designed for short-distance flights and seats one or two passengers, including the pilot. Different countries define ultralights in separate ways. For example, the European Union represents an ultralight as any lightweight aircraft with a maximum take-off weight of 450 kg (992.08 pounds). 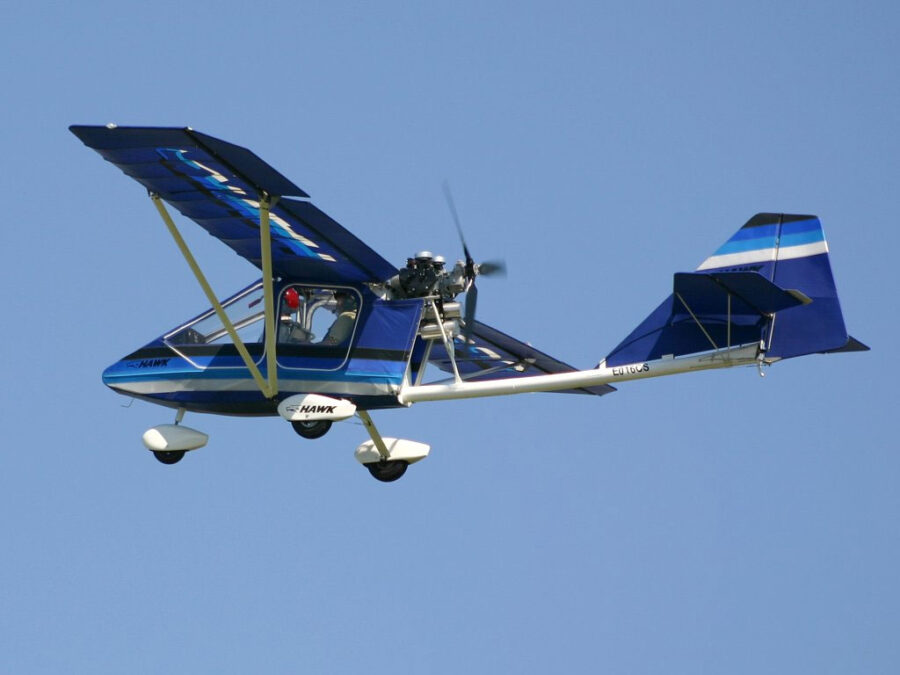 Civil Aviation folks in the United States have a broader definition of what may constitute an ultralight aircraft. According to the Federal Aviation Authority FAA Part 103 Federal Aviation Regulations, an ultralight vehicle is a non-certified single-seat recreational or sport aircraft with an empty weight not exceeding 70.3 kg (155 pounds) if unpowered, and 115 kilograms (254 pounds) when fitted with an engine.

There are different ultralights available, and they are not just limited to fixed-wing aircraft. Examples of popular ultralight aircraft types include powered parachutes and trikes. However, helicopters and gyrocopters are also quite common, and your pick of ultralight aircraft depends wholly on your flying preferences.

These are parafoil wings fitted with gasoline or electric-powered motors to provide thrust. They are the most affordable ultralights available. 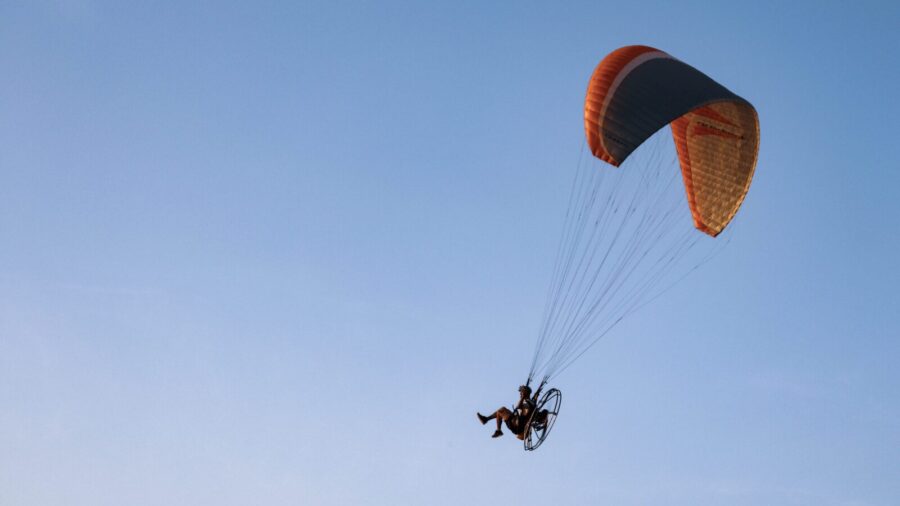 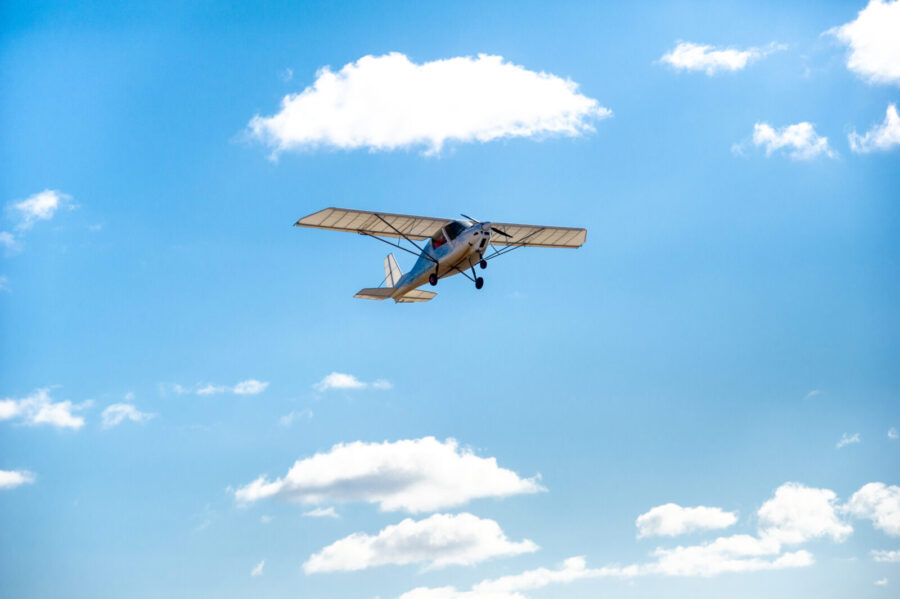 These consist of gliders and sailplanes and are flown by pilots who love the tranquility of a noiseless flight.

They are among the most popular ultralights available in single or two-seat versions. Trikes are powered hang gliders consisting of an open cockpit suspended beneath a hang glider acting as its wings. Trikes’ only means of control is by weight shifting. 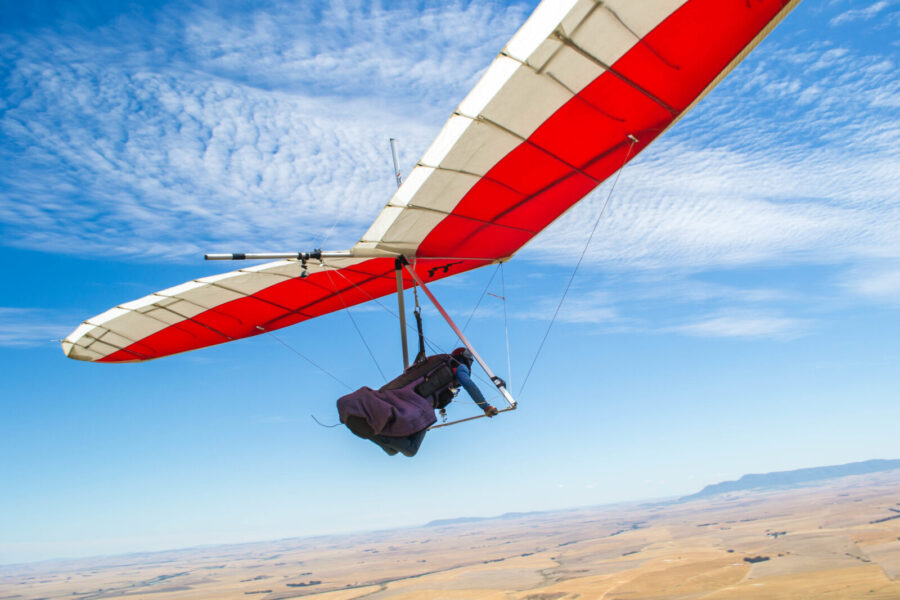 These types consist of helicopters and gyroplanes. Gyroplanes are ultralights that resemble helicopters but fly like airplanes.

These ultralight types include hot air balloons and powered airships.

Do you need a license to fly an UltraLight plane?

The common assumption that you do not need a license to fly an ultralight aircraft is not entirely correct. Apart from the aircraft weight requirements and limits, European Union aviation regulations require a light aircraft pilot license LAPL before you can pilot an ultralight aircraft. This license limits you to sailplanes, rotorcraft, balloons, and single-engine piston planes with four seats and not exceeding a take-off weight of 2,000 kg (4,409 pounds). Pilots issued a LAPL license can only fly in weather conditions with excellent visibility (Visual Flight Rules VFR) and must obtain permission before taking off in their ultralight aircraft. 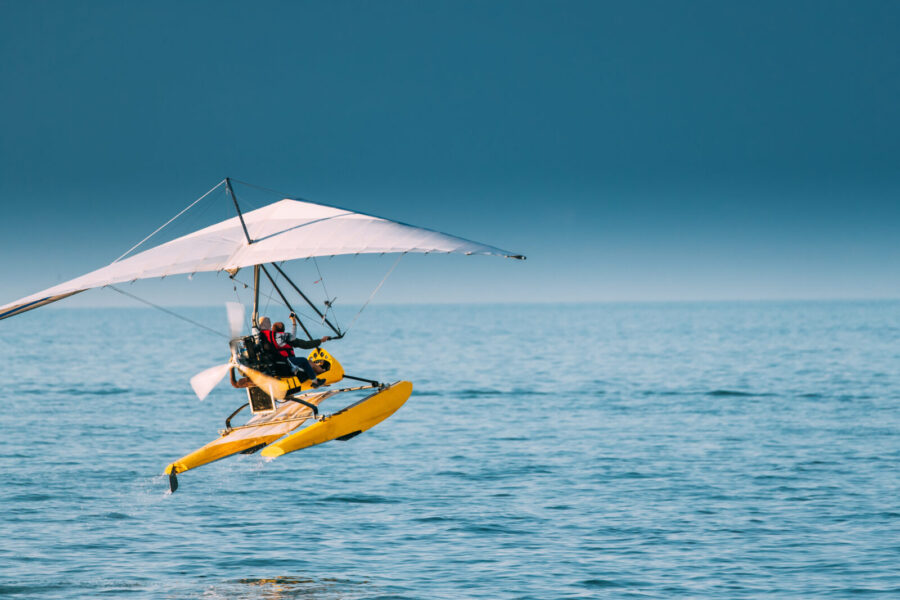 In the United States, ultralight aircraft operating under the (FAR Part 103) regulations are used for sport or recreational flights and not classified as conventional aircraft. The FAA does not issue airworthiness certificates for that ultralight category, and you do not need a license to fly them.

However, two-place (two-seater) ultralights or ultralight aircraft with an empty weight exceeding 115 kg (254 pounds) operate under the GA Rules (Part 61 & 91), which mandates pilots to have at least a sport pilot certificate before operating this category of ultralight aircraft. Pilots flying with a passenger must have obtained a recreational pilot license.

The 10 most popular ultralight aircraft of all times

Now let’s dive into the main part of this article and look at the list of most popular ultralight aircraft we could find! 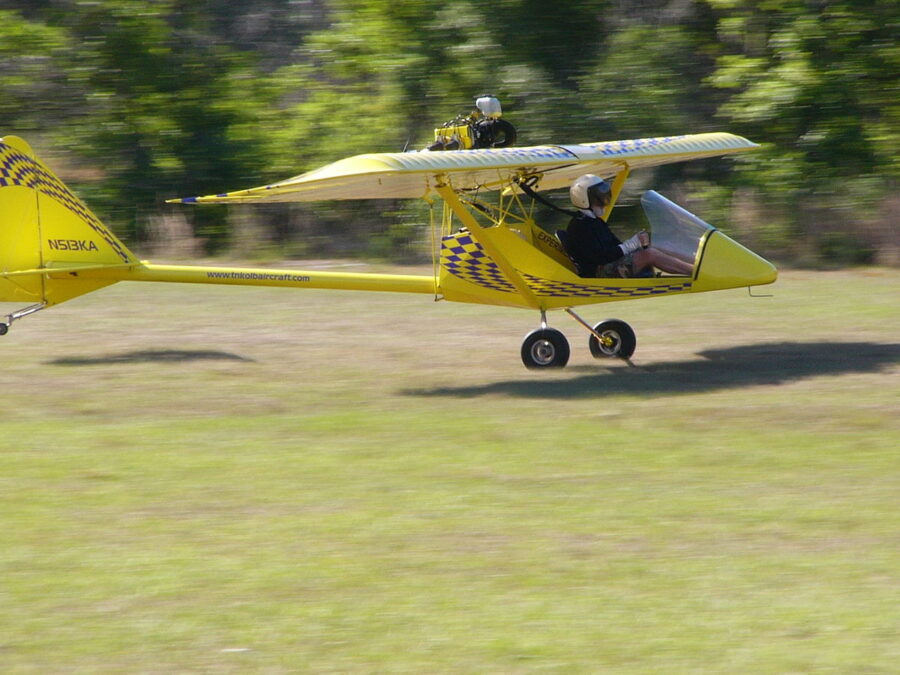 The Kolb Firestar I is a classic example of how to develop the ultimate ultralight flight experience. This popular taildragger uses an open cockpit and generous high wing design mated with traditional landing gear to create one of the most versatile and delightful single-seat ultralight aircraft.

The Kolb Firestar I complies with The American FAR (Part 103) regulations with its single-seat configuration and maximum empty weight of 115 kg. It is available brand new in kit form, and owners can assemble the aircraft in 350-400 hours.

The CGS Hawk Arrow range of ultralight aircraft proves that effective customer feedback can result in awesome products. The Hawk Arrow II is a variant of the widely successful Hawk Classic. Still, it incorporates a two-seater tandem style arrangement for a better center of gravity distribution during solo flights.

It is available as a standard Experimental Amateur-Built Kit and factory-built SLSA and ELSA versions. And every single Hawk Arrow II features a sloping windshield inside a streamlined cockpit for excellent visibility and aerodynamics performance during flight. Other unique features that make the Hawk Arrow highly popular among ultralight enthusiasts include: 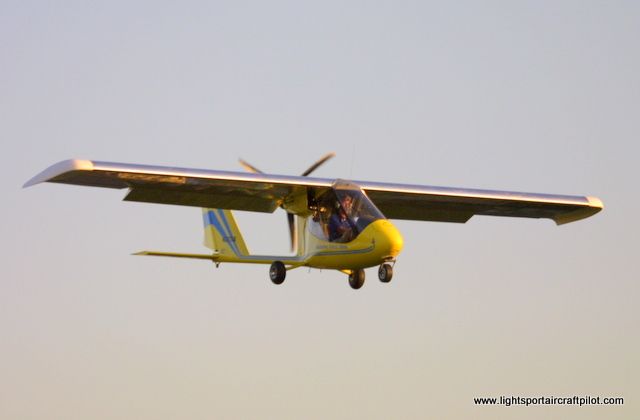 The Earthstar Thunder Gull 2000 is a lightweight ultralight aircraft like no other. It is available with an impressive range of powerful yet refined engines providing pilots with a vibration-free flight. It has incredibly responsive handling, a fantastic climb rate, and outstanding fuel economy, all packaged in a spacious and sleek fiberglass single-seat enclosed cockpit.

This highly popular ultralight aircraft includes pilot seat belts, a full cabin windscreen, a jig welded roll cage, and a hitch that connects to a trailer for easy towing. The Thunder Gull 2000 is available in kit assembly and ready-to-fly versions. 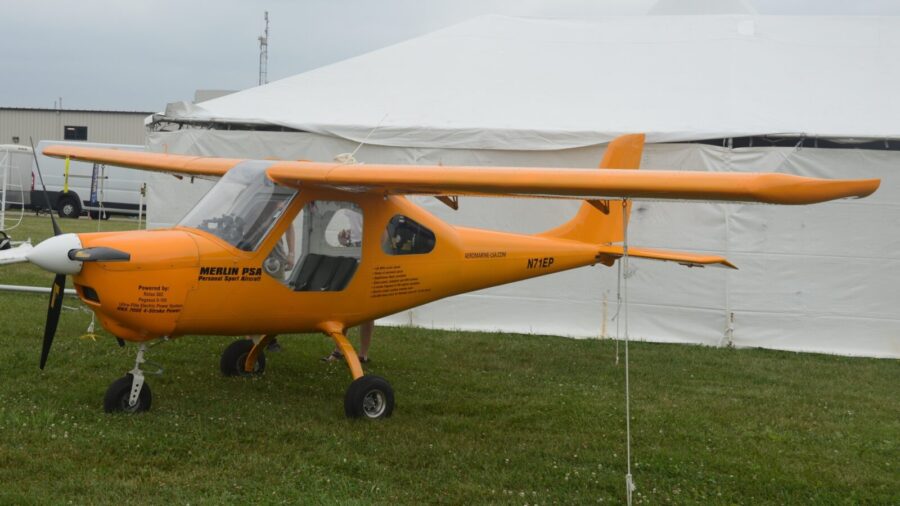 For starters, the aircraft features all-aluminum construction that offers better endurance, stability, and weather protection. Its state-of-art 250 DS engine is backed by thousands of hours of reliable service over several decades, providing pilots with stress-free operations. Other unique features that make the Aeromarine Merlin Lite an unforgettable flying experience include: 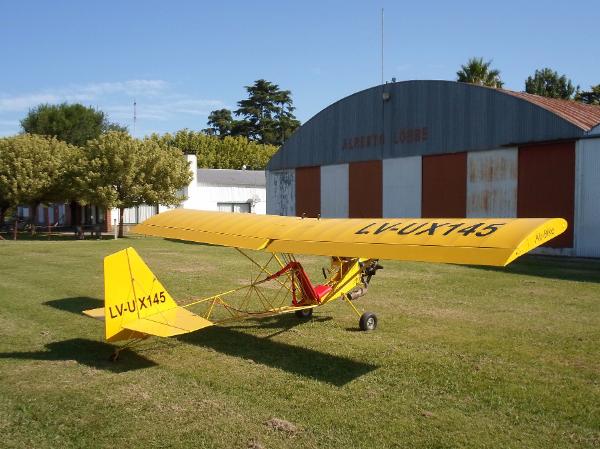 The minimalist tubular steel frame structure of the Jordan Lake Air Bike LS ensures light and agile aircraft making the ultralight a flying delight. Pilots sit in a narrow cockpit with both legs operating a pair of rudder pedals outside the ultralight, giving the distinct impression of riding a bike.

This aircraft is available in partially assembled kit form and provides actual value for your bucks. And it is an excellent aircraft for both new and skilled pilots. 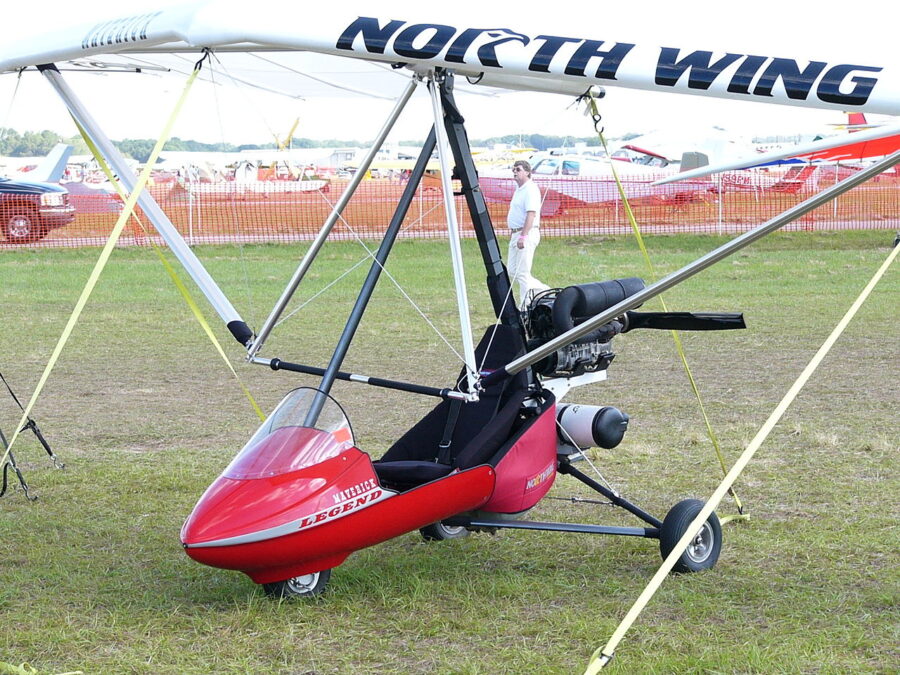 The NorthWing Maverick 2 RT is an excellent example of what happens when you combine a hang gliding wing, an open cockpit fuselage, and a zesty 40 horsepower engine with a tricycle landing gear. The result is lightweight, affordable, and, we dare say, one of the most thrilling ultralight flying experiences ever.

You may be tempted to dismiss the Maverick 2 RT as your average FAR 103 ultralight based on its looks, do not fall for it. North Wing engineers have poured hours of relentless development into the ultralight aircraft resulting in loads of distinctive and beneficial design features. Such as an extended fuselage to expand baggage space, strutted airframe components to increase the wing load rating, foldback wings for more accessible storage and transport, and so much more.

This popular ultralight aircraft is available in 2 versions; the Maverick 2 RT(no fairing) and Maverick 2 Legend(streamlined fairing).

The Aerolite 103 is a handsome high-winged ultralight fitted with external struts welded to a tubular frame and an enclosed cockpit. Since the Aerolite 103 is sold in ready-to-fly units, customers have a range of customization options, including digital instruments, a wide range of color selections, and tundra tires.

Standard options on both pre-assembled and kit units include: 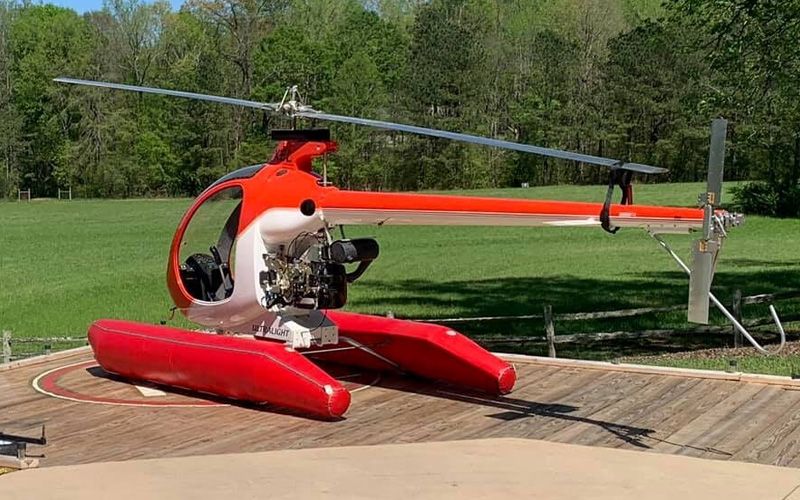 The XEL is the only ultralight helicopter to make this list. This small aircraft has a fiberglass frame design to save weight, which also helps its performance and handling characteristics. Unlike other ultralights, it offers a distinctive flying experience, and it is fitted with floats for water landings. 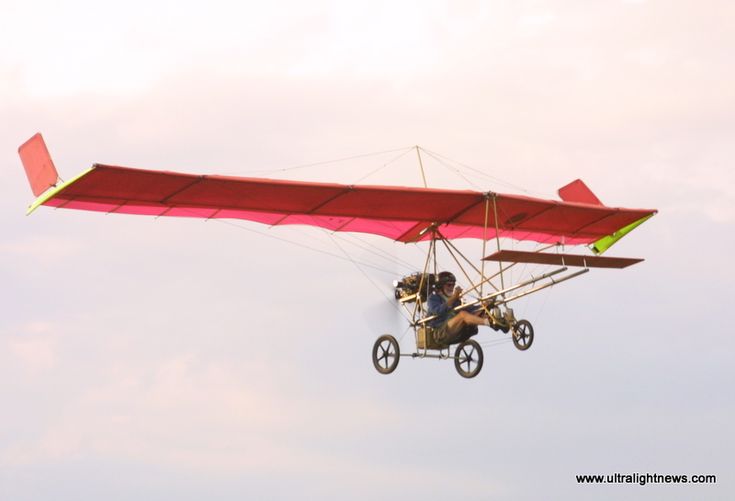 Arguably one of the most significant ultralight aircraft designs of its era, the Pterodactyl Ascender is based on the Manta Fledge performance hang gliders popular during the 1970s. Introduced during the Oshkosh Air Show in 1979, the Ascender featured revolutionary flight controls unseen in a rigid wing ultralight, including weight-shift pitch control and tip-rudders for yaw and roll control.

The Pterodactyl Ascender was produced briefly during the 1980s with a total production of 1,400 units. DFE Ultralights are currently building it as the DFE Ascender III series. 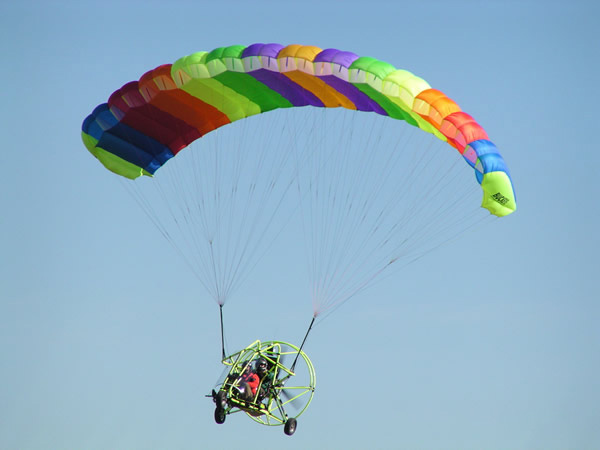 Powered parachutes provide the purest ultralight flight experience, and the Buckeye Dragonfly Powered Parachute does not disappoint. This kit assembly aircraft is available in three and four-wheel models with a 360 sq ft. chute as standard.

Handling and performance are very refined with responsive controls, which are through a single center column controlling throttle, ground and in-flight steering. The Dragonfly Powered parachute combines lighter-than-air with a light aircraft chassis to provide new and veteran pilots with a fun and safe aerial adventure.

Interest in ultralight aircraft has expanded significantly during the last few decades, with thousands of flying clubs, online forums, and resources available in several countries. Newbie pilots and potential buyers of ultralight aircraft owners can join these clubs and obtain helpful information on the best type of ultralights to buy, weight restrictions for their area, and flight instructions.