I bet you never thought about going to the bathroom on an airplane until you needed to use one, right? You are not alone. Several questions cross the minds of passengers who fly commercial planes each year on how airplane toilets work once they step inside.

Airplane toilets work differently from other toilets. And the technology behind how those devices operate is simple once you understand it. Our article on how commercial airplane toilets work has the answers to your questions and explains everything you want or need to know on the (disgusting) subject of commercial airplane laboratories. And what to expect should you find yourself using one on your next flight.

How do airplane toilets work?

Regular toilets work using a siphon that drains the toilet bowl after flushing and gravity, pulling the water (and poop) in the toilet bowl into a septic tank or sewer system. The problem with using conventional toilets on airplanes is that water in the toilet bowl tends to spill wherever an airplane encounters turbulence, risking a potentially dangerous short circuit if the water seeping through the deck finds its way into the mass of electrical wiring below deck.

An excellent solution was discovered in 1975 by James Kemper, who figured out the perfect airplane toilet system. The system uses an active vacuum system in place of a passive siphon to remove waste and clean the toilet bowl. It works by using powerful vacuum suction to suck out all the solid and liquid waste in the water in the bowl, cleaning and disinfecting the toilet in the process with an agent called Skykem (more on Skykem in the next heading).

Boeing started installing vacuum toilets on its planes in 1982 with the 727, and the system has caught on to become a standard feature of modern aviation aircraft.

Do airplane toilets use water?

Airplane toilets primarily use a vacuum system with a cleaning agent known as Skykem to remove waste and disinfect the toilet bowl instead of water. It is why they make a loud noise when you flush, unlike the sound made by conventional household toilets. Water helps clean solid waste and helps to get rid of odors, but it is problematic when used on airplanes, as explained earlier in the article.

Enter Skykem, an invention by the vacuum toilet creator Jack Kemp. Skykem is a blue collared cleaning agent formulated exclusively for permanent disinfection and odor elimination in passenger airline toilets. When you flush the toilet in an airplane, the Skykem in the vacuum system goes to work disinfecting the bowl by combining many active compounds, including scale inhibitors and de-deodorizers, with minimal amounts of water to ensure a hygienic and odorless aircraft toilet for the next passenger.

Where does the waste go after flushing an airplane toilet?

How airplane toilets work to store solid and liquid waste is relatively simple, unlike regular toilets that use water and gravity to siphon solid waste inside a toilet into a septic tank or the city’s sewer system. Airplane toilets use a different strategy because of the lack of space for a septic tank to hold human waste aboard an aircraft.

After flushing, the vacuum in the airplane sewer line sucks the waste out of the toilet bowl along with Skykem through the airplane sewer pipes into a holding tank at the rear of the airplane. The vacuuming occurs at speeds of 150 meters per second, or 300 miles per hour – equivalent to Formula 1 race car speeds. 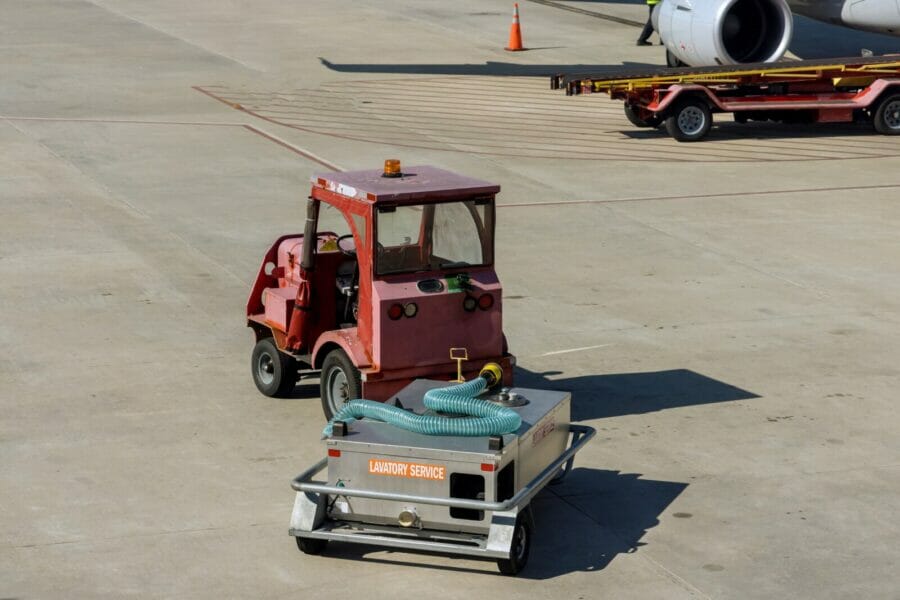 An airplane lavatory service car at a commercial airport.

Advantages of vacuum toilets on airplanes

The idea behind the design of vacuum toilets is to create a more straightforward and lighter system replacing conventional toilets on airplanes resulting in space savings and fuel reduction costs which is the nucleus of every aircraft design.

Below are some of the advantages of Vacuum toilets on airplanes:

The earliest recorded airplane to have a toilet fitted was the Caproni Ca.60 Transaereo, a nine-wing flying boat designed for transatlantic flights. Unfortunately, the plane crashed during its second test flight, and we had no idea how well its toilet worked. Other airliners that followed had working toilets that opened into the atmosphere, including the Supermarine Stranraer flying boat, which earned it the “Whistling Shithouse” moniker.

Allied World War 2 bombers had bucket toilets named “chemical toilets” that aircrews hated because they often overflowed. Airline commercial passengers used crude toilets that did not flush and could only be emptied whenever the airplane landed. The toilets used on modern airliners were invented in 1975 and made its airplane debut in a Boeing airliner in 1982.

Modern airplane toilets work using a vacuum system which has proven to be effective in disposing of solid human waste and keeping airplane toilets operational. Some of the most luxurious and well-equipped airplane lavatories can be found onboard private jets. 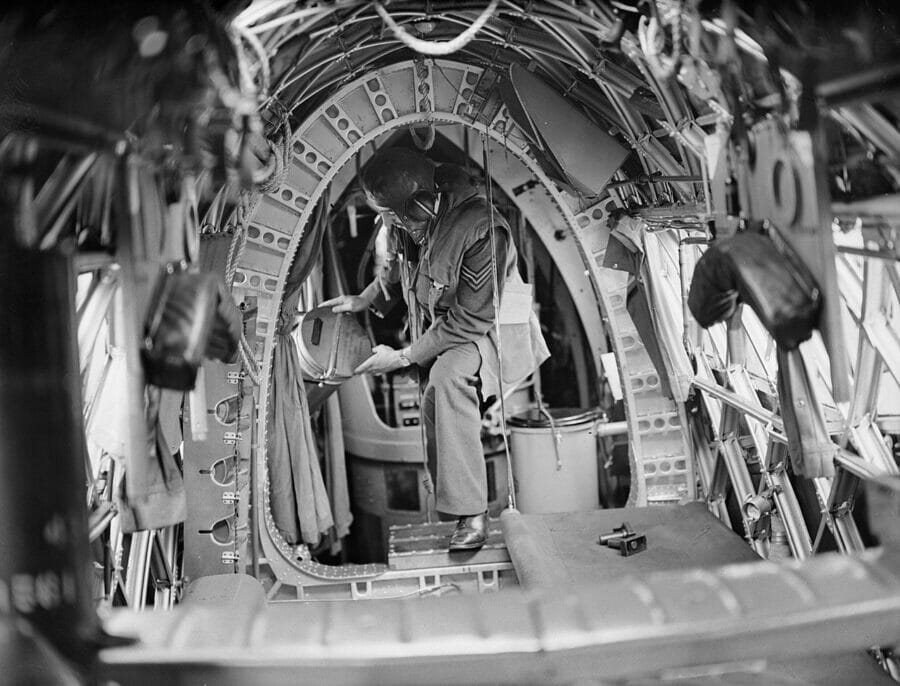 A crewman on board a World War 2 Royal Air Force Vickers Wellington bomber. The container to the right of him is the aircraft’s “Elsan” chemical toilet (1939-1941)

Can flushing an airplane toilet suck out your insides?

Incidents of airplane toilets sucking out people’s insides while sitting are urban legends. You are more likely to die from exposure on Mount Everest than getting disemboweled on an airplane toilet seat. Early airplane toilets with warnings against flushing while sitting on the bowl may have contributed to the horror stories about people’s bowels getting sucked out. Besides, it will involve your butt creating an airtight vacuum inside the toilet bowl, which is impossible because the toilet seat is designed to prevent a vacuum effect.

Nonetheless, there have been occasional incidents of women being stuck to airplane toilets after flushing when seated. All the passengers did not get disemboweled and were eventually freed by the cabin crew.

Does frozen poop fall from the sky?

Although they are rare, there have been several verified claims of frozen airplane poop, commonly called blue ice falling on homes and lawns. Blue ice is a mix of solidified Skykem and human excrement, and it gets the blue color from the Skykem compound.

Over the years, claims of pilots releasing waste mid-air resulting in clumps of blue ice falling to earth, have been debunked. So, why does the problem persist?

A popular theory explaining the existence of blue ice is that Skykem and human waste leaking out of airplane sewer tanks at high altitude manages to find its way to the airplane undercarriage, where it freezes at high altitude. However, when the plane descends to lower altitudes with warmer temperatures for landing. The frozen clumps of blue ice attached to the fuselage warm up, and sections of the stuff dislodge from the surface, falling on people’s homes below. This explains why blue ice is often found along flight paths of landing airplanes.

Should blue ice be something to worry about? The average individual should not fear getting killed by a blue ice impact because it rarely happens except maybe on HBO dramas. However, blue ice has caused significant damage to homes and other structures. 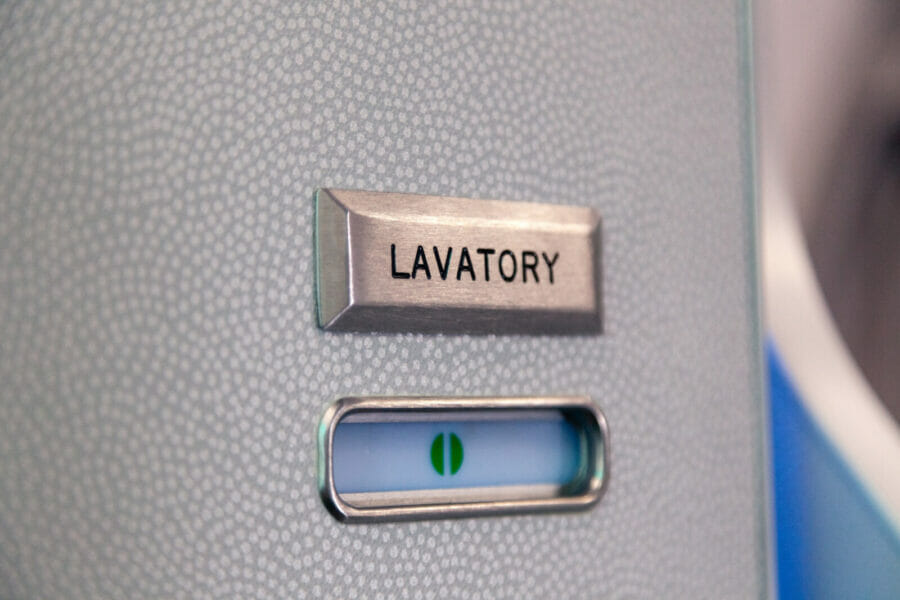 Why does an airplane toilet flush so loudly?

The sound of an airplane toilet flushing can be pretty intense, and it can hit over 100 decibels, so much so that the Wall Street Journal called it the loudest portion of anyone’s flying experience.

The reason why you can hear the deafening flushing sound halfway across the cabin is due to the way an airplane toilet works. Airplane toilets use a vacuum system to move the waste from the toilet bowl in every section of the airliner at breakneck speeds into the sewage tanks at the rear. And the booming sound you hear after flushing is the waste sucked through the sewage pipes that feed the main tank at high pressure.

Also, the sound resonance through the confined space of a closed toilet cabin can amplify the sound to a greater extent. 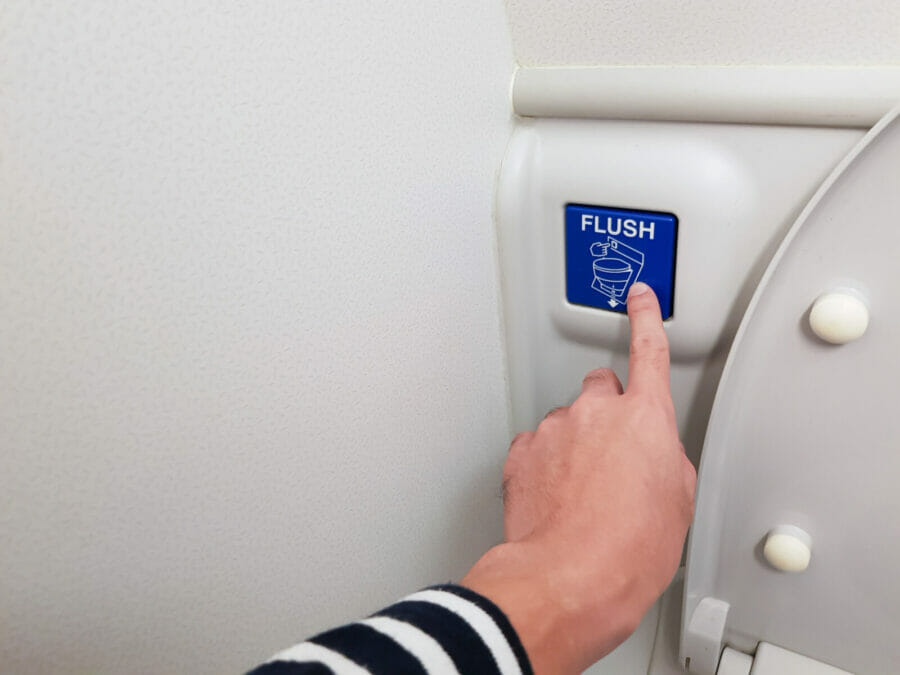 After 30 years of vacuum toilets, a more efficient invention will inevitably come along. Airplane toilets of the future will look nothing like today’s devices, just like they were different fifty to sixty years ago. Boeing is developing a larger, self-cleaning, and hands-free airplane toilet that does away with liquid disinfectants for ultraviolet light. The company claims the new method works faster and eliminates 99.99% of harmful bacteria present inside the toilets. The lights zap the entire toilet, including the seat, countertop, and faucet, sanitizing the enclosure within three seconds and removing all odors.

In the meantime, while we wait for the magic porta-potty, remember to hang a bag of coffee grounds on the toilet door to absorb any odor from your last lunch.

The difference between airport gate and stand varies depending on the airport or country you are in. This article breaks down the differences!

The 4 Different Types of Airplane Seats on an Airliner

Airplane seats come in various sizes, shapes, textures, and comfort levels, depending on aircraft type. Learn about the 4 different types of airplane seats before booking your next flight!