A Flight in the Training Area to Keep my Skills up

It had been a little while since I had flown so thought I’d book a C172 and head out for a training area refresher. The thing I love about Gil Layt’s Flying School is that, because it’s small, you really get to know the instructors / owners etc. and they get to know you. I only have to say my name and Gil instantly knows exactly what I’m up to. It’s great!

Anyhow, I had VH-TKJ booked for an hour or so from 11am. That gave me time to have a bit of a sleep-in and still have time to organise my flight gear before heading out to Archerfield. I headed on out at about 10am to have time to set up my recording gear etc. On arrival, I was greeted by Gil who said TKJ was still out (to be fair, I was a little early) but DBB is available. DBB has a few issues with its radios, but since I’d flown her before, I was up to speed on what needed to occur.

I grabbed the keys and the maintenance release and headed out to get started. After setting up my gear inside the cockpit, I started on my external pre-flight check. Everything was up to speed so I climbed aboard. Even though it’s taking me ages to get through my PPL, I am starting to feel really confident in making decisions on fuel and oil levels etc. on the fly which is great. They were two things that always scared me because I didn’t fully understand them. I always just went with full and full just to be 100% sure. Now, I assess the situation, complete a few calculations and decide what to do.

Once inside, I finished setting up my gear, turned on the cameras and fired up Cloudahoy before getting into my pre and post start checklists. It’s funny, when I watch the video from my flight, it’s surprising how much I talk to myself haha, but I have absolutely no memory of doing so. Anyway, once everything was set up, I started my taxi roll just as TKJ was pulling in.

I got about 20 meters from Gil’s line when I went to make my taxi call. Technically, at Archerfield, you are allowed to taxi around the apron without permission. You only need taxi clearance as you near the runways, so I generally do it as I’m taxiing to save some time (and money).  I was about 20 meters from the line when I realised my radio wasn’t transmitting, so I pulled over and started to troubleshoot my radio. Everything seemed to be in order; I could hear transmissions. I fiddled around a bit until I finally realised I was using the wrong radio. I completely forgot about DBB’s radio quirk. Bloody thing! Wasted a good five minutes of my time! Oh well, crisis avoided and back on my merry way.

I had clearance to taxi via bravo and cross runways 04 right and 04 left before holding at B5 for runway 10 left and was told to expect a right hand turn. All good so far! While taxiing along bravo, I had another Cessna in front of me that was taxiing quite slowly. If you’ve seen any of my videos, you’ll know that I like to taxi a little faster than most – much to the distain of my instructors. When we FINALLY got to the run-up bay for the 10s, I turned DBB into wind and started my checklist. All was in order so I quickly got going and jumped ahead of the plane I was taxiing behind. Phew!

At the holding point, I radioed for clearance to take off. As there was other traffic landing, first I was told to hold short before being asked to line up after a few minutes. I love lining up because you get to sit there and stare down the runway for a few seconds. It’s great! After receiving my clearance, I applied full power and rocketed down the runway. Initially the climb was really poor until clearing the fence and receiving a large updraft shooting me up to 500 feet. I started my right hand turn and once clear of the circuit, took up a heading of 135° – which is the suggested heading in ERSA to help keep clear of the inbound tracks from Target and Park Ridge. Once I was well clear of the Archerfield control, I switched frequencies to Brisbane Centre, changed my transponder code from 3000 to 1200 and started a slow climb to 2500′. I achieved my 2500′; somewhere over Jimboomba and decided to hang around there to practice some steep turns, stalls and just general balanced flying practice.

My wife’s parents live in Jimboomba, so I made sure I did a few passes to say g’day 🙂

I’ve become fairly good at timing my return to Archerfield from the training area and can usually get back within a couple of minutes either side of the hour. So when I decided it was time, I started my track back to Archerfield. For those that don’t know, from the Southern training area, the first reporting point is the Park Ridge water tower. On a clear day you can see its beacon from a fair way out if you know where to look, but if you can’t see it, the easiest way to find your way home is to locate the Jimboomba township, which has a distinctive u-shape carpark in a shopping centre and then just track straight down the Mt Lindsay highway until you reach the water tower. If all else fails, just head towards the city. You will eventually get to the water tower and can actually see Archerfield from that point.

Anyway, after listening to the ATIS, I changed the frequency to 118.1 and the transponder code back to 3000 before I arrived at the water tower, which I could do with my eyes closed at this point, then made my inbound call (at 1500′). At that point, the controller simply acknowledges my call as I’ll receive joining instructions at my next reporting point, which is over the Logan motorway. Again, it’s really easy to locate the Logan motorway – as you can see Archerfield from the water tower, you just track straight for the middle of the field and a couple of minutes later, you hit the Logan motorway. At that point, I simply say ‘DBB over Logan motorway’, and the controller then gives me my joining instructions. In this case, he told me to join base for Runway 10R. From that point, you do a bit of an awkward wide downwind leg and then join base. As I got there however, the controller told me to change runways to 10L (the big one), which was fine with me.

I took the downwind leg a little wide and ended up with a really long final. Keeping the speed under control, I didn’t really realise how low I took it until I reviewed the video afterwards. It looked like the trees nearly scraped the undercarriage.. eek. I’m sure it just looks worse than it really was haha. Arriving at the threshold nice and low, I flared, dropped the power and waited for the speed to wash off before controlling the sink.. perfect! To be honest, it was probably the best landing I’ve ever done. Yay!

I taxied back to the apron and shut down. Quite a successful day I reckon! I always feel good after a flight. I feel current and it’s good to know my skills are too. 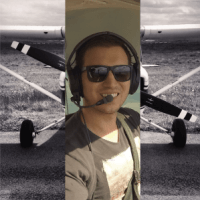 A pilot and aviation blogger living in Brisbane, Australia. Soon (September 2016), I'll be starting a full time CPL (A) course at Basair (Archerfield).