Doing aerobatics in an airplane can be really fun. It’s one of the items that really should be on your Pilot Bucket List. 65 years ago, a guy named Alvin “Tex” Johnston took it a little further and barrel-rolled a Boeing 707 prototype over Lake Washington…

On August 7, 1955, Alvin ‘Tex’ Johnston, Boeing’s chief pilot at the time, pulled off an impressive stunt above a crowd of 250.000, consisting of people attending the Gold Cup Hydro races and airline executives from around the world who were there for an annual meeting. The 707 prototype was Boeing’s first commercial jet airliner and the future of the company was at stake.

Instead of doing just a fly-over as foreseen, Johnston wanted to show off by doing something that hadn’t been done before, he barrel-rolled the airplane. At a speed of 490 miles an hour, he turned the 248.000-pound aircraft on his back and executed a barrel roll. And as if one wasn’t enough, Johnston did a second barrel roll, just to make sure everyone on the ground had seen it. 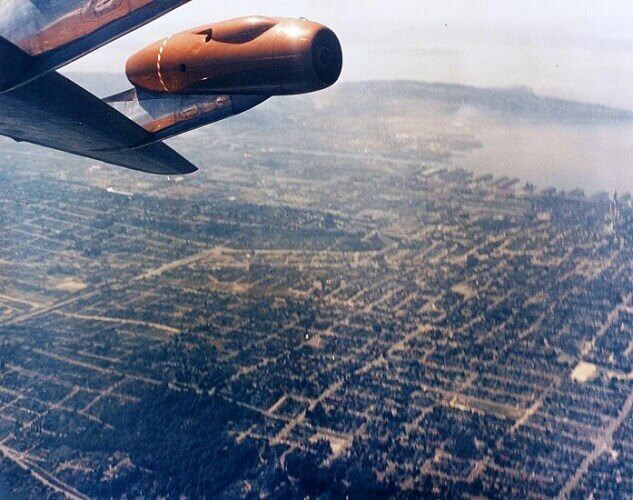 A view from the Boeing 707 prototype as Tex Johnston barrel-rolled over Lake Washington on Aug. 7, 1955. The photo was taken by his test engineer, Bel Whitehead. In the distance are Seattle’s docks on Elliott Bay, and West Seattle beyond. (© The Boeing Company)

Bill Allen, the president of Boeing, knew nothing about Tex’ plans before actually seeing the stunt. The company had invested almost all of its profits in the new prototype and it was all or nothing, because selling a jet airliner wasn’t easy at the time, with a market that was saturated with piston engine aircraft. Allen witnessed the maneuver from a chartered boat and after seeing the second roll, he turned to Larry Bell, founder of Bell Aircraft, who stood next to him and suffered from a heart condition, “Give me one of those damned pills, I need them more than you.” Allen wasn’t sure if there was something wrong with the airplane or Johnston had just lost his mind.

Johnston, captain, had only informed his copilot Jim Gannet and test engineer bell Whitehead of the stunt after they were airborne. The latter was the one who took the famous and dramatic picture of the wing when the airplane was inverted over Seatle.

The morning after the stunt, Allen called Johnston in his office and asked him, “What did you think you were doing yesterday?!” Johnston replied, “Selling the airplane.”

In his book “Jet-age test pilot“, Johnston gave the following reasoning for his actions,

“The airplane does not recognize attitude, providing a maneuver is conducted at one G. It knows only positive and negative imposed loads and variations in thrust and drag. The barrel roll is a one G maneuver and quite impressive, but the airplane never knows it’s inverted.”

Allen ended the conversation with, “You know that. Now we know that. Just don’t do it anymore.”

That evening, Johnston was at Allen’s home for a dinner that included Eddie Rickenbacker, the famous flying ace, when Rickenbacker walked up to Johnston and told him, “You slow rollin’ S.O.B. Why didn’t you let me know? I would have been ridin’ the jump seat.” After that, Bill turned to Allen and said, “Bill, that’s the way to get attention with a new airplane. I wish I could have been there.”

Fun fact: the number 7 used in the names of Boeing jets came from the next sequence in model numbers. 707 was chosen over 700 because the marketing department thought it had a better ring.

Within a month after the barrel roll, Pan Am had ordered 20 planes of the type. Boeing would end up delivering 1.010 of the jets between 1958 and 1994. A B707 would later also become the first jet Air Force One.

Still, it took a long time, if ever, for Bill Allen to forgive Tex Johnston for his stunt. Allen refused to discuss it for years.

Based on an article published in The Seattle Times on August 7, 2015

Tex Johnston: Jet-Age Test Pilot
Check Price on Amazon
If you click this link and make a purchase, we may earn a commission at no additional cost to you.

Want to read another incredible story? Read about the Beech Bonanza that flew under the Eiffel Tower..

As a 26-year-old digital entrepreneur, glider pilot, private pilot and tow plane pilot, Senne is passionate about aviation. He started gliding at age 14 and flew his first solo in a glider at 15. After getting his PPL about 10 years later, he mostly spends his weekends towing gliders into the air. When not flying, Senne spends his time helping companies with marketing & web design, fun projects like Hangar.Flights, traveling and enjoying the outdoors.

The 100 Best Aviation Quotes to Inspire Your Aviation Journey

These aviation quotes by Chuck Yeager, Amelia Earhart, Wilbur Wright and many others aviation pioneers will help you find the motivation and inspiration you need.