Flying From the Right Seat

One thing I’ve found interesting, specifically for PPL, is that once licensed we are legally allowed to fly from either the left or right seat. However, not once during my training did I do any control manipulation from the right seat, much less a takeoff or landing.

A couple nights ago (wish I could upload pics but I know Senne is working on it), I went up in an Archer with my friend who recently got his instrument rating. We had a really nice flight through Southern California starting in the evening, landing at Montgommery Field near San Diego, flying along the coast for an ocean sunset and a landing at the busy SNA John Wayne airport before finishing the night flight home. It was one of those amazing sunset over the ocean beauties that we love.

I’m wondering what everyone’s thoughts are on flying from the right seat? It’s occurred to me that I might experience a failure of controls on the left side only that would still allow the plane to by flyable from the right side, and that maybe I should go up with an instructor to practice at least some landings from that side. Has anyone ever done this?

Also, for anyone who’s instrument rated out there, my friend did let me manipulate the controls for a few minutes, with him as PIC from the left side, and I found it was so difficult to use the attitude indicator from the right side in IMC because of the angle. Part of this I am sure is from the fact that I am not instrument rated; however I know it seemed much more difficult than just the IMC; it was like the attitude indicator was more difficult to read from the angle. Any thoughts on this? 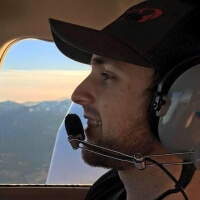 Private pilot, single engine land, licensed in 2009. In my late twenties, fly mostly piper archer and 172 with my flying club. It's a passion, of course