A particularly intense scene in the survival thriller film “Vertical Limit” shows a harrowing helicopter drop-off at twenty-two thousand feet. In the scene, a helicopter struggles to disembark six mountain climbers on the bluff of Pakistan’s K2, one of the world’s tallest peaks.

I remember coming away from the movie with the question. Why do helicopters struggle to fly at high altitudes? 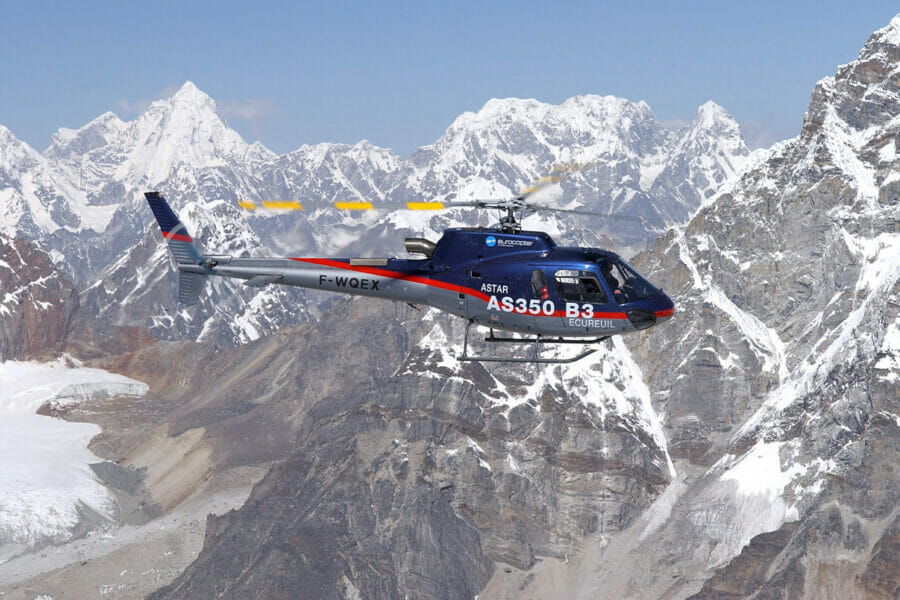 Though my question seems simple enough, the answer is not that straightforward. Helicopters are exceptional machines capable of performing remarkable feats like plucking stranded climbers off mountains. But their performance is limited by aerodynamics, engineering, and commercial trade-offs making it difficult or downright impossible to operate in high-altitude conditions.

Most helicopters can fly at a maximum altitude of around 25,000 feet, depending on the helicopter engine and its function. However, manufacturers and operators generally limit helicopter flight operations between 10,000 to 20,000 feet.

A helicopter’s forward flight capability is determined by its engine ability to breathe thinner air. Helicopters with gas turbine turboshaft engines perform better than piston-engine helicopters at higher elevations. For example, the Eurocopter AS350 Écureuil can reach 29,000 feet, while the piston-engine Robinson R22 helicopter has a maximum flight ceiling of 14,000 feet.

In-Ground Effect IGE is a state where a helicopter can hover at a higher altitude due to the aircraft’s proximity to a hard surface. The effect created from the reaction of the rotor blade’s downwash with a ground presence, e.g., a mountain terrain, reduces drag on the blades and provides more significant lift with less engine power output.

A helicopter experiencing an Out of Ground Effect has a lower hovering ceiling. It uses more engine power when climbing due to the lack of a solid surface or ground presence for the rotor downwash to push against.

An excellent example is the Aerospatiale SA-330 Puma, one of the most popular twin-engine medium-lift helicopters. It can reach a maximum altitude of 15,750 feet during forward flight, including a hovering ceiling of 7,315 feet when In Ground Effect, making the SA-330 Puma an ideal option for mountain search and rescue missions. 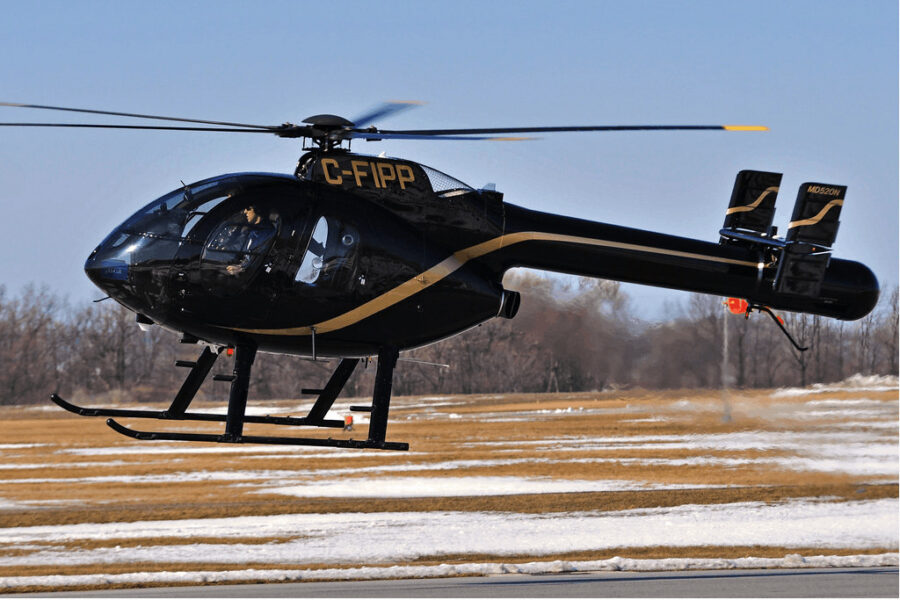 Why Can’t a Helicopter Fly Higher?

Helicopters can not fly at extreme altitudes due to aerodynamic, environmental, mechanical, and economic issues that limit a helicopter’s ability to generate high altitude lift.

Air density is an environmental factor influencing efficient helicopter operations at high altitudes because the lift generated by the helicopter blades and engine output increases in denser air and decreases when the air is thinner.

Air molecules at sea level are closely packed (1,225 kg per cubic meter) due to the effects of gravity. But as you climb higher, air molecules decrease, resulting in a thinner atmosphere. For example, at 29,028 feet (8,848 m), the air density is one-third of sea-level air density levels.

Helicopter pilots request information on atmospheric humidity changes before taking off. This information is essential because changes in air moisture will affect your helicopter’s hovering ceiling. Minimal changes in atmospheric humidity, e.g., a 20°F dry air moisture change to 80 percent relative humidity, can reduce the hovering ceiling of a 1,600 pounds (726 kg) gross weight helicopter from 5,500 feet to 5,200 feet.

It may surprise most people, but helicopter engines breathe air to function, just like humans need air to survive. Piston-powered and turboshaft engine helicopters’ ability to reach maximum altitude depends on their engine capability to breathe thinner air.

Un-supercharged helicopter engines struggling to breathe at altitudes with decreased atmospheric pressure produce less power while at the same time providing the main/tail rotors the RPM needed to overcome increasing drag created by an increase in blade pitch. 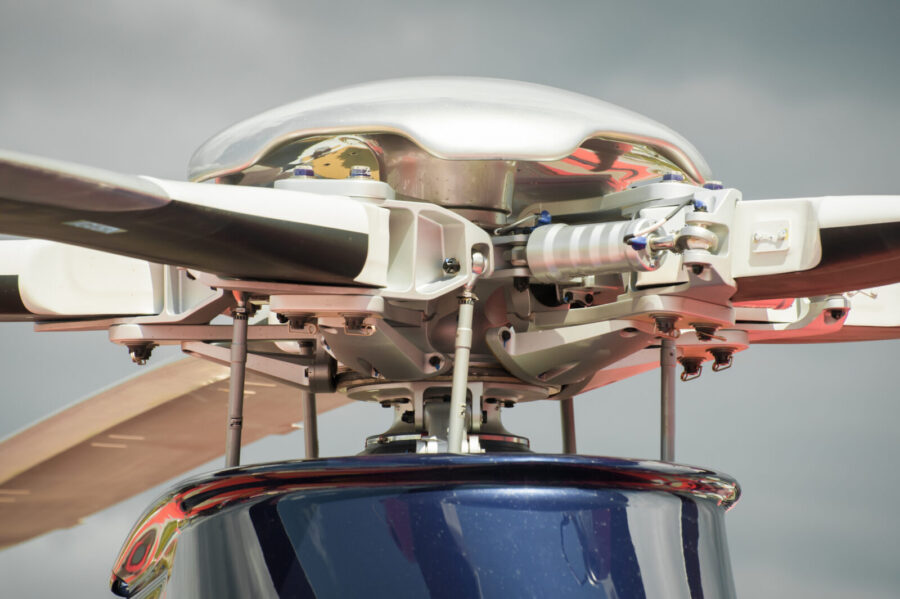 Weight is a significant mechanical factor influencing a helicopter hovering ceiling and forward flight altitude. The heavier a helicopter becomes, the less lift its rotors generate. This works vice versa because when you remove enough non-essential items from a helicopter, its reduced weight can take it beyond the recommended operating altitude.

The Eurocopter AS350 Écureuil (Airbus Helicopters H125) is an exemplary illustration. The single-engine helicopter can climb to 15,000 ft while weighing 4,961 pounds. However, it can reach a higher elevation of 17,000 feet with a reduced payload of 4,561 pounds.

Rotor blades are streamlined airfoils attached to the top of a helicopter and are designed to generate lift by pushing air downwards as the blades spin. They are more efficient when spinning in denser air because more air molecules are pushed downwards over the airfoils generating more lifting power. 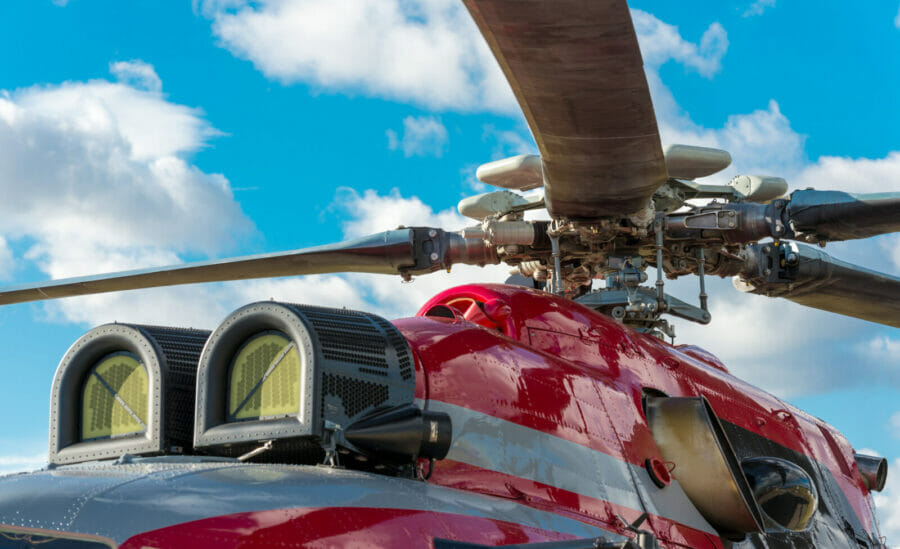 Because there are fewer air molecules in the atmosphere to push against when operating in thinner air. Rotor blades encounter more drag resulting in a low climb ceiling. Experienced helicopter pilots may mitigate this effect by increasing lift coefficient by adjusting blade pitch. Still, the maximum coefficient is quickly achieved in such conditions, and the helicopter refuses to climb higher.

All helicopter manufacturers have what is known as a Rotorcraft Flight Manual (RFM) for each helicopter model. Pilots typically consult these manuals for information on the helicopter operating requirements and performance guidelines for every environmental condition. RFMs also contain performance charts indicating the helicopter’s capabilities and limitations to which helicopter pilots must adhere.

Buy now on Amazon
If you click this link and make a purchase, we may earn a commission at no additional cost to you.
Last update: 17 minutes ago

Most helicopters do not have pressurized cabins or supplemental oxygen systems for high-altitude operations. Although you may be able to fly your helicopter at 14,000 feet of Mean Sea Level (MSL), insufficient oxygen levels at that altitude can make you lose consciousness and crash.

Helicopters capable of reaching extreme altitudes do exist, but they are few and mainly used for scientific research and experimental purposes. Those helicopter types are not made for the commercial market due to their high development costs and low demand.

What Happens When a Helicopter Reaches Extreme Altitudes?

A helicopter exceeding its maximum altitude will be operating beyond its mechanical and aerodynamic capabilities. And in all probability, it will stall and crash unless a highly-skilled pilot is at its helm.

As a helicopter climbs to higher altitudes, its engines and rotors reach peak performance levels resulting in numerous simultaneous equipment malfunctions. Fred North’s experience with his Eurocopter AS-350 B2 light helicopter at 42,500 feet is a perfect way to describe what happens when flying a helicopter at high altitudes. 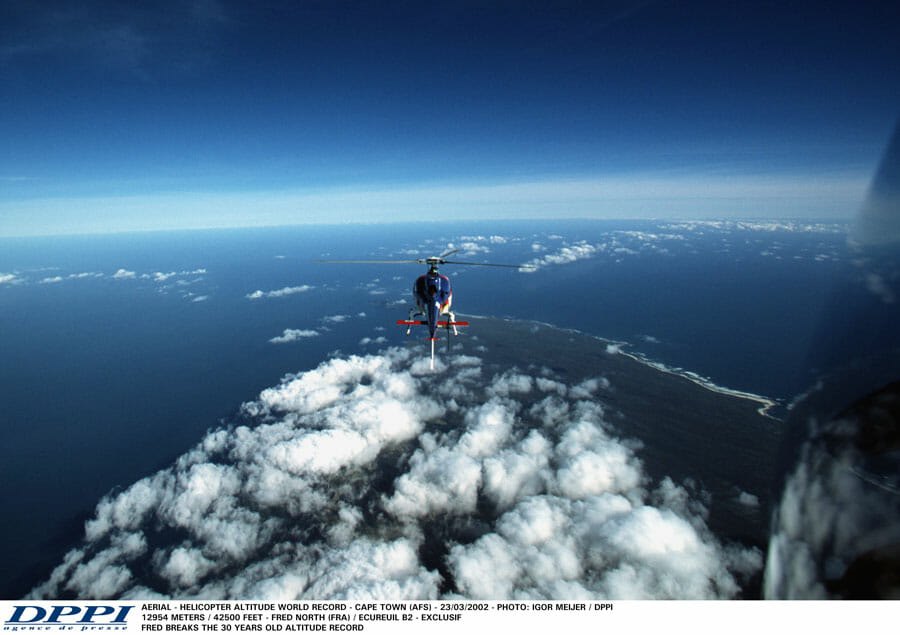 During his record-breaking ascent, North recounts how the helicopter’s engine power output dropped four times less than it produces at lower altitude. He mentioned unusual vibrations coming from his rotor blades as they struggled with stratospheric molecules, the extreme turbulence, and the helicopter’s violent rolling and pitching as it reached its peak operating range.

As he descended from the great heights, North experienced engine failure (a common occurrence when descending). Still, his superior piloting skills kept the AS-350 B2 helicopter on autorotation until he could perform an engine restart at 12,000 feet.

Can a Helicopter Land on Mount Everest?

Although your typical helicopter can not land on Mount Everest, a slightly modified Eurocopter AS350 Squirrel helicopter flown by Didier Delsalle, a retired French Air Force pilot and helicopter test pilot, landed on the summit of Mount Everest at 29,029 ft (8,848 m) on May 14, 2005. He waited on the summit for around 3 minutes and 50 seconds and returned successfully to the Tenzing-Hillary Airport In Nepal.

He repeated the feat the next day under more severe conditions and winds speeds over 299 kph (186 mph) to prove his achievement wasn’t just dumb luck.

Can a Helicopter Fly Above Cloud Level?

Yes, helicopters generally operate between 3,000 to 12,000 feet. They routinely fly above low and middle-level altitude clouds, including cumulus clouds, stratocumulus clouds, and stratus clouds which form between 6,000 feet to 13,500 feet.

What is the Highest Recorded Helicopter Flight?

The highest altitude reached by helicopter is 42,500 feet (12,954 m) by a standard Eurocopter AS-350 B2 light helicopter piloted by Fred North, a professional helicopter test pilot with over 8,500 flying hours. After intensive preparations, North set the record over the South African coastline on the 23rd of March 2002. 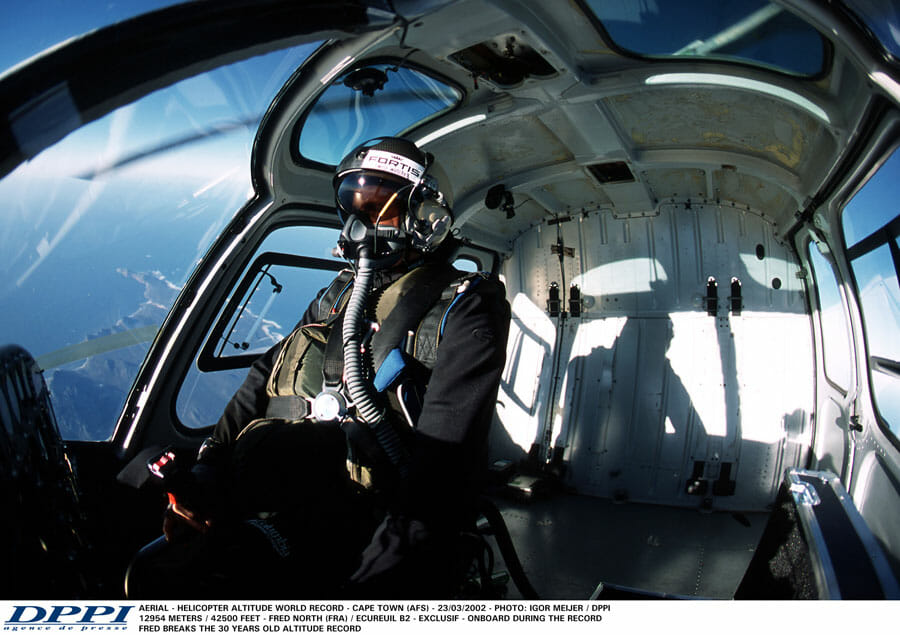 It was equipped with a few gadgets, including a VHF radio, altimeter, oxygen equipment, a special compression suit, a parachute, and a flight report (supplied by Jean Boulet, the previous record-holder) containing information critical to the success of his attempt. North took off with 132 liters of fuel in the AS-350 B2 tank and headed over the Cape of Good Hope, hoping to catch the numerous rising wind currents that would provide lift.

Despite a passing Boeing 747 pilot declaring him “crazy” and a minor mishap with his compression jacket, he quickly resolved mid-flight while struggling to control an increasingly unstable aircraft approaching its maximum ceiling and engine performance (more on that below). North set a new world maximum helicopter altitude record and managed to descend and land successfully. 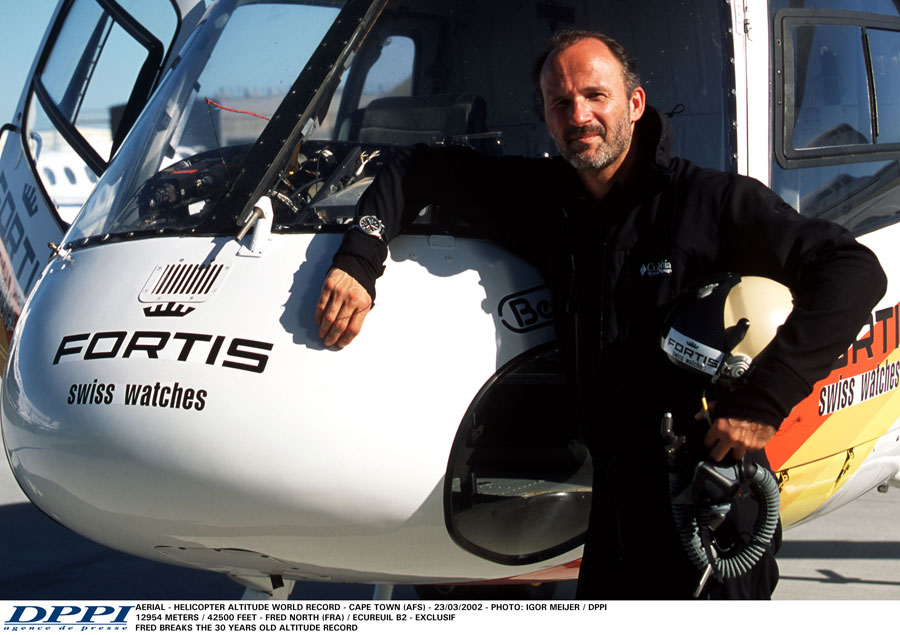 You can read the entire story on Fred North’s website.

As explained earlier, can only ascend to a certain altitude before the aircraft reaches its maximum climb ceiling. You may be able to operate and exceed a helicopter’s maximum altitude under perfect weather conditions and preparation. Although there exist a few record-setting examples out there, these are mainly purpose-built helicopters intended for research and flown by pilots with exceptional skills and considerable experience.

However, future demand may spur the development of a new generation of high-altitude helicopters.