Jet engines revolutionized the aviation industry and shrunk the world, changing how we travel, do business, and relax. Jet engines come in various types, and you may have noticed that airplanes have turbojet or turbofan jet engines when reading about your favorite jet planes online or in magazines.

Turbojet and turbofan engines derive thrust through the ejection of hot gasses created by compressed air burning at high temperatures inside combustion chambers. They share similar (but limited) operational and design features, including an identical low-pressure front section design and the ability to operate at the same altitude. And both engines burn the same fuel type.

You also get to read a short history and learn the different types of turbojet vs. turbofan engines.

So, let us get the show off the ground.

A turbojet is an air-breathing aircraft engine consisting of an intake fan, gas turbine, and propelling nozzle. Unlike reciprocating piston engines, turbojets use hot exhaust gasses from their gas turbine to create thrust.

However, Frenchman Maxime Guillaume first patented the turbojet design in 1921. Two engineers working separately in England and Germany during the 1930s developed the turbojet concept. In 1937, English engineer Sir Frank Whittle tested the first turbojet engine prototype, but the British government halted its development because of a lack of funds and disinterest. However, German engineer Hans Von Ohain’s turbojet project became the first production turbojet engine design and made its first flight in the HE-178 airplane on 27 August 1937.

Turbojet engines significantly influenced the design of early commercial and military aircraft. They enabled us to break the sound barrier setting new flight records and reshaping the commercial aviation industry.

A turbojet engine consists of fewer movable parts than a turbofan engine, consisting of an inlet, burner, compressor, turbine, combustion chamber, and a rear-facing nozzle. 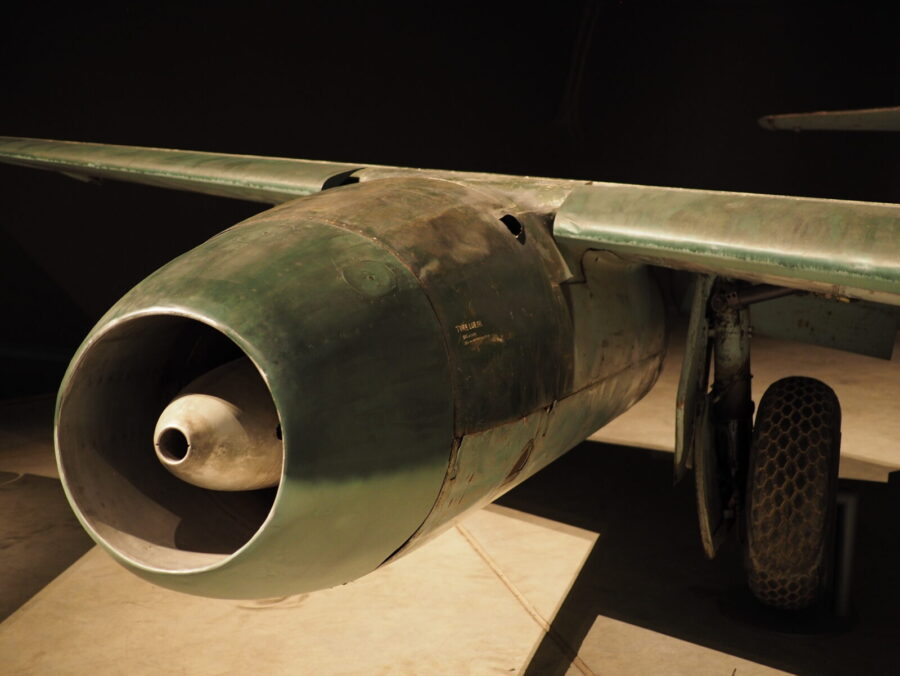 There exist two main variations of the turbojet engine, namely,

It is a turbojet engine using an axial compressor in which the airflow is parallel to the shaft’s rotation axis. It is a standard feature on modern jet engines, and it was developed to coerce extra performance out of the turbojet engine. You can quickly identify an axial-flow turbojet by its longer engine pod with a smaller cross-sectional area which minimizes drag. The advantages of an axial compressor include higher airflow efficiency and increased thrust. 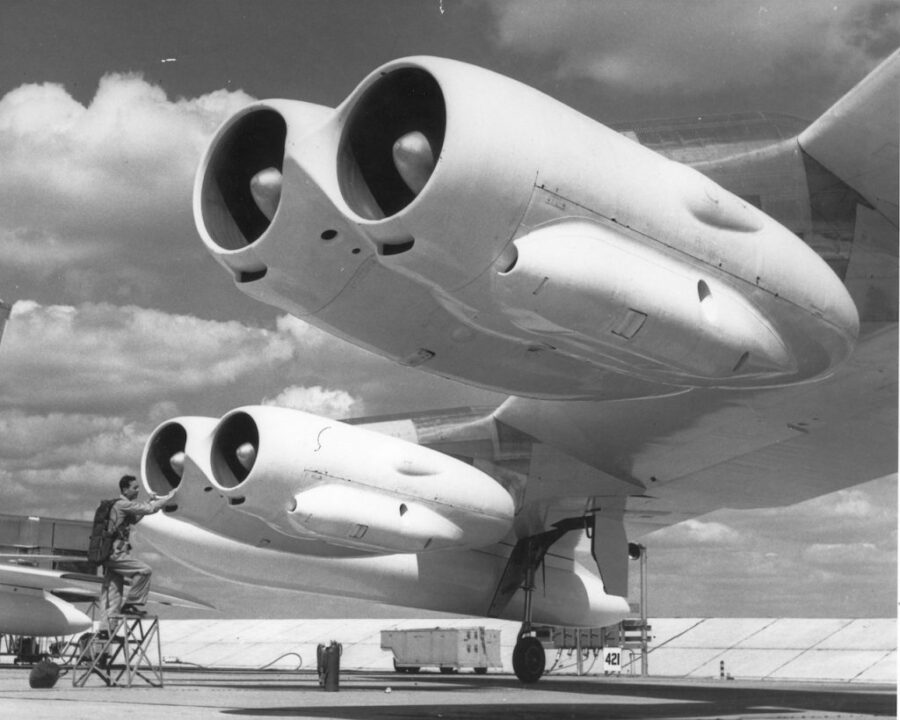 How a turbojet engine works

A turbojet is a gas turbine that operates on the Brayton Cycle by extracting energy from the heat provided through constant pressure. A gas turbine (turbojet) typically consists of three stages, and here is your chance to learn how it works.

Benefits of a turbojet engine

A turbofan engine is the standard air-breathing engine on modern jet aircraft. It generates thrust force by combining two major parts; a gas turbine and a ducted fan. Turbofan engines evolved from the turbojet design concept, But its driveshaft, in addition to driving the compressor, also powers the large ducted fan that produces a secondary thrust mass by bypassing air away from the core engine components.

Early turbofan engine designs debuted in 1943, but it wasn’t until the early 1960s that the first production examples were fitted to the Lockheed C-5 Galaxy military transport aircraft. The massive fans you see on the front of the turbofan engine are its only visual components. They also offer greater efficiency by providing a higher ratio of mass engine flow compared to fuel burn.

The main components of a turbofan engine include the air intake, fan, compressor, combustion chamber, turbine with a compressor driving shaft and fan, and exhaust nozzle. 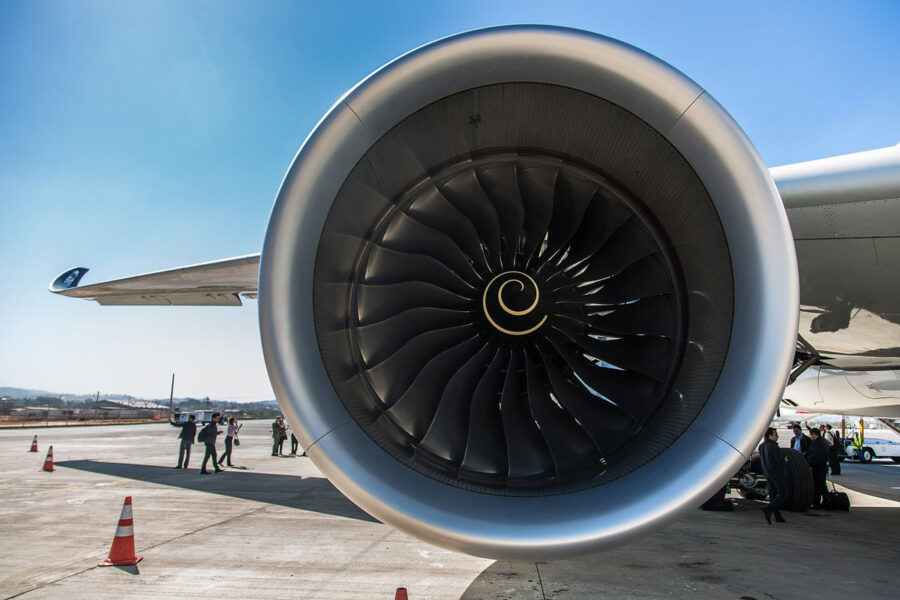 How A Turbofan Engine Works

As implied in the name, the ducted fan assembly of the turbofan engine plays a role in generating thrust. Turbofan engines work by using the air passing through the fan into the core of the engine and the air bypassing the engine to provide thrust for the aircraft.

In the first stage, the engine inlet sucks incoming air and passes it through the fan into the core compressors, pressuring the air before sending it into the combustion chamber, which completes the second stage.

Some of the air passing through the fan during the first stage goes into the nacelle bypassing the engine. It is expelled through the cold nozzle at high velocities without undergoing pressurization or combustion.

Since a turbofan engine derives thrust from both hot air generated by the core and cold air from the fan, the ratio of the air going around the engine to the air passing through the core is known as the bypass ratio (BPR). 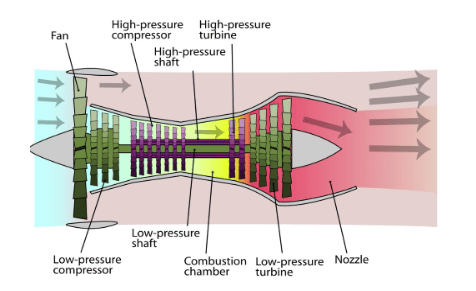 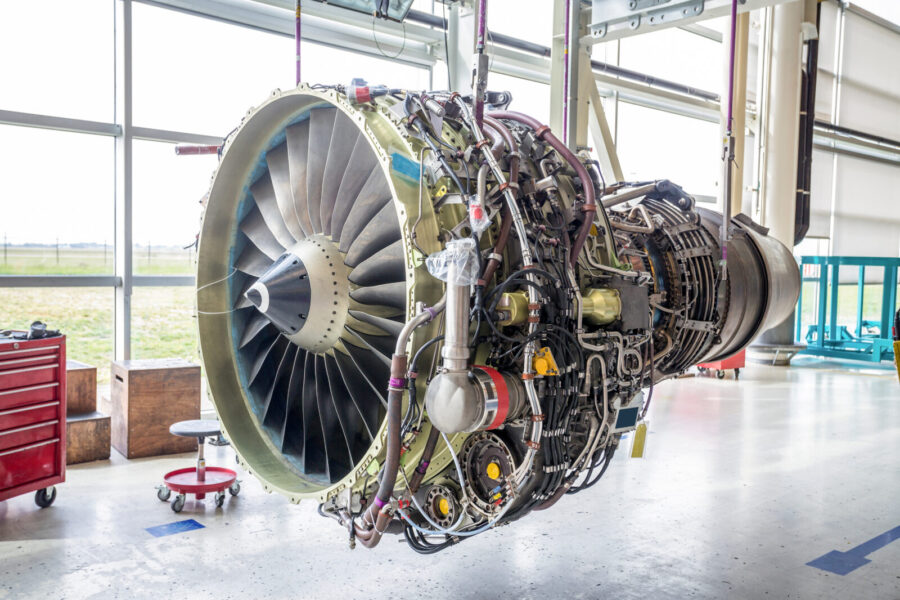 Benefits of a turbofan engine

Turbofan engines are the most modern jet engine types in production, offering a high degree of flexibility and performance for aircraft of all sizes. Here are some of the benefits of a turbofan engine. 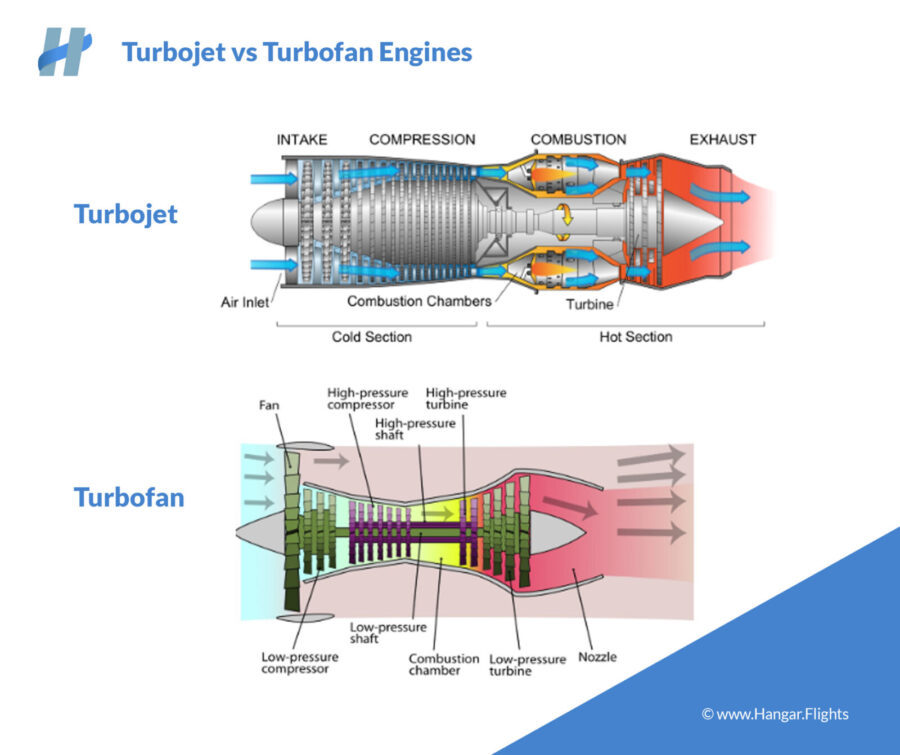 As you know, the production of turbojet and turbofan engines has been for over fifty years, with numerous examples on commercial and military aircraft. Although the use of turbojets has declined in favor of turbofan engines during recent decades, it still powers several aircraft around the globe.

Are turbofans more powerful than turbojets?

Turbofan engine designs have better efficiency and generate more thrust ratio per weight, making them more suitable for both high or low-speed operations at high or low altitudes than turbojet engines.

There are five different types of aircraft engines, and most of these engine types have different subclassifications. Let's take a closer look at them!