Aircraft wings are airfoils that generate lift by moving air over them, allowing a plane to get airborne safely. They are an aircraft’s most crucial component and perform additional functions like holding airplane fuel. Airplane wing construction consists of strong and rigid materials, typically large and heavy structures, to support the weight of an aircraft.

Airplane manufacturers used external wing bracing on early planes to reduce the wing’s weight. Modern aircraft have internal structural attachments built into the fuselage and the wings to support their weight and help bear the aircraft’s aerodynamic and landing loads. 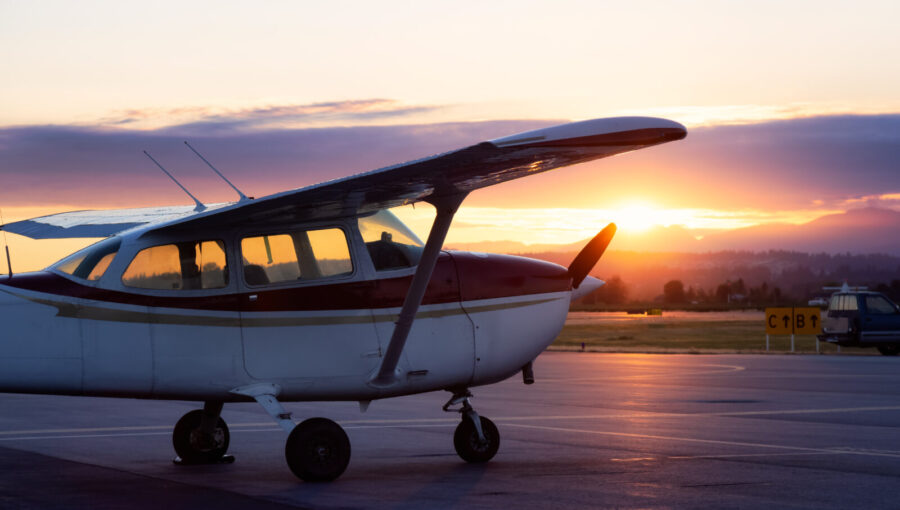 This article identifies the different types of aircraft wings and explains the standard wing configurations and shapes you may find on airplanes.

The wings on early airplanes were made from wood and covered with fabric, and it wasn’t until World War 2 that aluminum and magnesium alloy wings became widespread. The wing skin on modern airplane wings has either aviation-grade aluminum or carbon fiber construction, providing maximum tensile strength during extreme flight conditions.

Aircraft wings consist of two parts, namely, the exterior surface known as the skin and the internal wing. The skin shares part of the wing load stress during flight, shifting the aircraft’s load stress to the inner wing ribs. 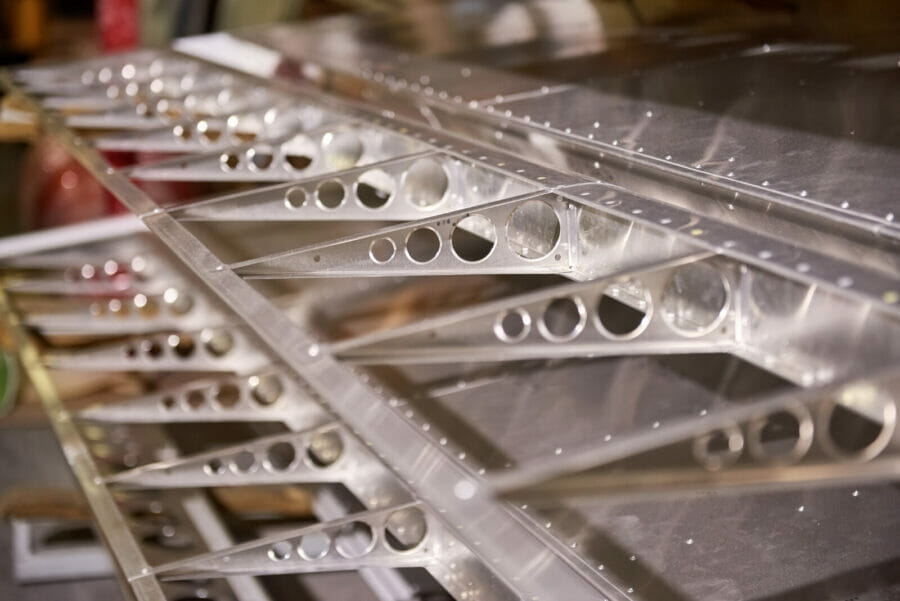 The internal wing structure consists of stringers and spars that run spanwise and bulkheads or formers and ribs that run from the leading edge to the trailing edge. The most critical structural internal wing components are the spars. They bear the brunt of concentrated weights and distributed loads of the aircraft’s parts and systems, such as the fuselage, engines, and landing gear.

Most modern aircraft wings have a self-supporting cantilever design and do not require external supports or bracing to stay attached to the plane. The entire wing’s internal structural members and supports are installed inside the airfoil to provide better aesthetics and low drag. However, some (smaller and lighter) airplanes have external steel struts and wires supporting the wings. 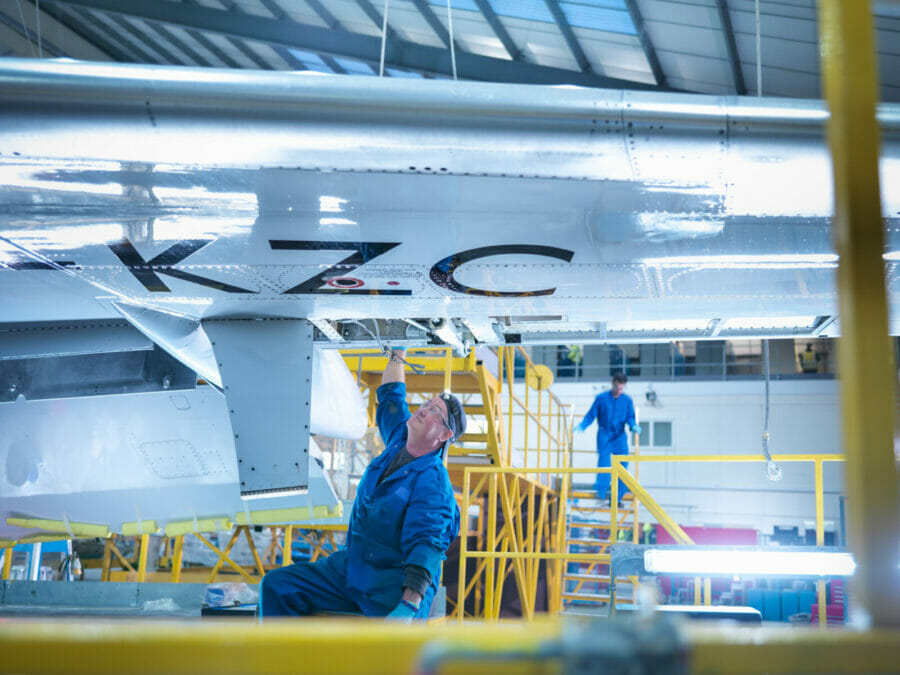 Aviation experts categorize airplane wings based on their shape and design. There are eight common types of aircraft wings, and we will explain them in detail.

This is a basic and easy-to-produce type of aircraft wing that sticks out from an airplane frame at a right angle. Manufacturers often use rectangular wings on small airplanes, and you can easily discern one by its straight edges and non-tapered outline. A primary advantage of a rectangular wing is its easy construction. However, rectangular wings are aerodynamically ineffective, and airplane manufacturers do not fit them on airplanes anymore. This is primarily due to its broad design, which creates larger wingtip vortices and downwash generating insufficient lift.

An example of an airplane using a rectangular wing is the Piper PA-38. 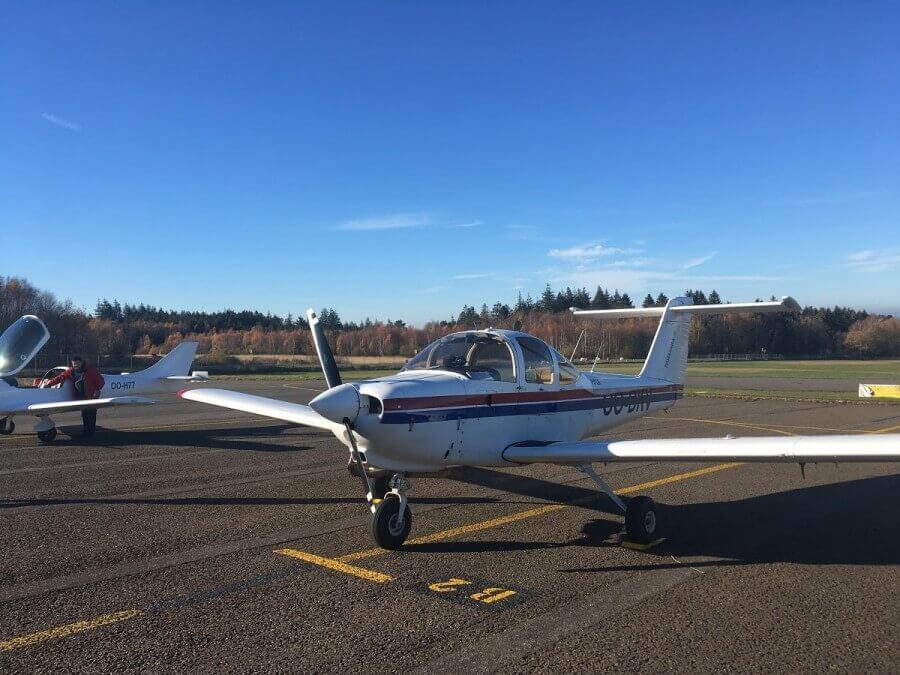 A modified rectangular wing where the wing’s chord varies continuously across the wing span, with a change in the depth of the airfoil. The straight tapered wing type of aircraft wing is more aerodynamically efficient than a rectangular wing because the decrease in the chord length across the wing reduces drag at high speeds providing extra lift. Although slightly more challenging to build than a rectangular wing, the straight tapered wing design offers an excellent trade-off between aerodynamic efficiency and production complexity.

An example of an airplane using a straight tapered wing is the North American P-51 Mustang. The elliptical wing is one of the most aerodynamically efficient types of aircraft wings on a production airplane. Its leading and trailing edges consist of two equal parts of an ellipse providing elliptical spanwise lift distribution across the wings to create the lowest drag forces possible during the flight. The elliptical wing thin structure was initially conceived to house ammunition, cannons, and landing gear. However, its highly efficient aerodynamic wing curvature provides excellent lift distribution forcing aircraft designers to adopt elliptical wings as a standard wing design feature on several aircraft. Elliptical wings are challenging to produce, which is why they are longer used on airplanes. Their design also hides a significant flaw that can cause the entire wing section to stall simultaneously, with the pilot losing control of his aircraft without warning.

Examples of airplanes using elliptical wings include the British Supermarine Spitfire and the Heinkel He 70 “Blitz”. 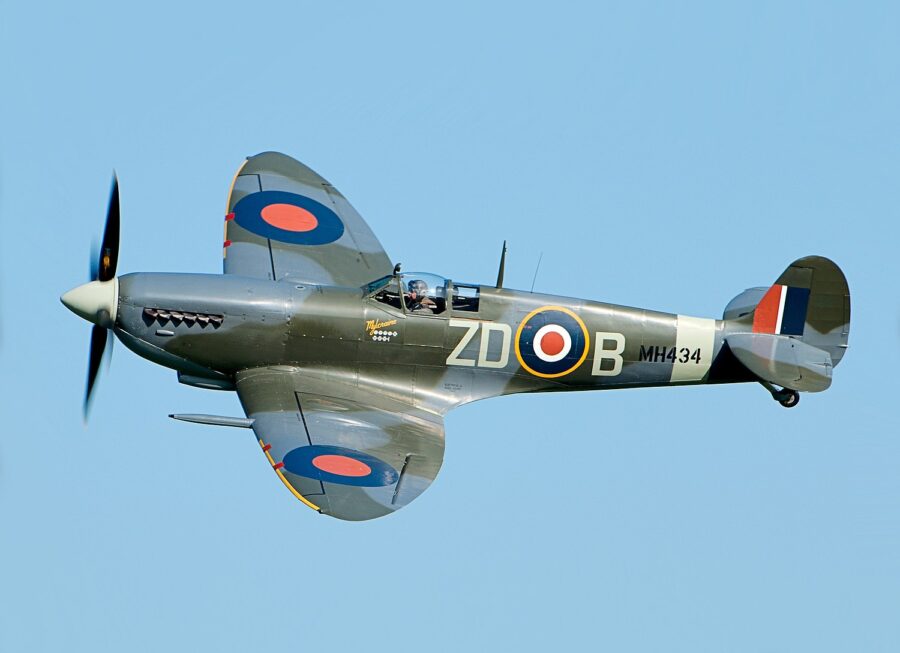 A low-aspect-ratio wing suitable for supersonic and high-speed subsonic aircraft. It has a long root chord and a minimal structure outboard for a structurally efficient aerodynamic performance, increased maneuverability, and reduced wing loading. The delta type of aircraft wing provides greater lift than a swept wing of similar lifting ability, plus they are stronger, lighter, and stiffer.

Delta types of aircraft wings are inexpensive to produce and maintain. And its design provides a deeper structure for storing fuel without encountering significant drag resistance. However, a delta wing needs a high angle of attack to sustain lift during low speeds (typically landing and takeoff), and their low aspect ratio induces drag.

There are several variants of the delta wing offering better flight and handling characteristics. These include: 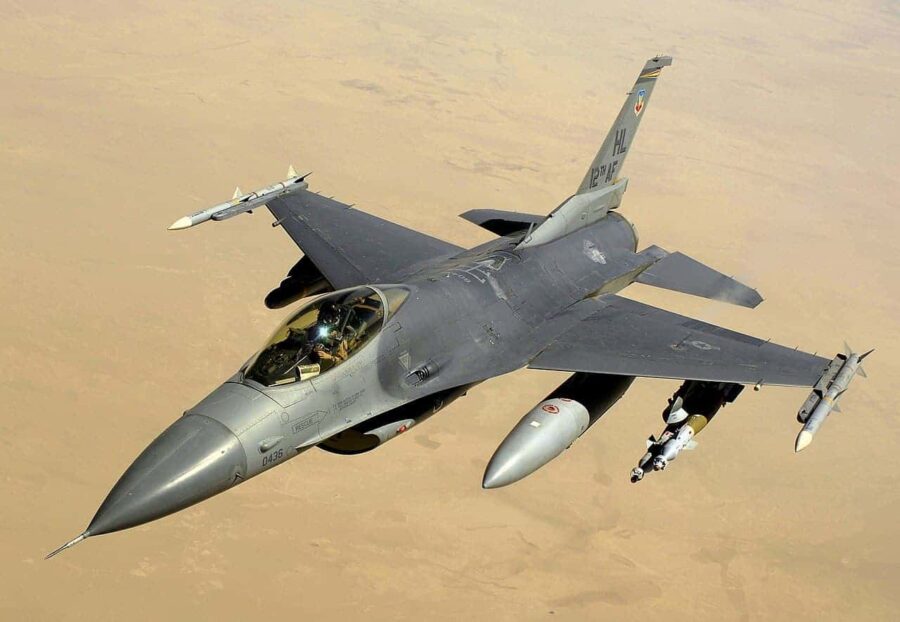 You are more likely to fly in an airplane with swept-back wings than the other types of aircraft wings. In a swept-back wing design, the wingtips are angled sharply backward from the mounting base. This wing type reduces drag during transonic speeds and provides aerodynamic efficiency for large commercial airliners.

An example of aircraft with swept-back wings is the Boeing 787 Dreamliner. 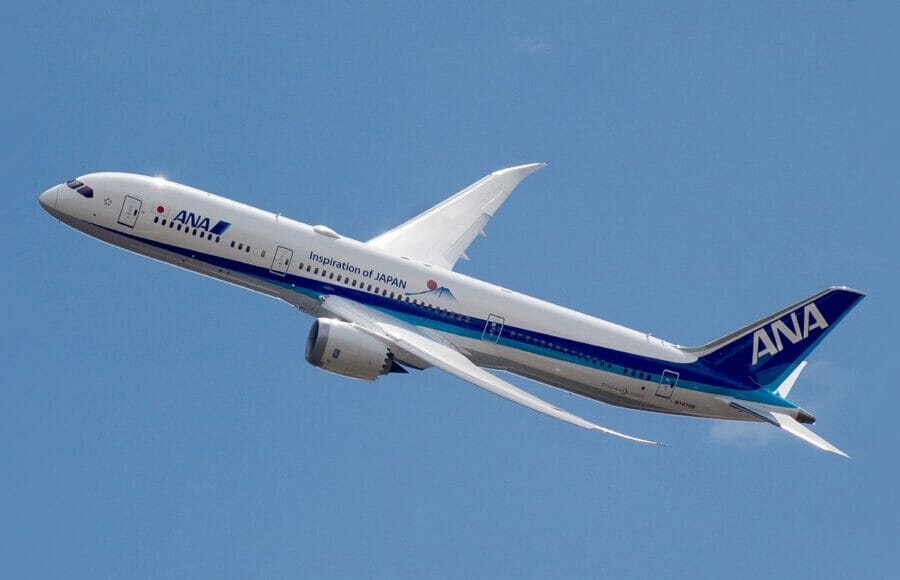 This is a type of aircraft wing configuration in which the leading edge has a forward sweep and the quarter-chord line of the wing sweeps forward. Forward swept-wing design offers a high degree of maneuverability during subsonic flights with a higher lift-to-drag ratio. Additional benefits of forward-swept wings include improved stall resistance and anti-spin characteristics, high stability during a high angle of attack, low flight speeds, and short take-off and landing distance. A significant drawback is wing damage due to twisting as it bends under load stress.

Examples of aircraft with forward-swept wings include Grumman X-29 Switchblade and the Sukhoi Su-47 Berkut. 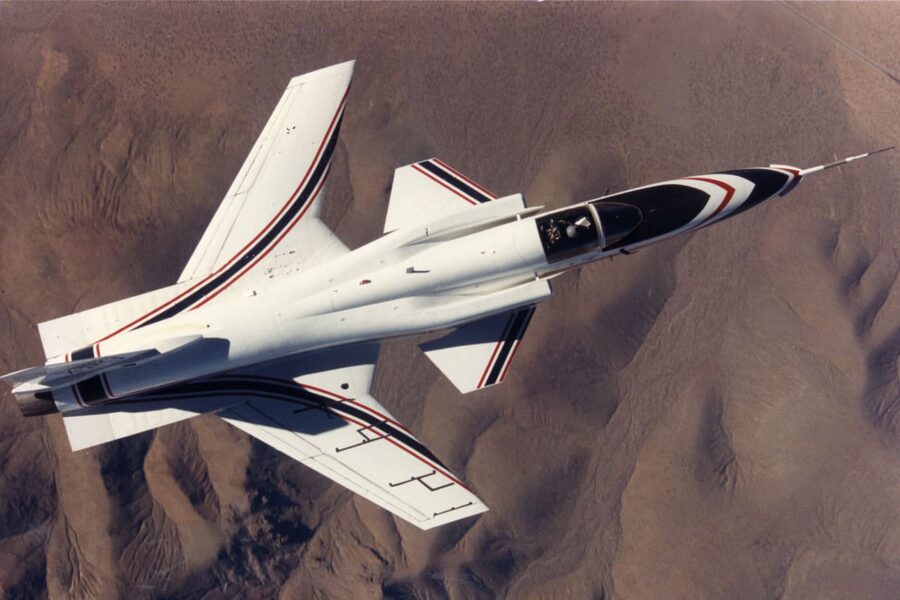 A trapezoidal wing configuration consists of a swept forward trailing edge with a swept-back leading-edge offering exceptionally low aerodynamic drag during high speeds. It often combines thin, low aspect ratio, short-span wings, which can be tapered or not, with durable construction, resulting in increased strength and stiffness.

Military airplanes use the trapezoidal wing type because it provides excellent handling at supersonic speeds and possesses good stealth attributes. A perfect example of an aircraft with a trapezoidal wing is the Lockheed Martin F-22 Raptor. 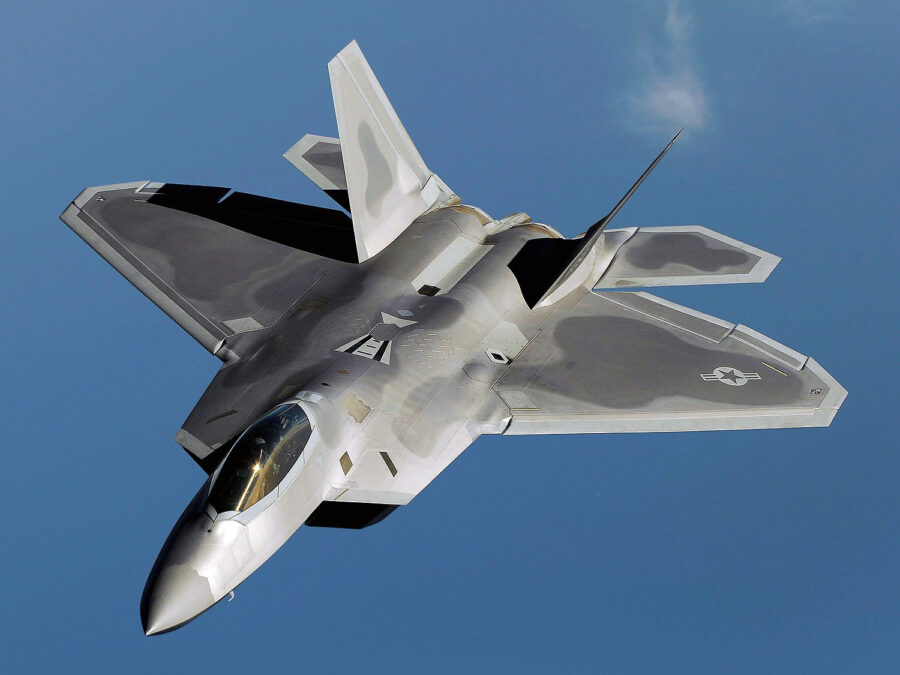 A Variable-sweep wing, also known as “swing-wing,” is a type of aircraft wing with a swept-back feature that can be returned to its initial position. Variable sweep wing configuration provides efficient aerodynamic performance during supersonic flight without sacrificing aircraft stability during low-speed flight periods. The drawback of a variable-sweep wing is its complex mechanical design requires long maintenance hours.

Examples of aircraft with a variable-sweep wing setup include the General Dynamics F-111 Aardvark, MiG-27, Tupolev Tu-22M, and the Panavia Tornado. 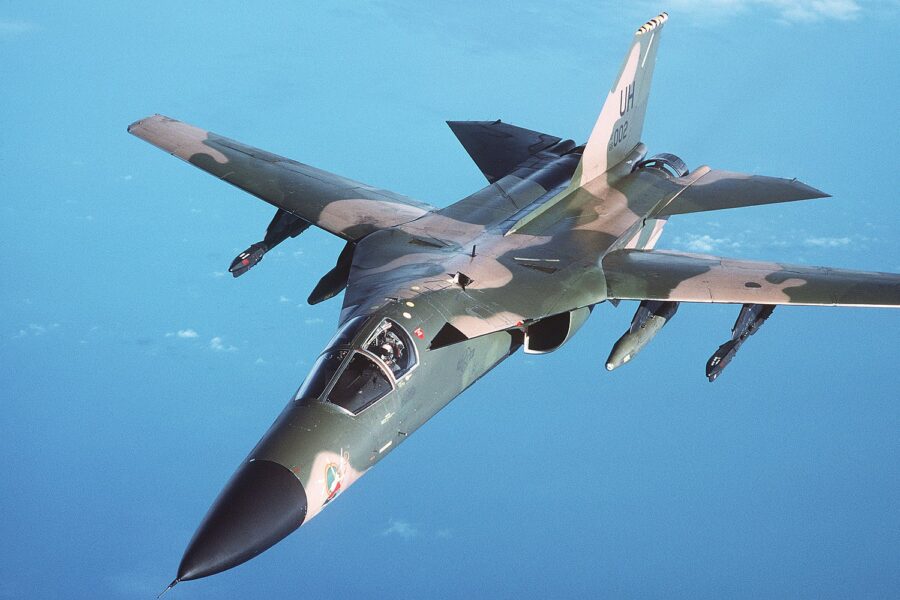 We bet you have a better understanding of the different types of aircraft wings, their benefits and disadvantages. Advancements in aeronautics technology mean that we will continue seeing more radical airplane wing designs in the future. Whether can prove as successful and replace the existing wing types is uncertain.