I have experienced some pretty impressive feats of engineering in my time. Still, the incredible sight of 18 wheels moving a 152-ton structure at a speed of 170 mph without a blowout ranks among one of mankind’s best engineering achievements. Airplane wheels, otherwise known as landing gear, get less accolade than they deserve and endure more daily abuse than any other component.

Airplane wheels undergo the daily torment of multiple takeoffs and landings where temperatures can change from -40°C at cruising altitude to over 200°C at touchdown within minutes. The wheels of a fully-loaded 747 are designed to bear the stress of 437.6 tons at an operating temperature of around 1000℃ during a high-speed rejected takeoff and withstand 235,344 Newtons (52,907 lbs) of downward force per wheel during landing without a blowout. 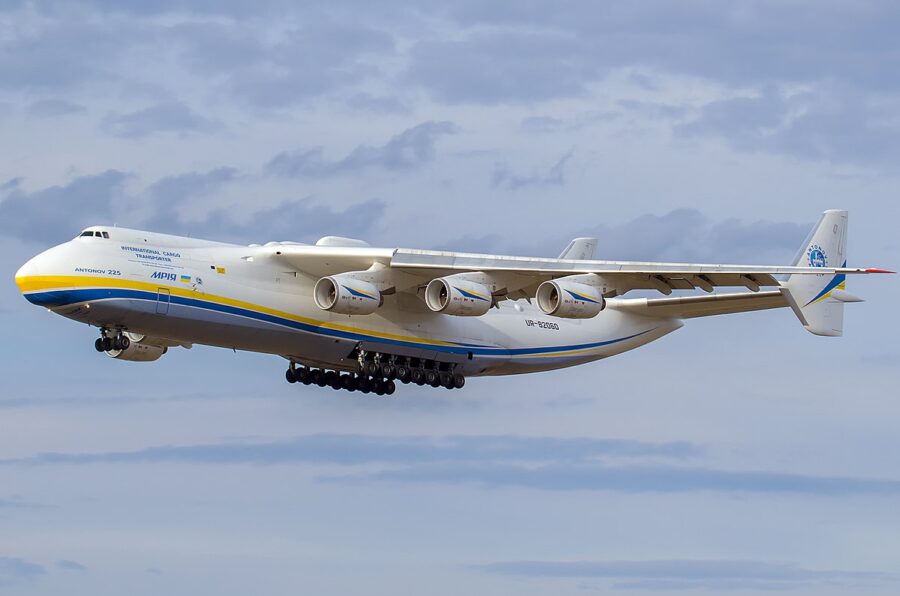 What Determines How Many Wheels An Airplane Has?

Typically, the size and purpose of the aircraft will determine how many wheels it will have. Depending on the aircraft, big and heavy airplanes tend to have more wheels than smaller or lightweight ones. Commercial aircraft require more wheels than private planes to support their massive weight during taxi, takeoff, and landing. Here are a few factors determining the number of wheels on an airplane.

An airplane’s weight is a vital factor in determining how many wheels it has. One of the functions of the wheels is distributing the aircraft’s weight evenly on the ground during landing to prevent runway damage. An excellent example is the Convair B-36 “Peacemaker” strategic bomber, a 75-ton aircraft fitted with a single-wheel main landing gear that weighed 600 kg (1,320 pounds). While the wheels performed according to expectations, they imposed excessive pressure on runways. And the United States Air Force (USAAF) restricted B-36 flights to the Fort Worth airfield and two other USAAF bases. In contrast, the mammoth six-engined 485-ton Antonov An-225 Mriya has 32 wheels to distribute its enormous weight. 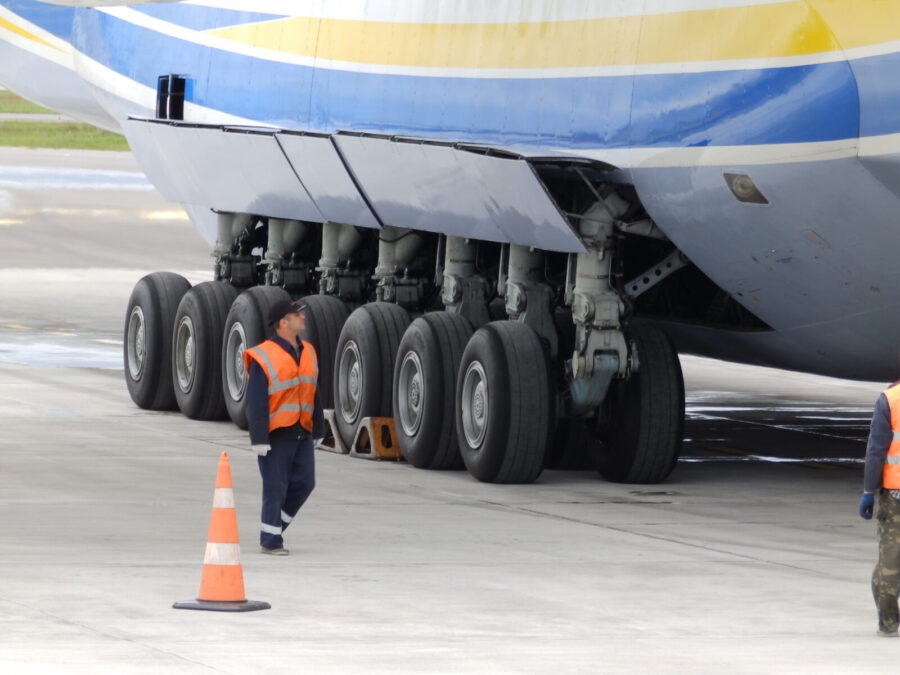 The downward forces during landing

The skidding sounds you hear and a blue puff of smoke visible during landing is the effect of an airplane transferring its weight to the tiny wheels. Downward landing forces have a severe effect on aircraft wheels which may result in a blowout. Smaller airplanes exert a smaller downward force on their wheels than large commercial airliners, requiring numerous wheels to absorb its downward forces safely.

It depends more on the airplane class, weight, and less on aircraft speed. You will see the difference between the number of wheels as we examine different airplane categories.

Gliders and sailplanes have a single non-retractable wheel partially tucked into the fuselage for towed takeoffs and landings. Since they have no engines, gliders have minimal weight, and the pilots can tip the aircraft on its reinforced underbelly for braking during landing. Owners may add an extra wheel or skid to the tail. However, two-seater gliders like the Grob-103 and ASK-21 have a nosewheel to support the extra weight. 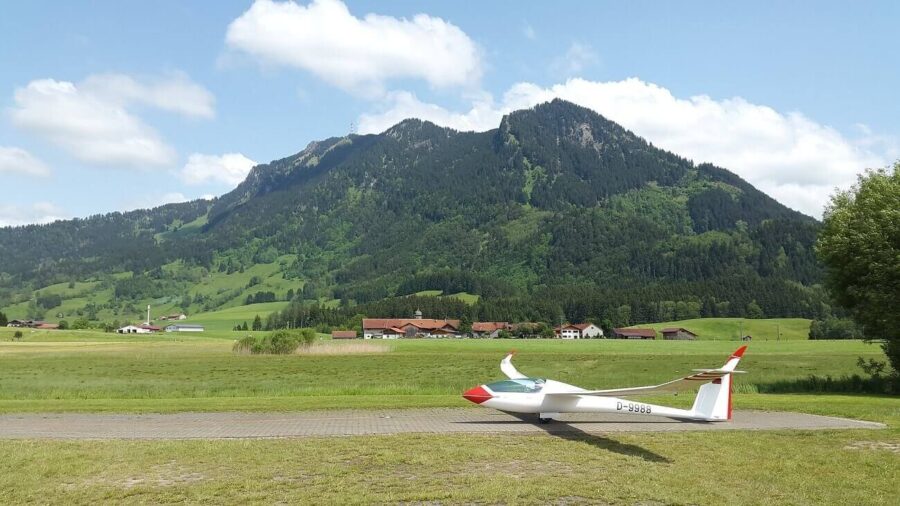 The tiny airplanes you often see buzzing around small airports fall in the general aviation category. These airplanes, which range from the Cessna 150 to the larger and more expensive Piper M600, have a three-wheel tricycle or taildragger landing gear configuration. The three-wheel tricycle configuration consists of a single steerable or non-steerable nose wheel and two main wheels, each slightly mounted aft of the airplane’s center of gravity. And the taildragger or conventional landing gear consists of two main wheels located forward of the center of gravity and a single small wheel supporting the tail. 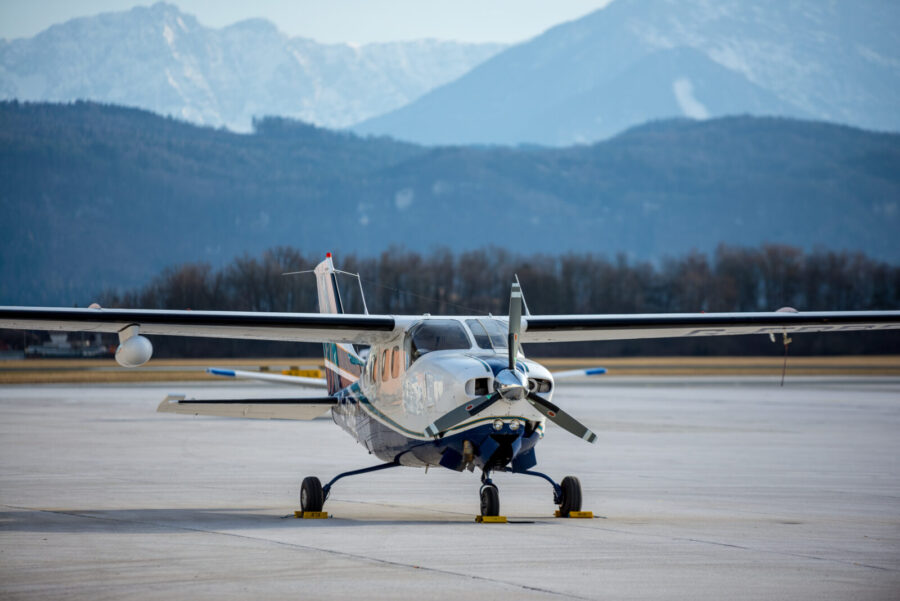 Airplanes in the private business jet category generally have between three to six wheels in the tricycle landing gear configuration. These toys for the wealthy include three-wheeled light corporate jets like the Embraer EMB-500 Phenom 100, the Cessna Citation II, and Honda HA-420 HondaJet with single nosewheels and two main wheels located aft of the fuselage’s center of gravity. Ultra Large business jets like the Gulfstream G550, Embraer Lineage 1000, and the Bombardier Global Express have six wheels. Two nose wheels on the front landing gear and four wheels on the two main landing gears. 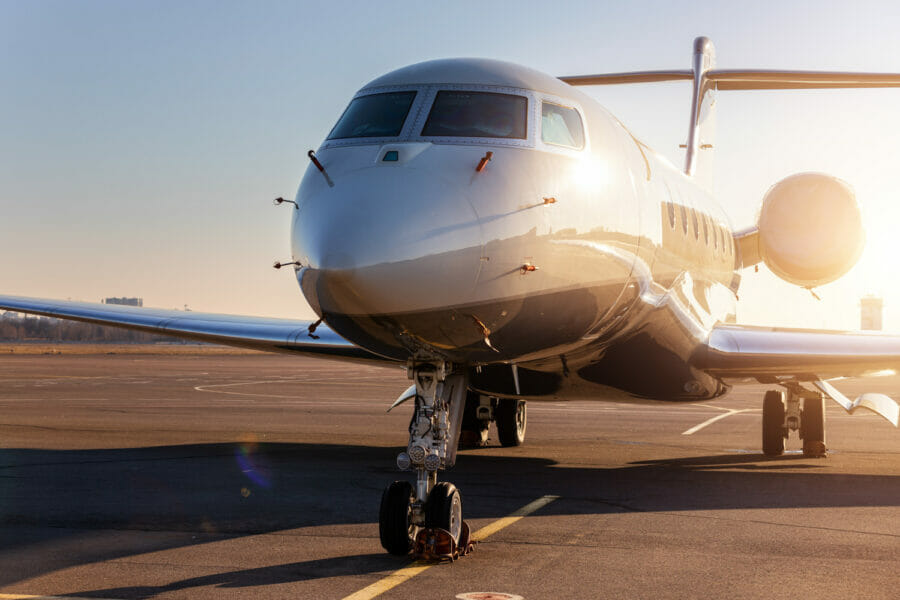 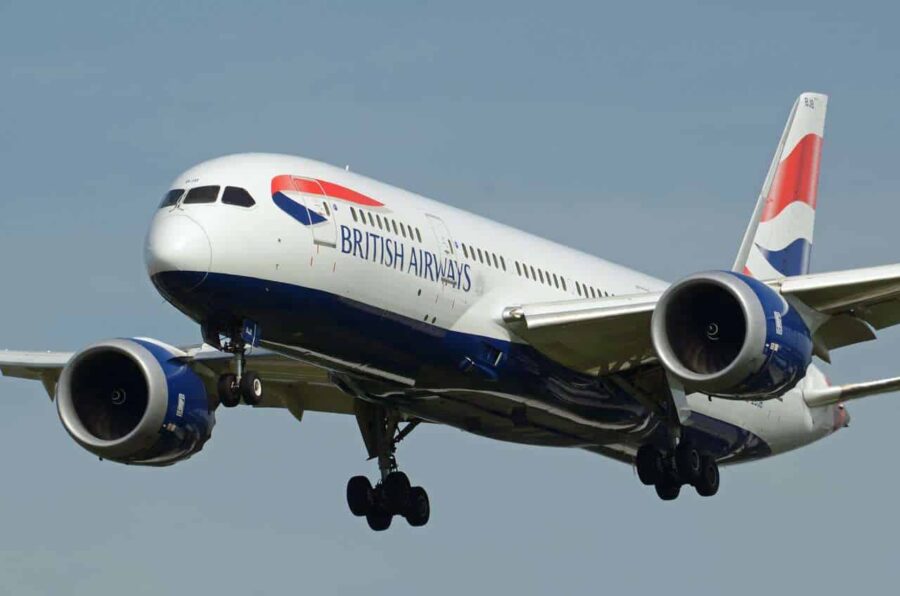 These are behemoths the size of a large warehouse and weighing more than a small office building. Here we are talking about a minimum of ten wheels, although twelve (Airbus A340-300) to fourteen (Boeing 777, Airbus A350-1000) wheels are standard. The Boeing 747 has an astounding fourteen wheels with four rows of wheel bogies on each of its four rear landing gear, and the Airbus A380 tips the scales with a whopping 22 wheels. 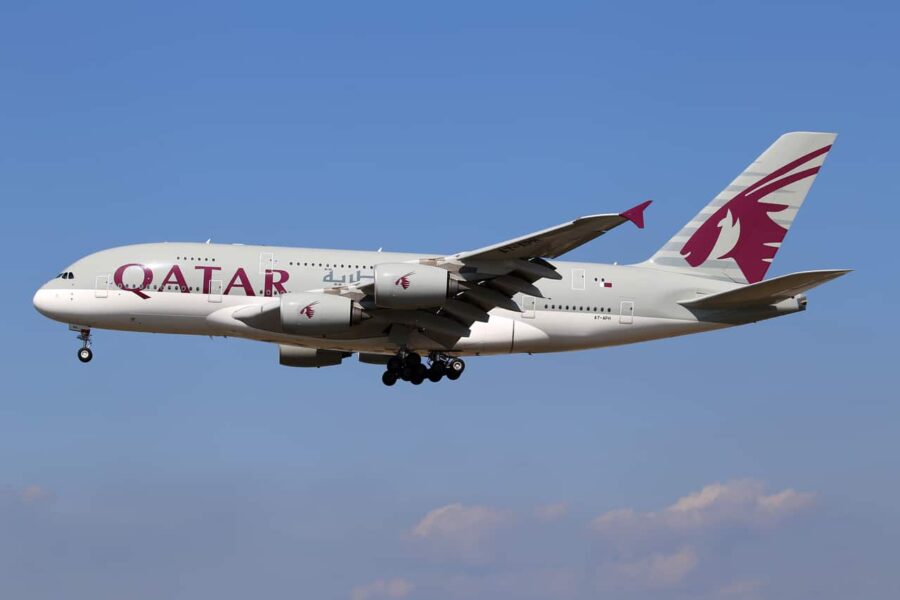 Commercial and military heavy transport airplanes have more wheels on average than widebody airplanes of comparable weight and size.

For example, the C-5M Super Galaxy has 28 wheels fitted to five sets of the landing gear. The four main landing gear has six rows of steerable wheels that rotate 20 degrees left or right. The Antonov range of heavy transport airplanes is fitted with several wheels to distribute their weight evenly across runways. The An-124 has twenty-four wheels, including four steerable front wheels and twenty rear wheels, and the Antonov An-225 has 32 wheels. 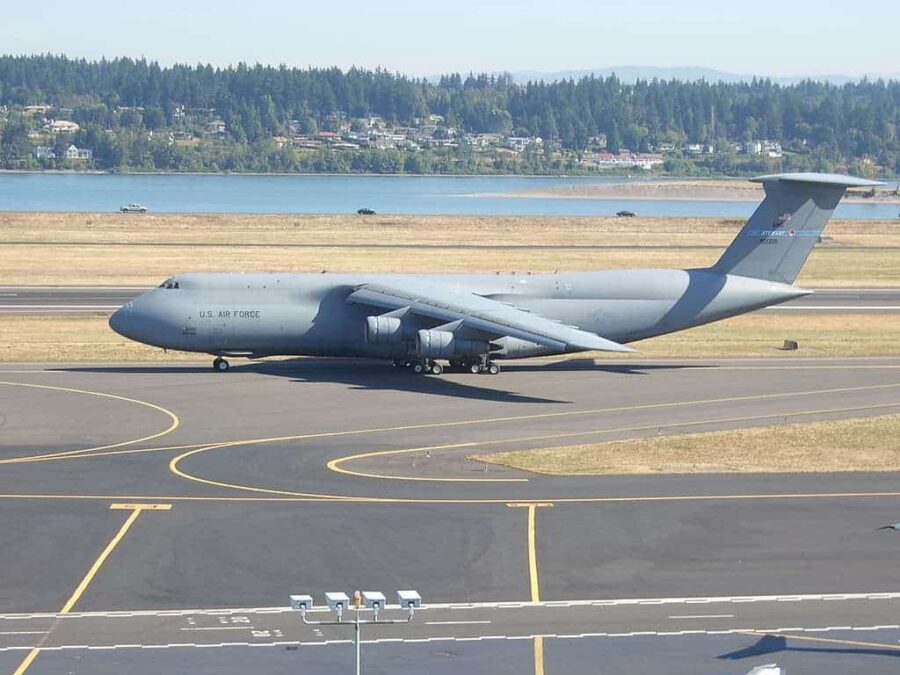 Fighter jets, with their sleek aerodynamic shape, are relatively lightweight compared to other military aircraft, thus their three-wheel tricycle configuration – a single wheel on the front and main landing gear. However, navalized fighter jet variants operating from aircraft carriers have four wheels, consisting of an extra wheel on the front landing gear added to interface with the carrier’s catapult launching mechanism. The British Harrier fighter jet has an unusual five-wheel arrangement consisting of three large wheels and two smaller outrigger wheels. 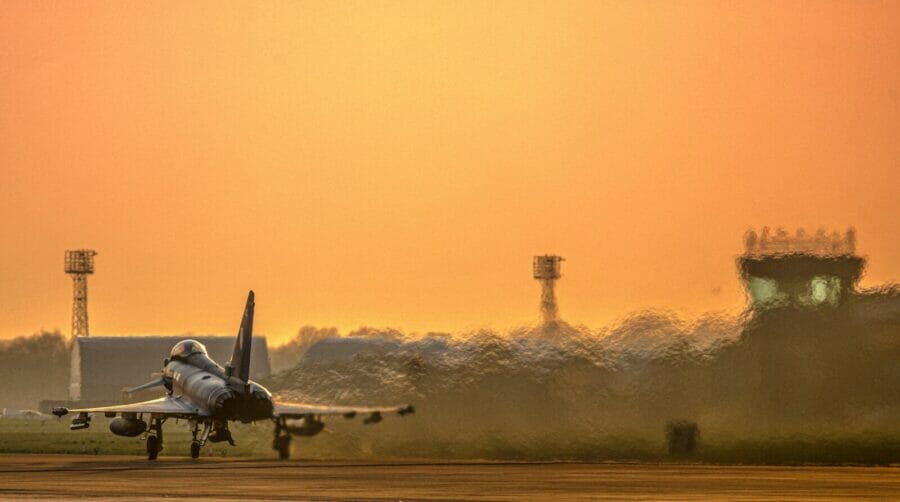 Airplane with most wheels

With thirty-two wheels, the Antonov An-225 Mriya transport aircraft has the most boogies of any production airplane. 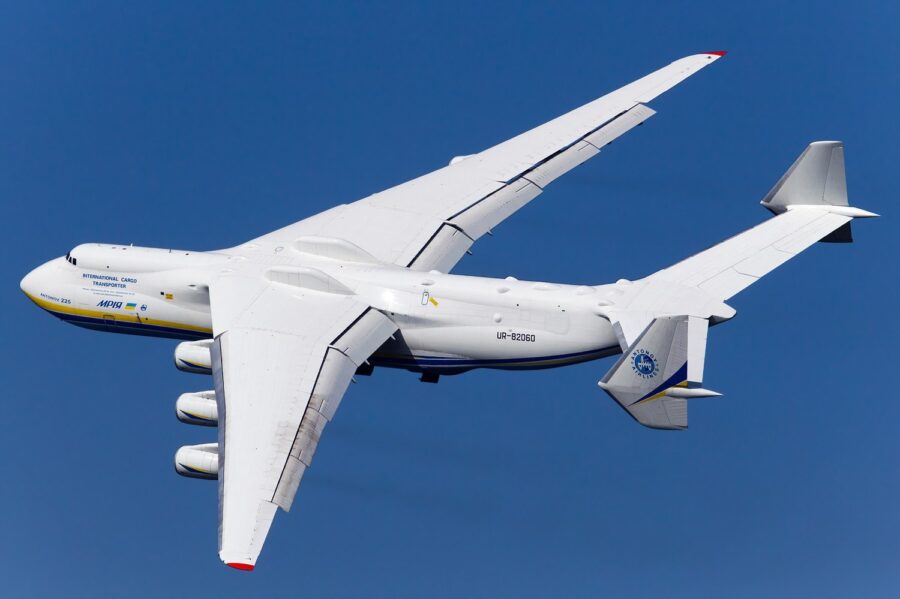 However, several other planes do boast of impressive wheel numbers. The table below illustrates airplanes with the most wheels for anyone interested in finding out how many wheels do airplanes have.

Some airplanes have an unusual-looking wheel configuration that looks weird to everyone except aviation experts and enthusiasts. Although, you are unlikely to notice such aircraft at your local airport or fly in one. These planes are uniquely designed for specialist purposes and may never be publicly revealed.

The bicycle-type wheel configuration usually consists of 2 two or four-wheel landing gear located in tandem along the aircraft centerline. 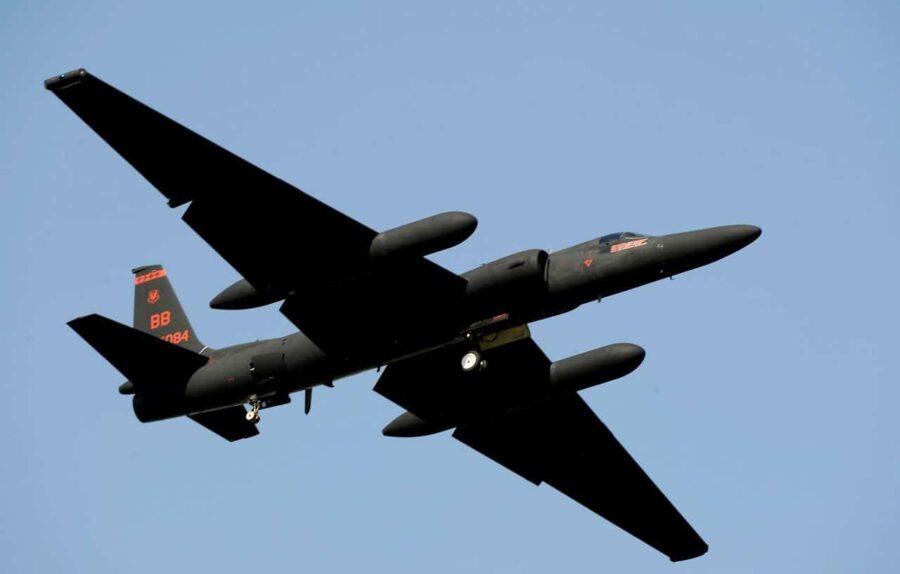 Do Airplanes Without Wheels Exist?

Yes, airplanes without wheels exist, and they are more common than you think. Seaplanes, also called floatplanes, are designed to take off and land on bodies of water on pontoon floats instead of wheels and serve remote areas where there is no conventional runway.

The wheel of an airplane is around 45-inches in diameter, which is tiny compared to the size of an aircraft. However, it is what separates the fuselage from the ground, and it is incredible to imagine that we often forget this fact when hurtling along the runway at more than 200 miles per hour. Fortunately, airplane designers know the correct number of wheels to fit on an airplane to prevent accidents, giving you peace of mind during your flight.