You know how the saying goes: “Speed is life, altitude is life insurance”. The importance of airspeed in aviation cannot be overemphasized. Aircraft that fly too slow are at risk of stalling and losing lift, while those that fly too fast can run into structural problems or overstressing the airframe.

Speed is something that can be measured with multiple units of measurement, including miles per hour, kilometers per hour, knots, and Mach. Especially the latter is an interesting one, but what does Mach mean?

Mach is a unit of measurement that has been used in aerodynamics. It was originally designed for measuring the speed of sound waves, but it’s also come to be used as a general measure of aircraft speed (not helicopters of course, as they don’t reach supersonic speeds). In this article, we’ll go over what Mach means and how it relates to aircraft speeds. 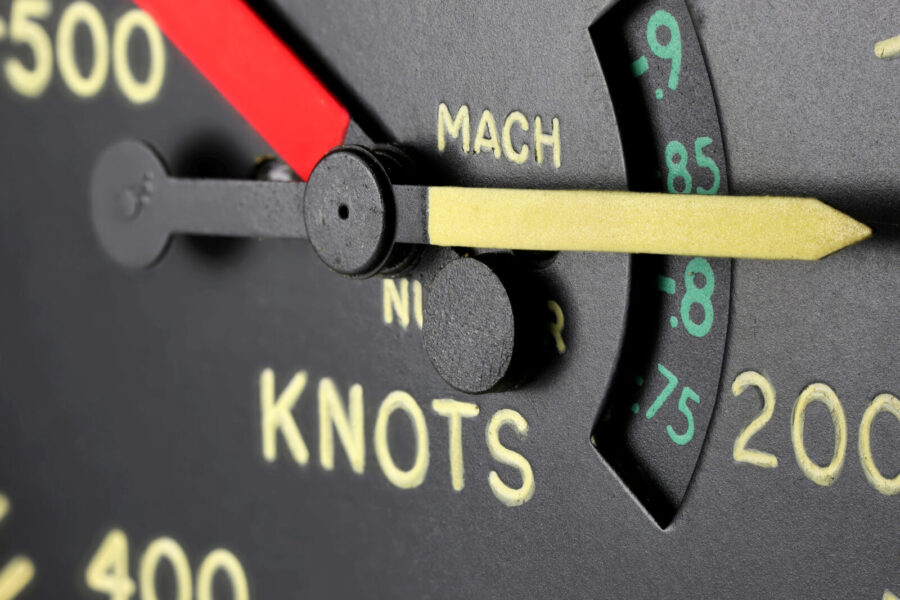 Before we look at the specific units of airspeed measurement, let’s first take a step back and look at the concept of airspeed in general. Airspeed is often defined as simply “the speed of an aircraft relative to the air”.

This is a pretty straightforward definition. However, an airspeed indicator reading of 80 knots in a Cessna 172 doesn’t tell us much about the plane’s speed in comparison to the ground or anything else. We need additional definitions to distinguish between the different types of airspeed: ground speed, true airspeed or indicated airspeed. (there are more types, but let’s focus here on the main 3)

Ground speed refers to how fast the aircraft travels while on the ground and can be calculated by multiplying one’s actual time in hours by one’s distance in kilometers.

True airspeed refers to how fast the aircraft travels relative to the air surrounding it, corrected for air density; this is what pilots work with when they are flying high in less dense air and for navigation purposes at cruising altitude.

Indicated airspeed, which applies only during flight, indicates how fast an airplane appears to be traveling due to instrumentation on board. It uses the difference between total pressure and static pressure to measure dynamic pressure. This is the airspeed measurement that pilots use to fly their planes and determine their takeoff, approach and landing speeds.

Now that we have a better understanding of airspeed, let’s take a look at the different units of measurement, starting with the most common one.

What is a Knot?

To understand the concept of Mach, you must first understand that not all aircraft speeds are measured in Mach. Even though you may find airspeed indicators in miles per hour (or even kilometers per hour), the most common unit for measuring aircraft speed is the knot.

The nautical mile is based on the circumference of the earth and the length of one minute of arc (1/60th of a degree) along a great circle of the Earth. The length of one of these minutes is equal to 1 nautical mile, so precisely 1,852 meters or 6,076 feet. It’s a little bit longer than a statute mile, which is what we use in everyday life to measure.

A knot in aviation describes how many nautical miles an aircraft has covered in one hour. The word “knot” comes from the method of measuring speed over water using a ship’s log. Knots measure speed through the means of traveled distance as opposed to ground speeds which measure the time it takes an object to move a set distance.

Now that we have a good understanding of knots, let’s finally take a look at Mach. 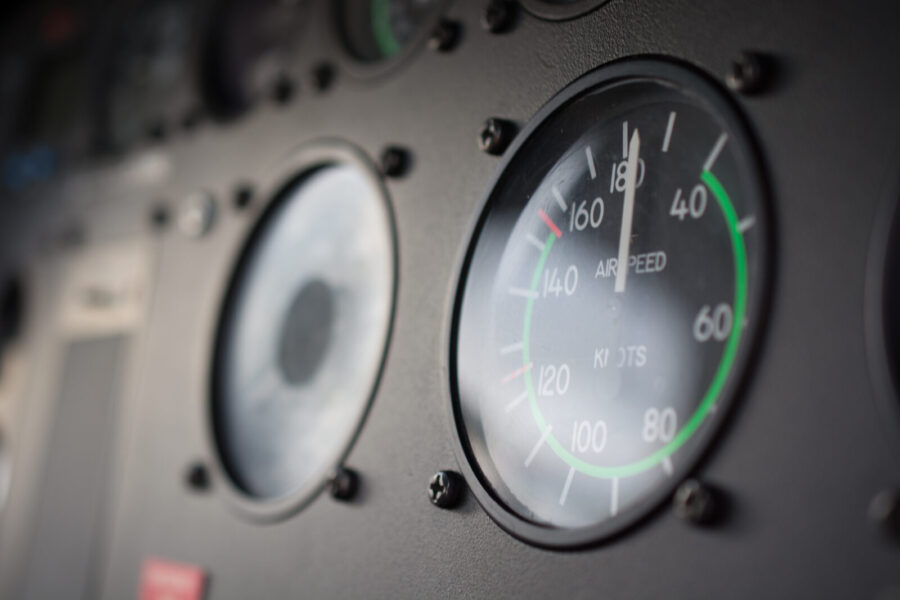 So what does Mach mean? The term “Mach” is derived from the name of Austrian physicist and philosopher Ernst Mach, who was the first to investigate the speed of sound in air. In simple terms, Mach number is a measure of how fast an aircraft is traveling compared to the speed of sound.

Mach 1 is the speed of sound, and at sea level, this number is approximately 340 meters per second (760 miles per hour, 1,236 kilometers per hour).

Aircraft that travel faster than the speed of sound will have a Mach number greater than 1. Because Mach numbers are expressed as a ratio, the number stays the same regardless of what units are used to measure speed. For example, an aircraft traveling at Mach 2.0 is flying twice as fast as the speed of sound, whether that’s in kilometers per hour, miles per hour or knots.

When looking at fast aircraft, such as fighter jets, it’s convenient to look at Mach numbers when comparing speeds, because the speeds do not depend on the units used. 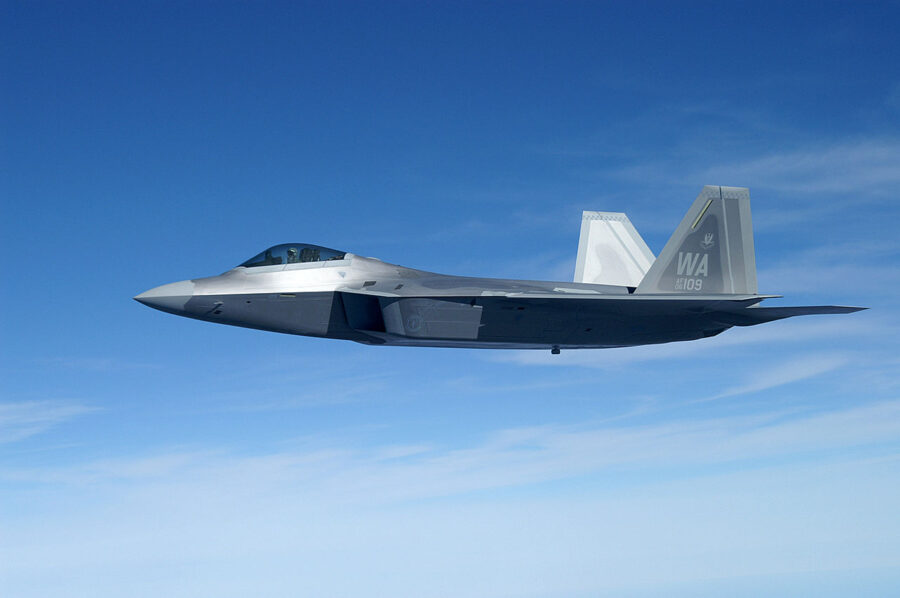 If you’re interested in learning more about fast private jets, we highly recommend checking out this article as well:

What is a Sonic Boom?

When discussing Mach, it’s also helpful to talk about a sonic boom. A sonic boom is what you hear when an aircraft exceeds the speed of sound. An aircraft going at Mach 1 will create a shock wave as it passes through air molecules which, depending on how close together those air molecules are, could cause quite the noise.

The word ‘boom’ is often used to describe a loud noise, and that’s exactly what you’ll hear as the aircraft causes a pressure wave as it ‘breaks’ the sound barrier. The resulting boom is caused by those air molecules being pushed together around an object – or aircraft – going at supersonic speed.

When an aircraft travels slower than Mach 1, the waves emitted continue to travel forward and don’t build up to a shock front. When traveling at Mach 1, the speed of sound, these waves travel forward as well as to the sides and back of the aircraft. The pressure disturbance from these waves builds up so much it’s felt as a loud thunder-like noise, which is why it’s called a sonic boom.

Modern regulations require supersonic aircraft to fly at high altitudes specifically to reduce the impact of sonic booms on the ground.

Supersonic flights over land were once common, but with the advent of concerns about the environment and how a sonic boom can disturb people on the ground, their popularity has dwindled in recent years.

Because of these concerns, sonic booms and their impact on the environment are one of the major factors holding back supersonic flight from becoming more widespread in the future, especially for larger commercial aircraft. Luckily, new emerging technologies are helping to muffle these booms.

While sonic booms can be loud and disruptive, they’re not actually dangerous. The waves created by a sonic boom can cause damage to objects on the ground, such as windows, but that’s really the extent of it.

There is no record of a human ever dying or getting seriously injured as a direct result of sound or shock waves generated by the sonic boom.

The intensity of a sonic boom depends on the size of an aircraft. Generally, larger aircraft can produce more powerful booms than smaller ones. With fighter jets, for example, the smaller the craft, the less intense the boom will be.

These booms can be measured in pounds per square foot or PSF. As an example, the Concorde’s boom was measured at around 2 PSF, which posed very little risk to buildings and other structures, at least not more than what they’re already exposed to from thunderstorms.

Even the most powerful sonic boom experienced so far, would only cause minor damage to a window or two. 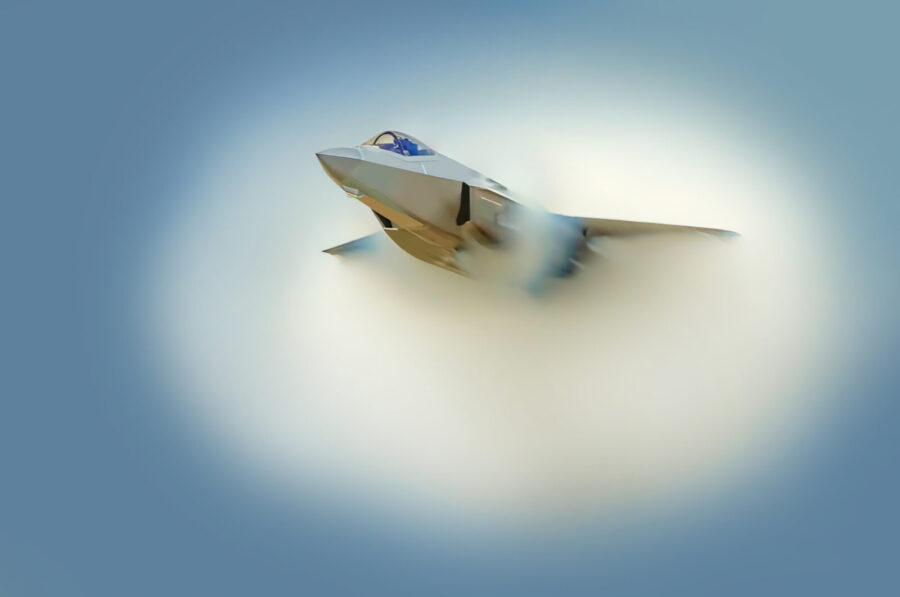 The misconception that sonic booms are easily capable of causing structural damage may be traced back to a notorious set of trials held under FAA supervision in 1964, during which supersonic fighter planes flew over Oklahoma City eight times a day for six months. In the end, over 73 percent of surveyed residents said they could live with the booms indefinitely.

Despite this, the US government received over 15,000 complaints and almost 5,000 damage claims. Most were invalidated as fraudulent, resulting in a public-relations disaster for the FAA and supersonic overland more generally.

Supersonic aircraft are fascinating pieces of technology, and it’s amazing to think about how fast they can travel. Mach numbers are a convenient way to compare speeds without having to worry about the units used, and it’s helpful to know about sonic booms when discussing them. Sonic booms may be loud and disruptive, but they’re not actually dangerous.