An airplane flap is a high-lift device designed to get a fixed-wing aircraft airborne and maintain altitude. Flaps are mounted on a plane’s wing-trailing edges, and pilots use them to perform several functions, including reducing the airplane wing’s stalling speed, increasing the wing’s lift at lower airspeeds, and providing the plane with extra lift force during take-off.

Airplane flaps were invented during the 1920s when aircraft engineers noticed they could use flaps to increase the curvature of a plane’s wings for higher lift and improve the aircraft’s lift-to-drag-ratio characteristics during each flight stage.

The flaps on large airliners can consist of three sections that extend and retract separately during take-off and landing. Small planes have smaller flaps that attach to the wings by hinges allowing them to extend or retract as needed.

Although flaps are vital airplane components allowing safe airplane operation, people outside the flying world know little about them. This article explains the different types of flaps on fixed-winged aircraft, including their purpose and how they work. We will break down all complex technical details into simple terms that non-aviation folks can understand and perhaps know enough about flaps to notice on your next flight. 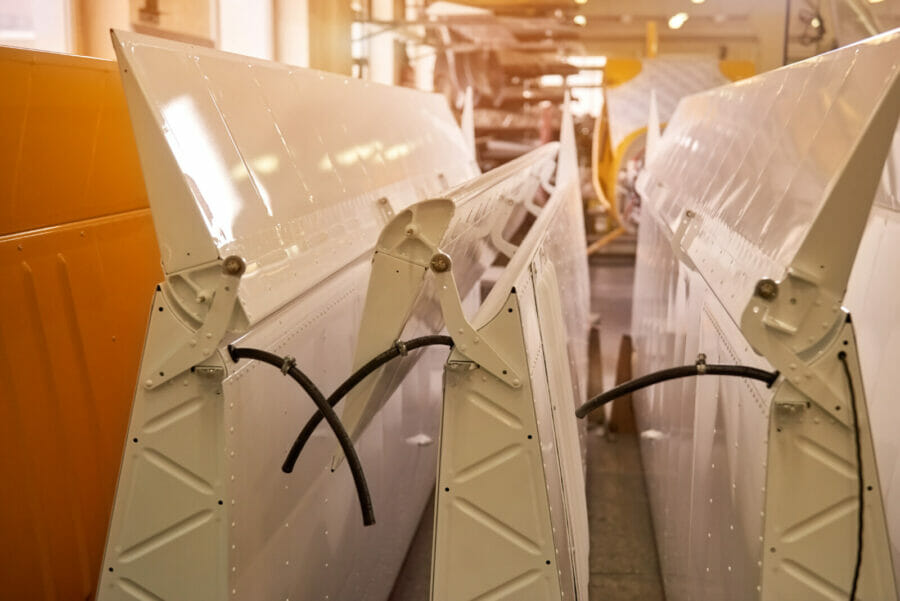 Where are flaps mounted?

How do airplane flaps operate?

Airplane flaps work by extending the wing’s trailing edge downwards to increase the overall wing area, creating more lift. Extended flaps also improve a plane’s drag coefficient by distorting the spanwise lift distribution on the wing. Pilots often use flaps to create a bigger angle of attack on the wing to generate more lift during short take-off and landings (STOL).

Airplane pilots make significant use of wing flaps during the take-off process. They extend the flaps to reduce ground roll and help the wing generate more lift shortening the runway distance traveled by the plane before taking off. The downside of using flaps during take-off is a reduction in the aircraft’s climb rate. Pilots may partially or fully extend the wing flaps depending on the aircraft type. Generally, airplane manufacturers will recommend the flap angle for an aircraft and specify the corresponding reduction in the climb rate.

Pilots can fully extend the flaps to achieve a slower stall speed for a steeper runway approach allowing for a more controlled landing within a shorter runway distance. However, the downside to using flaps during landing is that pilots experience decreased braking efficiency, increasing the stopping distance. The extended flaps continue to generate lift for the wings during ground roll, preventing the aircraft from shifting its entire weight to the wheels and impacting their ability to grip the surface effectively, especially during icy or wet conditions. Pilots can raise the wing spoilers to increase drag or retract the flaps once the plane is on the ground.

There are several types of flaps with different attributes that are all designed to perform a similar function. Each flap type possesses its unique advantage depending on the aircraft’s size, complexity, and speed.

Below are the 9 different types of airplane flaps.

The plain flap is a basic flap design hinged to the wing’s trailing edge and pivots down when extended. Plain flaps help change the wing’s curvature when extended, increasing flow separation at the wing’s trailing edge and creating a larger wake and drag. It allows pilots to fly at a steeper angle on approach without increasing airspeed. The invention of the plain flap in 1916 makes it the oldest type of aircraft flap, but they are outdated by modern aviation standards, and manufacturers rarely use plain flaps on airplanes.

A type of airplane using plain flaps is the Cessna 185. 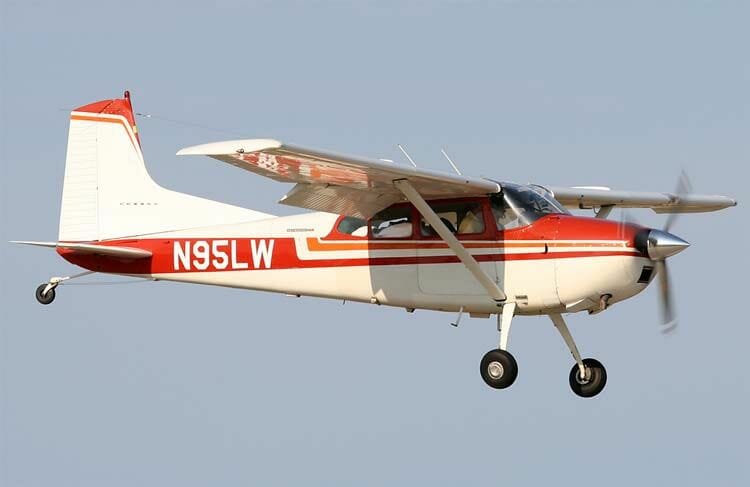 As the name implies, split flaps consist of two sections. The fixed upper part is an extension of the top trailing edge of the wing while the lower split flap is movable and pivots down from its hinges on the lower wing surface to generate drag. The split-flap lower section has similar drag-producing characteristics to a plain flap while producing higher levels of lift. Pilots often use a fully extended split flap as a spoiler because it increases a plane’s drag coefficient without generating significant lift. Split flaps are among the oldest types of flaps and saw widespread use on military aircraft after their introduction during the 1930s.

The Douglas DC-1 (progenitor to the DC-3 and C-47) was one of the first of many aircraft types to use split flaps. 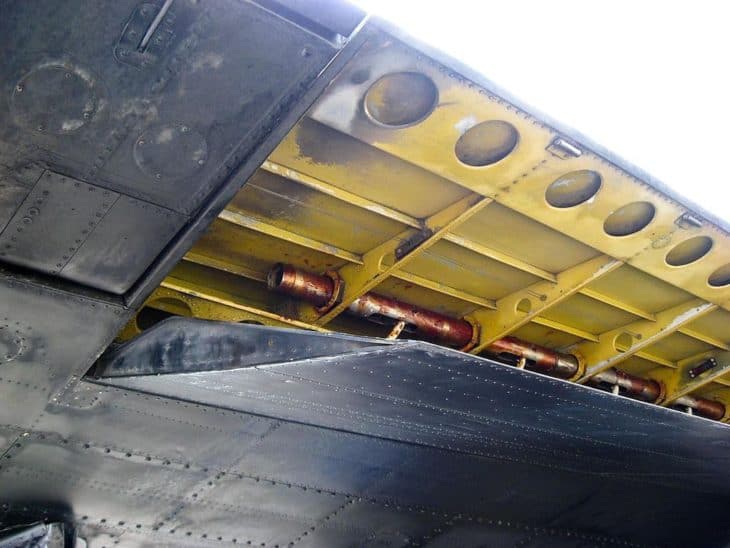 Split flaps on the Avro Lancaster.

The slotted flap is a type of aircraft flap designed with a gap between the wing and flap, allowing high-pressure air beneath the wings to flow, reducing air separation levels while increasing lift. It is the most common type of aircraft flap seen on small and large commercial airplanes. Slotted flaps have a similar look and design to plain flaps but have distinctive aerodynamic slots between the flap and wing maintaining airflow around the flaps to reduce drag increasing while increasing lift.

A type of airplane using slotted flaps is the Cessna 172. 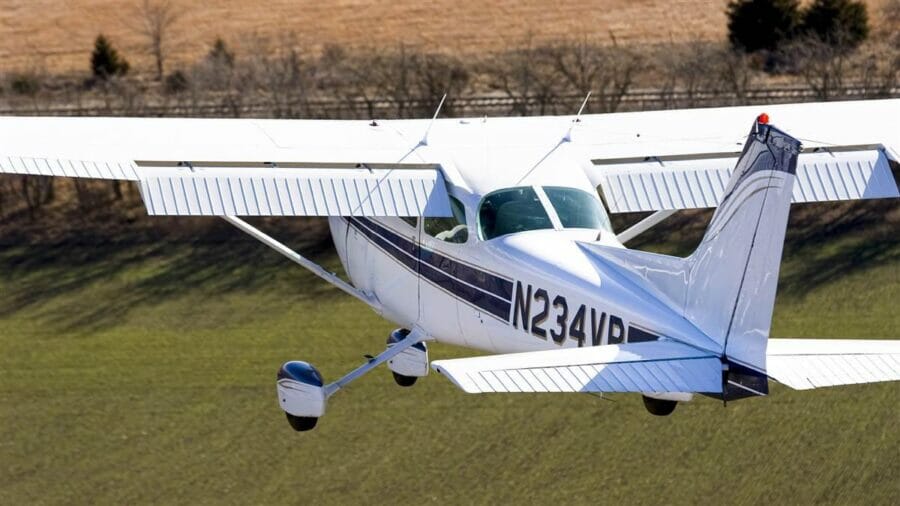 This one of the most common types of flaps in modern airplanes because they provide significant lift with minimal drag. Fowler flaps are installed in sections on the upper wing surface and extend rearwards on a set of rails or tracks before dropping to increase both the chord then the camber. The tracks on fowler flaps allow pilots to adjust to several extension settings for lift or drag during take-off and landing, and they increase the wing area when fully extended which is particularly useful for generating lift on large airplanes during take-off. Fowler flaps also feature slots between each flap section to produce a slot effect. They were invented in 1924 by Harian D. Fowler, an airplane engineer, and remain in use today.

Examples of airplanes using fowler flaps are the 1937 Lockheed Super Electra and many modern commercial aircraft. 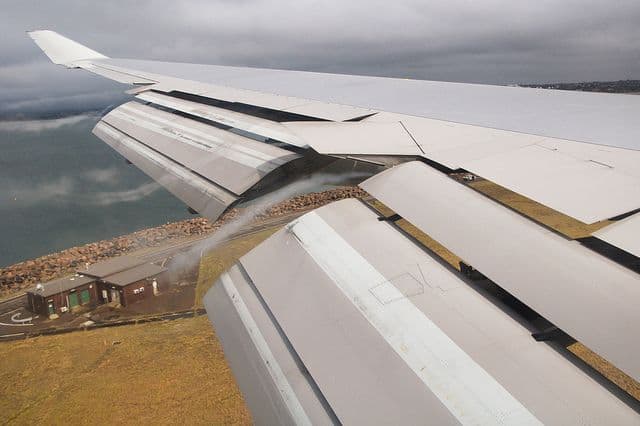 The gouge flap is an aircraft flap that extends rearwards on curved rails or tracks, forcing the wing’s trailing edge downwards to increase camber and chord. Gouge flaps allow pilots to increase the wing area and chord to reduce the aircraft’s stalling speed and achieve a shorter take-off distance at lower speeds. Invented in 1936 by Arthur Gouge for the Short Brothers, gouge flaps were only used on airplanes manufactured by the Short Brothers.

Krueger flaps, frequently spelled Krüger flaps, are high lift tools fitted to the bottom of an airplane wing’s leading edge. Krueger flaps deploy down and forwards, increasing the wing’s camber to generate more lift, and you often find them installed on swept-wing airliners. Slotted Krueger flaps have a similar aerodynamic performance to slotted flaps but with a different deployment method.

Types of airplanes using Krueger flaps include Boeing 747 and Boeing 707. 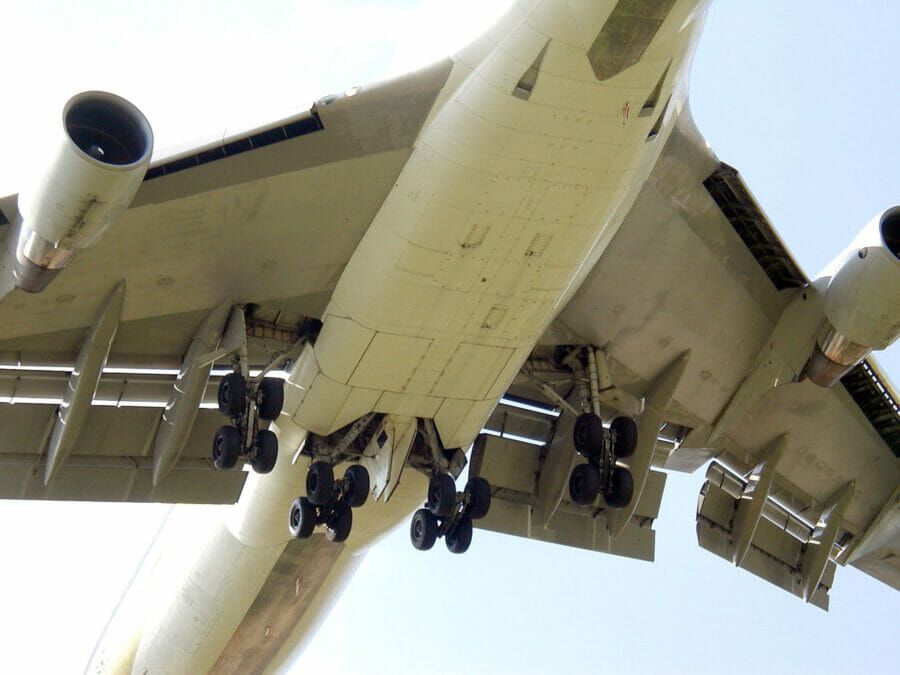 Krueger flaps deployed from the leading edge of a Boeing 747 (top left and right in photo).

This is a relatively unknown type of aircraft flap with few applications on commercial planes. It consists of a fixed track-mounted leading edge and a movable link connecting the flap at mid chord to a hinge above the rail. After the flap is released, the leading edge travels backward along the rails, forming a triangle that narrows the flap’s mechanisms forcing the shaft downwards to increase the camber and effective surface area of the wing. The outcome is increased effective wing area and higher maximum lift and drag capacity than most types of aircraft flaps.

A type of airplane fitted with zap flaps is the Northrop P-61 Black Widow. 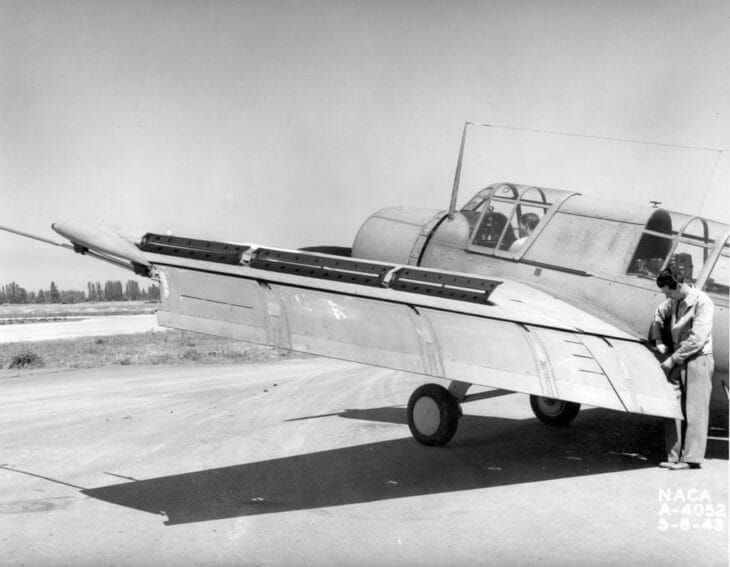 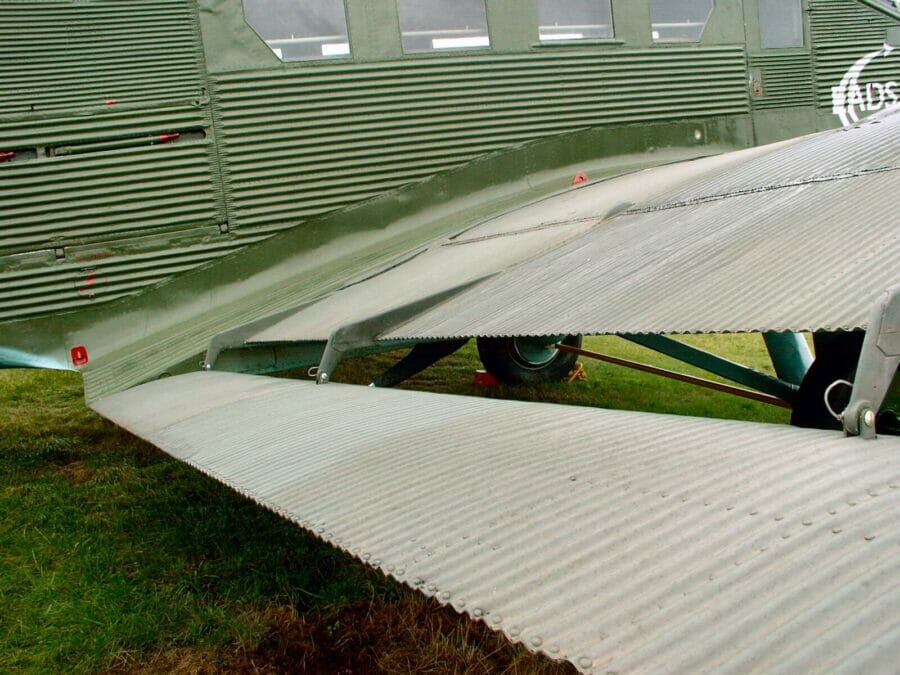 Examples of the blown flap include:

Examples of aircraft using blown flaps include the Lockheed T2V SeaStar and the Boeing YC-14. 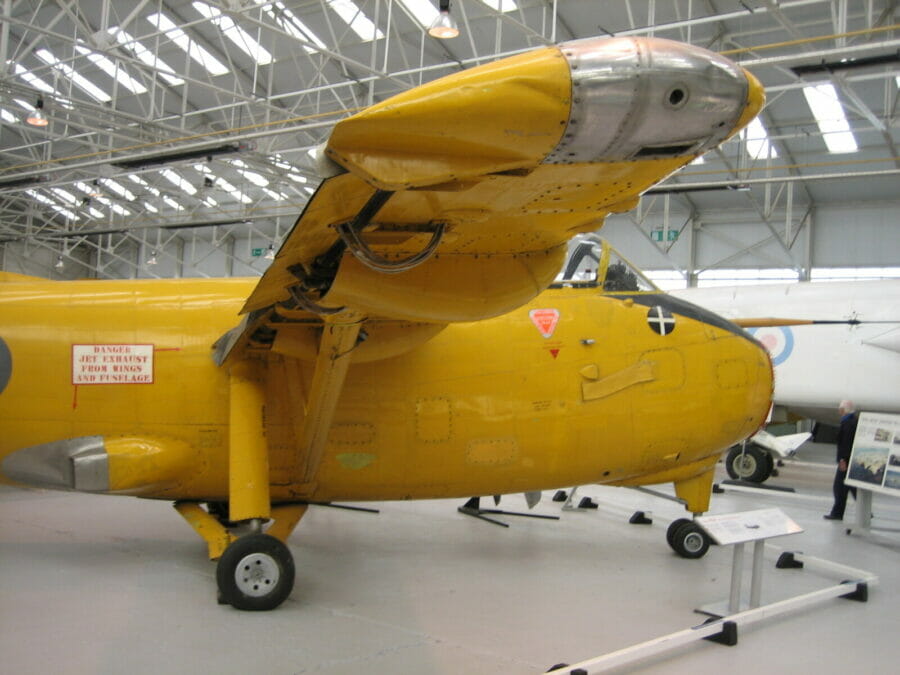 Blown flaps of the Hunting H.126

Although several excellent flap designs exist, aeronautic engineers are continuously developing more efficient types of aircraft flaps. Future airplane flaps will have improved wing aerodynamic performance compared to existing types of flaps. An example is a flexible flap that changes an airplane wing shape during flight to adjust the wing-to-drag ratio to match current flight conditions reducing noise and improving fuel efficiency. Although aviation experts reckon the technology behind the material needed to build flexible flaps does not exist yet. Don’t hold your breath because you may soon find yourself flying on an airplane with shape-shifting wings.

To recap, here’s a handy overview of the different types of airplane flaps explained above: 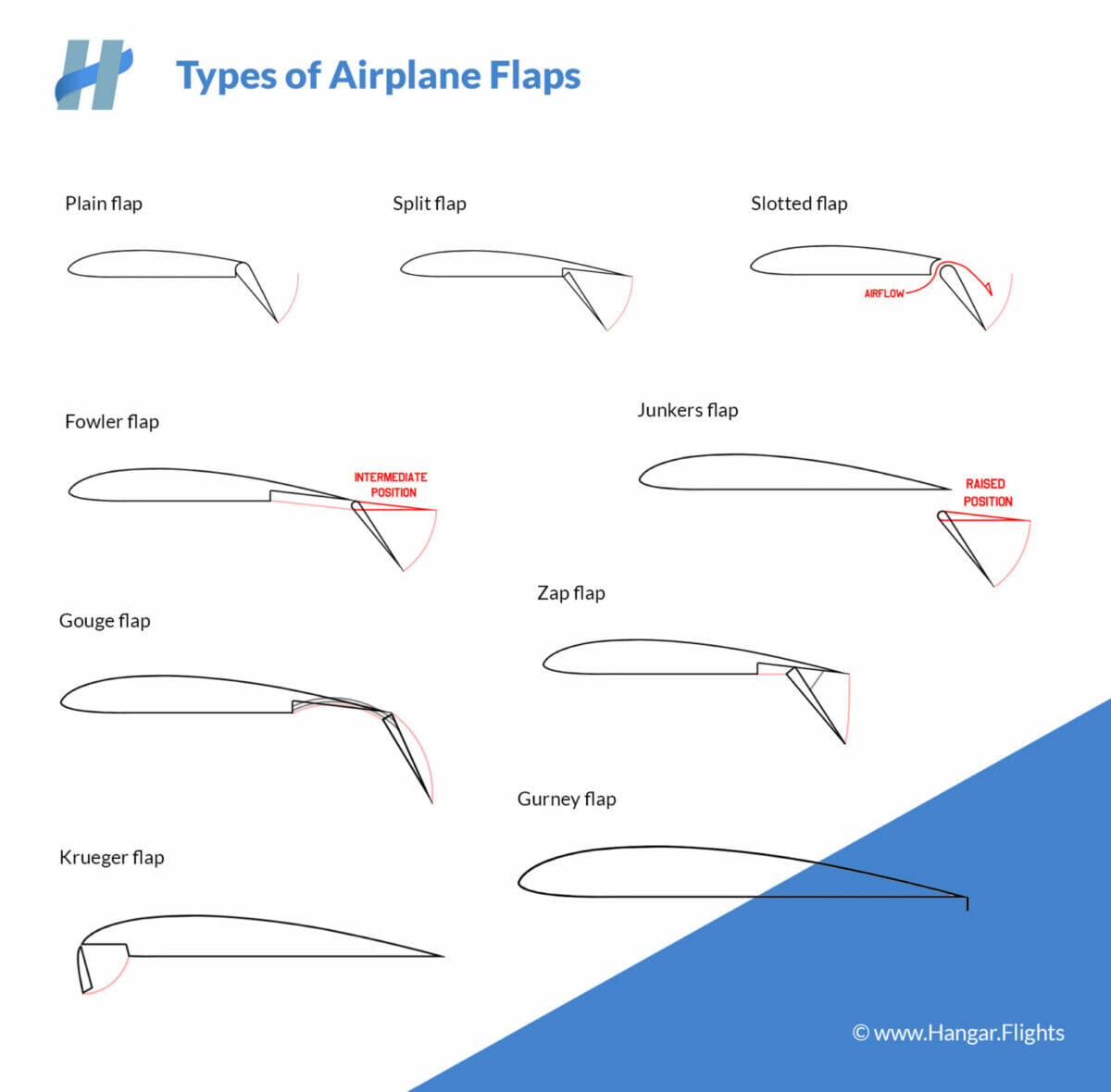 Aircraft wings are airfoils that generate lift by moving air over them, allowing a plane to get airborne...