Aviation documentaries cover various topics, including the inspiring acts of pioneer aviators and test pilots who took extraordinary risks to chart a path into the unknown. They recreate historic global air wars and the impact of military aircraft from each era on the fight for freedom. And the famous aviation inventors, engineers, and entrepreneurs who risked their health, sanity, and fortunes to create the extraordinary world of limitless opportunities afforded by air travel. 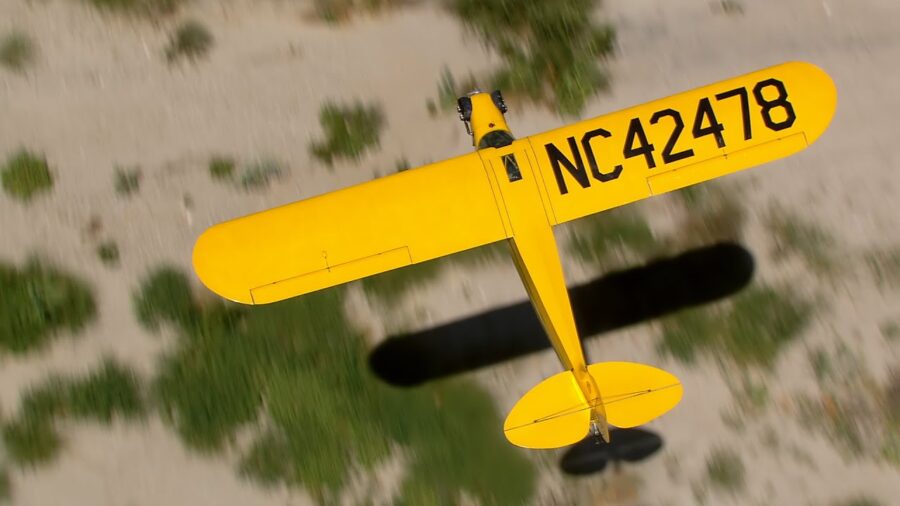 So, if you are short on ideas on what to watch, we have compiled an interesting selection of aviation documentaries on DVD and from YouTube for your next movie night.

Relive the gripping story of Wilbur and Orville Wright, the two brothers who made the first successful manned flight in this historical documentary. This beautiful documentary packs several special features following the Wright brother’s epic journey to the skies. These include rare pictures of the brothers, replicas of the Wright Flyer, and actual video footage of the brothers in flight. Narrated by legendary astronauts Neil Armstrong and John Glenn in the voices of Orville and Wilbur. Kitty Hawk: The Wright Brother’s Journey of Invention perfectly preserves the incredible origins of modern aviation for another generation.

2. Jumbo: The Plane that Changed the World

Jumbo: The Plane That Changed The World is an excellent aviation documentary about the Queen of The Skies’ bumpy liftoff. It takes viewers through the development, production, and rocky internal politics at Boeing Aircraft and Pan Am, which threatened to derail the production of the first jumbo jet and the most iconic passenger airliner in history. Watch numerous interviews with the engineers who built the 747 prototypes and hear them explain the challenges of the technology behind the aircraft. And how Boeing Aircraft gambled its entire future on developing the 747, creating an aircraft that revolutionized air travel and probably the world’s most beloved airplane.

Are you interested in similar content or airplanes by Boeing Aircraft? Check out Jumbo: The Making of the Boeing 747, a 1990s aviation documentary. Or, Dreamliner: Inside the World’s Most Anticipated Airliner, a CNBC documentary about the story of the Boeing groundbreaking airplane, the Boeing 787.

Boeing 747 Jumbo Jet The Plane that Changed the World

3. The Battle of Britain and Bomber Boys, with Colin and Ewan McGregor

Ex-British fighter pilot Colin McGregor and his movie star brother Ewan McGregor teamed up to produce The Battle of Britain and Bomber Boys. Both historical aviation documentaries tell the gripping war stories of British bomber squadrons during World War 2 and pay tribute to their sacrifice over enemy territory. Special features in the documentaries include interviews with surviving veterans and excellent color archive footage of Lancaster bombers in action during the Second World War. Viewers also get to watch Colin McGregor’s attempt to fly a Spitfire in The Battle of Britain and the brother’s flight in a Lancaster at the end of the Bomber Boys. The Battle of Britain and Bomber Boys is an interesting work and is guaranteed to provide kicks for aviation buffs and historians.

A Supersonic Story unveils the turbulent history behind creating the most glamorous and stylish airplane ever built, the Anglo-French supersonic Concorde. First aired by BBC 4 in 2017, the documentary unravels Concord’s story through a beautiful narration by British actress Sophie Okonedo. It features interviews with engineers who spoke about numerous technical challenges they encountered during the aircraft’s development leading to significant budget overruns that almost ended the project. Viewers learn about the acrimonious French and British infighting over Concorde’s spelling and get a glimpse of archive footage of the British royal family, celebrities, and other glamorous passengers of the dream in the sky.

Watch the legendary U.S Air Force test pilot Chuck Yeager break the sound barrier in the “Glamorous Glennis,” the Bell X-1 experimental airplane named after his wife in Speed Machines: Breaking the Sound Barrier. The Timeline documentary details the dedication and hard work preceding the 1947 achievement, including several interviews with the people involved in the project and rare color footage of the Bell X-1 aircraft’s first supersonic flight.

The SR-71 Blackbird documentary is another excellent aviation documentary for lovers of fast airplanes. It features several incredible footages and fascinating technical details of the Lockheed Skunk Works project, including interviews with SR-71 pilots like Major Brian Shul.

This is more about the geopolitics behind global trade than the technology behind the massive airplanes manufactured by the two largest airplane manufacturers. But if you are into international business deals and the power of high-stakes corporate politics, then Airbus Vs. Boeing: The Jumbo Jet Race provides tons of entertainment. This excellent aviation documentary explains the rivalry between Boeing’s quest to dominate the super-jumbo market and Airbus’s efforts to prevent it with their A380 airliner. We knew who won the war but watching Airbus Vs. Boeing: The Jumbo Jet Race is worth watching for its interesting insights into the desperate drama behind the scenes.

7. Miracle of the Hudson Plane Crash

Everyone loves a feel-good story, and that is what the Miracle of the Hudson Plane Crash is all about. This remarkable aviation documentary offers viewers a breathtaking minute-by-minute account of the US Airways Flight 1549 ‘miracle landing’ on the Hudson River with 155 passengers moments after losing both engines to a bird strike shortly after takeoff. It features exclusive interviews with rescue crews and the compelling testimonies of several passengers who recount the feelings of terror and helplessness during the most terrifying phase of their lives.

You can also check Errol Morris’ Leaving the Earth, a gripping documentary on Denis Fitch, a United Airlines pilot and passenger on the doomed United Airlines Flight 232 crash in 1989.

One Six Right is one of the most significant aviation documentaries ever produced for a good reason. It offers viewers the most realistic portrayal of airport operations and the general aviation industry ever captured on film. If you are interested in learning the workings of a modern airport, pick up a copy of this groundbreaking documentary and be amazed.

Explore legendary military aircraft like the F22 Raptor, Sopwith Camel, Harrier Jump Jet, and the P-51 Mustang in this extraordinary aviation documentary on modern-age warfare. Warbird fans and fighter jet enthusiasts will love the rare archival footage and expert interviews on how advancements in military aircraft technology have changed the battlefield today.

Also of particular interest is The B-2 Stealth Bomber: America’s Deadliest Weapon, a behind-the-scenes aviation documentary on the B-2 bomber.

23 of the Best Aviation Movies of All Times

What makes a good movie? I would argue, one with airplanes. Here are 23 of the best aviation movies of all times!