Get Your FREE eBook
All Posts Buying & Selling

Lessons Learned From a First-Time Buyer

I fulfilled a lifelong dream and purchased my first plane, a 1971 Cessna 177B “Cardinal” four years ago.  My search took two full years.  The first question I had to answer – and I won’t get into it now – was what type of airplane do I buy?  After I decided on the Cardinal, I responded to 17 online advertisements and 2 that were for sale by word of mouth.  Of those 19, I went to look at seven.  I traveled from New Jersey to California, Florida, and finally to Virginia until I found the right Cardinal for me.

Some background on me:  When I purchased my Cardinal, I had just returned to General Aviation after a 20-year hiatus.  I had about 50 hours in a Cessna 152 before I became an Air Force pilot.  Then I spent 20 years flying the C-141, T-37, T-38, and C-5 Galaxy.  Clearly most of my time in the Air Force was flying IFR in multi-place airplanes with FMS, autopilot, and lots of engines.  Although I had lots of total time, I had relatively little single engine piston time, and no ownership experience, so my novice observations my seems like common sense to many of you.

Here are some observations and lessons learned:

1.) Join a type-club for the type of airplane you are considering. The information I gained from the Cardinal Flyers Online (CFO) made me a much more well-informed buyer.  CFO had a great checklist for things to look for during a pre-buy inspection.  At the time of purchase, I had less than 10 hours in Cardinals.  Even as a novice, I was able to educate some owners and mechanics about their Cardinals from information I gained thru CFO.

2.) Every single plane I physically looked at was misrepresented in some way.  This ranged from the relatively minor (directional gyro and heading bug inop – still a $1500 repair) to the gross misrepresentation of having a different engine than advertised!  Even the airplane I purchased was listed as having complete logbooks, yet was missing several years.  A thorough review of the logs followed by a pre-buy is a must.  I would also suggest a test flight or acceptance flight with a safety pilot so you can check all of the avionics and systems while the other pilot flies.  You would be surprised how many squawks you can find on an airplane just out of annual by flying it.  One Cardinal I looked at was purchased, sight unseen, on Ebay.  There is no way I would take that gamble, but it seemed to have worked out for that particular owner.

3.) Be especially careful when looking at airplanes flown just a few hours/year.  In my purchasing experience (which is admittedly limited) these tended to have more problems than aircraft flown regularly.  Most of the airplanes I looked at were not flown very often for one reason or other, which is probably why they were for sale in the first place.  I suspect this is true of most planes on the market today.  Its something to bring into your decision-making, especially when considering making a long trip to go see a plane in person.

4.) If you are a serious buyer, be ready to pull the trigger quickly when the right plane comes along.  This means having things like financing and insurance in place.  I missed out on a couple of planes because I wasn’t 100% ready to close the deal and the planes were sold a couple of days later.  There are lots of well-informed buyers checking online sites daily who can spot value quickly.  If you find an airplane for sale by word of mouth or with a “For Sale” sign at the local airport, you might have more time, but if it is a great deal, it probably won’t last long.  I found my plane listed online on a Friday evening.  I travelled to see it on Monday and put a deposit on it that day.  I have no doubt that if I had waited a day or two, my Cardinal would be in someone else’s hanger today.

5.) Becoming good at determining value took some time for me.  The AOPA and Trade-A-Plane valuation tools are a good place to start, but in the end, a plane is only worth what someone is willing to pay.  I checked the online sites (Trade-A-Plane, Barnstormers, and Controller) daily, and after a while, was able to get a good feel for what each plane was worth.  Those priced appropriately usually sold quickly, while others remained online for years.  But you would only know that if you checked the sites daily over a long period of time.

6.) Be ready to travel to buy the plane of your dreams, especially if you are considering a rare model.  You can probably find lots of 172s or 182s within an afternoon’s car ride.  However, if you are looking for something like a Cardinal or a Comanche, you may have to travel to find the right one.  You might be waiting a long time for one to come along in your neck of the woods.  I live in New Jersey and found my plane in Virginia, about a 4 1/2 hour drive away.

7.) When going to see a plane, get to the airport early and talk to people: The mechanic on the field, the guy in the flight school, the girl behind the FBO counter. General Aviation people love to talk about airplanes…to anyone. Even strangers. And they will happily tell you everything they know about the airplane you are considering purchasing, and sometimes they’ll spill the beans on the owner! Some of the things I heard:

From a guy two hangers down: “Great guy, but he doesn’t fly much anymore. I think he leased it to the flight school a couple of years ago.”

From a mechanic who maintained the airplane: “Yeah, we’re not too nit-picky about his annual inspections. He just doesn’t put the hours on it and we like to give people a break when we can.”

And my favorite from the lady behind the FBO counter: When I asked if she knew the owner: Silence, accompanied by an eye roll. It gave me some indication of what I was in for (turned out to be the plane with the misrepresented engine).

I hope this helps any of you considering an airplane purchase.  It was a long process, but an enjoyable one. 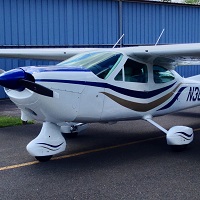